11:25 AM on 01.30.2011 (server time)    0
I really like Borderlands. It's an RPG/FPS hybrid, but the RPG stuff never gets in the way of the excellent, precise shooting controls. When it comes to RPG/FPS hybrids with tons of DLC, I vastly prefer Borderlands over Fallout 3 because I don't have to go into a pause menu to line up shots just so I can be 100% certain they hit.

I know that's not an entirely fair comparison because Borderlands leans much closer to the FPS side than RPG, but you'll get over it.

I've gotta give Gearbox props for supporting Borderlands with really good downloadable content on a fairly regular basis. The game came out in late 2009, and I'm still playing through these DLC episodes. Borderlands is a great example of DLC that keeps the title relevant long after its release: adding TONS of new missions and maps to explore, adding some genuinely funny cutscenes, raising level caps, adding some fun (?) arena battles to mess around in with friends, and tweaking the drop rate of loot to give players a better chance to get a revolver that freaking shoots six flaming bullets at once.


Oh my God, it's Christmas!

However, this game also does some stuff that REALLY clashes with the way I play RPGs. The way I play RPGs is that I do every quest. Optional quests, quests that give trivial amounts of experience/crappy items that I'll just sell, WHATEVER! If I don't see everything in an RPG I feel like I didn't really "complete it". It's part of the reason I've put 200+ hours into Persona 3: FES and still don't think I'm done with it (gotta get 100% Social Links and Compendium completion, you know).

The thing is...Borderlands throws a ton of these optional quests at you. And I took all of them. What happens is that you get overleveled VERY quickly if you don't just stick to the critical path and do story missions. By the midpoint of the Borderlands storyline, all of the quests were showing up as "Trivial" difficulty, and I had no reason to upgrade my arsenal. I was just picking up and selling everything. 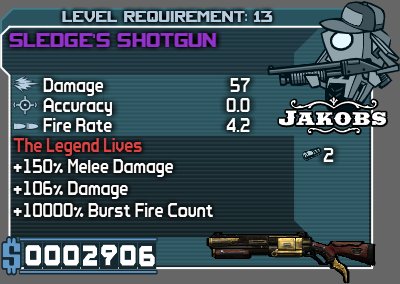 Spoilers: This is the only gun you'll ever need

I think this could've been fixed with in a few fairly easy ways.

1. The ability to delete quests from your log.
2. The ability to toggle the "New Quests are Available in X" alerts, so I'm not tempted to go do them.
3. Change the sidequest rewards so you don't get experience points from them, but unique guns/healing items/class mods instead. Healing items were pretty rare unless you bought them, it would definitely be a welcome reward.

The DLC breaks the leveling system even further. I beat Playthrough 1 of Borderlands and then went into the DLC. And it was way too easy. The enemies scale to your level a bit, but not enough. I was already slightly overleveled through all of the DLC packs I played, which is just enough to break the challenge of the game. A friend of mine did some research and told me that the best way to go through Borderlands without getting overleveled is:

1. Go through roughly half of the story mode
2. Do all of the DLC
3. Finish your story mode and start Playthrough 2

But I don't wanna do that! I wanna play whatever I want in the game without worrying about "Oh man, maybe I shouldn't do this quest because then the next story mission will be stupidly easy". The leveling system is really my biggest issue with Borderlands, and I hope the sequel fixes it.

That's not to say it completely broke the experience for me. I still really like Borderlands because it pokes me right in the part of my gamer brain that compels me to pick up and sell everything. I'm just hoping Borderworlds (calling it now) will keep the addictive looting system, excellent graphical style, and great shooter controls...but fix the leveling too.
#Community    #Rants
Login to vote this up!