In all honesty, I'd rather not be playing it. However, a friend of mine has lost his Rock Band 2 disc, so our usual online rhythm gaming sessions are a little different: we're playing Rock Band 1 while he saves up for a used Rock Band 2 disc.

"But, Sinn!" you are probably asking, in your tinny internet voices "Why would one waste his money on another Rock Band 2 disc? It's not like the sequel is much different."

Actually, I doubt anyone is saying that, I'm just using an example. I'm sure the majority of people know that Rock Band 2 is so much better than the first game that going back to the first is like eating prime rib steaks for dinner every Friday night, then having that replaced suddenly with meatloaf. I'm not knocking meatloaf. I had some good times with meatloaf. But prime rib is just more delicious.

Maybe food isn't the best metaphor, being so subjective and all. Let me explain this better with some terrible quality cellphone pictures (sorry). On Rock Band 2, you can start solo play even if you click Multiplayer. You can even use your created characters! 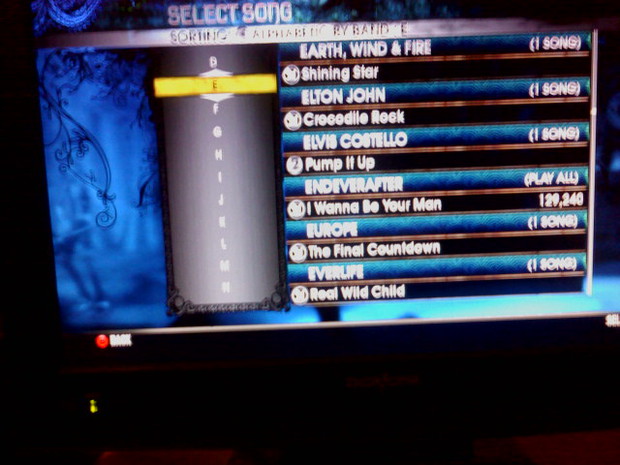 Not only does hitting RB skip me to the next band/genre/decade/location, I can hold it down and do an extremely fast skip straight to E (pictured on the left), find Europe, and start singing. Yay!

I know most people who play this game aren't as freakishly obsessive about characters as I am, but I love being able to pick my character for a song instead of sticking with the stock guys. I love being able to go into BAND quickplay as a solo player and not be blocked out. I love that every person playing during an online session gets a chance to pick a song, instead of the 'party leader' getting to choose everything.

Rock Band 2 improved on the predecessor in so many ways that I'll probably forget them as I list. Band World Tour isn't limited to bands, solo players can get in on it too (and it's online, in case you don't have any real-life friends!). Challenges and Battle of The Bands that grow as you get more downloadable songs were added. No Fail Mode made the game accessible for newbie players. Breakneck Speed was added to appease hardcore players. Drum Trainer. Hell, even Community message, semi-hidden in Rock Band 1, is on the first screen of Rock Band 2.

I know this blog is pretty much self explanatory for any Rock Band fans, but I just wanted to point out how much really was improved and why I silently raged when reading some of the 'professional' reviews. I know this won't shut up those few doucheholes from ScoreHero with their "moar like Rock Band 1.5" mentality or make IGN and GameInformer retract their "nothing has really improved" statements in their RB2 reviews, but quite frankly, I don't give a damn.

I'm just having too much fun making rectangles disappear.
#Community
Login to vote this up!