4:44 AM on 06.19.2011 (server time)    0
I use that word 'choice' with a certain degree of scepticism when it comes to Heavy Rain - generally based off my own experience of the game; Heavy Rain was a game billed as something of a revolution in terms of videogame design by it's developers, blurring the line between videogame, feature film and novel; and seemingly contriving to create a market for 'mature' content in gaming, games in which the player could interact with a 'real' world environment, with 'real' choices and 'real' consequences to those choices. Real in this sense referring to the fact that you as the player wouldn't play a fantasy character of some sort � a mage or a superhero or a space marine, but rather an ordinary person, with their own personality, their own faults and accomplishments in life. The enjoyment from Heavy Rain wouldn't come from slaughtering hordes of rampaging aliens, or conquering entire worlds or even saving the day, but rather from the consequences of the choices you make � and how well you make them. As the developers described Heavy Rain themselves:

In Heavy Rain you don't watch the story � you play it. The dynamic narrative unfolds through the players actions - not cut scenes - and every action has a consequence. The choices you make and the way you interact with other characters have repercussions throughout the storyline. With unprecedented responsibility over the fates of the game's characters, Heavy Rain is an emotional experience unlike any other as a mature game for a new world of adult gamers. 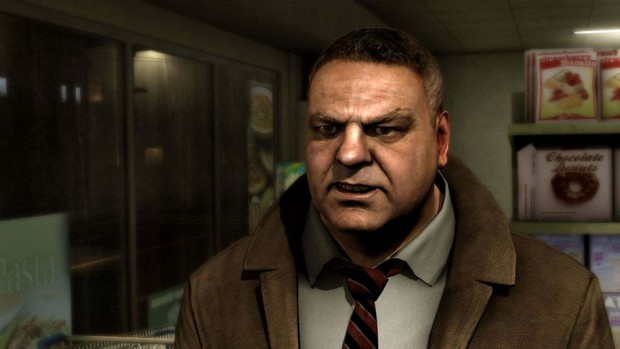 In the case of Shelby, the problem isn't so much that you aren't given a choice but rather that the moral choice is more heavily signposted than the immoral choice � rather than standing off for a second so the player can make their decision then judging them afterwards the game constantly presents the particular angle which the developers intended the game to go in � it's clear from the scene with Kramer that the positive outcome would be to help him, and not helping him would mean some sort of failure. This itself jars with the fact Shelby only reaches this opportunity of decision after shooting numerous henchman, so in effect the narrative is telling you: sure it's ok to kill but only if the guys you can't look the guy in the eye one-on-one when you do it. As the player we're given a choice between helping and not helping, but the 'right' or 'moral' choice is much more obvious and implied as the correct thing to do.

I think here arises the problem with Heavy Rain: The game does give you choice but the 'right' choice is often much more heavily signposted than any of the other choices � and this becomes a problem since if a moral choice is going to feel worthwhile it must involve some sort of trade-off, traditionally in games 'being evil' � ie doing what would be considered in life the immoral thing to do in a situation is easier (and often more fun) but leads to negative consequences in game (characters reacting badly to you for example) whereas doing the right thing is often less fun, sometimes more challenging, but eventually more beneficial because you usually get the 'good' ending. The three games I mentioned earlier are examples that all use this sort of equation, despite the differences in style, narrative and game design, to great success. Yet pushing the player toward a single line of action when they're told to make 'choices' in Heavy Rain seems something of an oxymoron � afterall the concept of choice usually involves atleast two potential avenues of possibility of largely equal value, and when a game like Heavy Rain, which is focussed on the choices a player makes and giving them free reign, instead decides that there is a 'right' path and a 'wrong' path the choice in the game ends up seeming somewhat wanton.
Login to vote this up!