4:51 AM on 07.25.2014 (server time)    0
'A Magical Dolphin Plays...' is a series of short blogs where I write in-brief about my experiences with some of the lesser known games I've played and hopefully explain a little bit about what goes on in the game and how the game feels overall, before offering my thoughts on whether or not I think the game is worth recommending to others. Hope you enjoy!

**********************
Hey there guys. Panzadolphin56 here, I haven't really written anything for awhile but having picked up a copy of 'Claire' recently on Steam I found myself with the sudden urge to write about my experience with the game. Hope you enjoy der words!

This is going to be something of an extended 'A Magical Dolphin Plays...' as I basically want to touch on the same sort of stuff I have talked about with the other short games I've played so far but also want to go into a bit more detail about the game and do a sort of mini-review of Claire, as the game itself is too big to be classed a brief experience but not something I'd consider an epic journey either. It's a relatively short game. 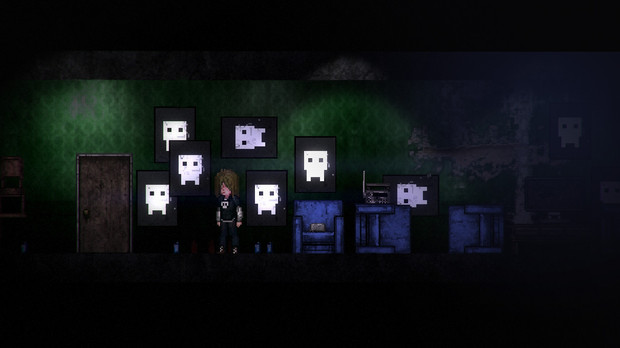 If you've got this far I can imagine you can probably guess my feelings on Claire for the most part, and honestly it may seem as though I really don't like the game, but that's not true. I did enjoy Claire a lot, and I absolutely love a lot of where Claire draws its inspiration from in terms of story, feel, atmosphere and themes. It's just that as much as I love that and feel the story was done pretty well, I can't ignore the gameplay elements, I can't ignore how lightweight the survival aspects feel, or how pointless the monster encounters are.

For me at least a really good horror game is fundamentally about a great story, it's about horrifying you by touching on very basic, very primal aspects of being human, and as much as that is about good story-telling it's also about good gameplay mechanics as well. You can't draw a player in unless they feel the way the game itself plays is a part of the way the story is put across and experienced.

In that respect I can't really recommend Claire as something everybody should play, but if you are a fan of Silent Hill, are more of a story over gameplay person and don't mind a few hours of infuriatingly trying to navigate a bizarre maze, for the price point it's at Claire might be just the game for you! Still...

Not Recommended
Login to vote this up!