Ms. Pac-Man is Back in Numskull's New Mini Machine: A Quick Unboxing and Review

At long last, I received Numskull’s Ms. Pac-Man “Quarter Arcade” machine. Designed to be a nigh-perfect replica of the original coin-op cabinet at only ¼ the size, this is the fourth release in a line that includes Galaga, Galaxian, and naturally, the ever-iconic Pac-Man. I provided a fairly detailed rundown of the Galaxian cab a couple of months back; due to time and a busy life, I’m going to be a bit more concise reviewing Pac’s second half, allowing the pics below to do most of the talking. 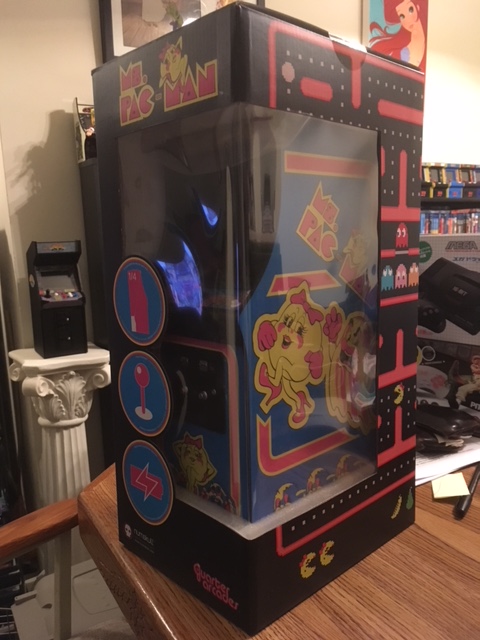 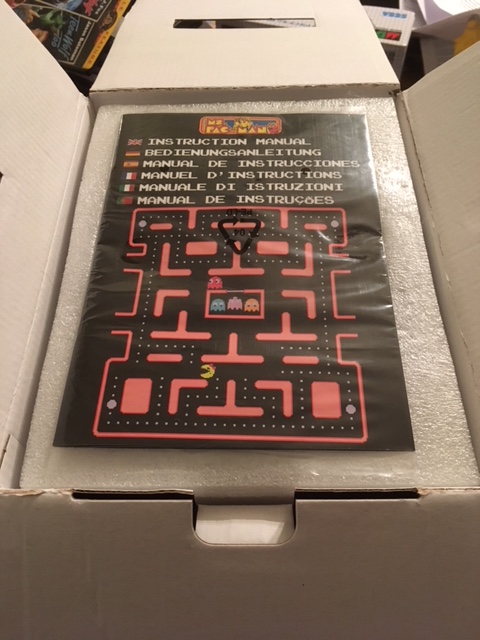 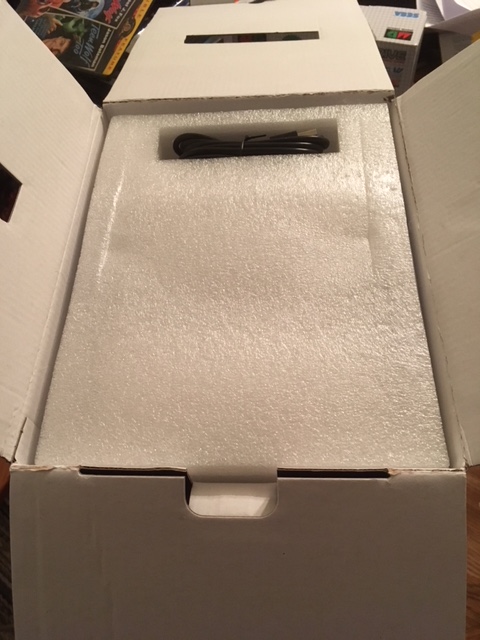 Like many of these higher-end, mini machines, Ms. Pac-Man here uses a rechargeable battery for easy portability. The included USB cable is meant primarily to recharge the unit, but can also update the system's firmware if ever necessary. 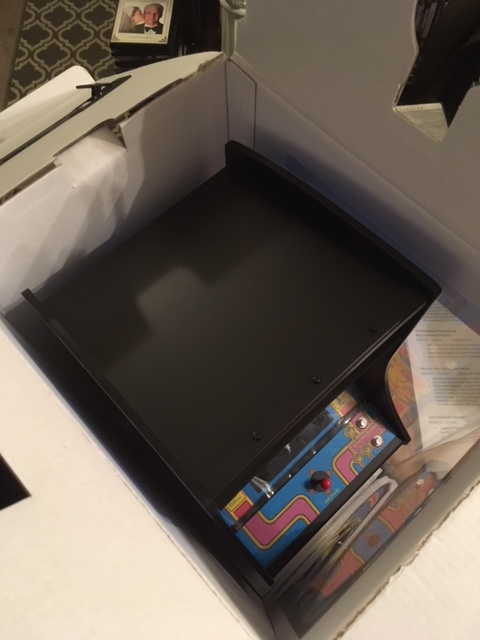 And now, the Lady in all her glory... 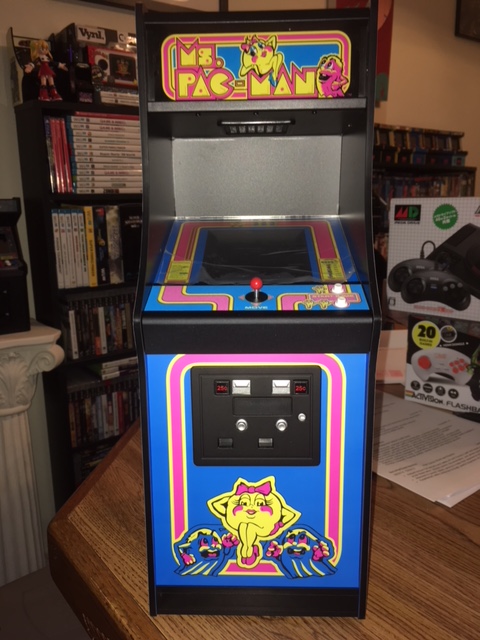 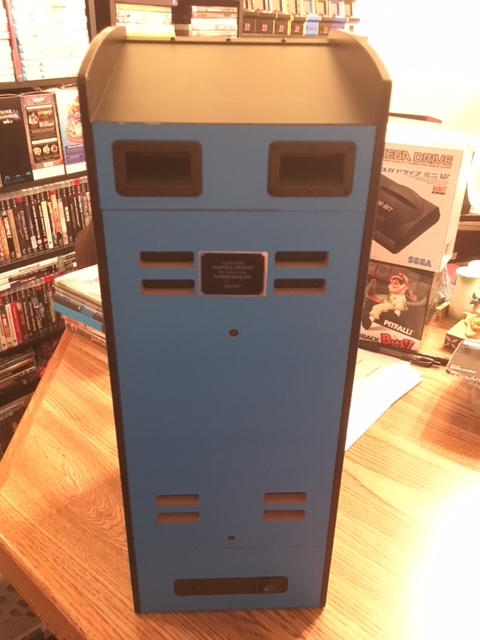 The vents are purely ornamental; Numskull included them merely to mimic the original machine. 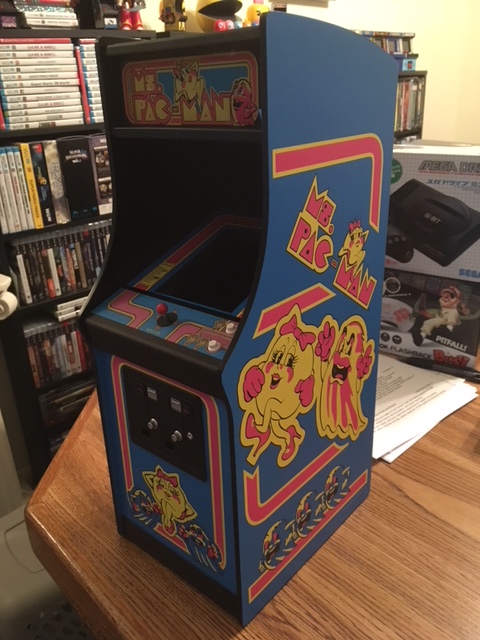 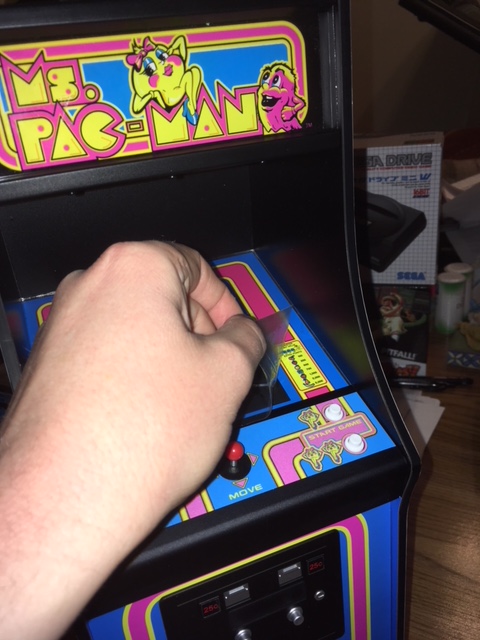 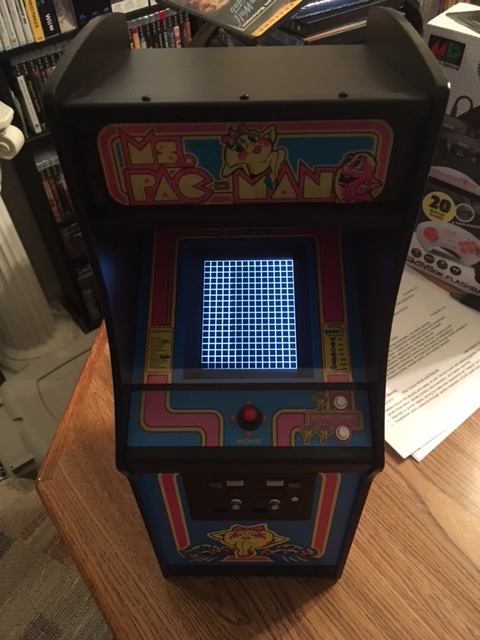 Like any proper arcade machine, Numskull's little unit goes through a frenzied boot-up sequence. The marquee was supposed to light up around this same time, but as the picture indicates, only the screen came alive. Had I gotten a defective device? 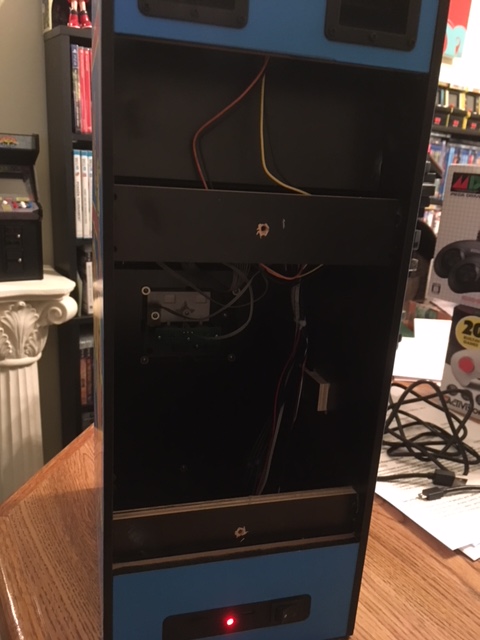 Going to the "Numskull Quarter Scale Arcades Fan Page" on Facebook, I asked whether anyone else had experienced the problem. Judging from the few who responded, I was the lone victim of this issue. Nevertheless, someone suggested I pop off the back panel and check for any loose connections. This was easier said than done, as the screws are of the Torx (star-shaped bit) variety, meaning a regular screwdriver wouldn't work. Fortunately, after doing some digging, I found one of the proper size and proceeded to unscrew the backside. Nothing seemed amiss, but I pressed down on the appropriate connectors all the same and then powered the device back on... 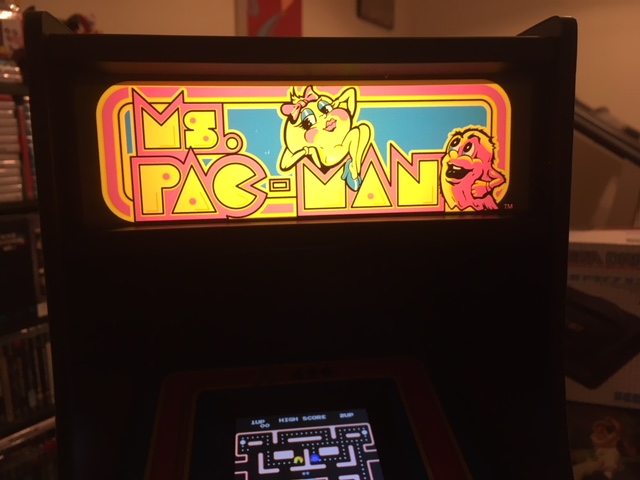 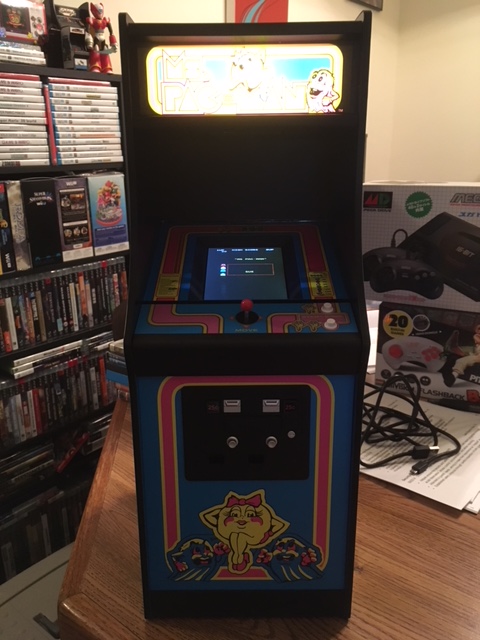 Surprisingly, that extra nudge on the cables did the trick, as the marquee now lights like any good Ms. Pac-Man cab should. That said, for anyone not willing or able to make such a fix, this shortcoming would likely bring serious disappointment. 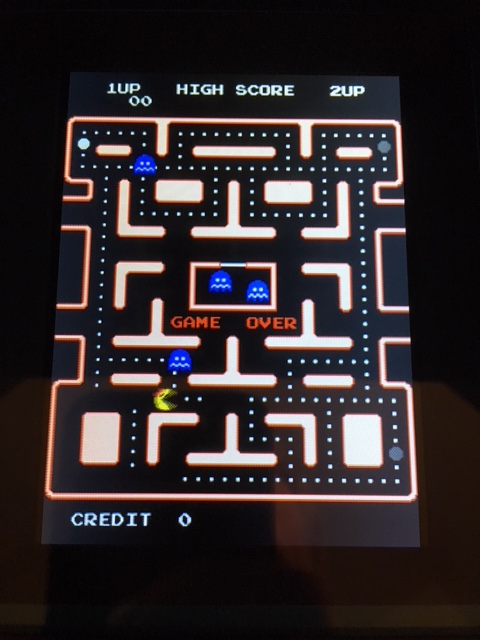 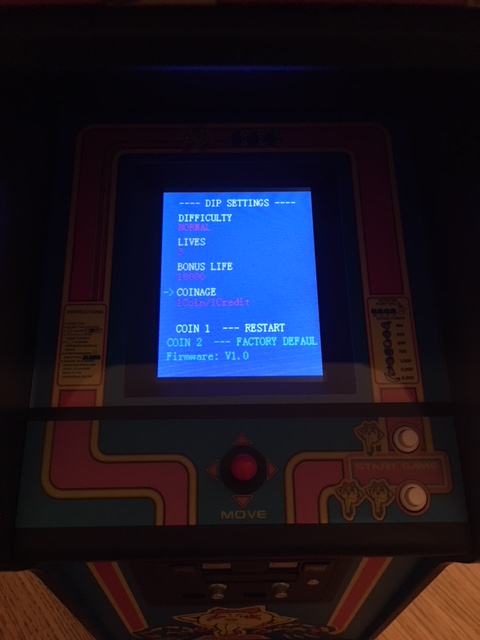 The game looks and plays well, with its simulated dip switch settings adding to the authentic feel. 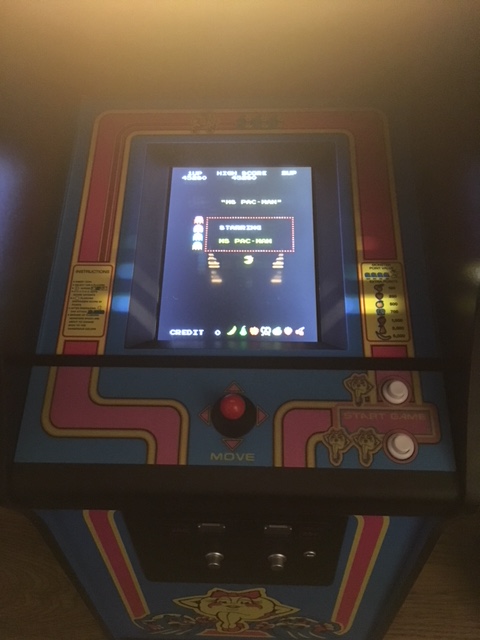 Unfortunately, we must conclude this unboxing with the machine's worst quirk--the marquee's light actually leaks through a grate positioned above the display, creating the weird, staggered glare effect seen here. I turned down the room's lights to further demonstrate the situation, but under normal conditions, the effect isn't nearly as extreme (and can be resolved with a scrap of black tape placed on the cab's inner ceiling).

Like the Galaxian cab before it, this is a wonderful display piece that honors the sometimes wacky, sometimes surreal, sometimes outlandish artistic tastes of the early arcade scene. Anyone longing for one of these eccentric set pieces will surely appreciate this device's devotion to authenticity, its space-saving size, and relatively low price point of around $150.00. Visually, it contains only one obvious flaw--the coin door doesn't light up. A curious but probably forgivable omission.

What makes the device doubly special, however, is its ability to actually play a convincing game of Ms. Pac-Man with the original arcade ROM. I could find no glaring imperfections with the tried-and-true gameplay--even glitches known to exist in the original are duplicated here. The sound, if not as robust as its big brother counterpart, is still reasonably accurate. That joystick is awfully small, though, so anyone wanting to spend hours with the Missus are advised to seek a machine more designed for furious, rugged play.

Disappointments? Outside the marquee issues and unlit coin door, the inability for the machine to save high scores is a mild bummer (although I'm told this was the case with the original unit, too.) Those hoping for a "boost" or "speed" mode for the Lady will also be let down, but again, these were not features in the original machine. I do hope Numskull will one day upgrade the display, however. While the screen is perfectly adequate and vibrant enough when faced head-on, the viewing angle is noticeably shallow otherwise.

Nevertheless, this is a fine collectible for those Pac-Man nuts wanting the very best version of Pac's better half, especially considering Arcade1UP has yet to release its own machine. For anyone seeking a kitschy, nostalgic conversation starter, then look no further than Numskull's lovingly crafted time machine.