After several delays, New Wave Toys’ Street Fighter 2 arcade miniature is finally shipping out to fans! As part of the company’s Replicade series, this long-awaited machine is third in a line of high-quality collectibles meant to both preserve and replicate that old-timey arcade experience, albeit in 1/6 scale form. This means a high-quality display, authentic arcade ROMs, a wooden exterior, faithfully reproduced artwork, and perhaps most important of all, authentic controls. Sounds too good to be true, right?

Alas, in the beginning, it sorta was. The first two releases—Centipede and Tempest, respectively—suffered a host of issues, the former sometimes undermined by a faulty battery and unreliable trackball, the latter with “clicky” dial controls that did not properly simulate the original’s smooth spinning dynamics. And considering these gizmos aren’t cheap, ranging from $120.00 to $160.00, I naturally dismissed both as unfortunate novelties.

The Street Fighter 2 attempt seemed equally problematic—why would anyone even consider squeezing a six-button layout onto such meager real estate? But the more I read about the device, the more I became intrigued. All the usual selling points were there, from the lighted marquee to full dip-switch customization, but what really regaled me were the two included micro-switch joysticks; while the first was affixed to the unit in proper fashion, the second came as a separate, mini control pad held within the rear of the unit. In other words, two-player games were possible without compromises or expensive add-ons!

Long story short, I preordered a unit. And after months of ponderous waiting, I now possess--within my hands--a Street fighter 2 Champion Edition “arcade machine” of my very own. My twelve-year-old self would never have dreamed this possible.

But is it any good? Well, I think the pics below hold the pleasant answer! (Indeed, these images speak truer than any long, wordy scrawl. However, for those wanting a more intimate, detailed account, I provide that, too, in my most recent podcast.) 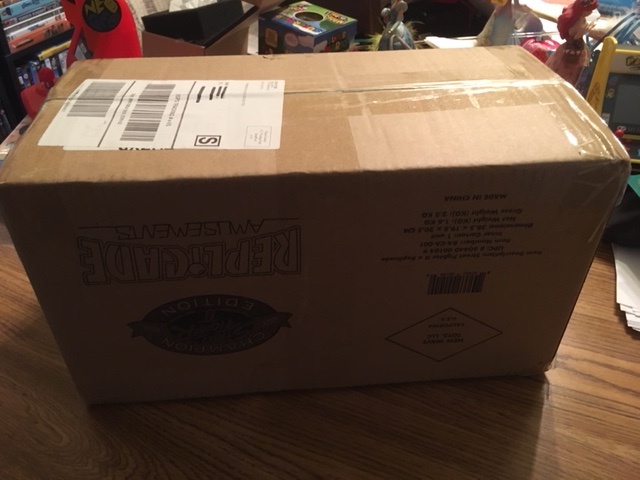 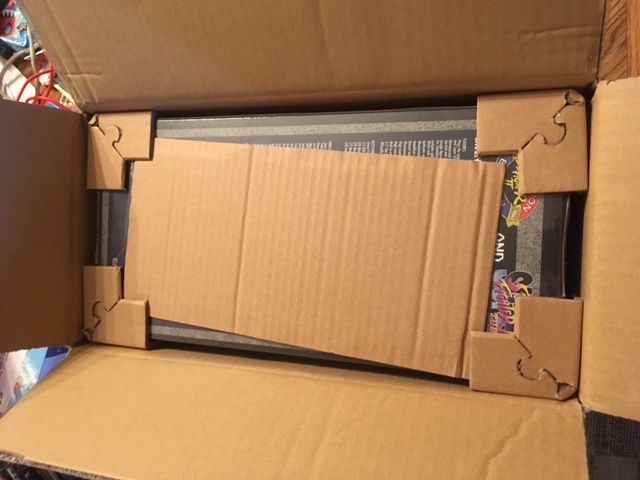 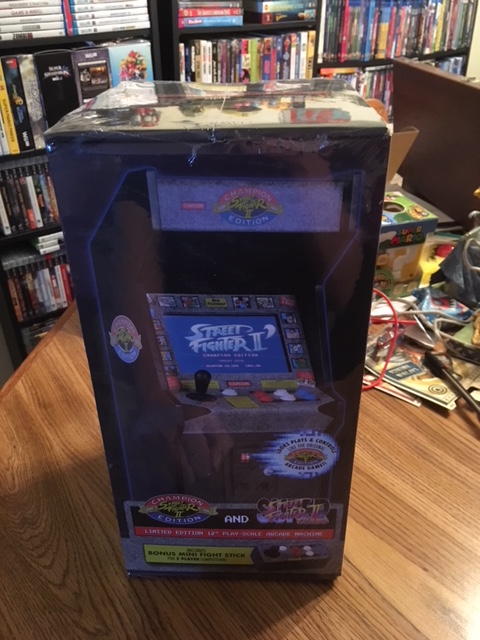 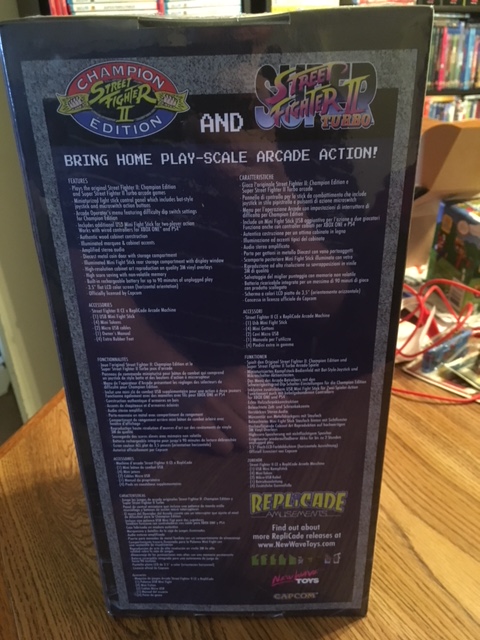 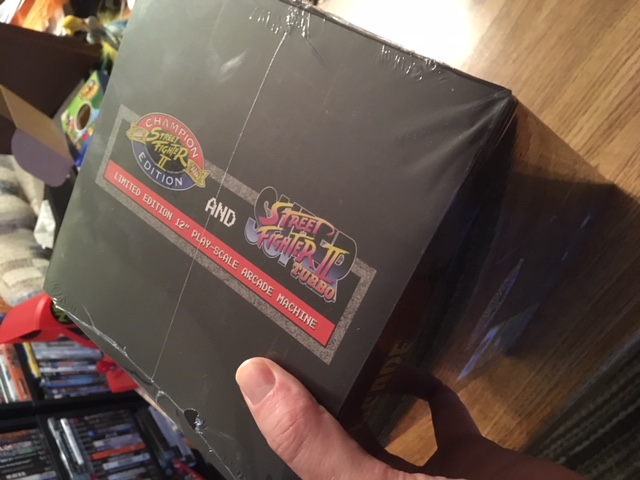 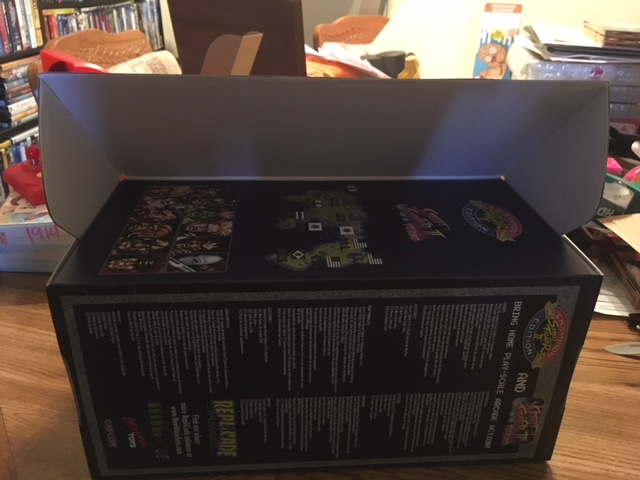 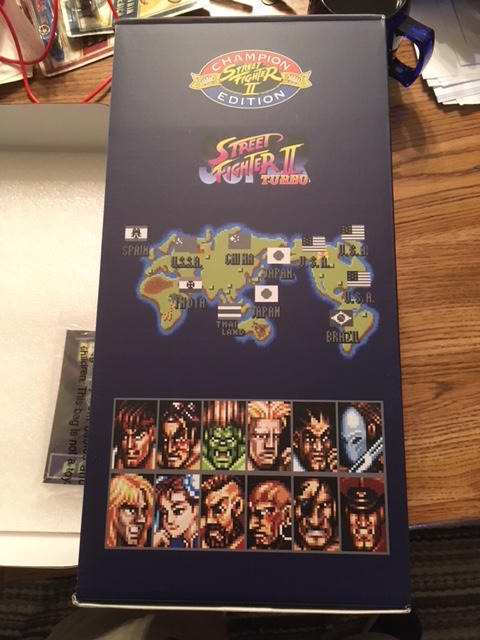 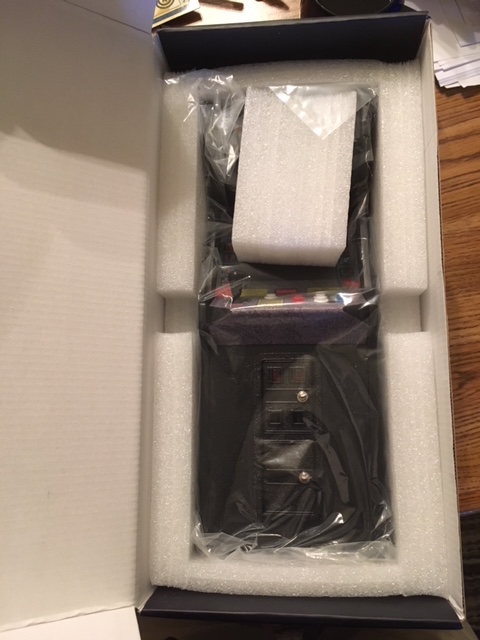 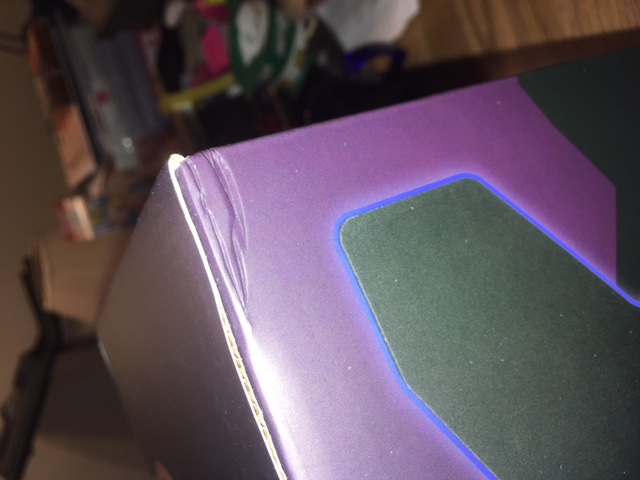 A step-by-step unboxing of the Street Fighter 2 cabinet. The packaging is generally well done, although the inner box still incurred a mashed corner at the top. Better the cardboard than the machine, I suppose. 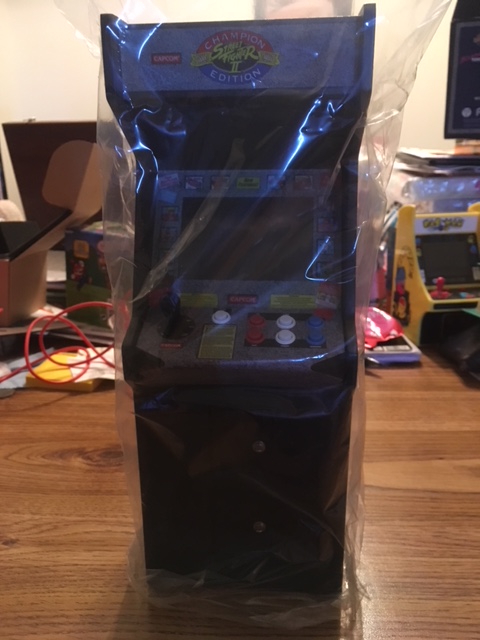 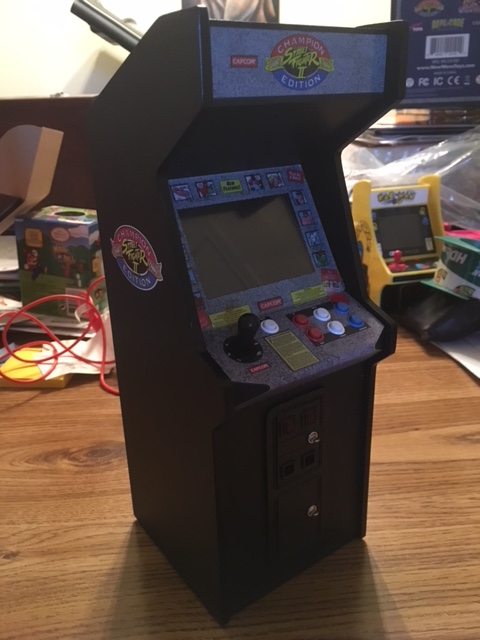 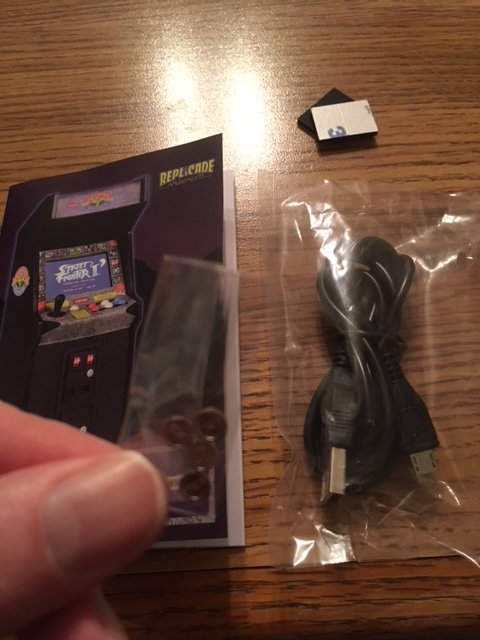 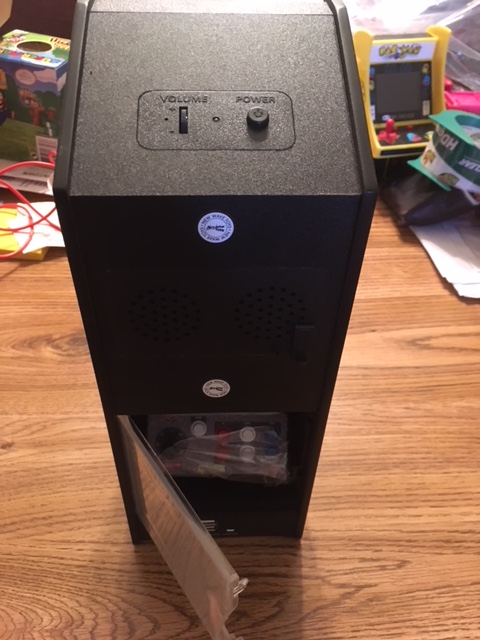 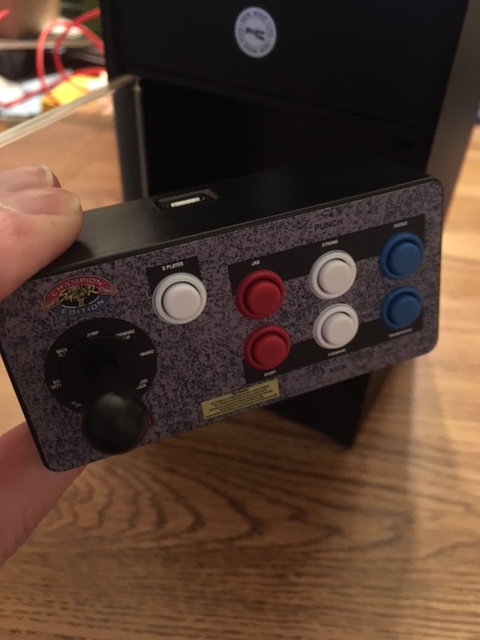 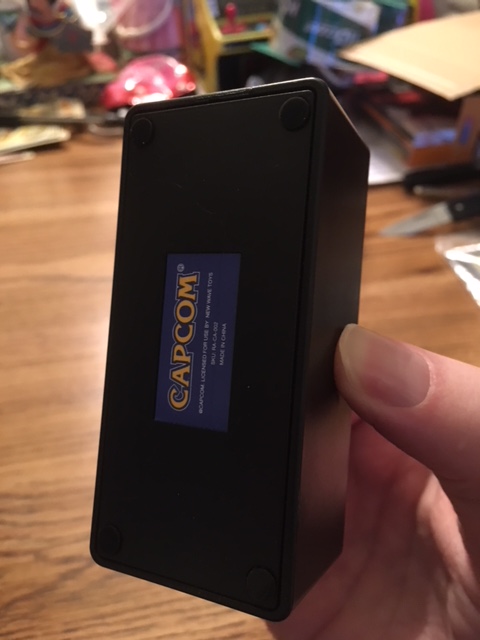 The machine itself, although smaller than initial expectations, still sports a solid, weighty feel. Interestingly, it even comes with four miniature coins, although these are purely ornamental (and honestly, rather pointless). Most impressive might be the fight stick; not only are the micro-switch controls the real deal, the entire device sports a gratifying heft when held. What's more, the backside even comes adorned with rubber feet. Huh... 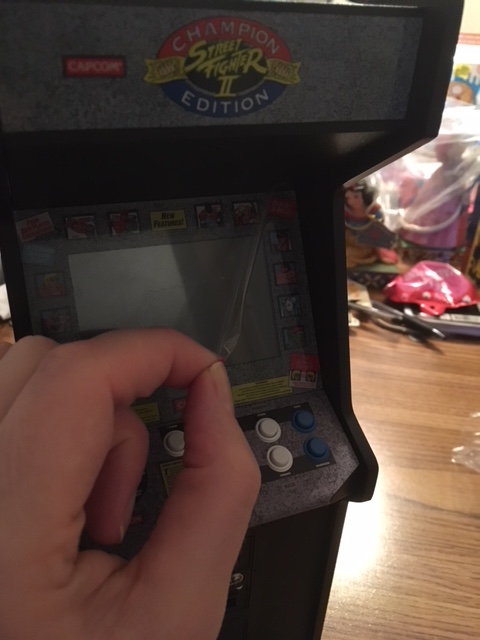 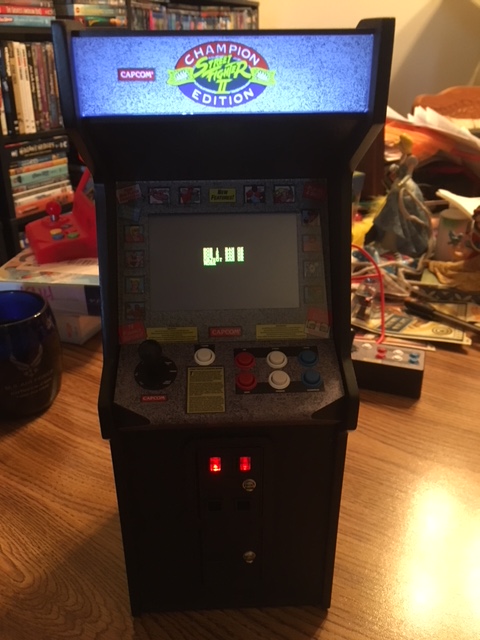 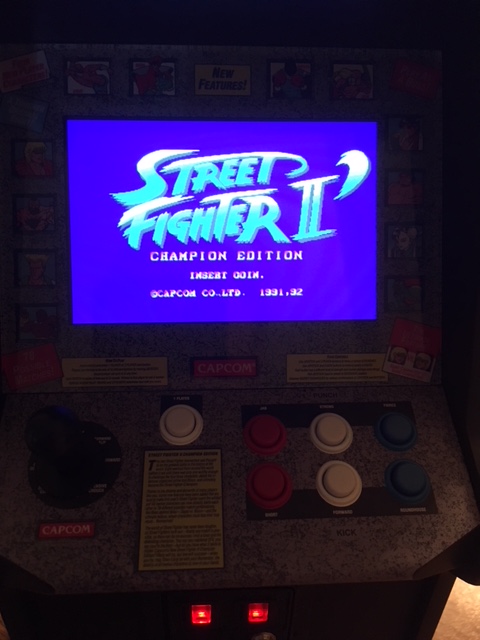 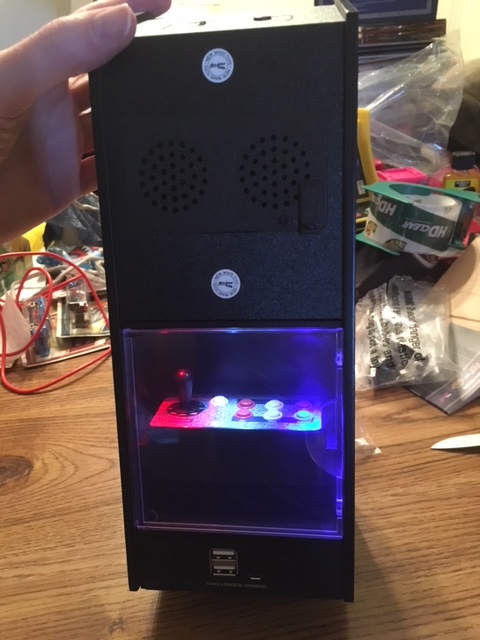 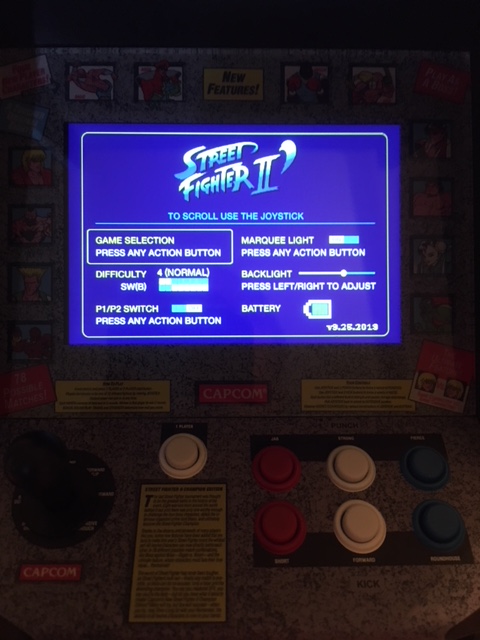 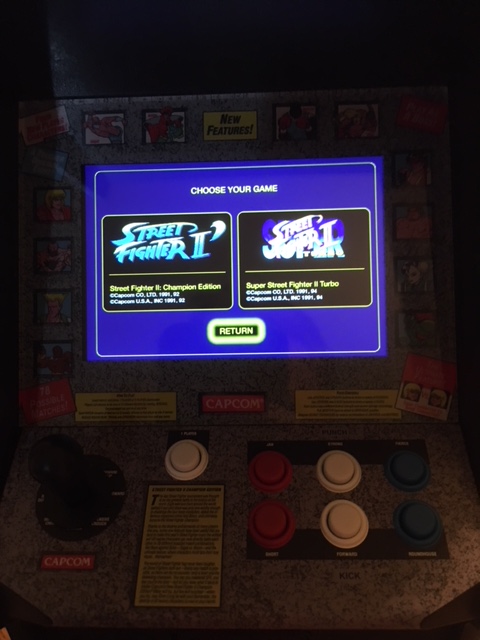 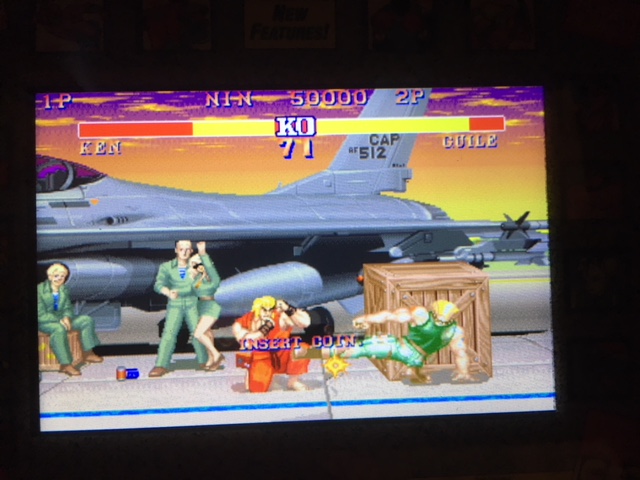 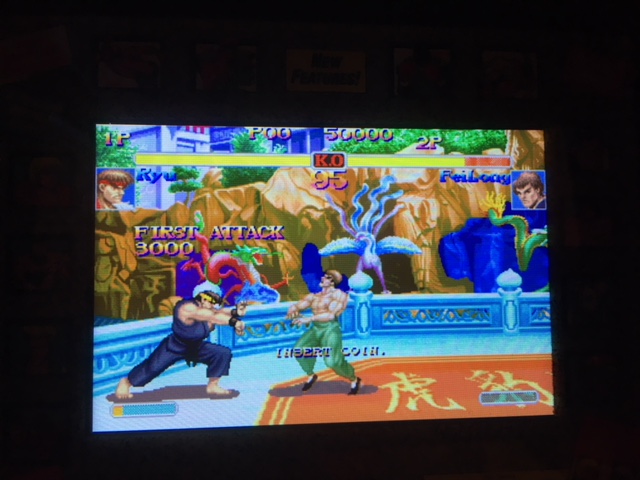 A beautiful showpiece, whether viewed from the front or the back! The display is also impressive, offering sharp, vibrant colors with no sign of ghosting or slowdown. Audio is likewise accurate and distinct. And though the unit pays tribute to the Champion Edition version of the mythos, the inclusion of Super Street Fighter 2 Turbo is a welcome extra. 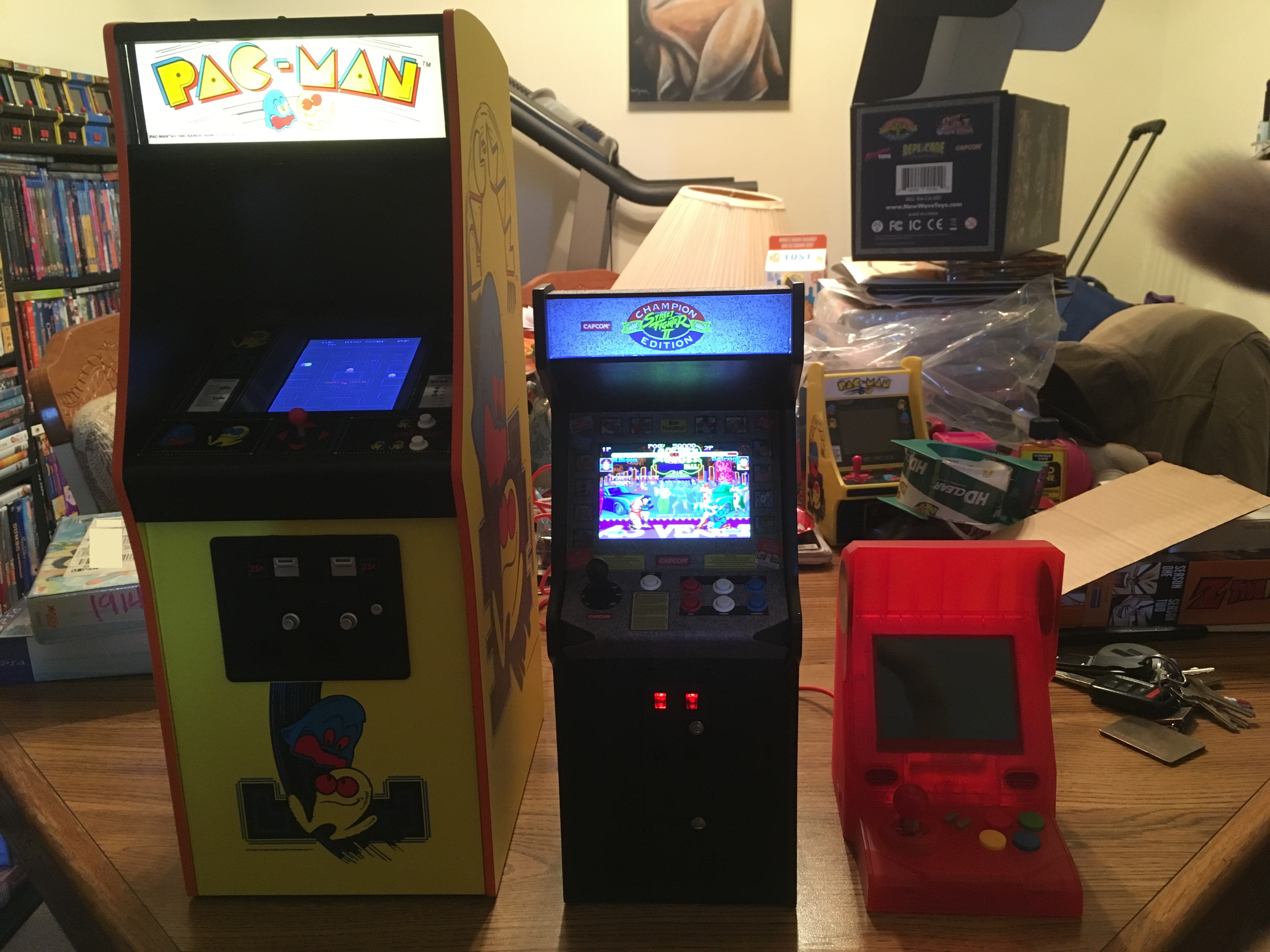 Lastly, here's the Replicade unit placed between Numskull's 1/4 scale Pac-Man cab and SNK's somewhat underwhelming Neo Geo Mini. Although I prefer the larger size of Numskull's design, that screen on the Street Fighter cab is an undeniable stunner. A champion, for sure.

If the pictures have done their job, you know I’m more than delighted with this “meager” facsimile. Indeed, it’s perhaps one of the greatest mini collectibles I have ever beheld; a device more uniquely and quintessentially Street Fighter than any that's come before. And a fine comeback for New Wave Toys.