Update 12/20/2018: After pac-king (ha!) a few more hours into this device, I've uncovered another unfortunate issue--the game will occasionally freeze when left alone in "attract" mode (the game's demo mode, essentially), forcing the player to hard reset the device. I've never encountered a problem while actually playing, but when I leave it alone, it'll sometimes freeze at random intervals, anywhere from ten minutes to two hours out (and sometimes not at all). I've contacted Geek Store, the seller and shipper of the device, and it has graciously offered to replace my unit with another come February, which is obviously awesome. Also, for those wondering, the game doesn't save high scores, a point I failed to mention before. Anyway, I'm still plenty pleased with this device all the same, but sadly, it isn't quite as "pristine" as I first thought. I suspect later units, and especially the upcoming Galaga model, will have these issues figured out. And now, feel free to read the rest of this review as originally intended!

Miniature arcade machines are all the rage these days, it seems. Indeed, I reviewed Arcade1Up’s home Pac-Man arcade cabinet over the Thanksgiving holiday, deeming the contraption both a fun nostalgic trip and conversation piece, even if the unit itself suffered from a few minor issues. And sadly, this is the common trend with these home coin-op conversions—there’s always a compromise or two hindering the final result. With the Arcade1UP Pac-Man cab, it was dirty audio and a scuffed overlay for the otherwise acceptable screen. For the My Arcade line of desktop Pac-Man cabs, it’s the fact they’re based on the inferior NES ROM of the game. For the Basic Fun! machines, it’s the cheap, almost laughable joystick.

But like a light in the dark, a British company called Numskull has risen to prominence over the last several months, promising a miniature Pac-Man cabinet flawless in both design and execution—a perfect replica, to use the company’s words, but at only 1/4 the size of the original arcade machine. Intrigued, I preordered mine months ago and finally received it last week. So...is it as impeccable and indistinguishable from its coin-op counterpart as Numskull claims? Well, see for yourself. 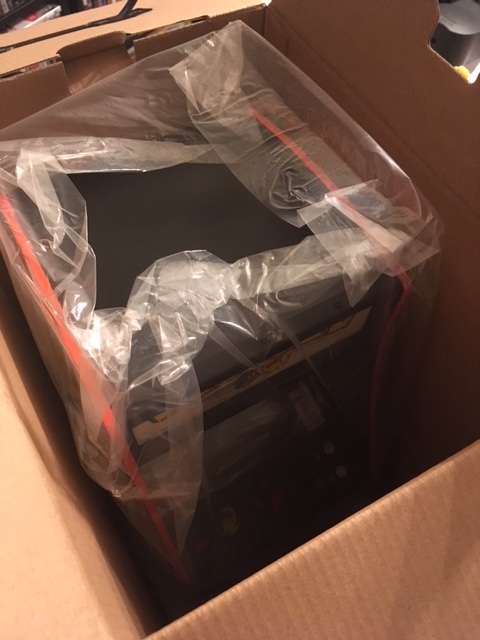 The machine arrived in this outer box with no significant padding. Yep, I was initially nervous. 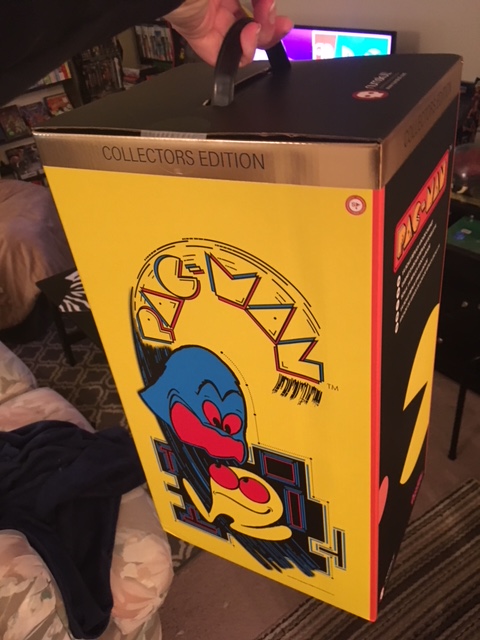 Indeed, once I yanked the "Collectors Box" out from its coffin, I noticed minor blemishes due to the rough shipping. 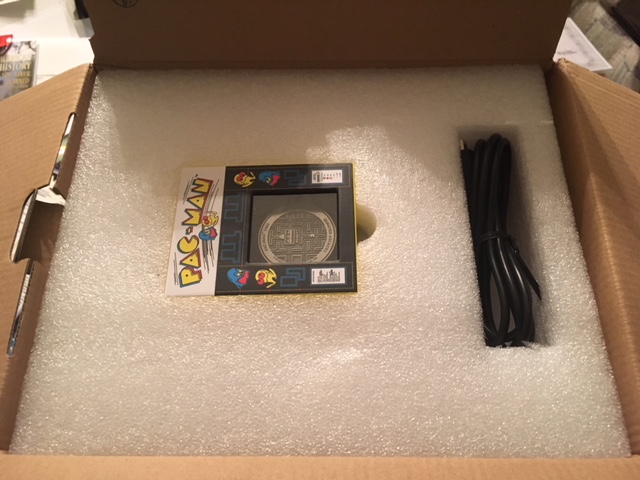 Fortunately, the inside was much more secure. Upon opening, I was greeted with a Collectors Coin, Micro USB cable... 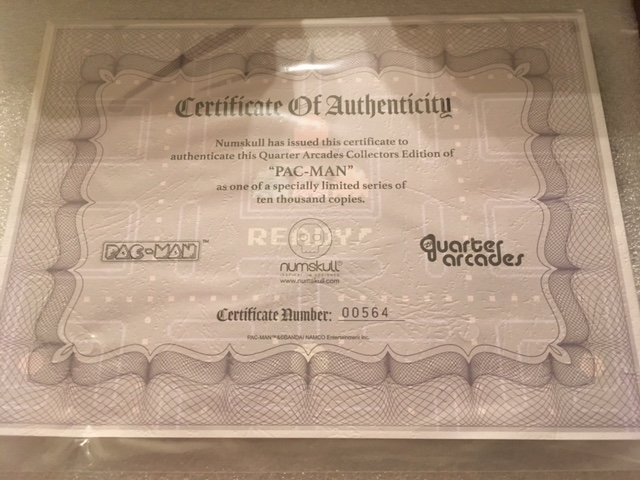 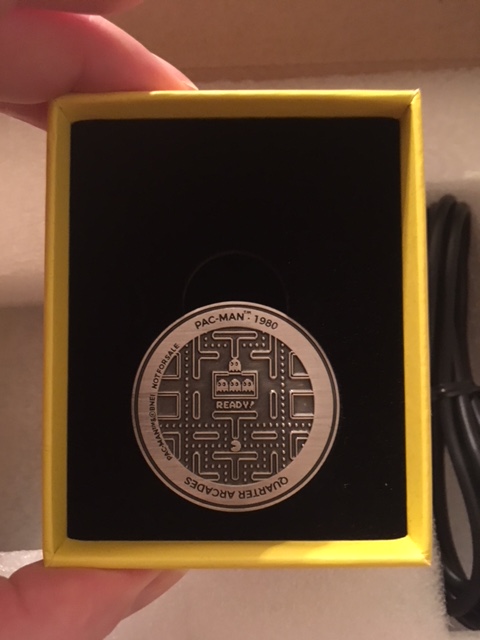 After examining these tasty appetizers, it was time for the main course. Gingerly, I unsheathed the machine from the rest of its foamy packaging... 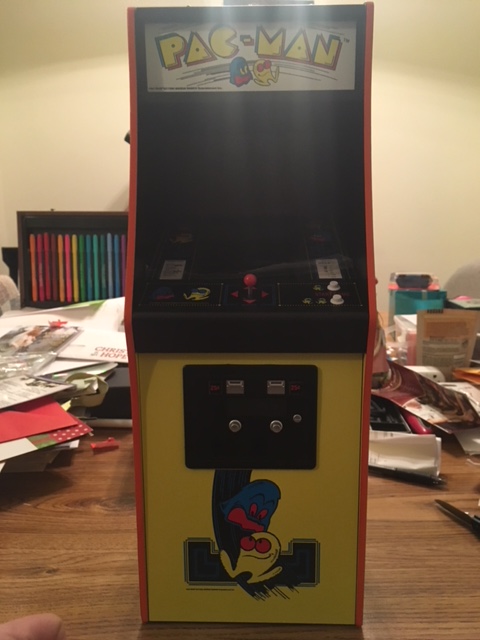 The front view. Yep, the cab is comprised almost entirely of quality wood. 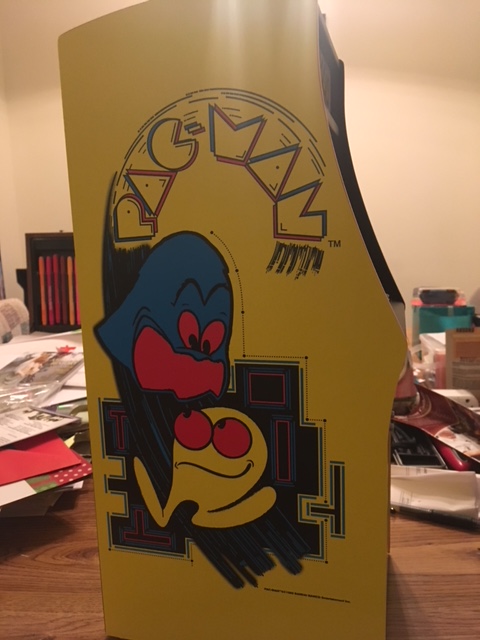 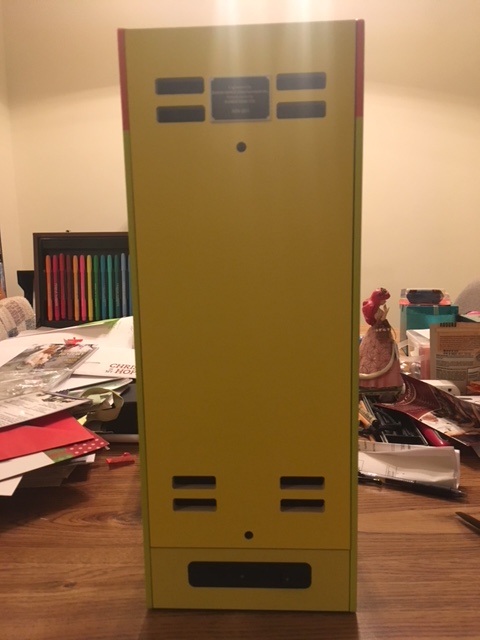 And from the rear. (The dark bar contains the power switch, volume dial, and battery light indicator.) 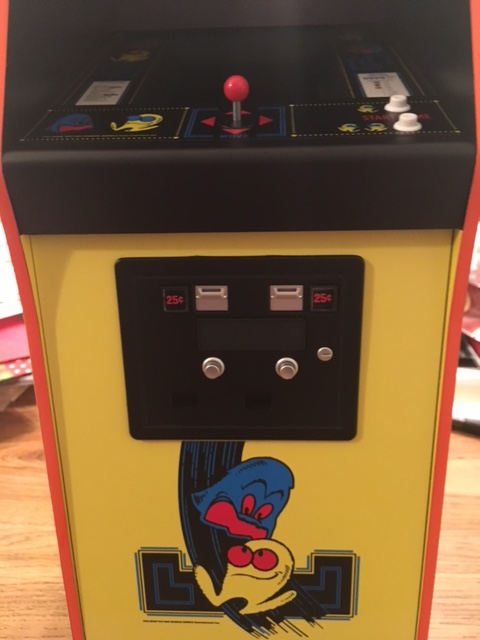 Pressing the coin release buttons adds another credit, up to 99! And yes, the door is metal (but alas, doesn't open.) 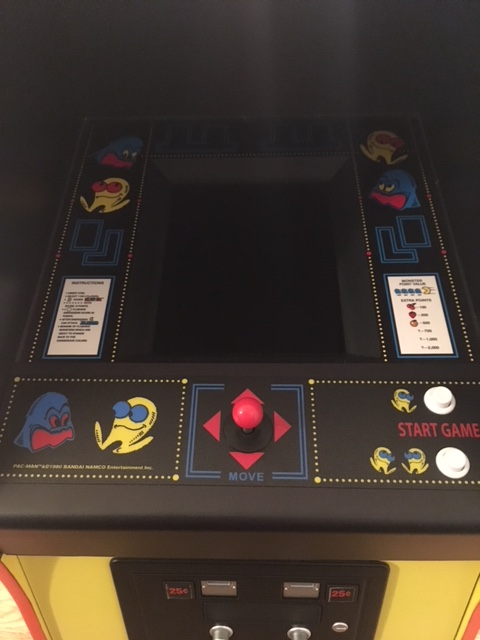 That's not a thumbtack, but a fully operational four-way joystick. 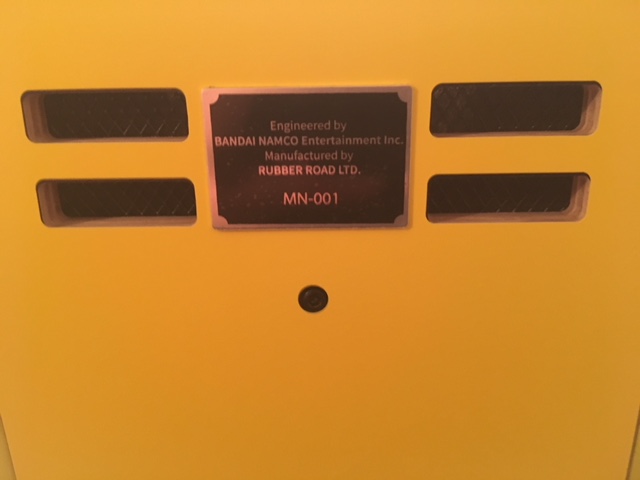 The vents here utilize an authentic mesh grating, as seen on the original, while the company nameplate is no sticker, but an actual metal slate again mirroring its inspiration. 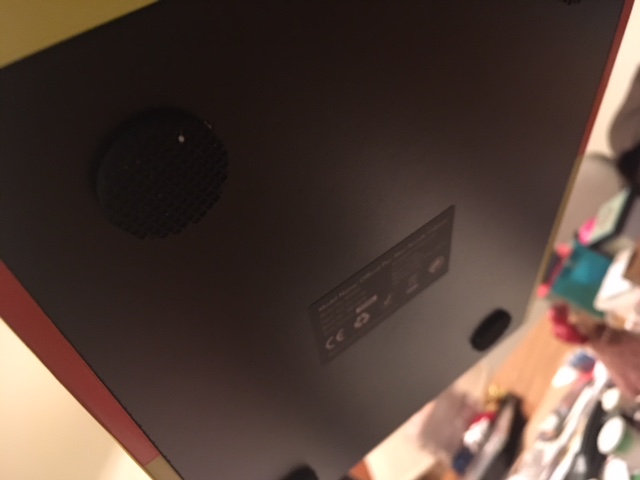 These rubber feet are probably the chintziest element of the entire cab--but they work well-enough. 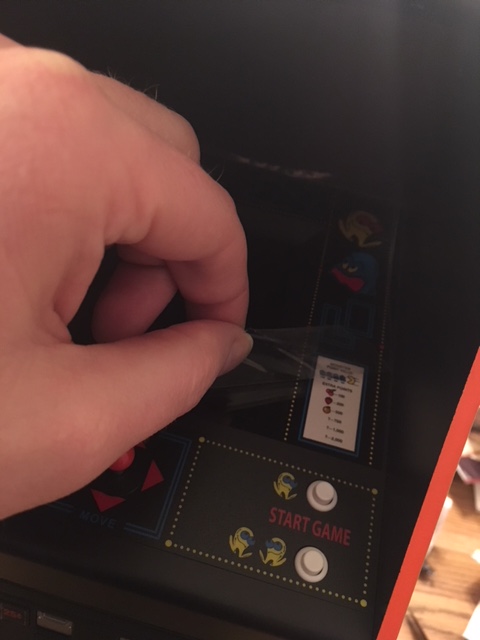 Ever get that sinking peeling? (Ha!)

After careful inspection, I found the unit to be nearly as pristine as promised; the attention to detail was astounding, with a full metal coin door, clicky joystick, even a slanted, textured surface for the control panel. And luckily, there were no readily apparent blemishes due to its presumed rocky journey from England. But the truest test was still to come. Upon the press of a nondescript switch on the unit's backside, the screen fired like a glorious nightlight... 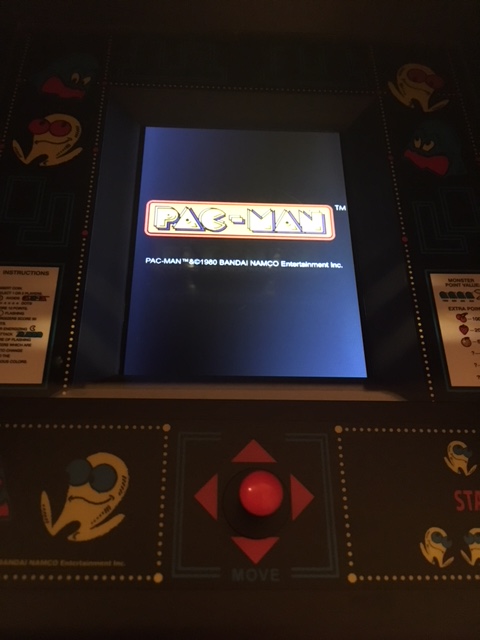 ...revealing the Numskull logo, this one, and then... 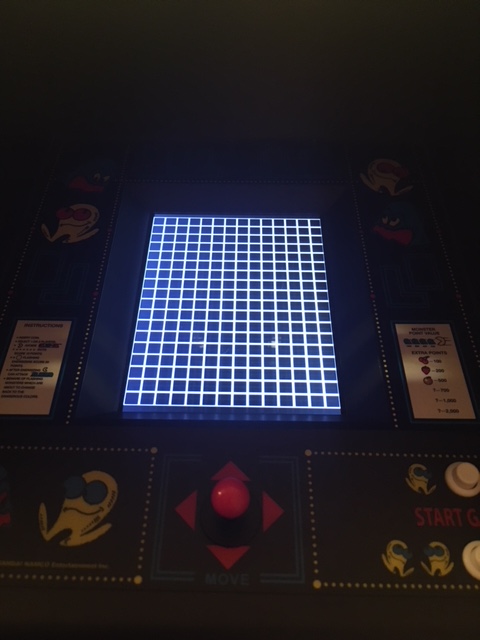 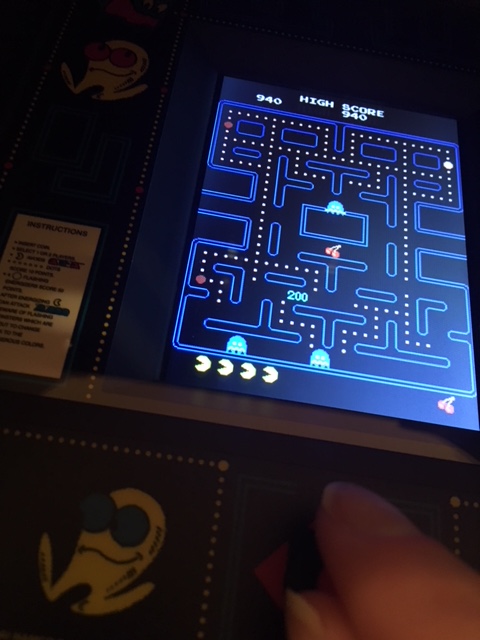 And finally, the gameplay. The clicky joystick is great despite its thumbnail size. 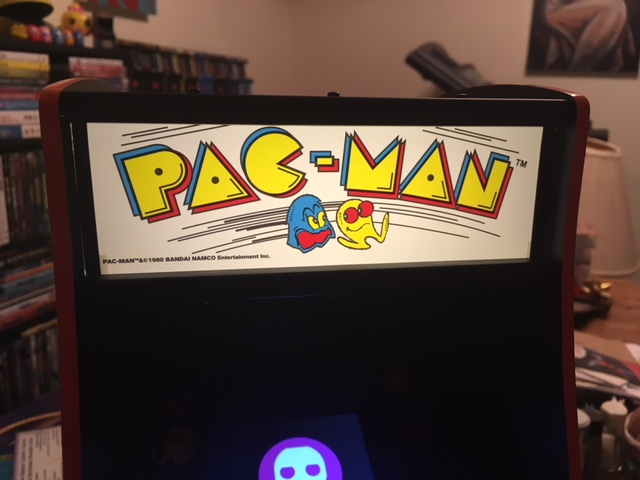 Moreover, the marquee even lights up! 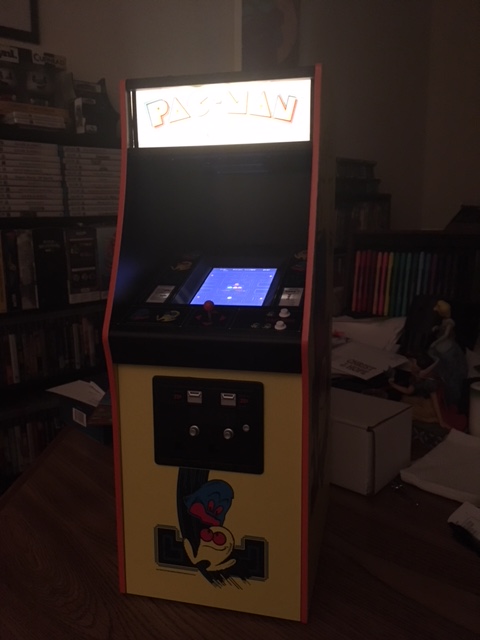 Alight at night, a true delight!

And for those curious about this gizmo’s actual height, it stands at about 17 inches. Here are some rough size comparisons: 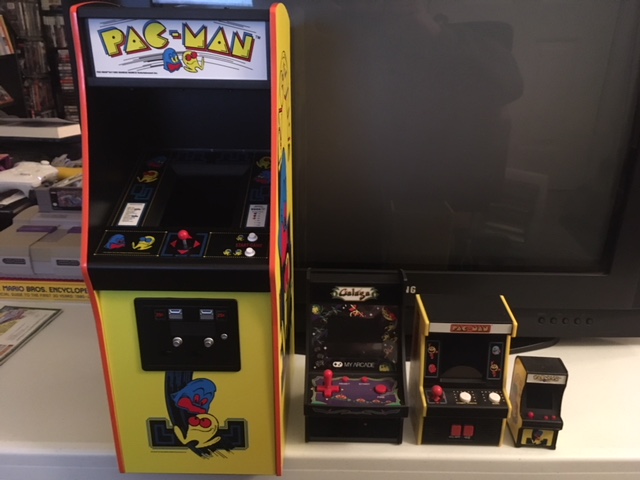 Numskull versus My Arcade, Basic Fun!, and Tiny Arcade cabinets. 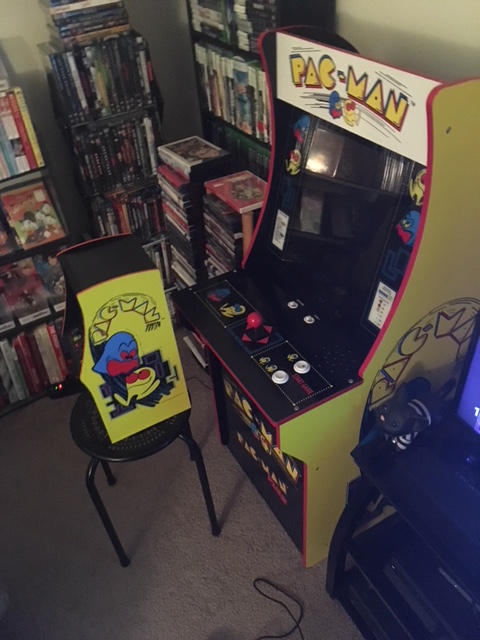 And now, Numskull's David against Arcade1Up's Goliath, from the side... 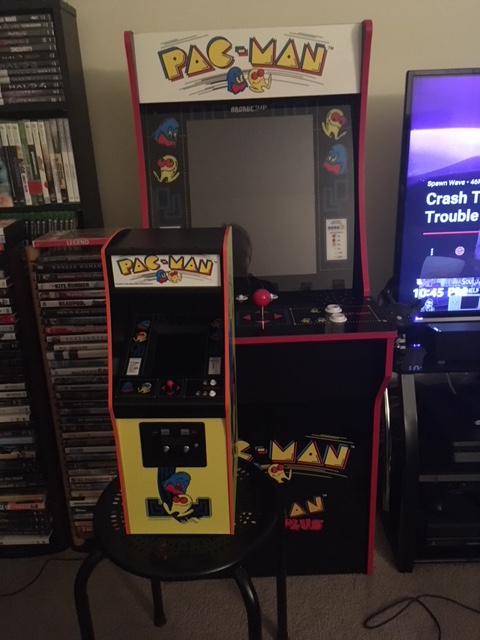 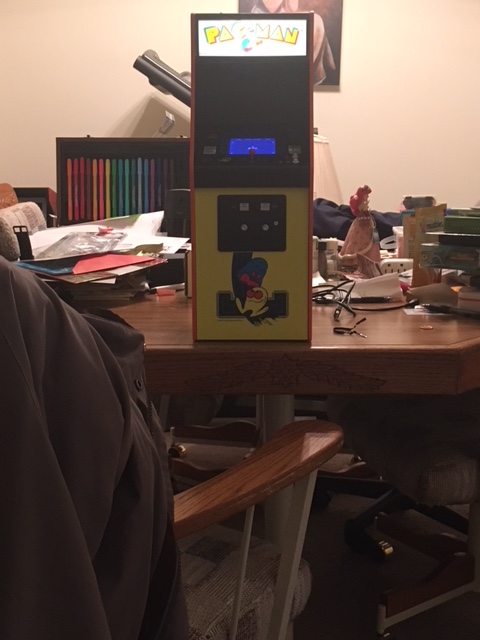 And lastly, from the distance.

So, in the final analysis, does this machine impress…or distress? Happily, I can report that I don’t regret the mean $200.00 I threw down for this thing, but the machine does have a few minor dings against it. One, for those wishing to change the game’s dip switch settings, there’s simply no option for that. Yep, gamers are relegated to the five-lives version of Pac-Man here. Second, and not surprisingly, the LCD screen can’t quite match the gentle warmth of a conventional CRT monitor. It still looks fine, especially when viewed head-on (the viewing angle isn’t great otherwise), but purists needn’t be expecting miracles here. Lastly, and perhaps worstly, the audio seems a hair less robust, a sliver shriller, than its big boy counterpart, accompanied by a seldom but ongoing background “pop” that sharp ears might detect. Alas, I only mention these very minor quirks in the name of complete objectivity—most gamers won’t notice or care—but they remain all the same.

Nevertheless, this is a must-buy for the avid Pac-Man fan and dedicated collector. Indeed, its arguably the finest Pac collectible ever conceived. But preorder fast—this is a limited-edition product, with the final batch ready to ship this February. And if Pac-Man doesn’t jazz your fancy, Numskull still has three more titles coming next year—Galaga, Ms. Pac-Man, and Galaxian. Stay tuned!

For those wanting to learn more, feel free to check out my weekly podcast. I dedicated this week’s show to this very product.