4:27 PM on 06.14.2014 (server time)    0
So a new part to me new series about all things sexy sexness in games which aren't actually about sexy sexness. Honestly the response to the first part was...mixed to say the least, but who cares. Write until I don't want to, that's how it should be. So let's keep on keeping on with part 2 of the series, where I discuss sex in The Witcher 2: Assassins of Kings. I'll try to be as spoiler-less as possible, but this is a sort of in depth look at the overarching themes of sex in the game throughout its course, so there's not much I can do about it if you're trying to avoid them. Also most likely NSFW. LET'S START! 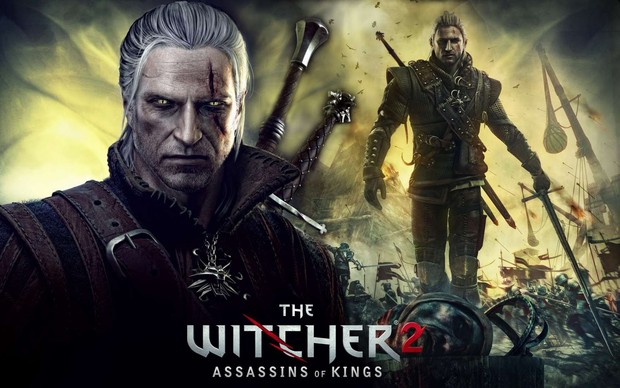 The Witcher 2: Assassins of Kings was developed by CD Projekt RED (now CD Projekt) was released in 2011, 4 years after its predecessor. It's possible sexual encounters are theoretically endless (until you run out of coin), but essentially it boils down to 5 possible direct sexual encounters as you the protagonists, along with quite a few indirect scenes as well. It doesn't do sex in the same way it was done in the first game, there are no romance cards. Instead, sex is shown through cutscenes, of varying degrees.

Where we left off, in The Witcher Geralt was having lots and lots of sex. Some people might have said too much sex. Regardless of your view on the first game, the second one starts with the morning after some sex. Perhaps he spent so much time having sex that they just wanted to show him after it. Who knows.

I'm jesting actually, the scene is done to establish the brand new relationship Geralt is in (or carried on depending on your choices from the previous game) with one sorcereress, Triss Merigold. She is the primary romance in the game, and their moments in their relationship are executed perfectly with a real sense of intimacy, something not usually or almost ever scene in videogames.  Though Triss has vanished for most of the game, doing her own 'tang', their relationship is in no way made ridiculous or one dimensional by her fawning over how much of a man Geralt is, or some other bullshit that James Bond films seem to love.

The sex scene between them is one of intimacy, of believability and dare I use the word...love. It's also three great things. It's tasteful, which is difficult to get right considering the trend between young teenagers who play RPGs and porn consumption. It's also a funny scene, with the humorous interjections from the Scoia'tael warriors and the myth involved perhaps not out of place in a Shakespearean play. Finally as well, its pretty damn sexy. While its not overly explicit, its also not exactly a shy scene, and it embraces it, rather than tries to gloss over it as quickly as possible a la Mass Effect. I'd probably go so far as to say its one of the most, if not THE most, realistic depiction of sex so far in video games. Simply put, its just a fantastically handled scene for a very well written relationship.

However one sex scene does not an analysis of the thematic themes of sex make. And for Geralt, his relationship does not necessarily imply monogamy. Polyamory was a theme which was prevalent in the last game, and toned down here it is, it is still here. Geralt can sleep with prostitutes for meaningless sex, he can have sex as a gift from an elf he saved earlier (relatively meaningless, a little uncomfortable with the whole let me gift you with sex, but hey I'm sure it happens), Geralt can sleep with a succubus in a great mini-sidequest which really challenges just how much you are willing to go for a virtual quickie. And he can also sleep with Cynthia, a Nilfgaardian spy who appears earlier (who I will talk about later) in a relatively friendly and meaningless casual encounter. It's nice to see the themes of sex again explored so liberally, and not make it the all binding contract or something else that's stupid. People have sex for many reasons, and CD Projekt have done a fine job of incorporating it. Not everyone who has sex is filled with deep and meaningful love, some people just want to get it on.

The Succubus quest in particular, is very good at this. In her very nature, she is lusty and contains a power of sex that men fall under and even go crazy over. While the evidence of her nature stacks up against her in a quest to discover who is murdering her suitors, you have to choose whether to kill one of her possibly guilty suitors, or the succubus who could easily be accused just for her nature. It is a pretty challenging quest, just because its difficult to decide who to pick.I'm sure the succubus' nature probably swayed many people both ways, either damning her or siding with her and having sex with her. Either way you never really find out, but it does raise the question of 'Is she guilty just because of who she is?'  The game doesn't judge the succubus for what she is, that's for you to decide.

On the other side of the game, if you pursue a different path, you can encounter another relationship, with main character Ves. A combatant who is part of the elite special forces of the region, but as she states, "I'm also a woman". Ves is not defined by her having a vagina, but she also doesn't act like she's not one. Although not playing this path personally (I just didn't have enough time), I tried to research it as much as I could. Ves and sex is a very different barrel though, because although she is romantically involved with Geralt, sharing fluids about midpoint through the game, she is also raped by one of the kings in exchange for her life. The game does not let you forget she is a woman either, as she is the only member of the special forces who is not murdered in a purge, and is instead raped and left. It makes a bit of misstep in my opinion then, that they send her away and promise to essentially avenge her.


It's a misstep because Ves to be honest, doesn't seem incredibly traumatised by the event (perhaps that's the failings of the voice actress). Hell maybe in this world, she isn't even incredibly traumatised. After all, Ves has been through a lot. But it seems strange for the game to just go "Your role is finished Ves, do background stuff". It proves motivation for Roche's revenge and rage, but it ignores the rage or want for revenge that Ves might have. Perhaps it didn't want to turn it into a rape revenge story, but then its just a little strange as to why they would introduce it in the first place. I guess its just essentially that it was a plot point. Which leaves a bit of a bitter taste in my mouth, because using rape as a plot point is pretty lazy, especially if the central character of the event is then sidelined.

The last thing I will talk about is actually two things. The first is that the general air of race and its 'ism' transcends into sex in the game, as characters make reference to characters of a different race in derogatory or not ways. In the first chapter, the general shitface of the town is found (on a certain path) is found to have been holding an elf hostage and have presumably forced the sex on her and made her pregnant. They deliver the child, and she kills herself in shame and rage and just wants her suffering to end. A great bit is when one of the NPC's callously shrugs the whole thing off just before she dies and just shows his disdain for the elves "I'd never even touch a she-elf". It's a deft show into how racism can get into all parts of life, even the sex. Also Saskia finding a compromise between races is also another deft example of this, and more humorous and less racist.

The final thing (Jesus this has been going on for long) is the themes of BDSM which run through the community of mages and sorceress in the game, though one is more exploited than the other. Philippa, constantly is involved in dominatrix-esque activities with her acolytes, and Dethmold (although never shown in the same way that Philippa's) has a sex slave. Honestly its just a subtle exploration of the general way the magical world seems seperate from the non-magical world in the game, especially since their world is filled by people of constant and usually unchecked ambition, it seems very natural that it would be a breeding ground for power relational sex which isn't something seen so much in other areas of the game. It's a little exploitative perhaps, and not handled in exactly the most maturest way possible, but considering the standard they have to work with, its still an interesting detail to add into the mix of already wealthy material on sex.


So honestly that's it. The Witcher 2 tackles sex in the way all games who want to use it seriously should. Multi-layered, complex and (for the most part) actually understanding what sex is. It has its faults, but in fitting with the whole game, its not perfect. It's certainly damn good though.

Thanks for reading and stay tuned for the next part, where I discuss sex and the Mass Effect Series! Any feedback would be great!
#General-Opinion/Editorial
Login to vote this up!