When I picked up Monolith Soft’s Switch re-release of Xenoblade Chronicles, I had no intention of leisurely strolling through the game. There was only one objective ringing in my mind: get to Satorl Marsh. For those of you that have played through the game’s previous iterations, you will know exactly why I was bent on reaching this area of the game so quickly. Yes, Satorl Marsh is filled with dead trees, dense fog, and is generally ugly during the day cycle. But the night? Oh man. I have yet to encounter another game where the time of day has such an impact. Trees spring to life with fluorescent blues, swept up by sparkling mists, transforming one of Xenoblade Chronicles’ most dull environments to the most dazzling. There’s just one problem with this moment in the game: dynamic resolution scaling. 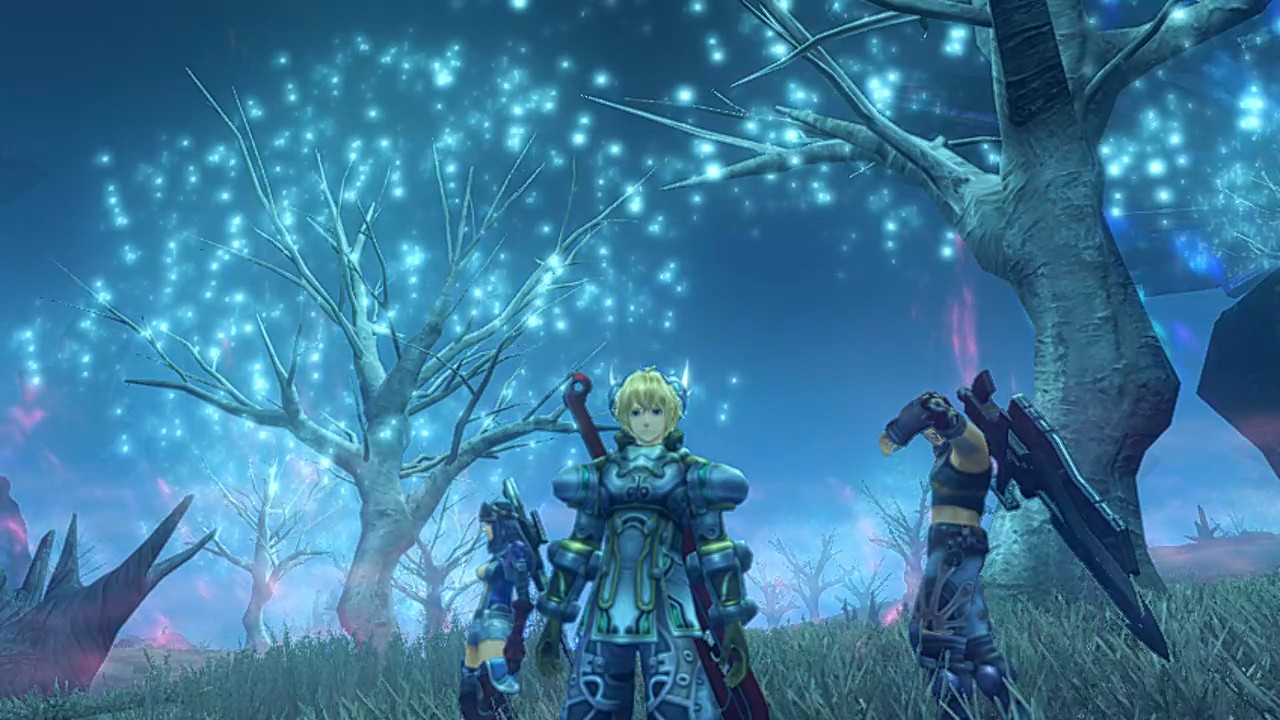 This takes me back

Dynamic resolution scaling is a way for developers to change a game’s visual fidelity on-the-fly to mitigate performance strains on the hardware it runs on. 2017’s Xenoblade Chronicles 2 made gratuitous use of this scaling technique to maintain a relatively consistent framerate on the Switch. From 720p/30fps docked and 552p/30fps to 368p handheld, XC2’s presentation could vary widely depending on how you were playing and what was on screen, often descending into smeared blurriness during boss fights and in densely populated areas. The sharpening filter applied to the game in handheld mode was particularly heavy-handed to combat this– an aspect of XC2 that led me to play the game mostly on the TV. While this resolution changing is less frequent and less noticeable in the Switch’s docked mode, the series has proved to be taxing for the system’s Tegra X1 chipset nonetheless.

Monolith Soft used a new engine with improved performance for 2018’s Torna – The Golden Country with the intention of “refining it for use in future games”, and XB:DE is the proof. With the sharpening filter and resolution jumps reduced, XB:DE is Monolith’s most graphically consistent title to date. Simply put: the problem of resolution has been largely unobtrusive. The improved character models remain reasonably sharp during cutscenes and combat sequences with environments and terrain taking on a softer look at farther draw distances. But let me be very clear here: the sub 720p resolutions in Xenoblade Chronicles Definitive Edition do not make the game “unplayable”, nor is the game unique in this regard to many other AAA titles for the Switch. Games like The Legend of Zelda: Breath of the Wild and Doom (2016) also scale resolutions when necessary, and for the latter, opt to downgrade or remove graphical effects that were present on other platforms. All this business has led some to voice concerns and complaints about the game. But for me, my thought process has been simple: I’ll just emulate it at higher resolutions later. Emulation has preserved and breathed new life into many of my favorite titles decades after their original release. Texture replacements, 60fps patches, higher rendering resolutions– you name it, emulator developers got it and then some. Drakengard 3 is an infamous example of a game saved by advances in emulation. On a technical level, its performance on actual hardware is an absolute disaster. The framerate sinks to single digits regularly, the camera loves to dive into awkward positions, and the enemy AI is both laughably bad and unexpectedly ruthless. Despite its novel approach to narrative and criticism of Japanese gaming culture, DOD3 is a game that is “unplayable” for many people, save for the few diehard fans of Nier who could trudge through its flawed gameplay experience. But here’s the kicker: nearly six years later, RPCS3’s addition of vblank frequency configuration enabled Drakengard 3 and many other games to reach a locked 60fps. Though I had initially dropped the game shortly after its release, I found myself diving into it again because extra improvements emulation had provided. 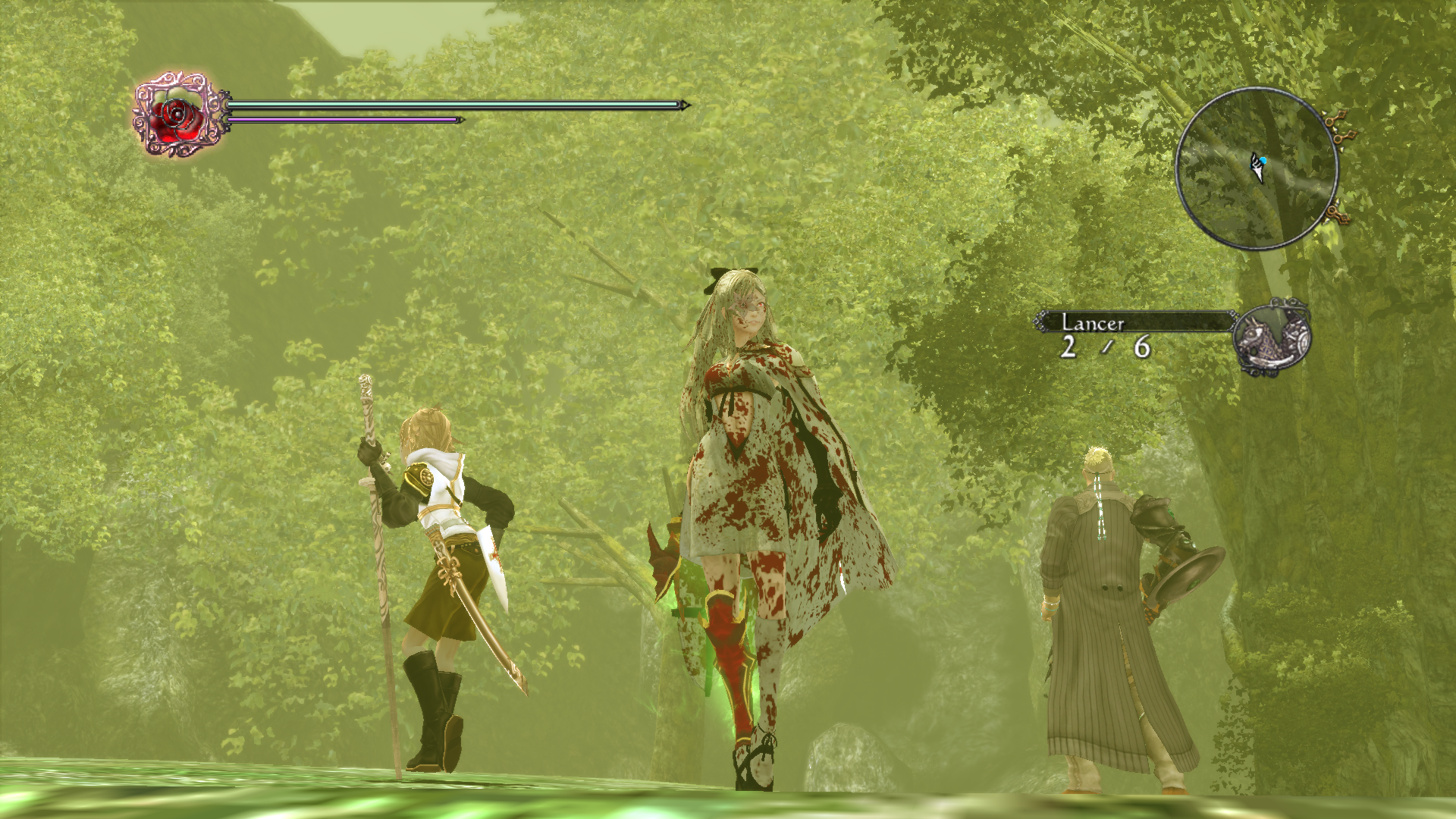 Drakengard 3 on RPCS3...I love to hate it

I approach XB:DE’s current technical shortcomings with a similar mindset. Yuzu and Ryujinx, the Switch’s sibling emulators, have made astounding progress in emulating a system which will likely be active long into the ninth generation of home consoles. How long will I have to wait to stroll through Gaur Plains in a crisp 1080p? Not very long. Nintendo’s use of off-the-shelf components has indirectly resulted in several titles being somewhat emulator-ready on day one. Pokémon Sword/Shield and Animal Crossing: New Horizons were both going in-game days after they hit shelves, albeit with a myriad of issues, and became increasingly playable in the months following. Besides the GBA, few gaming systems have had emulation this functional this quickly into their lifespan, no less in-step with the games themselves. 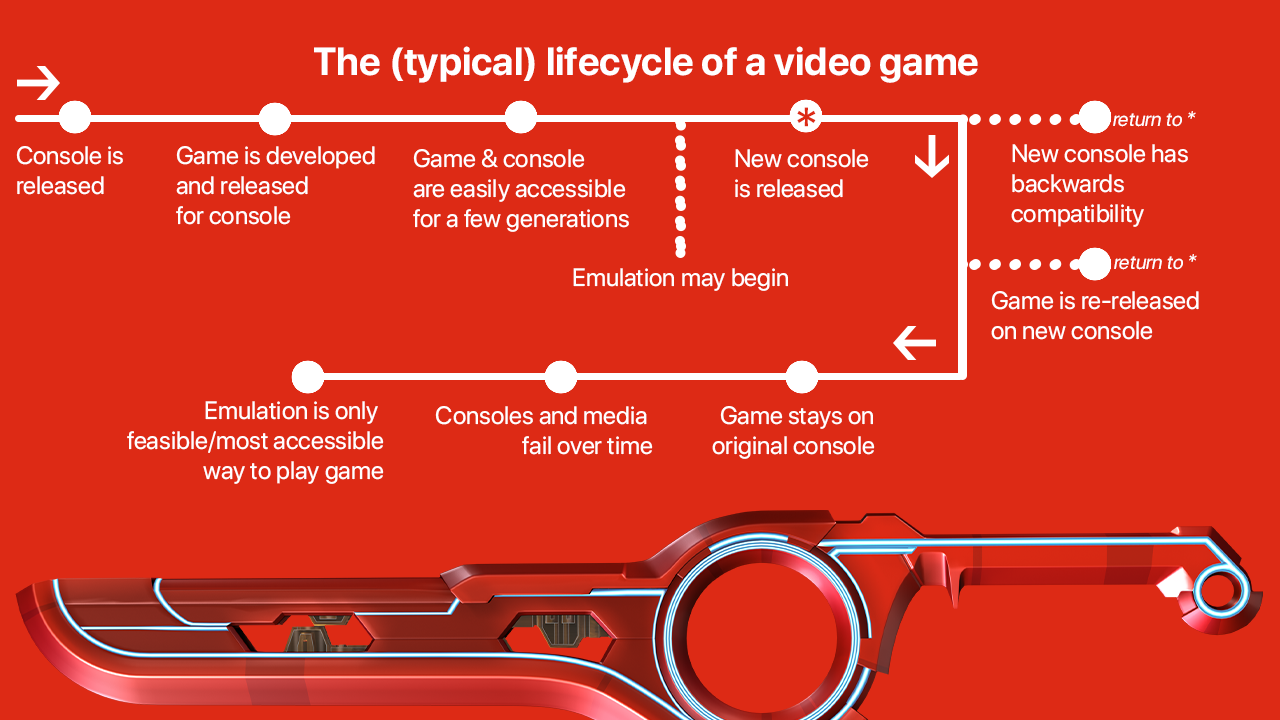 An awful, awful flowchart...courtesy me.

It is difficult to look at XB:DE’s performance on real hardware and not imagine what it would be like running on a more capable and unencumbered system. Many of the Switch’s AAA titles are embroiled in the same predicament. Platinum’s Astral Chain looked and played extremely well for the characters and environments it was pushing but felt ultimately hampered by the restraints of the Switch’s power. It feels almost necessary to think about the game in the context of how it will eventually be emulated, not for its existence on native hardware. This is generally how current trends in emulation are going with the gaming industry’s growing favor for off-the-shelf hardware components. To say, for example, that the Xbox Series X will “just be a PC”, is to also comment its potential longevity and feasibility in emulation. Can emulation yield higher resolutions? Better framerates? Maybe even VR conversion? These are the kinds of questions that pop up in my mind whenever I see a new game announcement and is certainly the case for XB:DE.

“Definitive Edition” becomes somewhat of an elusive misnomer for any game in this context. How can we say, with any certainty at least, how a game might perform with aftermarket emulation? The same game I purchased today may not play the same way five years from now. Maybe I’m jogging through the Bionis with a headset glued to my eyes, or the power glove and DDR dance pad make a sudden comeback for Monado macros. But if my return to Satorl Marsh has taught me anything, its that video games don’t necessarily need a remaster or remake to feel like a new experience. Emulation can be more than enough.

I play video games and sometimes write about them. I've never made friends in any MMO I've played and I once used a Wiimote as a weapon. Absent father to two very cute kittens. Frequent fence hopper and trespasser, but let's keep that between you and me.