A couple of months ago, I was pretty stoked to see what was going to come from the then-upcoming Kamen Rider series, Kamen Rider Ghost. Some of you may remember seeing this silly blog I wrote amidst the anticipation while Kamen Rider Drive's excellent closing act played out. I thought we might be getting something Halloweeny, maybe something like Kamen Rider Kiva, or... well, who knew! The per-premiere hype is always a magical time like that.

Now, a few weeks into the show, I have to say... It's not quite what I was expecting. 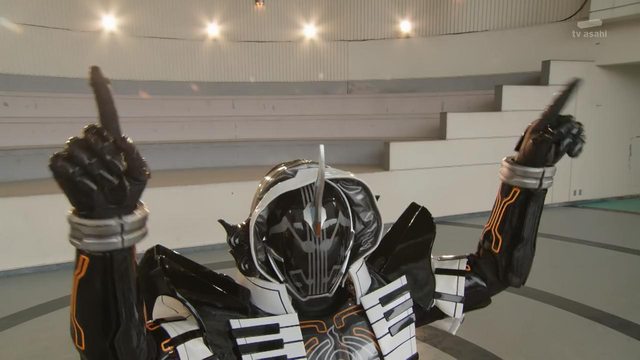 So far, it's been just okay. Not... terrible, and definitely not as bad as Drive was at this point last year, which some of you may remember my mentioning was not at all indicative of how it ended up. Based on that precedent, there's hope, right? Well, maybe. Still, it's kinda standard, kinda cheap, and in a way, it feels like its theme of living is almost going in a direction you wouldn't expect for a show about a dead guy using the other of other dead guys to fight villains who are using the powers of other dead guys.

But today, I got this weird idea. I remembered how I've heard how the staff of the now fondly remembered Kamen Rider Fourze wanted to make as light hearted a show as they could, as it was premiering in the aftermath of 2011's tsunami and earthquake disaster that Japan was still likely recovering from when the show was in production. Thinking on how that wasn't the first time Toei tried to tackle real life in some form or another with their shows, it got me thinking.

Considering that Japan's suicide problem is something that's become known worldwide, I wondered if Kamen Rider Ghost's overarching theme of living a bright life was a manner of telling kids to not give up. 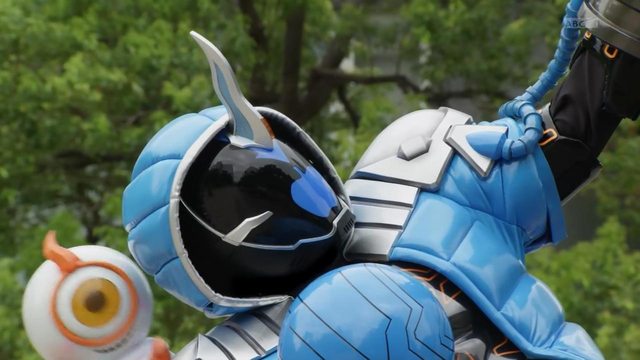 To be honest, I initially thought that Ghost was cashing in on the Yo-Kai Watch bandwagon, but in hindsight, this seems to be more what Shuriken Sentai Ninninger, the current Super Sentai series, is trying to accomplish with its use of ninjas fighting yokai enemies.

Ghost 's powers are all about using fictional people who are well known, many worldwide, and considered heroes. From Thomas Edison and Isaac Newton to Oda Nobunaga and Miyamoto Musashi, so far, Ghost is picking up quite a varied roster of spiritual allies. However, with a few of these instances, the writers take the time to humanize these historic figures, or remind viewers of how they were more than just someone remembered through their deaths.

Speaking of deaths, in the first episode of Ghost , the protagonist of the story dies. Since then, he's been trying to collect magical items that will supposedly get him his life back. While I'm not sure if I can say the show's execution has been fantastic, what it's doing is starting to stand out to me more as I consider the real world setting the show is airing in and the problems they're dealing with there. 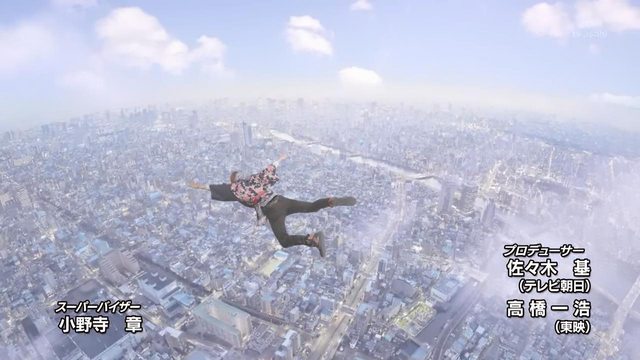 Kamen Rider series will often start off with small monster-of-the-week routines, then escalate into much larger stories once the origins and mysteries surrounding these monsters comes to light. Ghost is no exception to this.

In previous series, we would often see the monster of the week tied to a victim of some kind as well.

In Kamen Rider W , the heroes were detectives who would be hired by clients, often tied to the person transforming into the monster through items passed around the streets like drugs. In Kamen Rider OOO, the monster would be born from someone's desires, and the nature of desire was explored depending on the type of monster. In Kamen Rider Den-O, monsters would try to form contracts with unsuspecting people with the promise of granting a wish, and then once successful, these monsters would travel back in time to a point in that person's past to cause havoc. 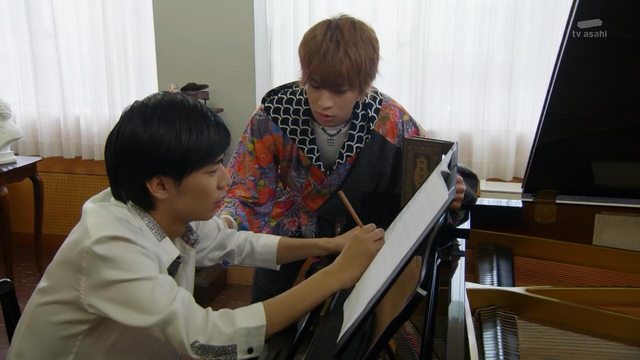 In Kamen Rider Ghost, it seems the monsters intend to drive the week's "victim" to giving up their lives, either through possession, manipulation, or just twisting desires already there. With the overarching theme of the series being the idea of leaving your mark on history, we've already had stuff like a pianist remarking that Beethoven was only famous and remembered because he died to get there.

He only said as much at a monster's suggestion, mind, but it still is a pretty heavy topic to just drop into a kid's show. I worry there are plenty of adults out there who might genuinely agree with the sentiment, with no monsters driving them to it.

In the end, like with every person in the same situation thus far, they were saved from ending their own lives. Not with a dramatic battle or a fight to the death or even someone jumping off a building and then a hero leaping to their aid. Kamen Rider Ghost has chosen a... different way to handle these obstacles.

When it comes time to convince the victims that life is worth living, Ghost saves these people with a hug. 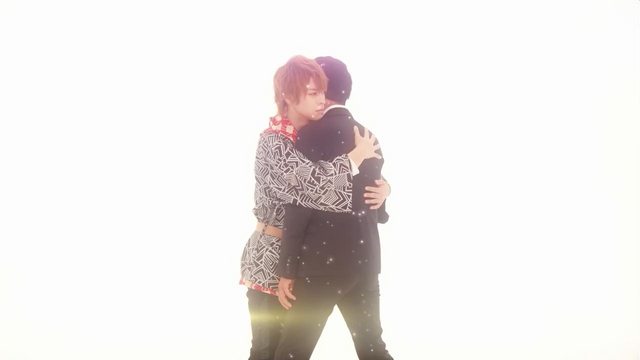 It initially struck me as tacky when it happened the first time Takeru (Ghost) embraced the victim of the week, with sparkling tears in his eyes as everything around them glowed a bright and shining gold. He embraced them, with a Disney-esque track playing in the background, told them it would be okay, and that life was worth living.

And it worked, and boy did it seem kind of cheesy. Admittedly, though, everything about Ghost seems cheesy right now. I figured it was just introducing the "mechanic" in the flashiest way possible, similarly to how certain items and toys will get flashy introductions, then promptly never be heard from until their obligatory reappearance in the higher budget movies where they can afford to bring the effects back. 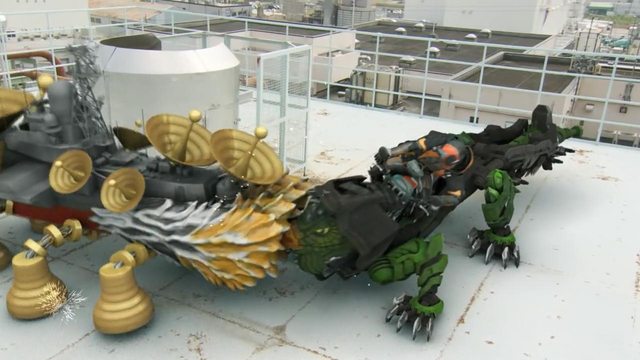 As much as I prefer Kamen Rider Wizard's use of leaping inside the hearts of people and fighting their inner demons (making Wizard essentially a one man Persona 4), I can respect what they're trying to do here. Or at least, what it looks like they're trying to do to me, anyway.

Takeru has died, is trying to escape this death, has seen how his friends all felt after his death, and so on. True, it was explored only to the extent a Sunday morning show for kids can do, but in context, this gives him a tremendous amount of empathy, which seems to be what they're going for with the character in general. As the time he has left to gain his life back runs out, he becomes more and more scared that he really will die, because he doesn't want that. He also hates seeing people before him willing to put themselves through that, not knowing what it's like themselves. 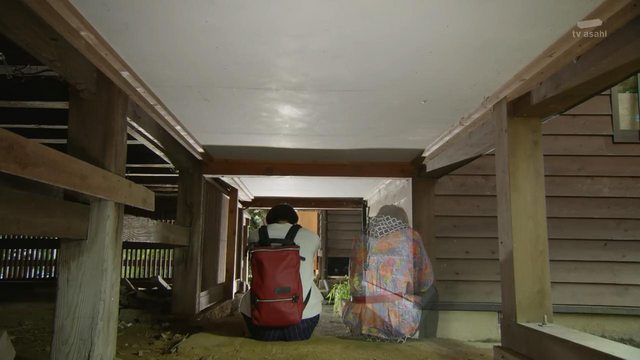 Similarly, Ghost's catchphrase, "Because I believe in myself!" starts to make a little more sense when I look at it from this perspective. He's yelled it out even when there's clearly no doubt in his mind, even when he's alone and totally fine, and it can come off as somewhat forced as a result. When I think a little more, considering the show's audience, and considering the stuff I mentioned above, it makes sense.

He's really saying to these kids, in perhaps a more heavy handed way than some might want to deliver a message, but either way, that's really who the message is for. "(I will keep fighting to live) because I believe in myself." To put it another way, "I will believe in myself and keep living." Does that make sense? 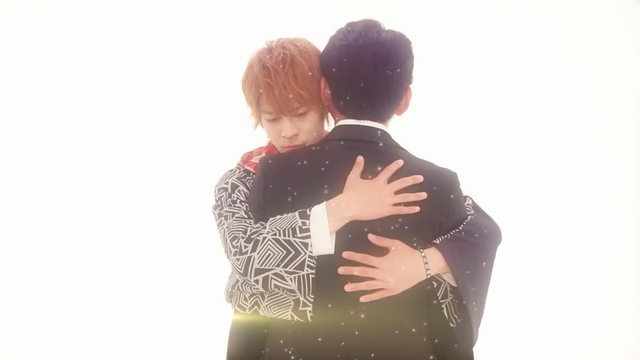 It might seem like a blatant way to go about it, and some might say it's maybe too blatant, but on the flip side to that, maybe more blatant action and "propaganda" like this through the media is necessary given how bad things are.

Maybe, if anything, we should be a little more blatant in our own media about this kind of thing, rather than trying to shield kids from reality or exclusively glorifying parts of life, like violence, and so on. Have a little of both, you know?

Life can really suck, and sometimes people just need someone to be there and show them some empathy, tell them that even with the hard times, their life is worth it.

Which it is, by the way. 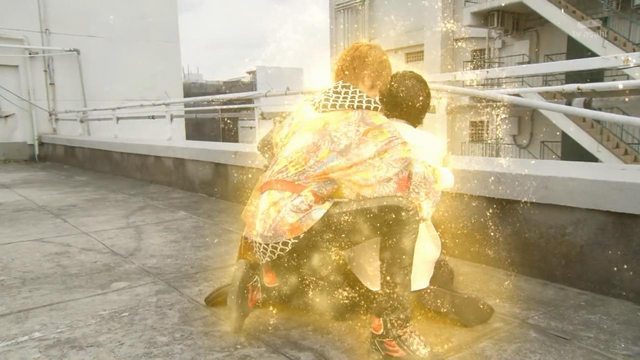 I can't say for sure if this is what Kamen Rider Ghost is going for in the grand scheme of things, or if I'm only taking it to this level because I'm an outsider who's just trying to decide whether or not I like the show as a show or not. Given these shows' histories with at least trying to have messages and morals alongside flashy fights and blatant advertising, I tend to think something is going on here, so maybe I'm not totally off base.

In the end, it's just a little unfortunate that while comic books are becoming more and more mainstream and acceptable here in the West, over there, you're supposed to "grow out of" these kinds of superhero shows, which could ultimately have a negative effect on the messages they're trying to impart on their viewers amidst the toy commercials.

If this is what Kamen Rider Ghost is trying to say to its young viewers, then I hope this is what sticks with them. If nothing else, I'll try to give it the benefit of the doubt and keep this in mind going forward while it's trying to find itself as a show... even if I may just be overthinking things. 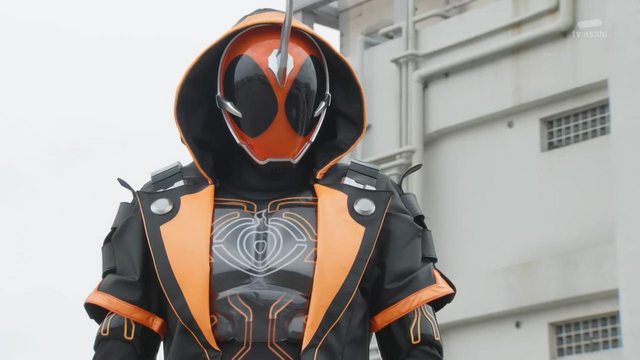