Can we fix Pokémon Events?

Ah, yes, Pokémon. The franchise that is today much as it was when I was just a lad. Weaken monster. Capture monster. Enslave monster. Become champion of monster enslavement and warfare. Truly, a franchise made just for the children. No, Pokémon as a franchise isn't exactly known for innovation or new features by many.

For whatever reason, The Pokémon Company and GameFreak, much as they have improved the games and added so much to them over the years, still suffer from what I like to call "Nintendo's Special Snowflake Sequel Syndrome." If you're a fan of Mario Kart: Double Dash, you know what I mean without my needing to elaborate. While many features have come and gone, one thing has withstood the test of time, and probably will last until the end of time at that. 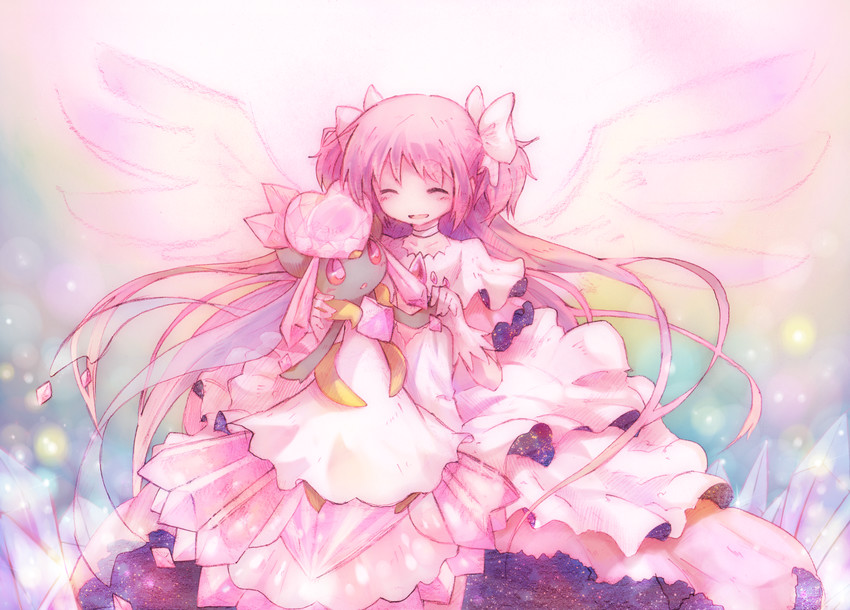 Sometimes you have to go to a video game retailer, where you can pick up a code or download it in store. Other times, you can download it directly to your game via the internet. In the past, you might have needed to use the fabled eReader, use a Japan exclusive cell phone addition, or any of many other ridiculous ways to get these special critters.

What has remained constant about all of these things is that these special Pokémon can usually only be obtained through these special, often limited time only events. Now, Destructoid's resident Pokémon Professor, Chris Carter, has professed numerous times his dissatisfaction with how event Pokémon events tend to favor the newer games over the old, if I could, I'd like to highlight how this issue is part of a larger problem, and then go on to offer a potential solution for it.

Let's look at the events we've gotten thus far for the most recent generation in the US: 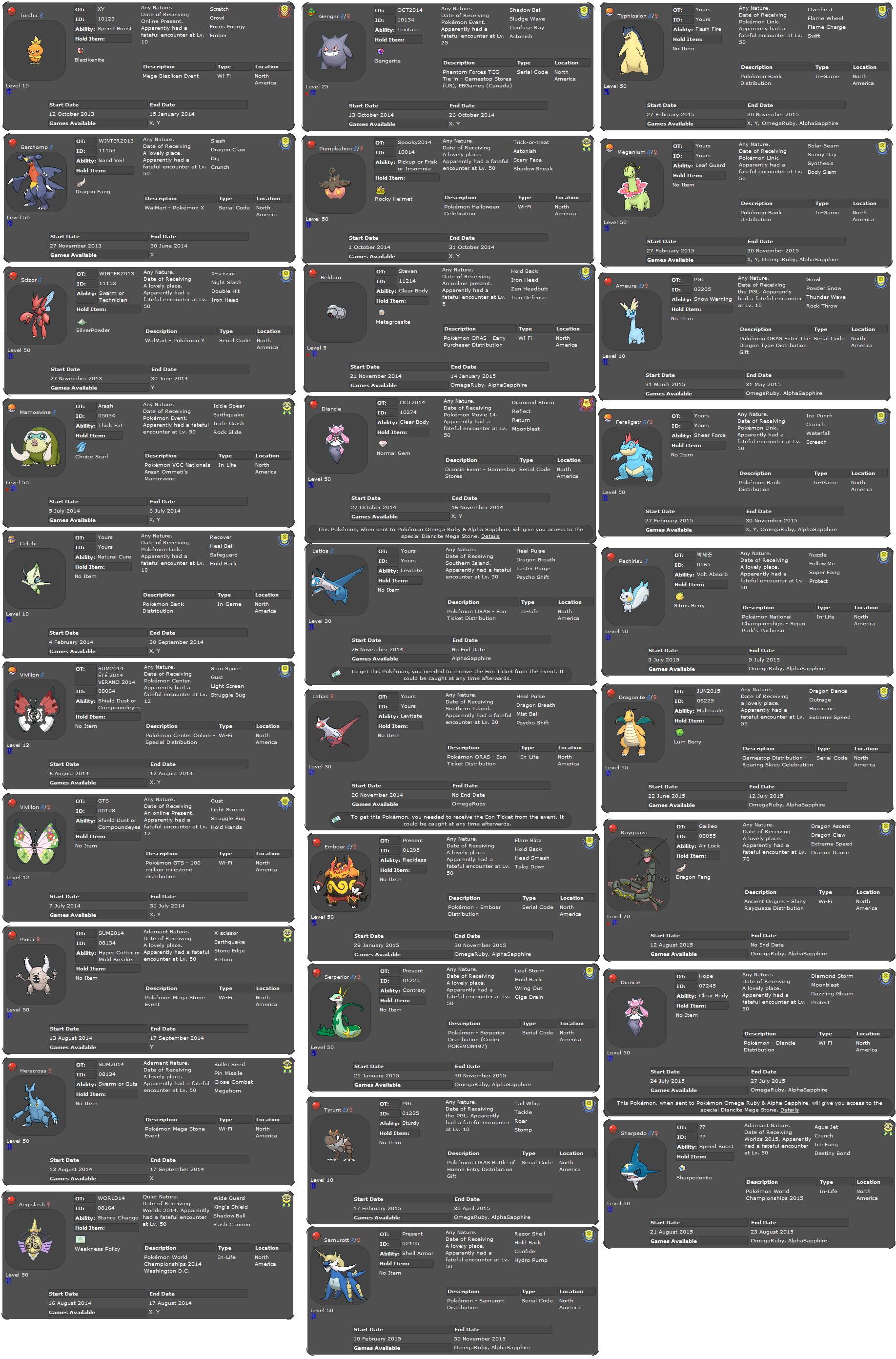 Click here if this is impossible to view in your browser.

At a glance, this might look like a surprisingly nice amount of things to just be given away. Sure, out of the three Pokémon that can only be obtained through event, we only got the first one in X and Y at the end of last year, but this is still a pretty nice selection... Right...?

Well... First, before I start comparing to other regions, let's look at how you actually get some of these.

All in all, this still may not look terrible to some of you even so. Out of about 30 or so Pokémon, I only gave about a third the X of not counting as "fair," so that's not too bad... Right?

Well, my friends, this is only the first phase of analyzing Pokémon events. Let us continue! 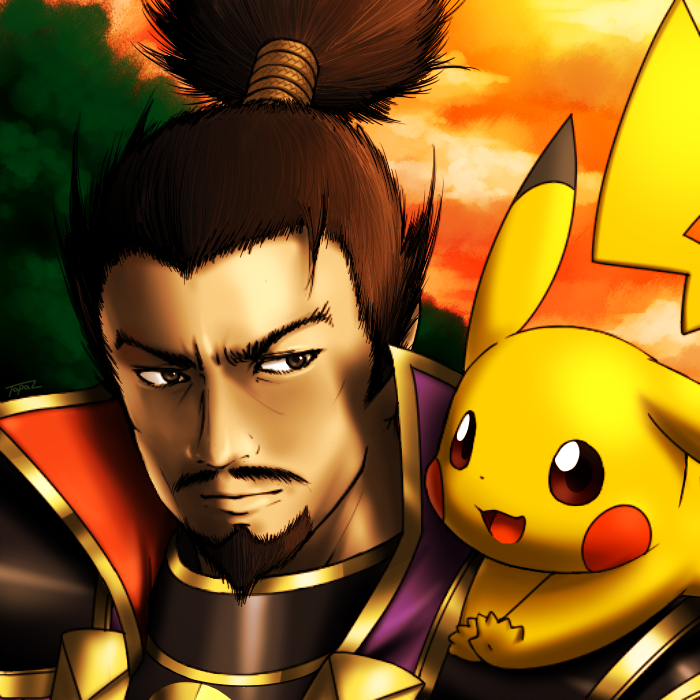 It's time to go to Japan.

Real quick for me, look at our list of events there. In the span of a year, most players would have been able to get, at the very least, the Torchic, the two Vivillons, the Celebi, either the Pinsir or Heracross (unless they had both games), and the Pumpkaboo. Naturally, there's the Gengar too if they dared go to a GameStop. That's not a bad haul.

In Japan, you would have been able to get the Torchic, just like the rest of us... but they got some other goodies in the meantime.

If you had a birthday during this period and were able to make it to a Pokémon Center, you could also download one special birthday Pokémon of a special set of birthday Pokémon, consisting of all of the Eevee evolutions, Eevee itself, and Pikachu. If you could get to Tokyo Bay's Pokémon Center at any point during a two month period, you could also download a special Inkay that knows a move exclusive to only that Inkay. That Wal-Mart Garchomp was given away as a code in magazines, and a Gengar and/or Scizor was given away at Toys'R'Us stores and Pokémon Centers during the Christmas season.

Continuing the trend of real life fun, another Inkay like the Tokyo Pay Pokémon Center one appeared at Pokémon Centers across Japan after Christmas for a month, just in case you couldn't get to that specific one. You could also win a special Wobuffet from the Pokémon Tretta arcade game for a limited period of two months, and did I mention Japan also had that Pokémon Bank Celebi?

Seems pretty even, doesn't it? Well, what if I tell you that we haven't even hit 2014 yet, and as far as the West is concerned, at this point we just have the Torchic and the two Wal-Mart giveaways? 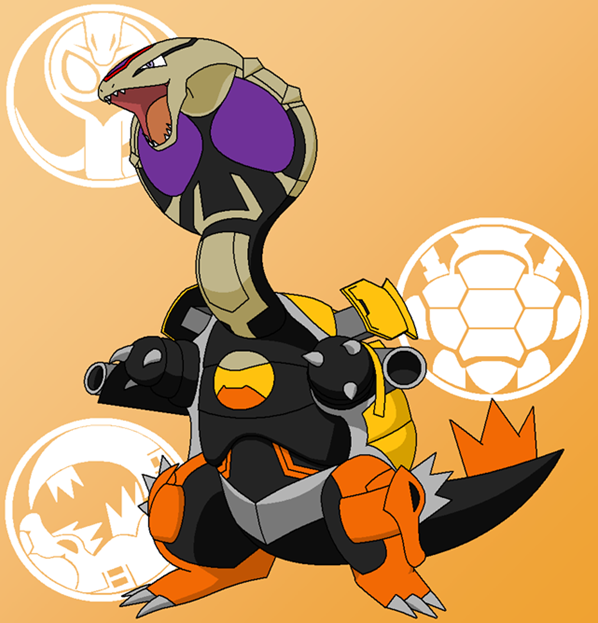 Just for the hell of it, Pokémon Centers reran those Christmas Scizor and Gengars because it was kind of a dick move to do it only during the week of Christmas, so this time, they did them through the entire month of February, giving people plenty of time to come to one of the multiple locations in Japan. In March, if you picked up a copy of CoroCoro Magazine (or perhaps subscribed to it?), you could get a Charizard with the Mega Stone opposite to the one exclusive to your version.

If you preordered a ticket to the Diancie movie any time from mid-April to the end of September, you'd get a code for a Darkrai. Meanwhile, Pokémon Centers once again started giving out goodies in the form of a Mega Evolution event featuring Gyarados, Scizor, Kangaskhan, Gengar, Tyranitar, and Mawhile. This wasn't a situation where you could only get one, either, they made it so that you could get all of these bad boys.

Then, to celebrate a member of the Japanese World Cup team who voiced a character in the upcoming movie, on June 15th, multiple stores gave away a special Pikachu that was the same level (22) as the player's jersey number, which is one of the coolest events I've heard of happening anywhere, personally. 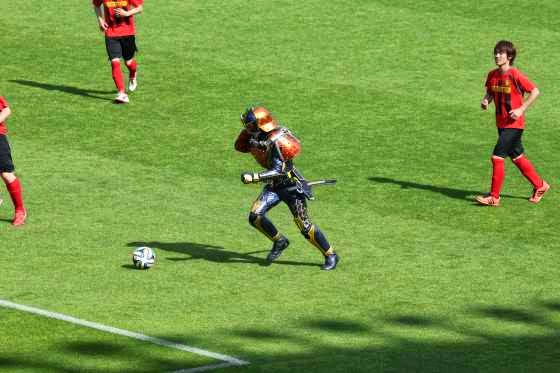 Japan sure did let that World Cup fever into some strange places though...

After that, it was business as usual! If you went to the Diancie movie, you could download it via local wireless. That might sound like a pain, but local wireless means you might have not needed to actually see the movie, and did I mention this movie was in theaters for three months and had two pre-release screenings in July where you could also download the little rock fairy? Pokémon is serious business in Japan, wow.

It's only at this point, once we're through all of these events, that we finally hit that Pretty Vivillon Wi-Fi event, which is about when we're 1/4 through of our current events, and was also the 7th or so we got. Japan, meanwhile, is nearing, like... 20 or so at this point? Wow.

I could go on, but I think the point has been made. I will say that Japan doesn't escape the push for Omega Ruby and Alpha Sapphire exclusive events (the tournament rewards that require using those games can only give the rewards to those games, obviously), but unlike our events, it still makes sure to have some of their events include the older games too. In fact, almost all of 2015's events include X and Y, and this year has already seen about 20 events for Japan already.

At this point, I'd take the time to point out European countries also have gotten some pretty nifty events at times too, even ones that Japan hasn't gotten, but as I said, the point has been made. While it does deserve pointing out that many of these events involved going somewhere in real life, it likewise deserves pointing out that these multiple-location events were taking place over an extended period of time in a country smaller than California.

Basically, the "larger problem" is that Japan keeps all the good stuff to itself. Did I really need to take so much time pointing that out? Could I have done it in an easier way? Probably not and probably, respectively, so let's move on. 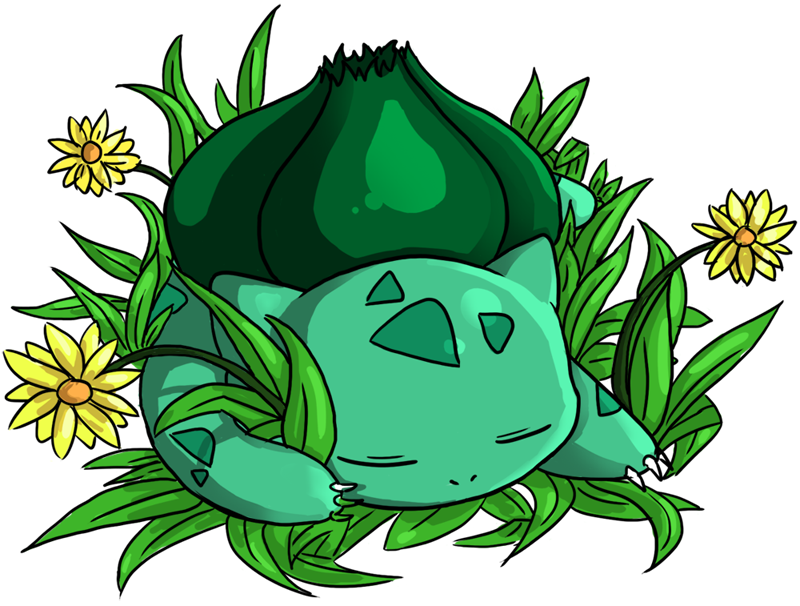 How can we solve this problem? It's clear that the US, and the West in general, just isn't getting the same kind of love when it comes to these events, but what can we do about it? Most of the Japanese ones are being given away at the local stores, and we can't match that. It wouldn't be feasible.

If only there was a higher power... A web that stretched worldwide that they could use to distribute them... Or some kind of outside service that people subscribed to, that they were required to use to participate in tournaments already...! Or maybe a bank of some kind that occasionally offered special event creatures in return for using their services!

Oh, if only things like those existed, maybe then there would be a way for us to match Japan's awesome might of being a smaller country with a lot of stores dedicated to a single franchise! 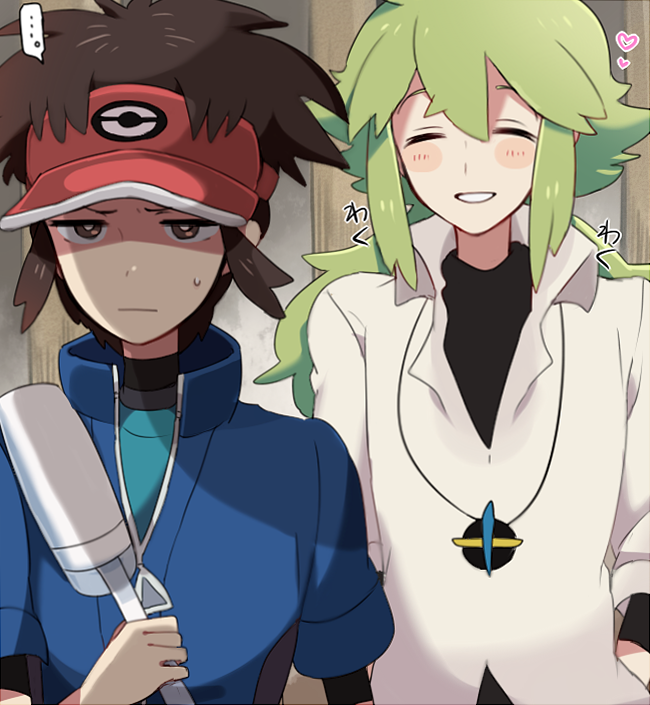 It is with all of this taken into consideration, particularly the fact that other regions have their own occasional exclusive event, not to mention that Japan has had tons, that I have come up with this:

US EXCLUSIVE GIVEAWAYS AND EVENTS 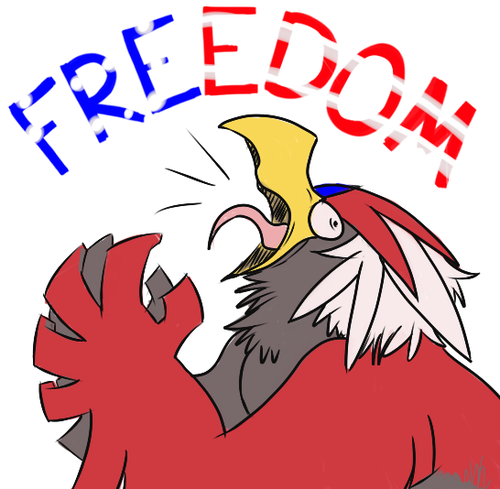 In hindsight, I probably should have gotten right to this part. 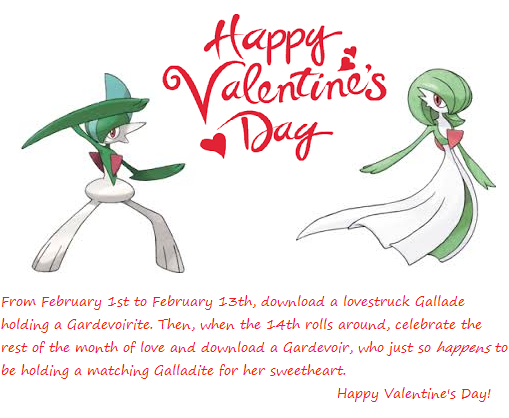 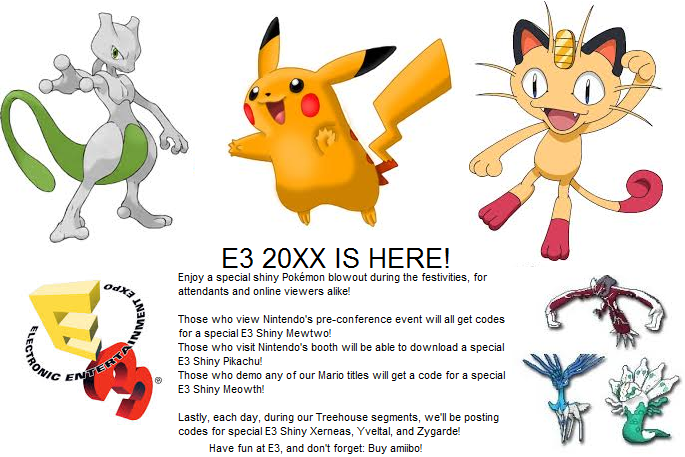 ... and so on. I could probably do this all day, or give each of these a ton of nonsensical details, but you guys get the general gist of this. In the end, there's no excuse for GameFreak/Nintendo of America/The Pokémon Company/whoever to not at least try to do something like this for countries not Japan. It's not like we're not all very aware that Japan is getting a ton of events we aren't, and we all certainly know about those yearly Jirachis they get.

Isn't it about time they share the love a little? 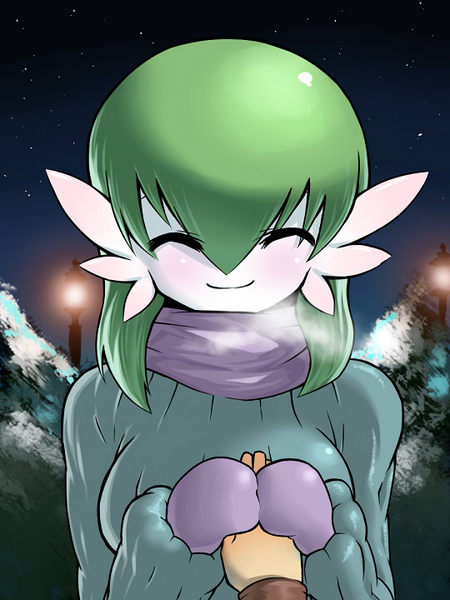 Anyway, now that I'm done pointing out the obvious in as roundabout and unnecessary lengthy a way as possible, let's make this fun!

Since my proposed solution is that every region should have region specific events alongside the ones everyone gets, but I'm only covering the US (and barely at that), I want you guys to tell me what your ideas for events are! If you made it down this far, you earned the right to share your goofy ideas with the community, so share away!