Even as I sit down to write this response to the Blogger's Wanted prompt, I'm not fully sure what I want to write about. It's not that I don't have any ideas... I'm just not sure which thing I want to write about for sure from the ideas I have. You know, this part is going to look rather strange considering whatever I do decide on will be in the title, meaning we'll potentially some weird time paradox thing going on, but who cares about that, right? 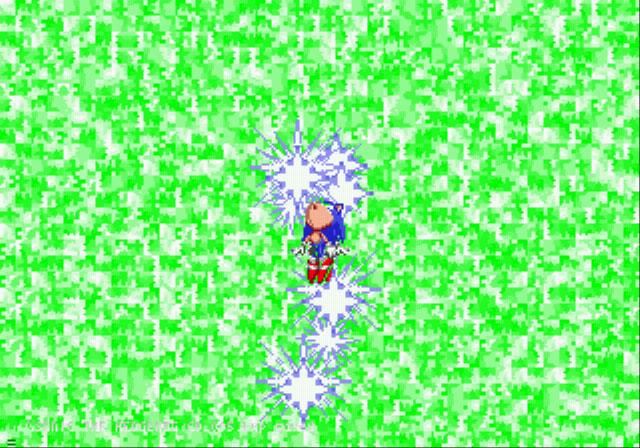 Well, Sonic might. Sadly for him, this is not about Sonic today!

The reason this is such a difficult decision is that there's just so many options. We got a really good prompt this month, but could it be... that it was too good?! Maybe my only option is to go through each one and see which it is that I like best? I suppose that works... 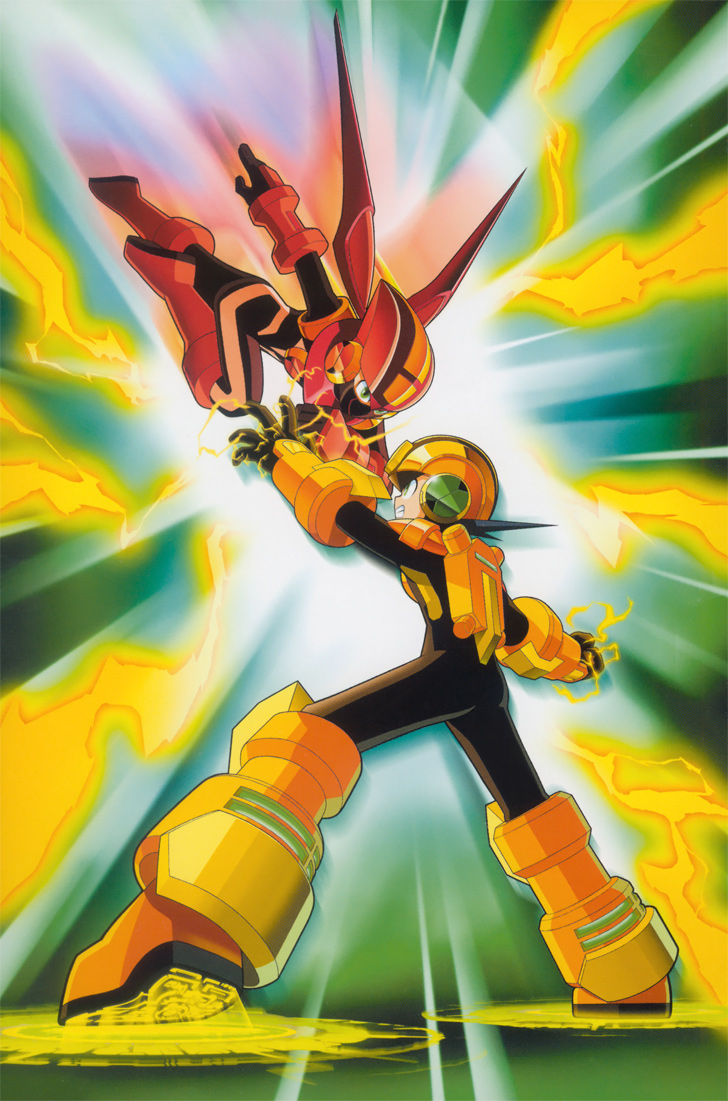 The Megaman Battle Network series for GBA is, to this day, a series I hold near and dear to my heart. It's also one that I've also never played the first entry of. I guess at some point I started holding out for that DS port to get localized, but Capcom wasn't cool enough to do that, were they?

I actually started this series from the third entry, Megaman Battle Network 3, before backtracking to 2 and then moving forward to 4, 5, 6, and other related titles. Nostalgia might be at work here, but whatever the case is, to this day, Battle Network 3 is one of top five favorite games of all time ever in the history of video games period. 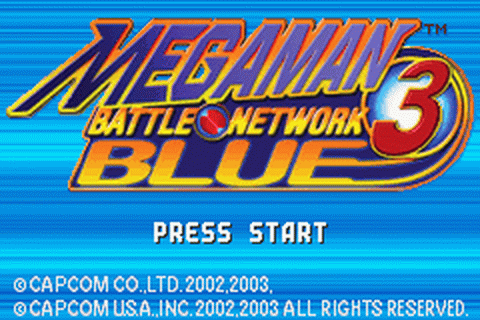 While I like the other Mega Man games, none of them have really charmed me the same that this series has. At times, the spiritual sequel to Battle Network, Star Force, uncharmed me to its offerings, if anything. With that in mind, perhaps it's the fact that that has brought me to want to talk about Megaman Battle Network here. Nothing like it has come since, it has a special place in my heart and gaming history, and its only successor has been, well... not as good.

And in all seriousness, like many of my favorite Game Boy titles, this series has actually aged pretty well, especially 3. By this point, gameplay had been refined to be as good as it seemed like it could be, and we had reached the conclusion of what could have been a fantastic trilogy of games. As an aside, most tend to not be as big on the later entries of the series, and it's true, my favorites are the second and third entries, but 5 and 6 are great in their own right, I think.

... but back to 3, since that's specifically the game I want to talk about.

In Battle Network 3, you could customize your character and how you fought to amazing lengths, and I think that's one of the many games of my childhood that really influenced the things I've later come to desire out of games. The freedom I found in picking the different Battle Chips I could bring into battle, the freedom I still have in that compared to many modern games, and then the way I could "program" MegaMan.EXE, well, it was a blast.

And you can bet your sweet ass I used Bug Style.

Look at that sweet asymmetry.

With gameplay that still hasn't met its match today and writing that quite honestly still holds up compared to RPGs targeted at the same demographic now (comparatively, Pokémon seems to have taken a sharp nosedive after Black and White), the Megaman Battle Network series is a series that I'd like to think will always hold up on some level, though perhaps I really am started to be a little biased now.

That said, the writing probably deserves special mention here, so let me take a moment to mention just that. As a kid, I "understood" Battle Network, but older, there's a lot I now can understand and empathize with so much more clearly. It's obviously targeted at a younger demographic, but it still manages to make itself a quality product for older audiences as well.

I mean, while Ash is running around in Pokémon living his happy life with his Pikachu that probably only ever worried about whether or not the sexy Pikachu girls he was going to go on dates with would ask if he had rubbers, the main character of Battle Network is carrying around the soul of his twin brother who died at birth in the form of MegaMan.EXE.

The game doesn't treat it as "dark" so much, but it's very... real for a game targeted at kids, you know? I could appreciate the feelings and stuff as a kid, sure, but looking back, I'm really impressed how they managed to do so much in such a bright and colorful package.

And that point is that Megaman Battle Network is a fantastic series and I will hunt down every last one of you that doesn't back the inevitable RED ASH Number 9 Fight Web. 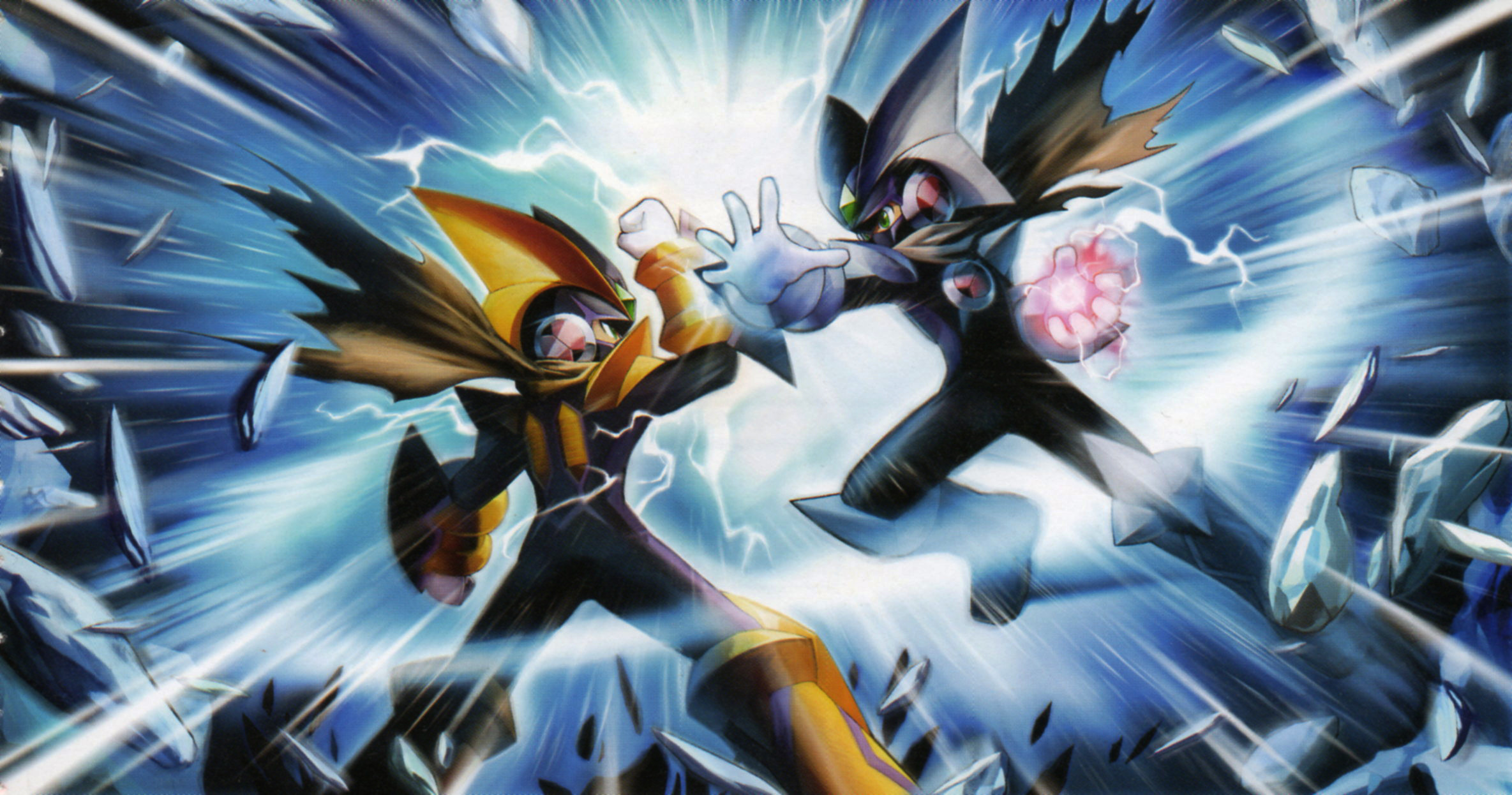 Okay, fine, maybe this wasn't the best topic after all... What was the other one I wanted to do again...? 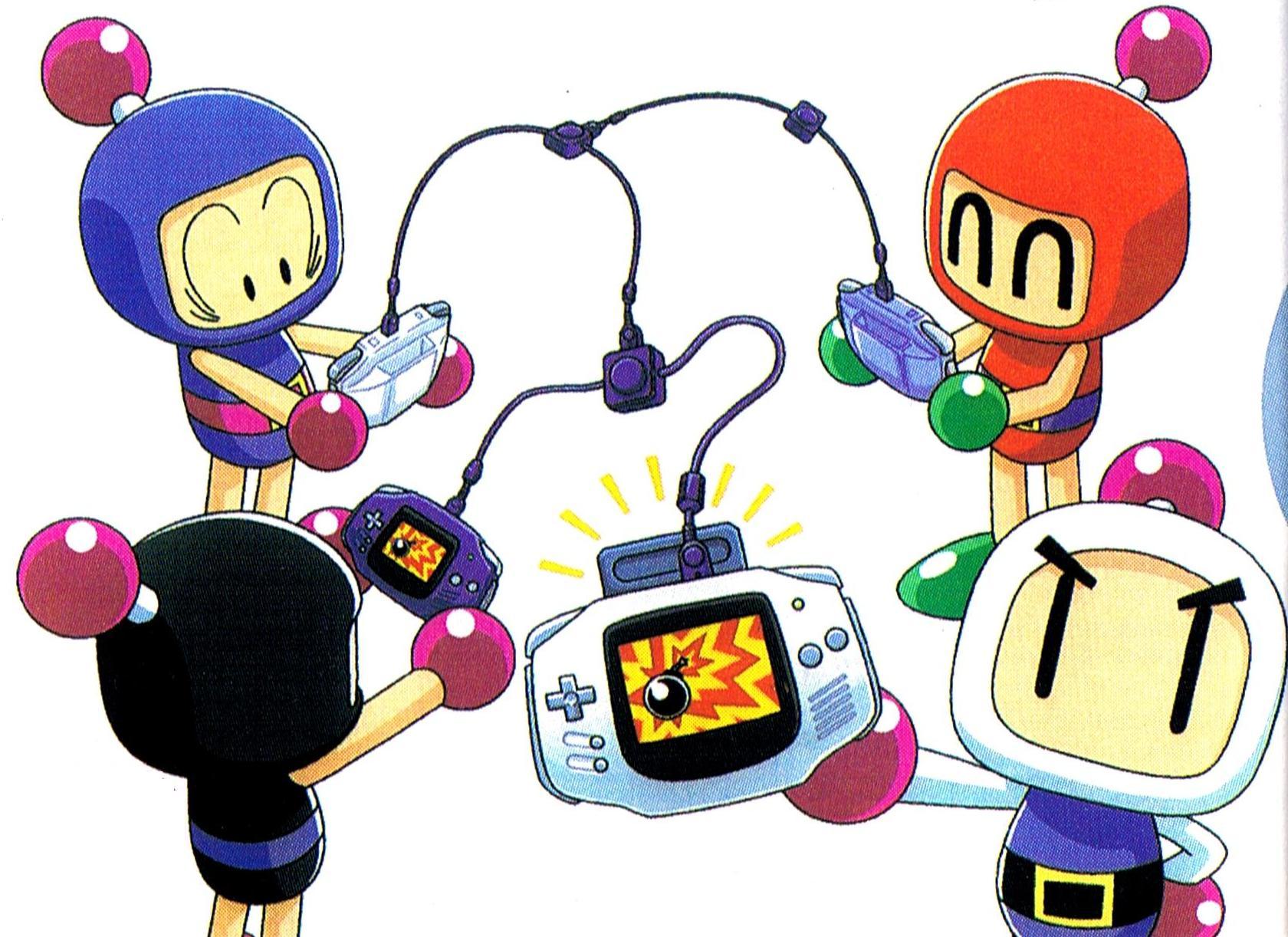 Some people hate Konami for what he's doing to Kojima and how they killed Silent Hills. Me? I've come to hate Konami because they killed off one of my favorite developers, forcing the only known survivors of the tragedy to a lifeboat of shame in the Nintendo ocean otherwise known as the recent Mario Party games.

You might not remember all of Hudson-Soft's games. Sure, Pokémon Trading Card Game on the GBC was pretty cool, and those games in the Advance Wars series they made for Intelligent Systems were probably pretty rad. Oh, they made the good Mario Party games too? How about that? Oh yeah, and the short-lived but never forgotten Bloody Roar series, Digimon Motherfucking Rumble Arena, and... Oh, who am I kidding? You've gotta remember Bomberman! 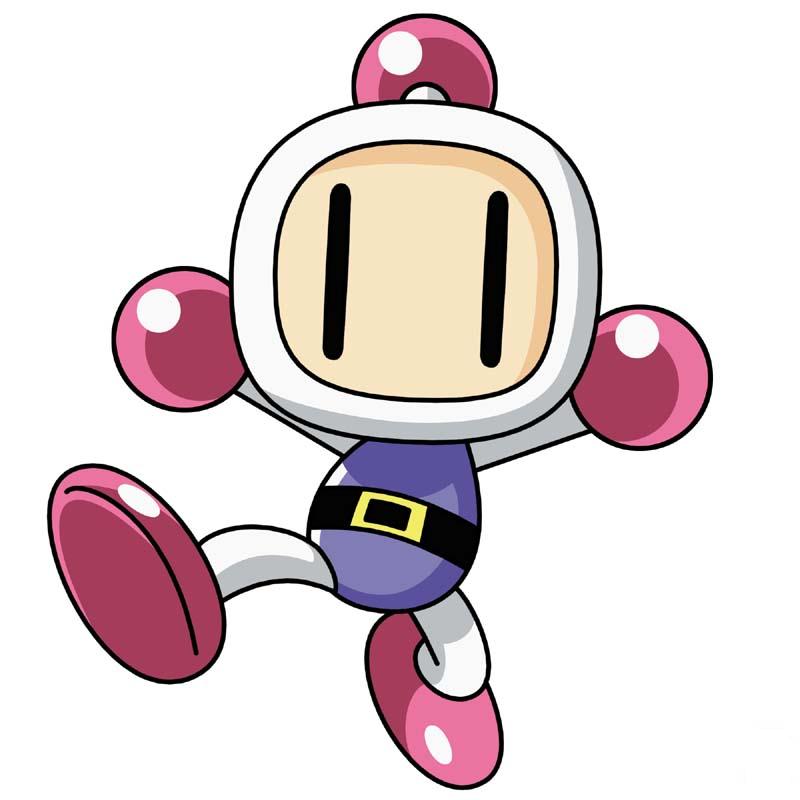 It's kind of funny, because if the series was still around, I have this depressing feeling that it would be one of the ones people would go straight to when they list of series that "need" innovation. Bomberman is pretty simple when you get down to it, after all. You take your "Bomberman," you have him put down his "bombs" next to blocks, you blow up the blocks, take the power ups inside, make better bombs, and repeat this process alongside as you blow up blocks keeping you from your enemies.

How the hell did something like this ever go beyond one game?! They never even really added more to that core concept, did they? The Bomberman game on PS3 and Xbox 360 is basically just that, but with unlockable costumes!

Tut tut, my friend. What made Bomberman so great is that not only was the basic game that was repeated on every other console and its version of World 1-1 or Green Hill Zone a game that stands up to this day, but it was that the series branched out something fierce in its time. I never appreciated it when I was younger, in part because they were never in short supply like they are now thanks to Konami, but Bomberman as a franchise did so darn much with that basic concept that it really is depressing that such a series just... died like it did. 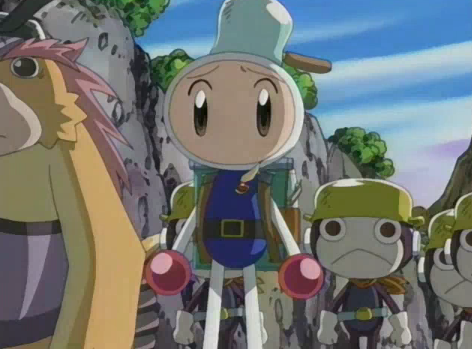 Sure, Bomberman has had plenty of games that were of the simple birds eye view, party variety, but you know what else it had?

The point is, this series not only kept its core concepts within most of its entries, but it did so while innovating all the while, which isn't something you see too often these days, and it's something I can appreciate all the more after seeing how so many other series have fallen trying to do what I took for being something so natural from Bomberman in my youth.

It's also something a certain blue hedgehog and his series could really learn from...

... but I digress. In all seriousness, the Bomberman series is one that has offered a plethora of different ways to blow enemies up, and I honestly can't think of a specific one to name as a representative for what makes me love it so much. There are so many that do it so well and so differently that I just can't. If nothing else, this means I'll never run out of things in terms of Bomberman to do should all of the games ever become available on the eShop and PSN! 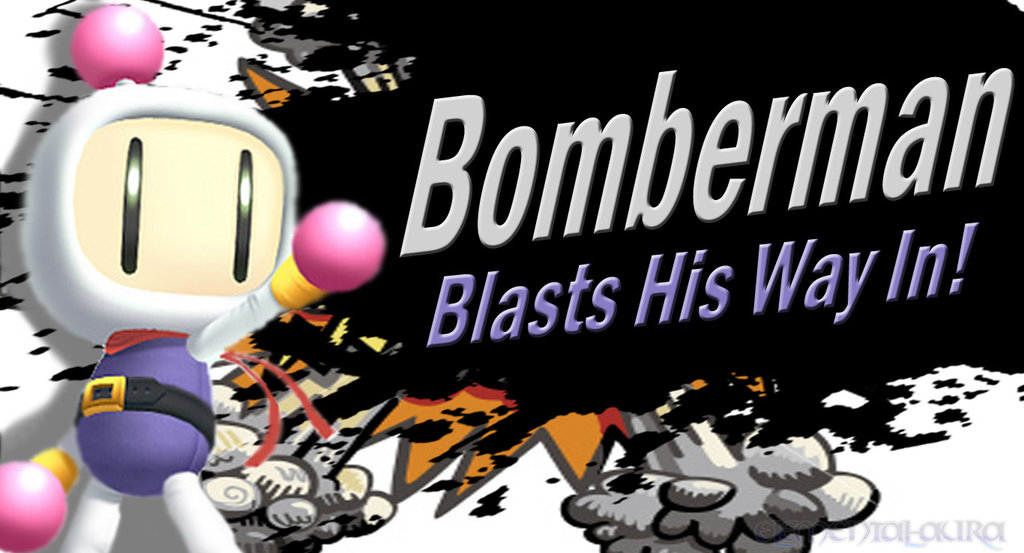 Come on, Konami. You pulled through for Suikoden, why not Bomberman?
There's always Smash Mobile, made by Konami, right?

Man... You know what? I had so much fun writing this blog and going over some of my favorite games of times past... I think I've finally decided what I want to write about!

This blog got better with age! Didn't it?

Even as I sit down to write this response to the Blogger's Wanted prompt, I'm not fully sure what I want to write about. It's not that I don't have any ideas... I'm just not sure which thing I want to write about for sure from the ideas I have. You know, this part is going to look rather strange considering...