The worst thing about censorship is ███████ - 014 - Mortal Kombat on Steam

1:04 AM on 07.04.2013 (server time)    0
Salida dear readers,
my name is Jim aka "OpiumHerz" and as some of you may already guess by that nickname: I am german. With the blog series "The worst thing about censorship is ███████ " I want to simply give you a little insight in videogame censorship, which is still pretty much alive and kicking here in Germany (but I won't restrict myself to Germany exclusively).I'll try to post entries at least all two weeks or so. Feel free to comment for suggestions, corrections or critique.

This episode is about: Mortal Kombat on Steam


Yesterday, on July the 3rd 2013, Mortal Kombat (9) was released on Steam. While I myself am not too big a fan of the series, I was interested in this particular title. It seems to be a pretty good fighter, but I never got around to buy and play it on consoles. Jinx even wrote a whole blog about the port.

So I merrily clicked on the link in it to purchase it and... 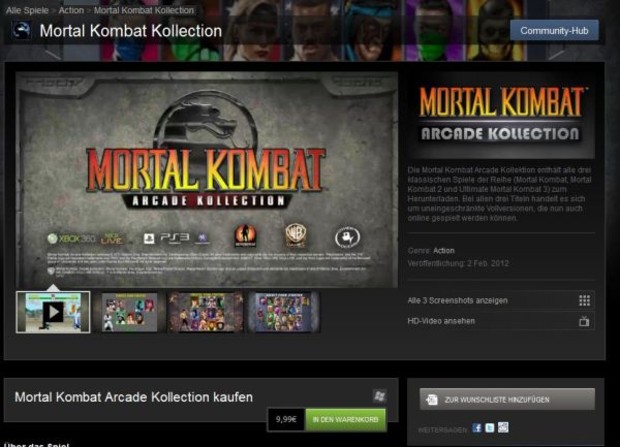 When I saw this, my thoughts went something along the lines of "I hope whoever is responsible for this gets fucked in the ass with pineapples". After calming myself after three more seconds of rage, I found this be another perfect example for this series.

Let's say I want to get MK 9 on Steam now, what options do I have?
- buy it via VPN/proxy
- let someone else from another country buy and gift it to me

Although #2 and #3 never happened as far as I know, Steam has the rights to do it, thanks to their dictator EULA. It's shit like this why I hate Steam and I do hate myself, whenever I use it. Not only do I want to give them money for a product and they are like "lol, no, indexed, can't do it" without any legal grounds, no. By selling the original Mortal Kombats (the original MK was the first game to ever get banned in Germany, all of the original trilogy are still indexed) they just kick me in the balls in the same breath. Can I buy the new MK safely with being a bit tricky? Who knows, who cares - right? If I really would want to play it safe here, I'd have to pirate it. But I don't WANT to pirate it. But this is such a prime example what an incosistent mess Steam is. The one indexed game is bad, the other one is a-okay. And MK isn't the only example here (should maybe make a little list for the lulz).

Salida
#General-Opinion/Editorial
Login to vote this up!