The worst thing about censorship is ███████ - 013 - Nazis

11:58 AM on 07.02.2013 (server time)    0
Salida dear readers,
my name is Jim aka "OpiumHerz" and as some of you may already guess by that nickname: I am german. With the blog series "The worst thing about censorship is ███████ " I want to simply give you a little insight in videogame censorship, which is still pretty much alive and kicking here in Germany (but I won't restrict myself to Germany exclusively).I'll try to post entries at least all two weeks or so. Feel free to comment for suggestions, corrections or critique.

This episode is about: ze Nazis!

Ohhh Nazis. It's somewhat ironic that the most likely best known military force in history has become a popculture icon. I don't know when it first began, maybe already during WWII with the anti-propaganda. But the thing is: Nazis these days aren't a taboo topic. You shoot Nazi zombies in Call of Duty, you headshot them in Sniper Elite V2 and you play Battleship with them in Silent Hunter. Nazis have become normal enemies in videogames and it doesn't matter if they are pictured more realistically or if you fight a mecha Hitler.

The thing is... this isn't the case in Germany. First you must know a bit the mentality here. While it has gotten better, the generation up to my parents were almost trained in pawlovian ways to react to words like Nazi, Jew, Hitler etc. They can't really use these words like normal, almost don't even dare to speak them at all. When I asked my mother as a child once why Wolfenstein 3D was banned in Germany, she just replied: "Because it's about Nazis.". It would take me years to find out that was only half the truth.

The thing is, many germans are still very twitchy when it comes to this. And you can clearly see that in videogames. Because in Germany there are no Nazis in videogames. At all.

This is due to a simple law. It's strictly forbidden to depict what we call "symbols that are opposing the Constitution". What are those symbols? Well the swastika, the SS runes, the Sigrune - all that stuff. If you would wear a swastika t-shirt or have a SS rune patch on your bagpack, police would most likely wanna have a little chat with you.
But there are certain contexts where it's allowed. First of all, there is history related context. You know, documentaries, books, museums and all that. In that cases, when it has a documentary background, it's allowed to show these symbols. The other thing where it's allowed it art... and this is where it gets somewhat moronic.

You see, in Germany, videogames aren't considered as a form of art by law. And they sure as hell aren't documentaries. So you see what problem stems from that. The fact is: you are NOT allowed to depict nazi symbols in videogames here. By law. Even if someone would want it, they couldn't. The game would get banned, most likely never reach store shelves, and the distributor could very well get sued. We are REALLY nitpicky here. The collector's Edition of Silent Hunter 5 was called back because they forgot to remove a single, small Reichsadler with swastika. It doesn't matter if it's some batshit crazy stuff like Wolfenstein or Nazi Zombies or taken from realistic backgrounds like Silent Hunter or the more serious WWII games.

And this is where censorship comes in. There is usually two ways how to handle nazi stuff: change the symbols to german symbols that are not critical or retouch stuff. Thus it's very popular to change the swastika with an iron cross. Take this example from Call of Duty 3. 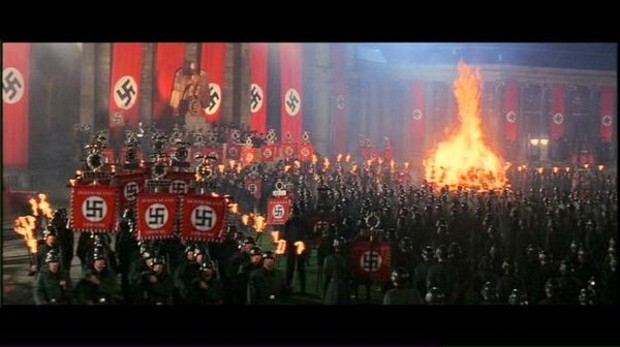 And even stuff like Dead Snow gets through without problems here. When it comes to movies it really doesn't matter how far off the ground it is, it's okay. Because movies are officially considered art in Germany. No, it's just games (and comics, but that's a different topic) and because of that it's just stupid! On the one hand you have the Indiana Jones movies with a guy saysing "Heil Hitler" into the camera, but games rated for adults have to be censored by law, because they are not considered art. It's just shizophrenic.


And as a little bonus tidbit: every month it's made public what has been indexed and banned. You find CDs of Nazi bands and some propaganda stuff like that almost every month on the list. I can always just shake my head about this. Now you might wonder: why would I be against banning Nazi stuff. Am I a Nazi? Well, no. I'm not a Nazi. Not even close. But I mentioned it earlier: this stuff? There is NO way it well get in a normal store here. Randy Pitchford will be honestly sorry in public for Aliens: Colonial Marines before any normal, public german store will sell you a Landser CD. But every month manpower and time and money is wasted on this whole shit with NO effect at all. Because you can be pretty sure that the underground stores that sell this stuff don't give a flying fuck about a CD being indexed or banned.


Salida
#General-Opinion/Editorial
Login to vote this up!