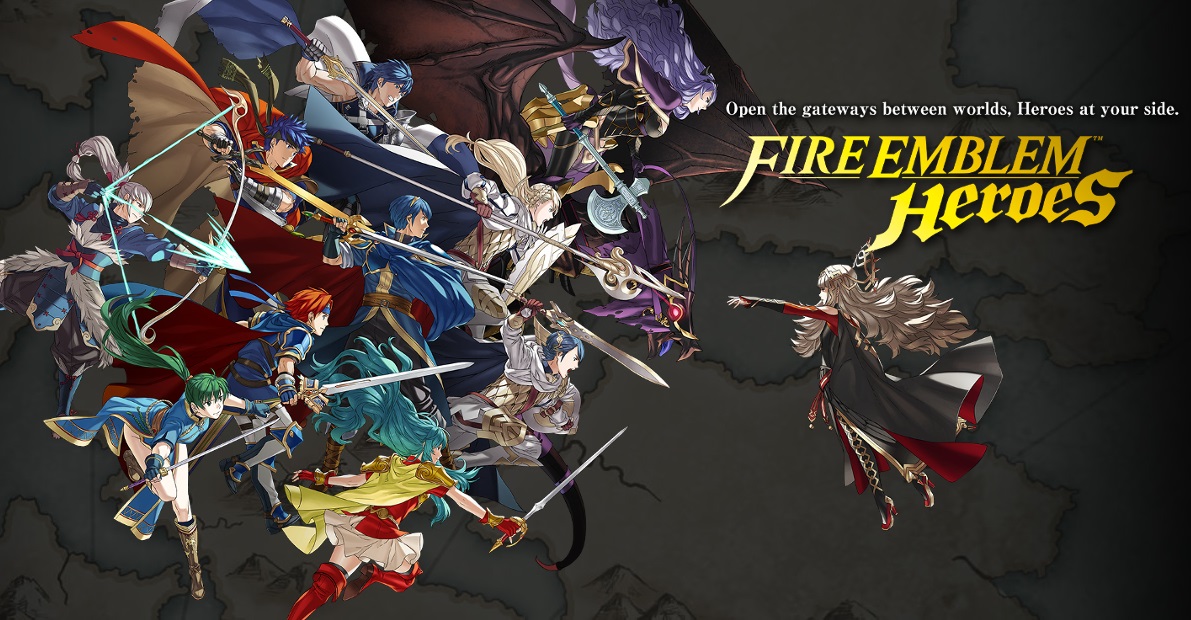 I wouldn't say I'm a mobile game aficionado. I dumped six months into Puzzles and Dragons, played two months of Final Fantasy: Grand Masters and experienced the riveting Hill Cliff Horse, which was like being in a Gaia Online chat room... But as a horse. I was a very tiny and pretty horse with wings. Clearly I'm the most qualified to talk about Nintendo's mobile efforts with Fire Emblem Heroes.

It's no surprise that Fire Emblem Heroes is a clever adver-game in disguise. Nintendo hasn't been shy about their plan to use mobile titles to drive users back to their main products. Instead of Drake and Kat collecting delicious zero sugar Coke Zero™, husbandos and waifus from the series take part in a pared down strategy role-playing game. The charming between-battle character interactions aren't here, but most of the franchise's mechanics are present. 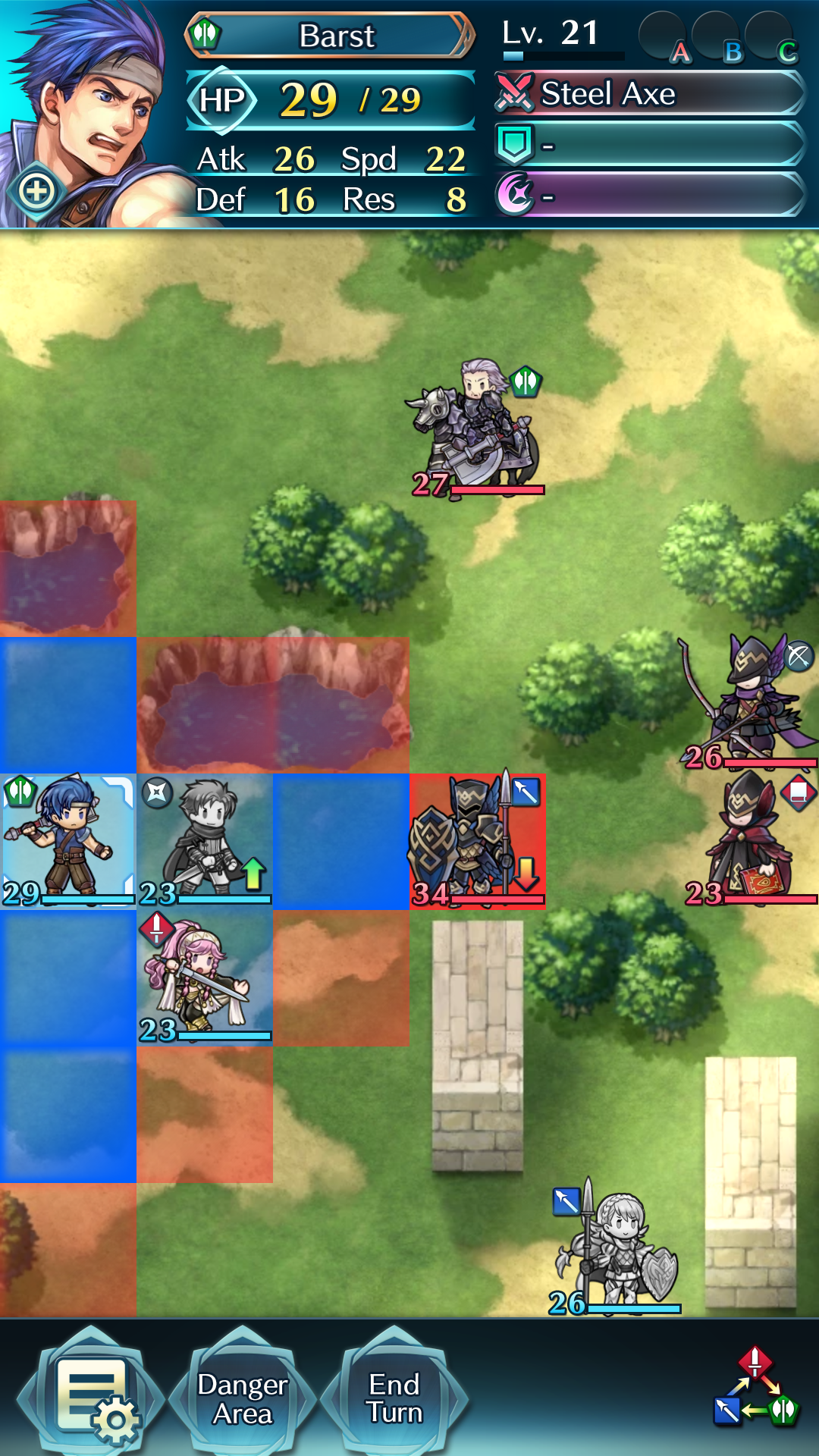 As with every Fire Emblem, a lot of the combat comes down to character placement and exploiting weaknesses via a rock-paper-scissors-like weapons triangle. Each map has always been similar to a puzzle in the main entries, and that's even more so in the case of Heroes. All elements of chance have been abolished from combat. There are no missed attacks or critical hits. Someone is going to get hit, which places more strain on the player to keep the fight in their favor. No act of god can save a straggling unit or miraculously defeat a high powered foe which often makes certain predicaments seem futile.

Each map features an 8x6 grid that fits onto a single screen. Add in environmental obstacles, and often battles can feel claustrophobic even when featuring small four on four skirmishes. The size is intentional to keep each round short. After all, it's a mobile title. You're likely playing it due to a lack of time to go deep into something else. Nonetheless, for a game that takes after the Strategy RPG genre, the options can feel criminally limited. Because there's a de-emphasis on mobility and strategy, challenges can feel reliant on “have you leveled up enough to deal with this unfortunate scenario you've been dropped into?” 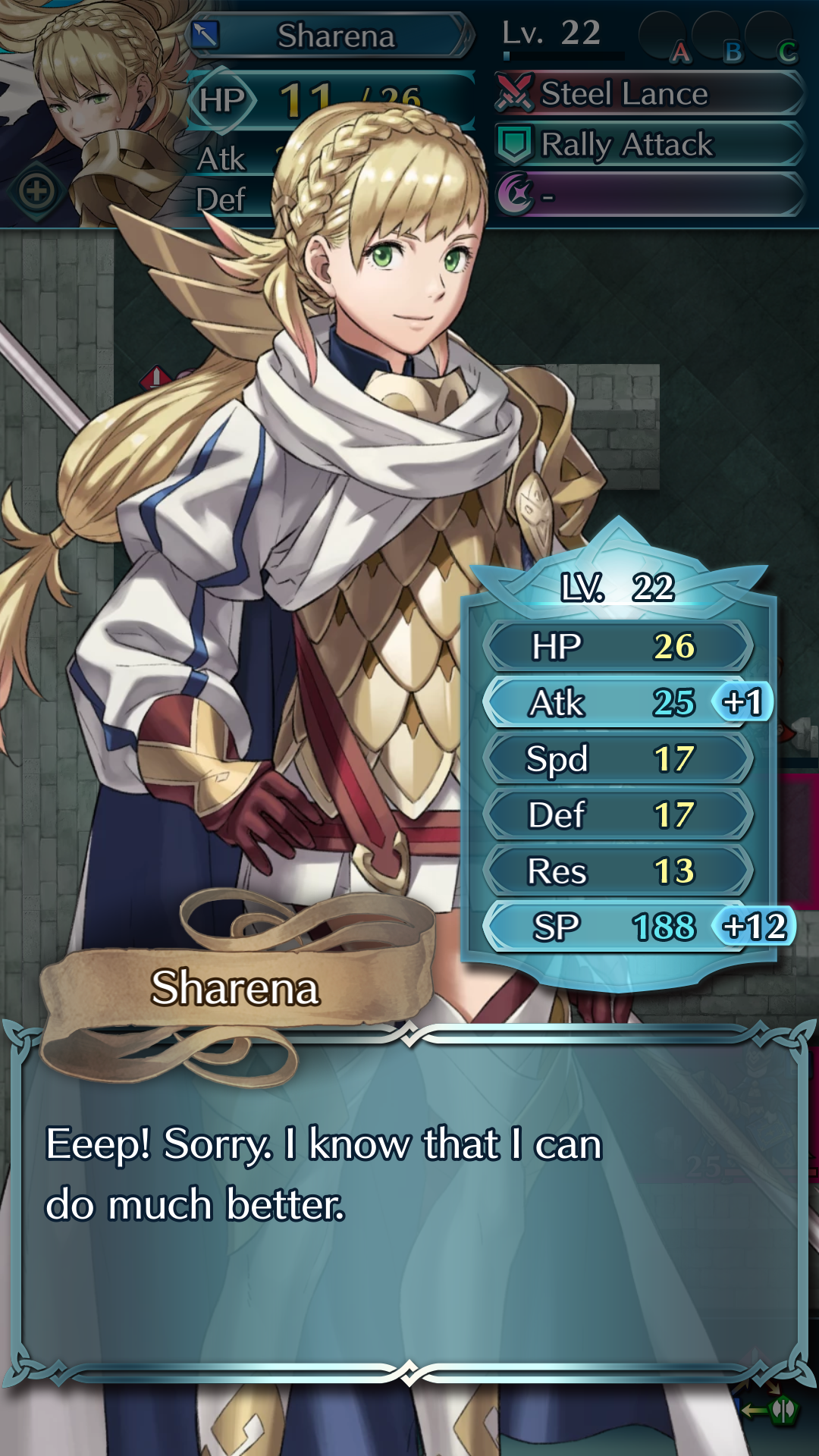 Character building has always been a big part of the franchise. While you can attempt to steamroll through each game with a few powerful soldiers, you'll often need a balanced team to get through some of the more elaborate maps. However, it's a very different way of grinding than most RPGs. Fire Emblems often lack repeatable engagements, meaning experience points are a limited resource. It's not about how many enemies you kill but how you kill enemies. The player has to get creative in allowing weaker units to get in on the action. Failing to properly manage this can leave them behind in their development, making it even more difficult to level up in harder encounters.

Heroes doesn't follow this rule. With only four active party members and the ability to re-vist any previous mission, it relies on a more traditional grind. Yet the higher level play of a mini-strategy RPG makes it a tedious process. The mechanics can be just a bit too slow and involving to simply veg out while repeating maps over and over again to level the ever growing collection of heroes. It really pushed my patience to the limit... until I realize there's an auto-battle mode.

Discovering the game's auto-battle feature is both a blessing and a curse. It does away with much of the tedium. While you can't necessarily leave the game unattended, it does remove the need to make any sort of decision. Tap the screen furiously to skip all the combat and level up screens. Then, let the EXP roll in... sort of. 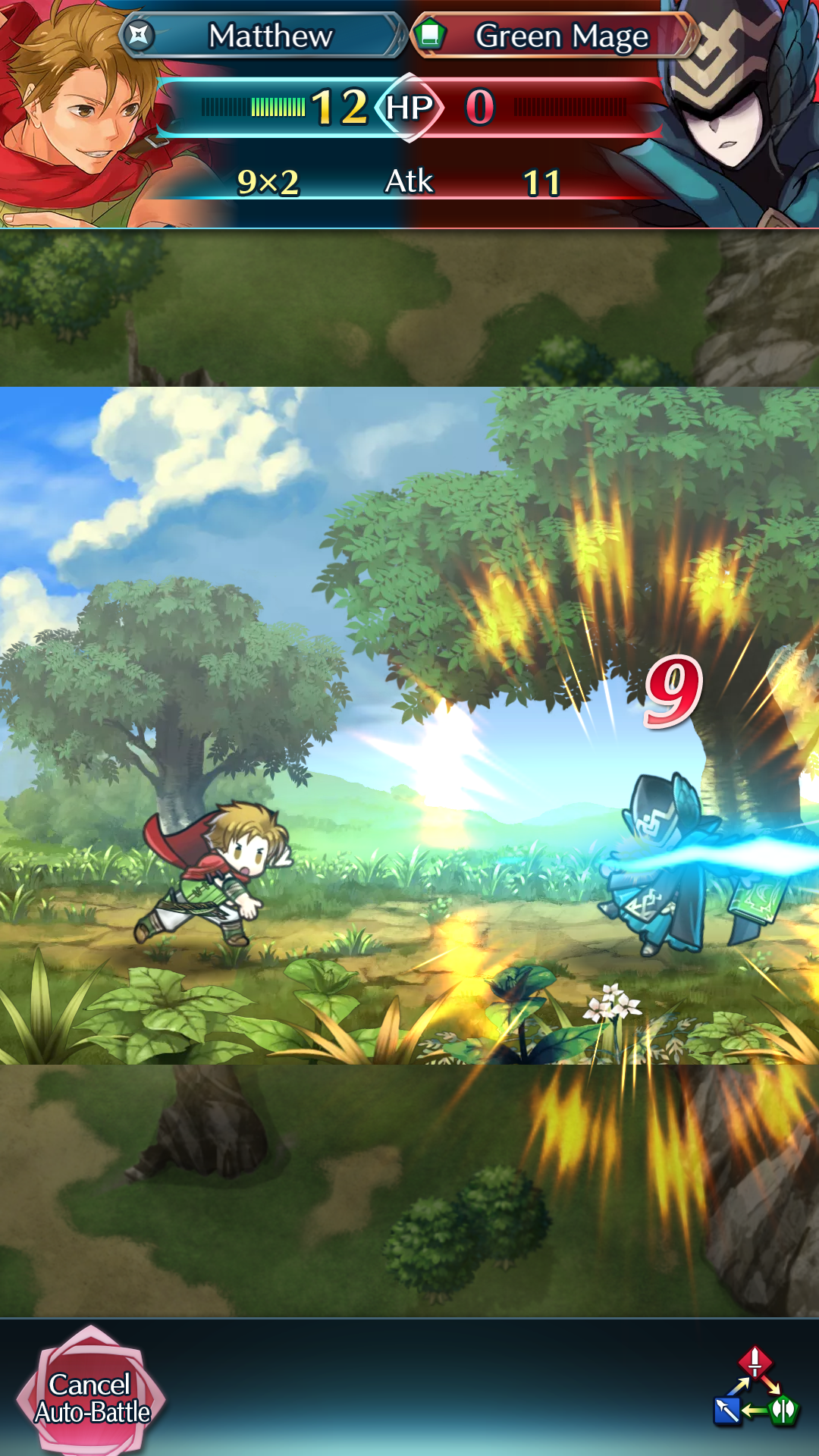 The auto-battle AI is rightfully flawed. If you watch the game play out, the AI can make poor decisions and will often end with one or two ally units meeting their doom. But it gets it mostly right. Choosing match-ups conservatively, I'd say my automatic army got past well over 90% of training missions. Unfortunately, this means there will be days in a row where I will go without controlling a single action. It temporarily transforms Heroes into a clicker, as I furiously tap away at the screen while doing something equally unproductive.

While not necessarily the game's fault that I don't actually want to play through monotonous grinding, it does raise the question of what punishment is there for losing?

Falling in battle was a core part of the series until recently. The last entry I played was the now decade old Radiant Dawn, which retained the permanent death system. Those who died in combat would forever be removed from the party. To my understanding, that's not the case in the more recent titles, at least depending on the difficulty. For awhile, I thought Heroes seemingly had no punishment for sloppy play outside of, “well, I guess I lost my stamina.” Only recently I realized those who die in an encounter do not retain their earned experience points, even when an encounter is won. 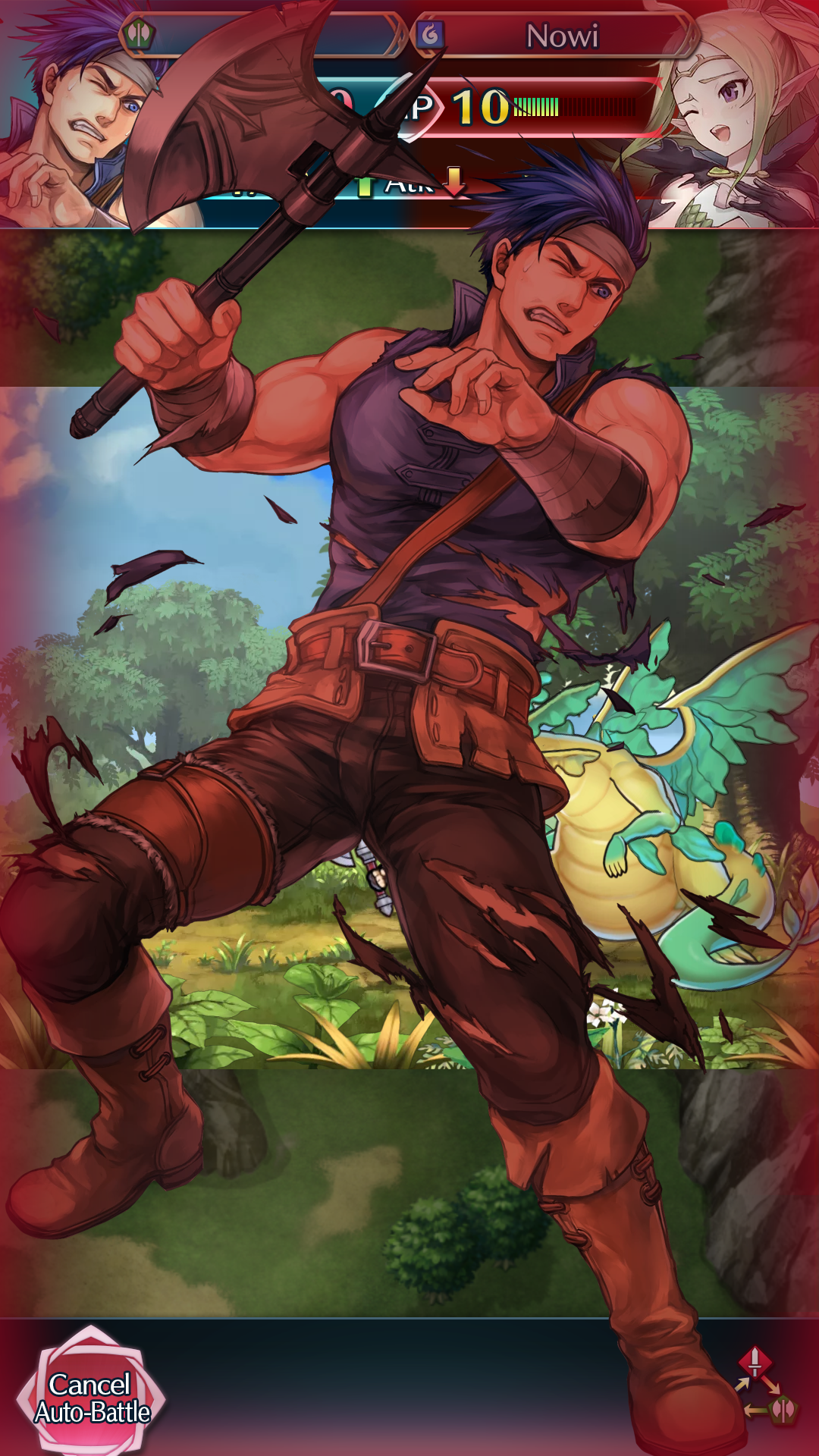 I would say Heroes still feels a bit forgiving on deaths, but permanent casualties is not the answer in a game where the player could potentially pay money for a character who can die forever. Occasionally a mission will end after a single ally dies, which surprisingly isn't too inaccurate from a traditional Fire Emblem as many people would immediately restart an encounter to avoid losing a unit.

I would guess it's a shrinking minority of players that feels that permanent death is a core component of the series. Nevertheless, Heroes at least makes an effort to insure you value your tiny soldiers' lives to some extent. It does reduce the effectiveness of grinding with auto-battle, yet feels like a fair trade for freeing up some time and using stamina that might otherwise go to waste.

Auto-battle, how deaths are handled and some other smaller important features were never surfaced to the player. I just sort of notice it after awhile. It would have been nice if the game pointed these out. I nearly stopped playing before discovering auto-battle due to the significant grind, and the game is slightly more strategic when keeping units alive rather than simply clearing each map. Those aren't pieces the player should be putting together themselves only if they happen to stumble upon it. 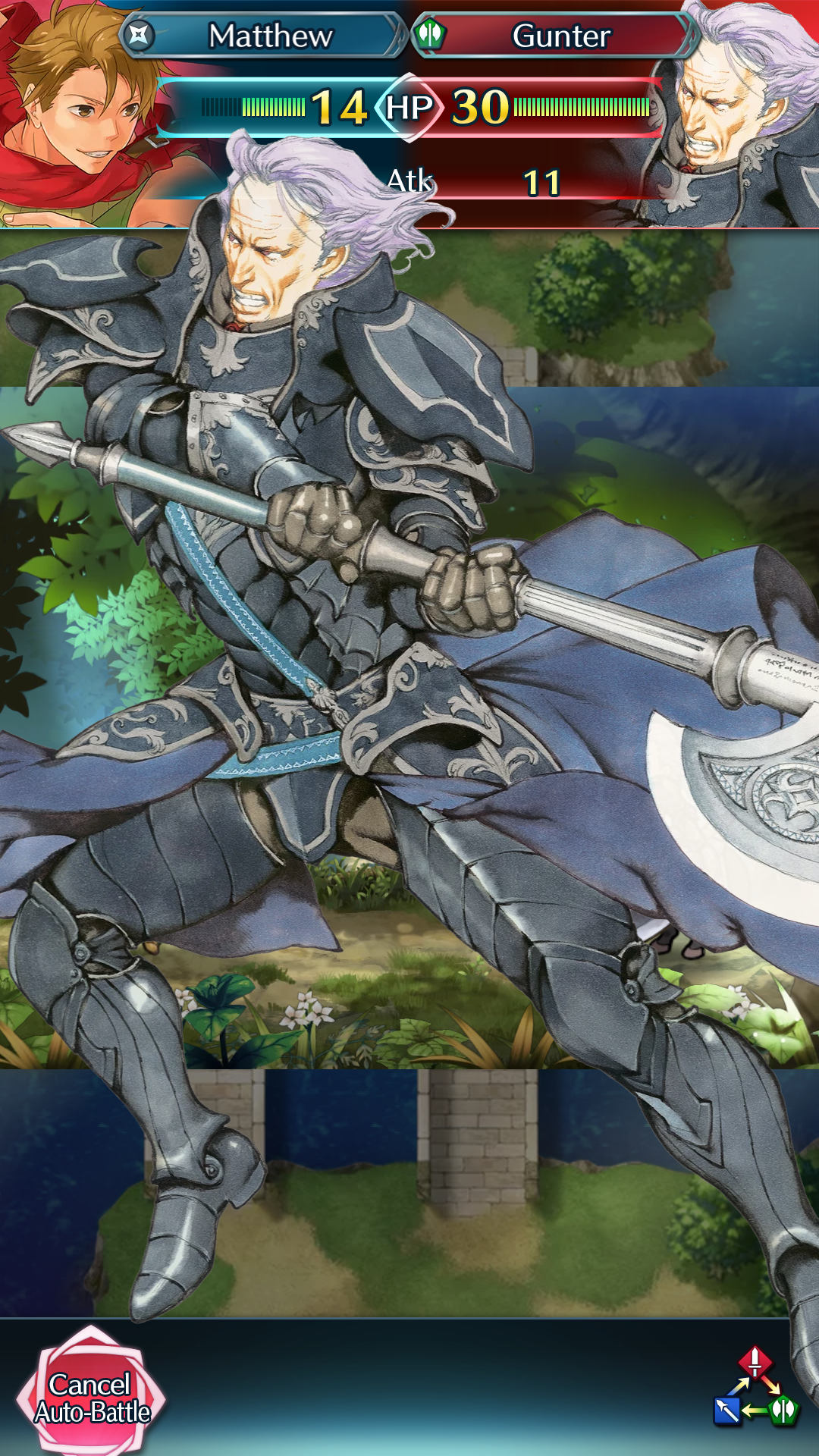 That being said, it's kind of amazing how much Heroes gets right in terms of replicating the Fire Emblem experience in small phone-sized chunks. Mechanically, my core troubles boil down to a de-emphasis on strategy and a greater focus on grinding. What's important though is that it doesn't feel like they crammed a traditional game onto a phone. They play to the limitations of mobile gaming in terms of both the hardware and the space it occupies in the average life. Because it is so successful in translating the formula, the smaller nuances of the franchise, that aren't quite right, stand out.

While it's hard to say before another main line Fire Emblem release, Heroes shows promise for fitting with Nintendo's mobile strategy. It introduces the basics of the franchise to a broader audience, while also keeping on-going fans engaged. Even I have a bit of an itch to return to the series now.