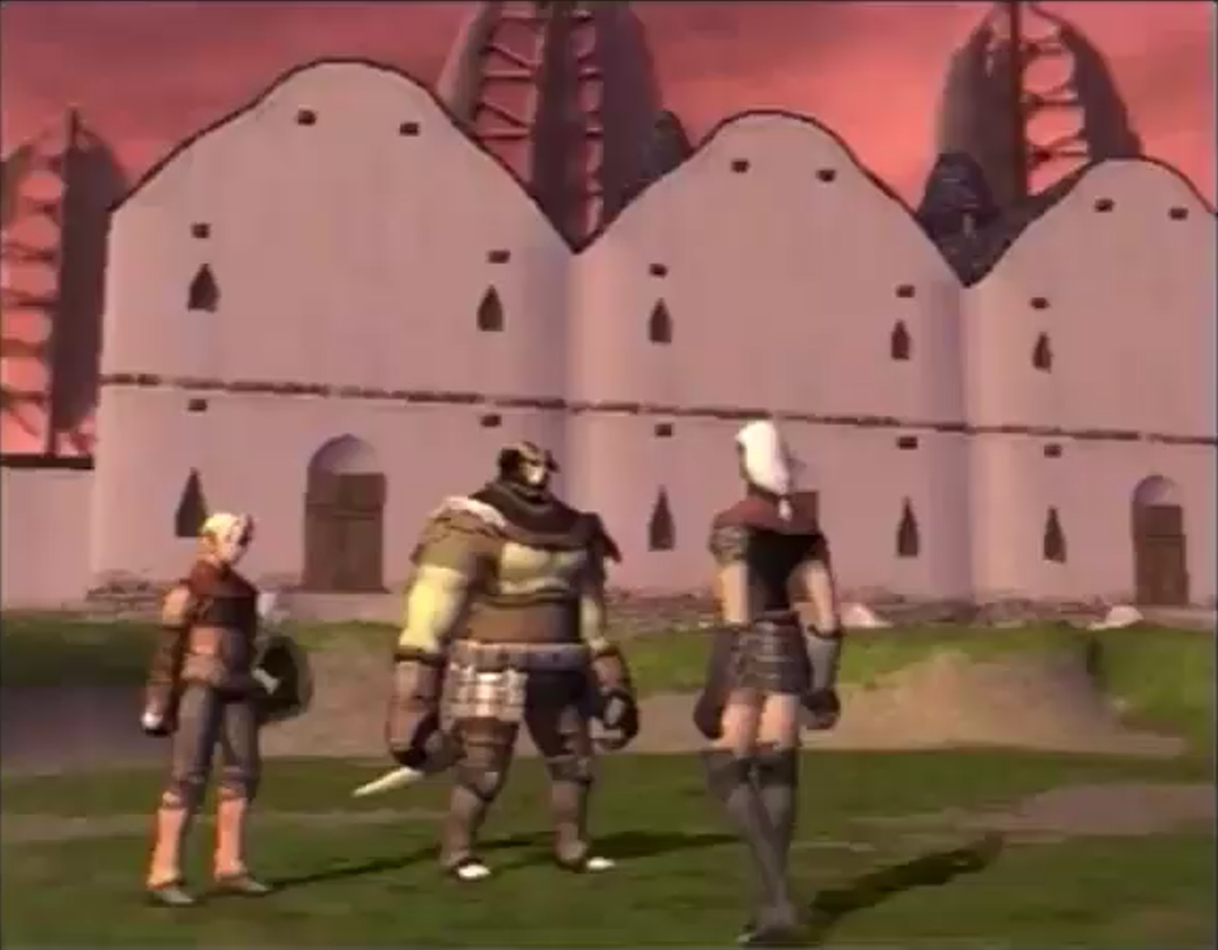 Exploring unused content that doesn't make it into a final game might be my favorite time sink on the internet. Over the years, I've spent many late nights on websites like The Cutting Room Floor and Unseen 64 digging through the discoveries of others. Exploring old game content, either via old media releases or even data mining the game itself, reveals development stories of what could have been.

Looking at pre-beta Final Fantasy XI content, there are a few major sources. Earliest of all is the Square Millennium trailer from January 2000, but it largely features concept art with a vague idea of what an online Final Fantasy would be. Square put out a PlayOnline promotional ad in America that showed a mock up, yet it's clear it was made only to serve the purpose of that video.

It wasn't until July 2001 that the bonus disc titled “Other Side of the Final Fantasy” released with Final Fantasy X. It held the first proper look at the game.

If you've played Final Fantasy XI for any amount of time, you likely know the original trailer at the start of this video. It shows off a largely complete looking Gustaberg region in addition to other areas like Altepa Desert as well as possibly Beaucedine Glacier. However other visual elements, such as the character models and animations, still look rough. With the exception of a brief glimpse at an Elvaan wearing what looks like the final game's Leather armor set, pretty much all the clothing designs portrayed here were either scrapped or heavily altered.

Later in the video (around the seven minute mark), amidst all the drama about a girl trying to date some food truck worker, there's a bit more in-game content. Of particular interest is an early town that doesn't resemble any other within the game. In four seconds, there are two camera sweeps around the player characters. The footage then moves onto field areas. 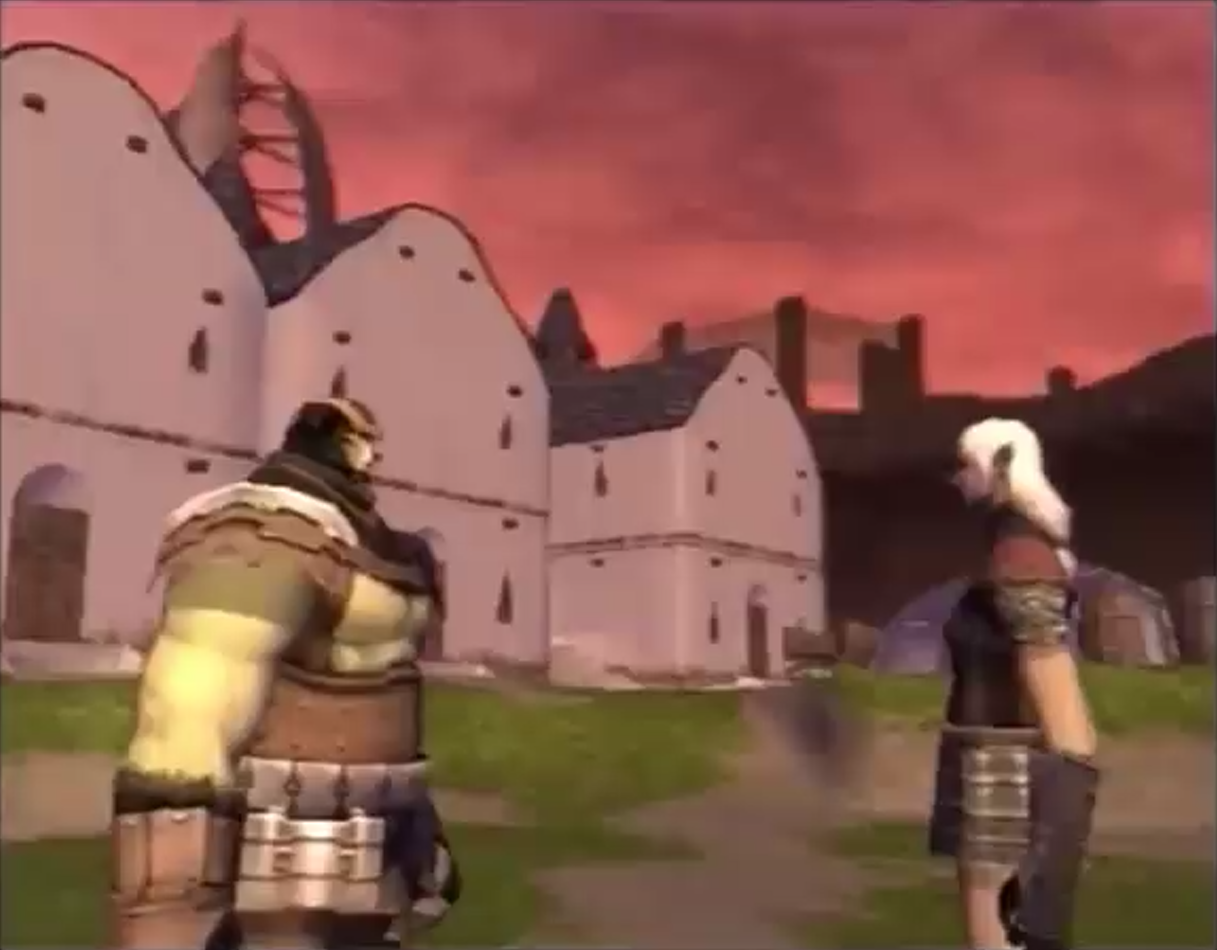 There's nothing too complex here in this little hamlet. The ground is uneven with a texture resembling grass spotted with patches of dirt. All the buildings seems to reside on raised terrain with identical models. Windmills look as if they surround the city along with thin towers featuring pointed and cut rooftops. There are some random objects and tents strewn about.

Unfortunately, due to the quality of the video, it's hard to identify objects in the distance. A couple of further off buildings have seemingly open-air first floors.

As far as I can find, the town was never seen again after this little clip... well, the inside of it at least.

In 2007, well after the game's release, a YouTube channel called beefypotatoes2 uploaded a video that showed a large unused map in the game's data files. You can actually load up the map yourself using a program called Noesis. Install Final Fantasy XI, navigate to ROM 0, select file 28.DAT... 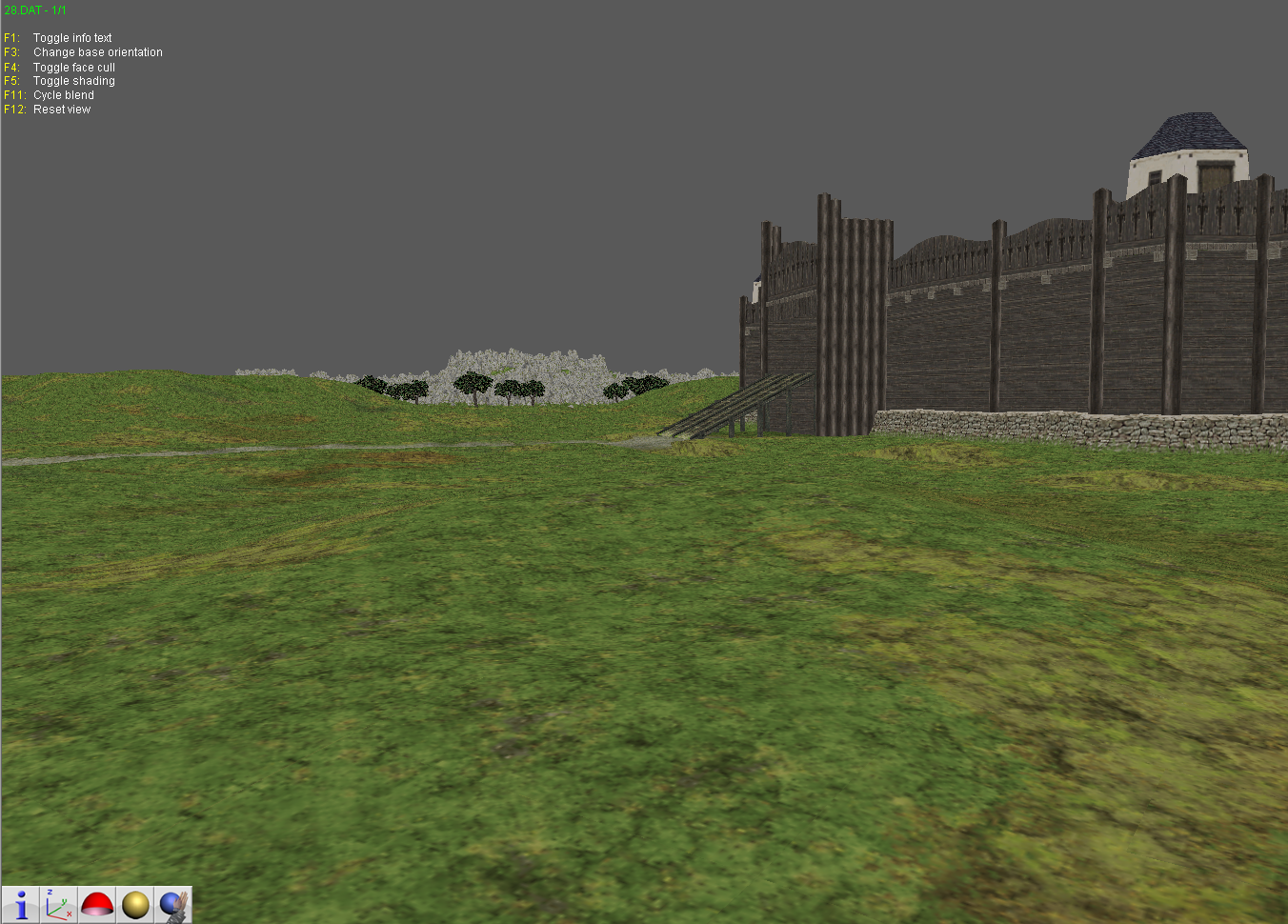 This is a fairly large zone with quite a few elements of note. First I want to draw your attention to the structure on the right in the picture above. Keep in mind the wavy fence top and the little tower poking up over head. Now let's look back at our old footage from 2001. 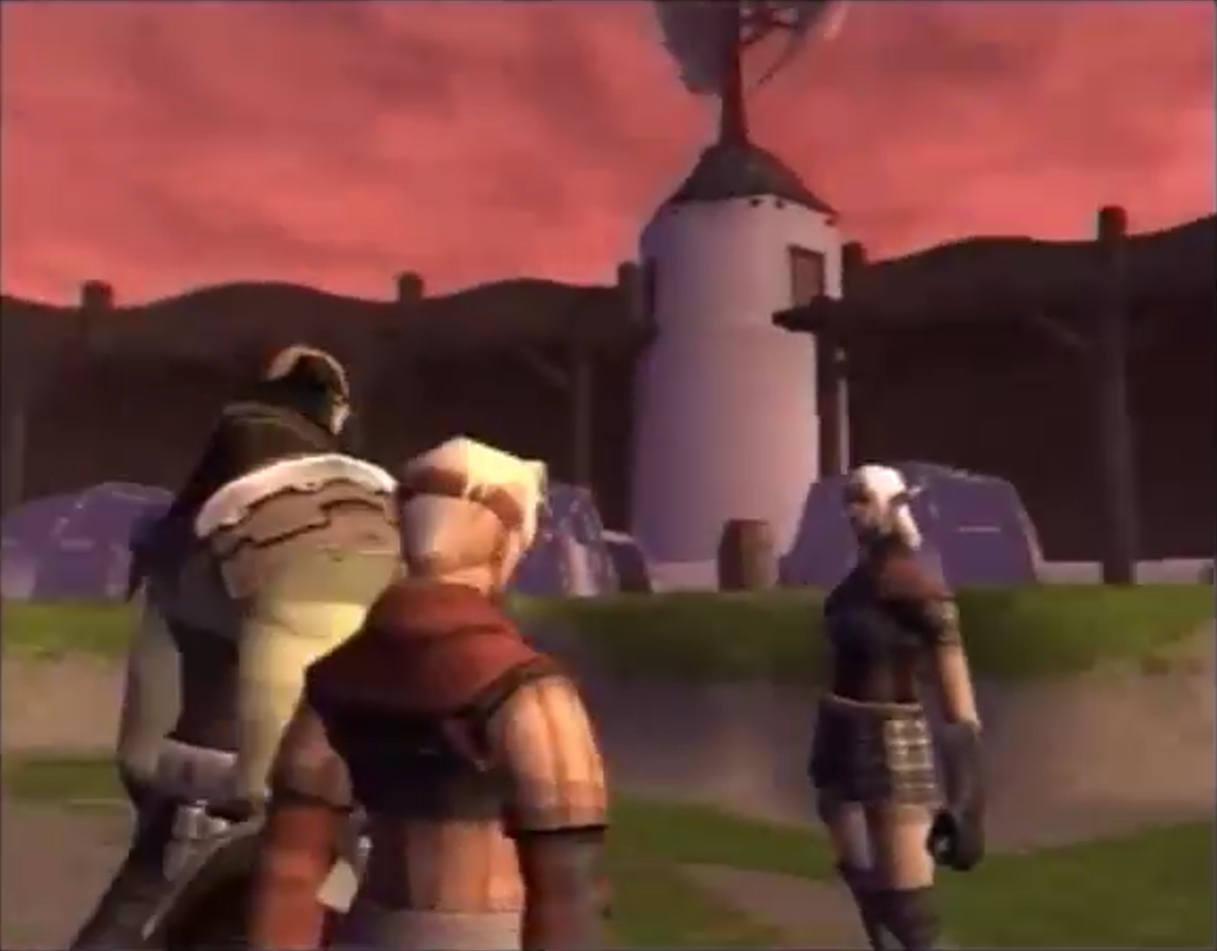 I'm pretty sure this unused map is on the other-side of that wall there. Viewing the town from above, I think this picture was probably taken about here: 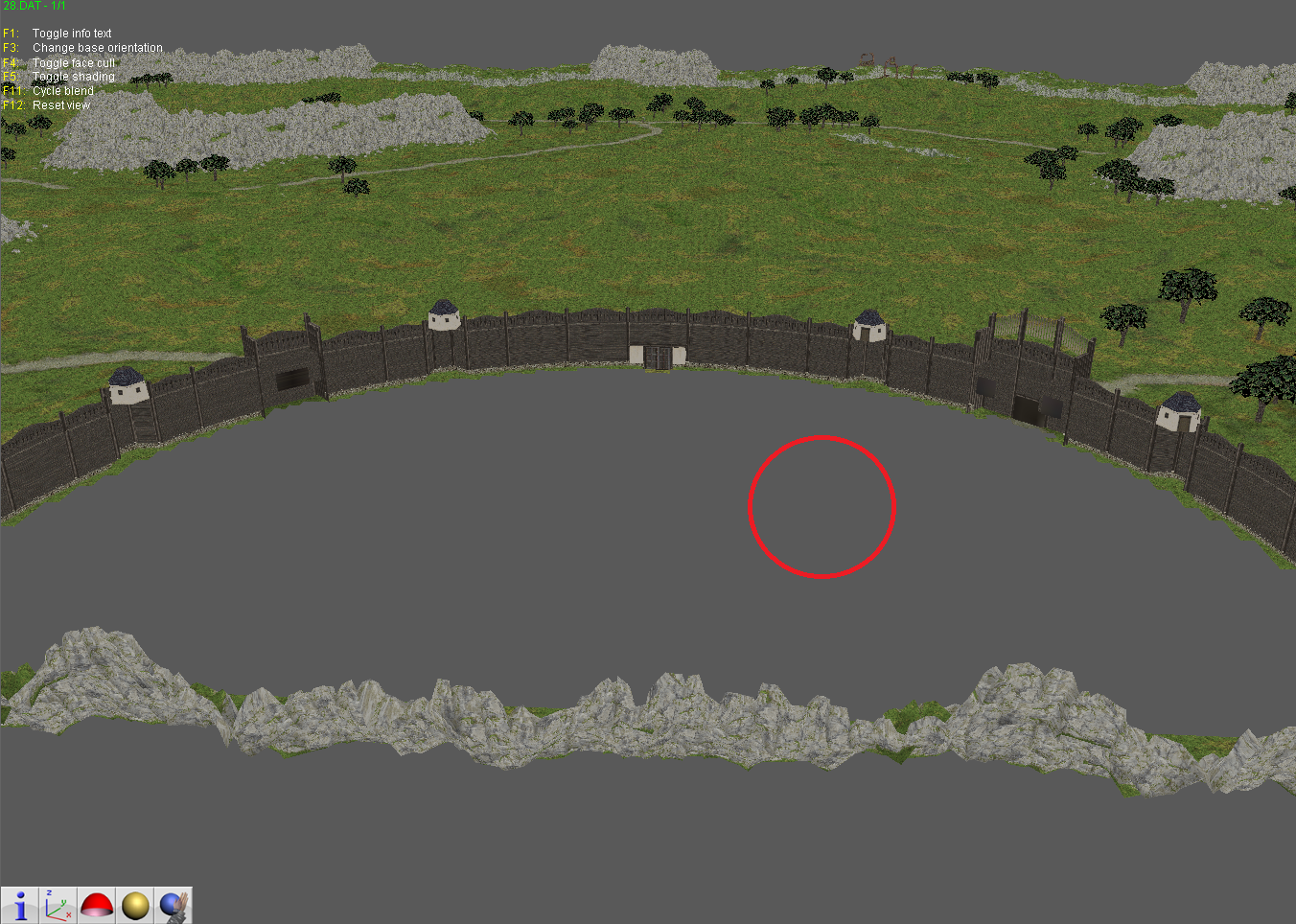 Not everything lines up. I'm guessing some changes were made during development before the map and town were abandoned.

Through exploring this map, we can learn quite a bit about this unknown town. For example, its name: 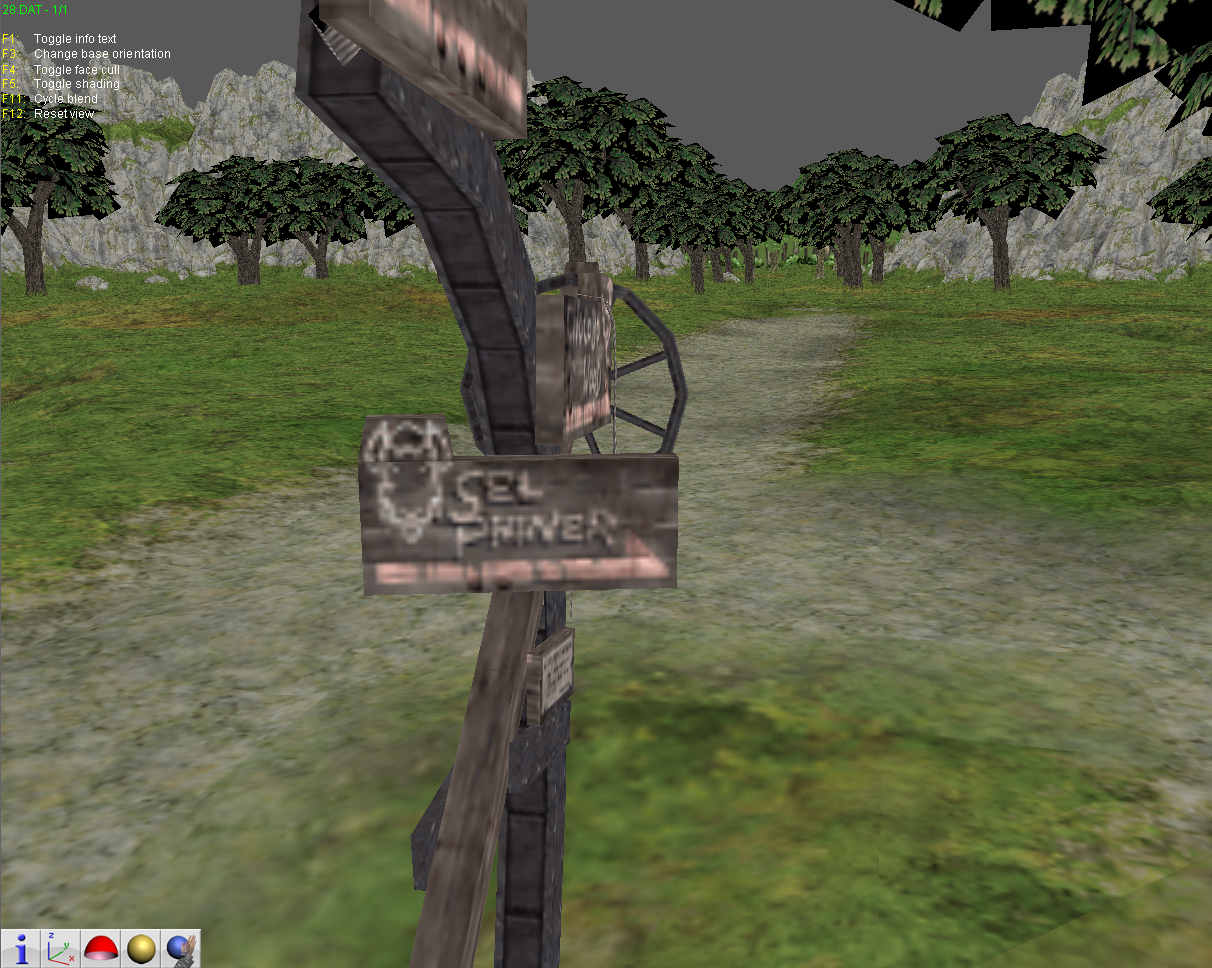 Sel Phiner, as best as I can read. That sign points to the path that leads directly to the fortified hamlet. Based off the imagery, it looks like it has some sort of ranch association. Another sign on the other side of the map has an animal's skull pierced with a sword.

I looked up “Final Fantasy XI Sel Phiner” to see if this was known. I did find some record of it, but it was in relation to the train featured in this area. Maybe they thought the fenced area was simply a train stop. Oh yeah, there's a train line by the way. 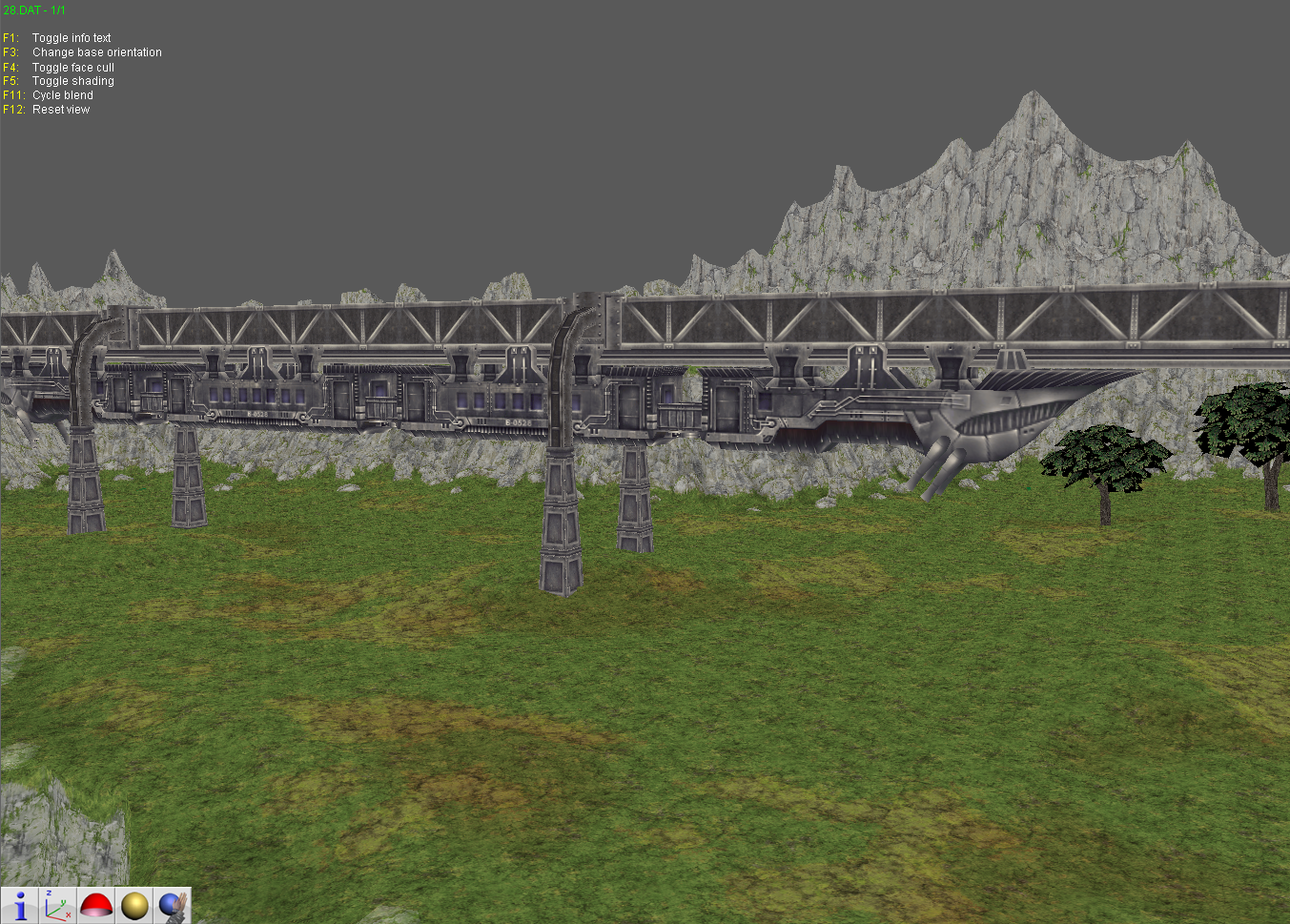 This train cuts right through Sel Phiner in a way that suggests it was intended to the main vehicle when traveling to and from the town. In the context of the release of Final Fantasy XI, it feels out of place. But given how deeply rooted XI is in games like Final Fantasy III and V, it it could have been an attempt to add some representation of the later entries. VIII specifically had rail transportation lines.

Where would this train go? Or better yet, where would Sel Phiner even be located in the grand scheme of Vana'diel if it was in the game?

Let's look at its exits. 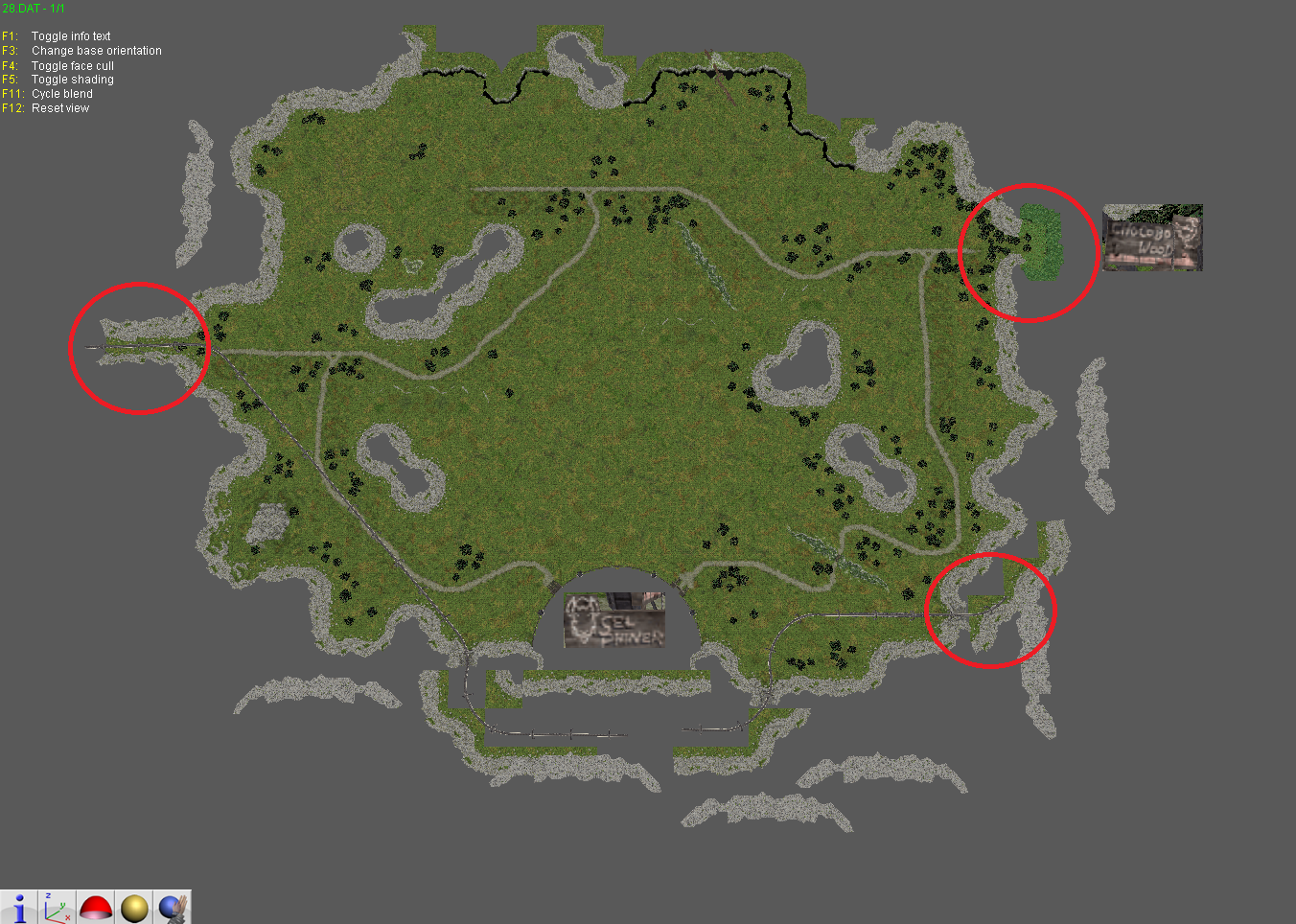 There are three zone lines to the east and west. To the north of Sel Phiner, there's also a broken train line. The large crevice makes it likely you're never intended to go this way. 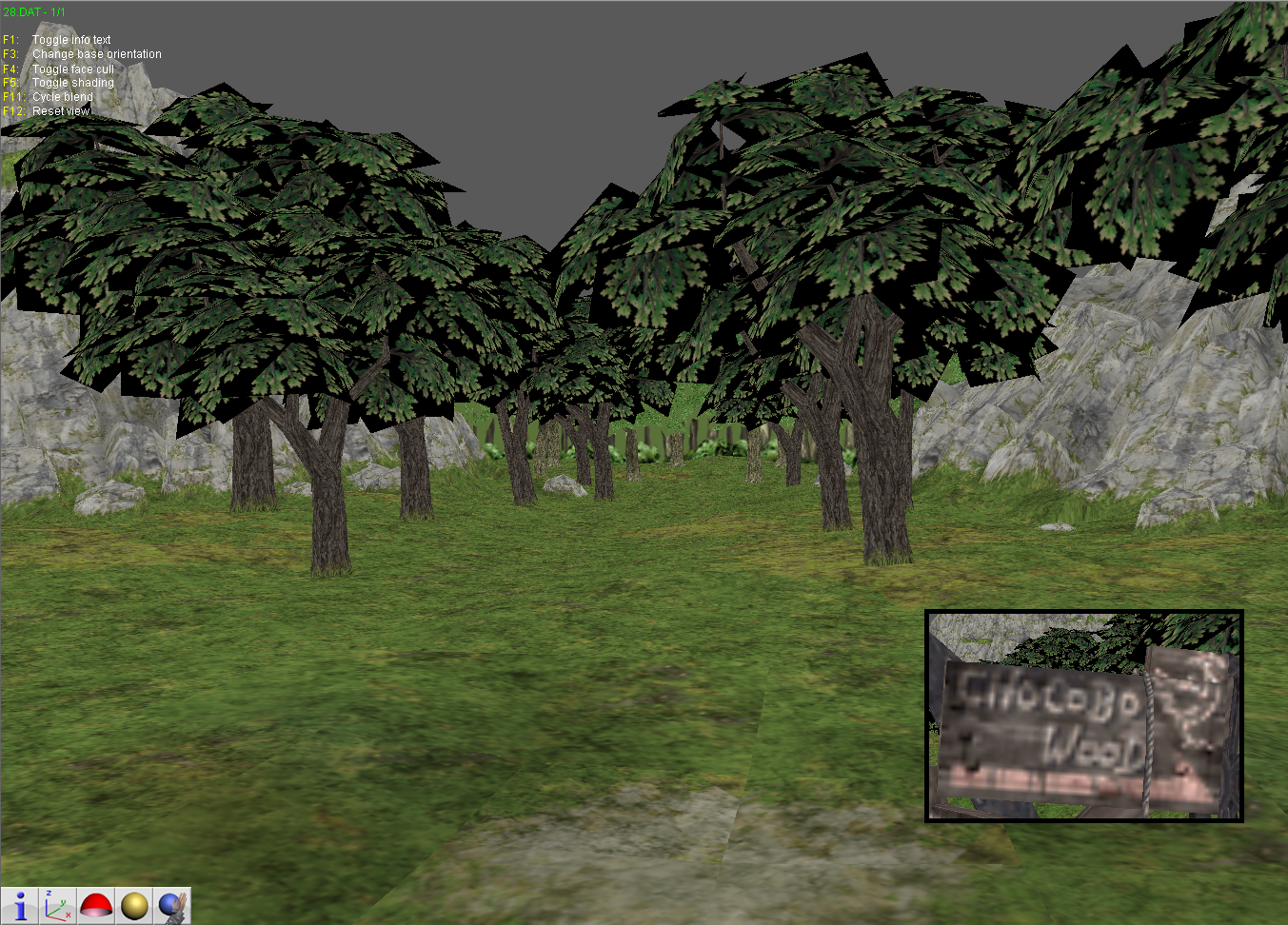 The exit to the north east has a sign labeled “Chocobo Wood.” If you haven't played Final Fantasy XI, or haven't in awhile, there is no such area. I can't think of anything that would even resemble it. The south eastern exit on the map is the train line out of Sel Phiner, which seems to either go into Chocobo Wood or run parallel to it.

No luck on the east side of the map. Thankfully, we have another zone line to the west. 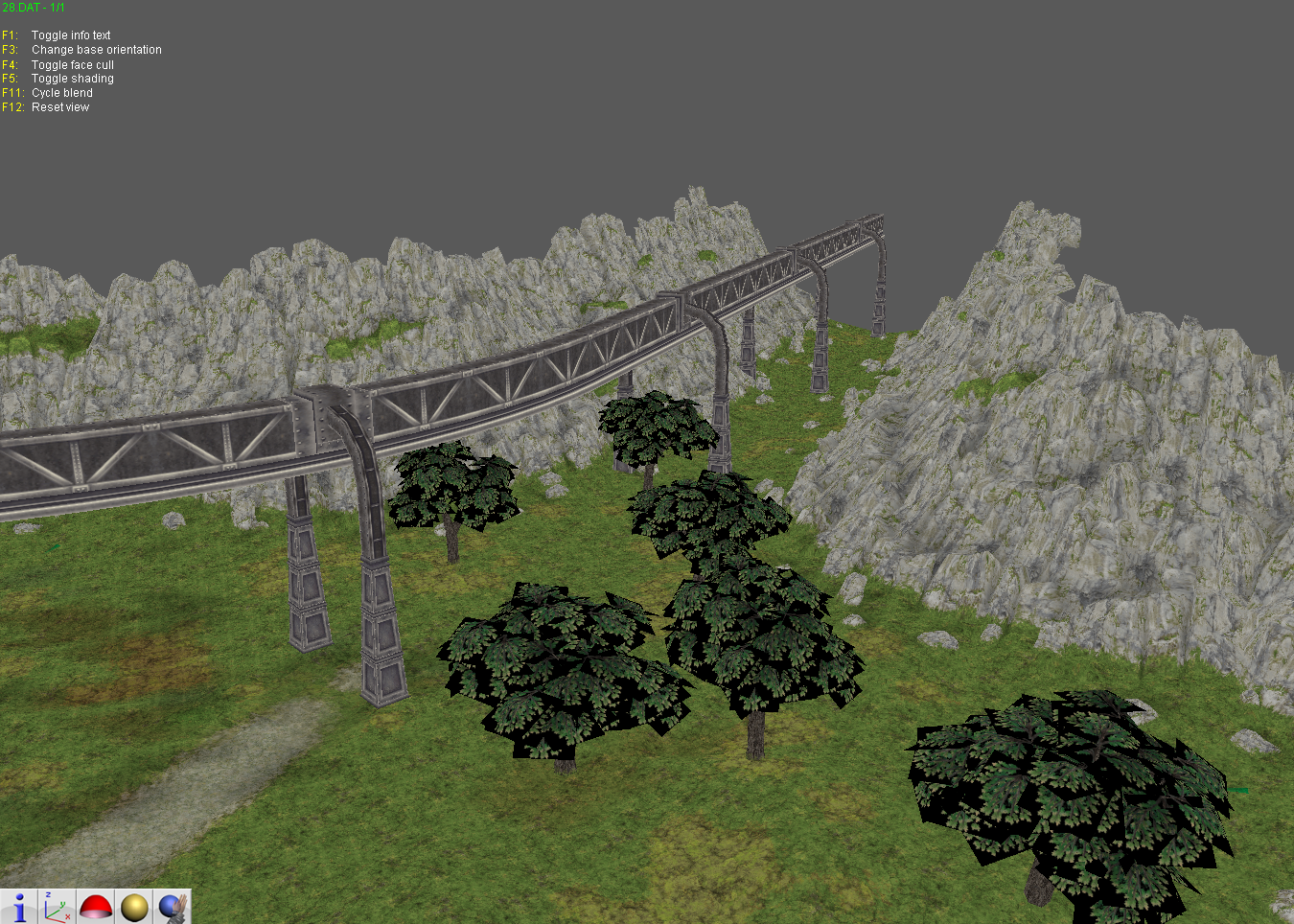 This one would be accessible by train and on foot. Let's check the sign and see where it goes. Ronfaure? Sarutabaruta? 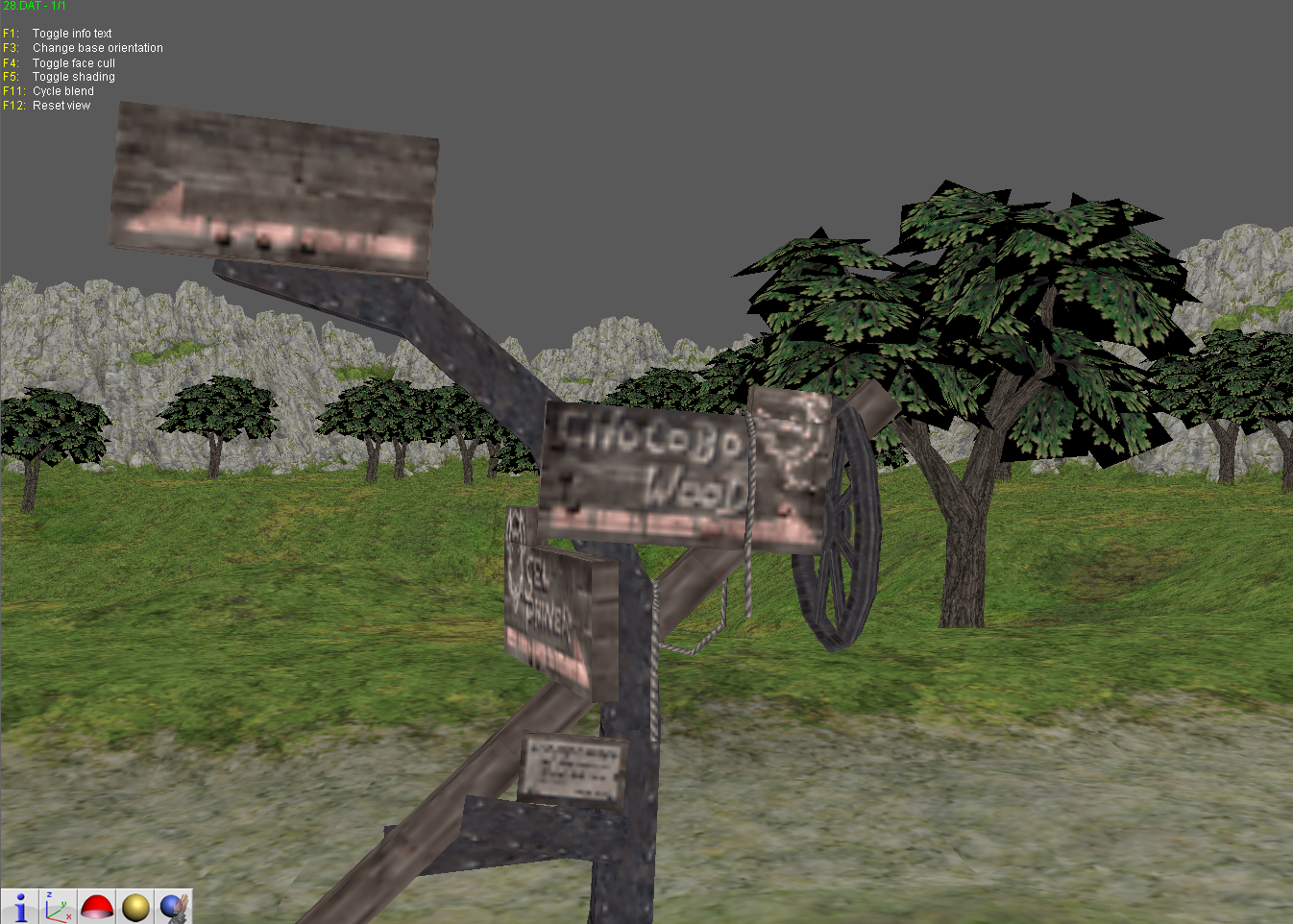 Oh. Apparently the developers didn't even know either.

Sel Phiner likely exists nowhere. Looking at the elements of the map, like the train, it's clear this is probably some of the oldest content still existing within the game. Sel Phiner could very well have just been the first town the team had made before they had concrete plans about the world design. With an area name as generic as Chocobo Wood (as well as being a reference to Final Fantasy III), I doubt it even existed in any meaningful form beyond this sign.

Honestly, by the time showed Sel Phiner in the promotional footage, I'm guessing it would have no longer even been considered for release. There are no other hints of rail lines existing at any other point of XI's development and, based of what I've read and seen, the game was largely in the shape of its final form by the beta test barely six months later. Bastok, San d'Oria and Windurst were all partially in place, alongside an inaccessible Jeuno. 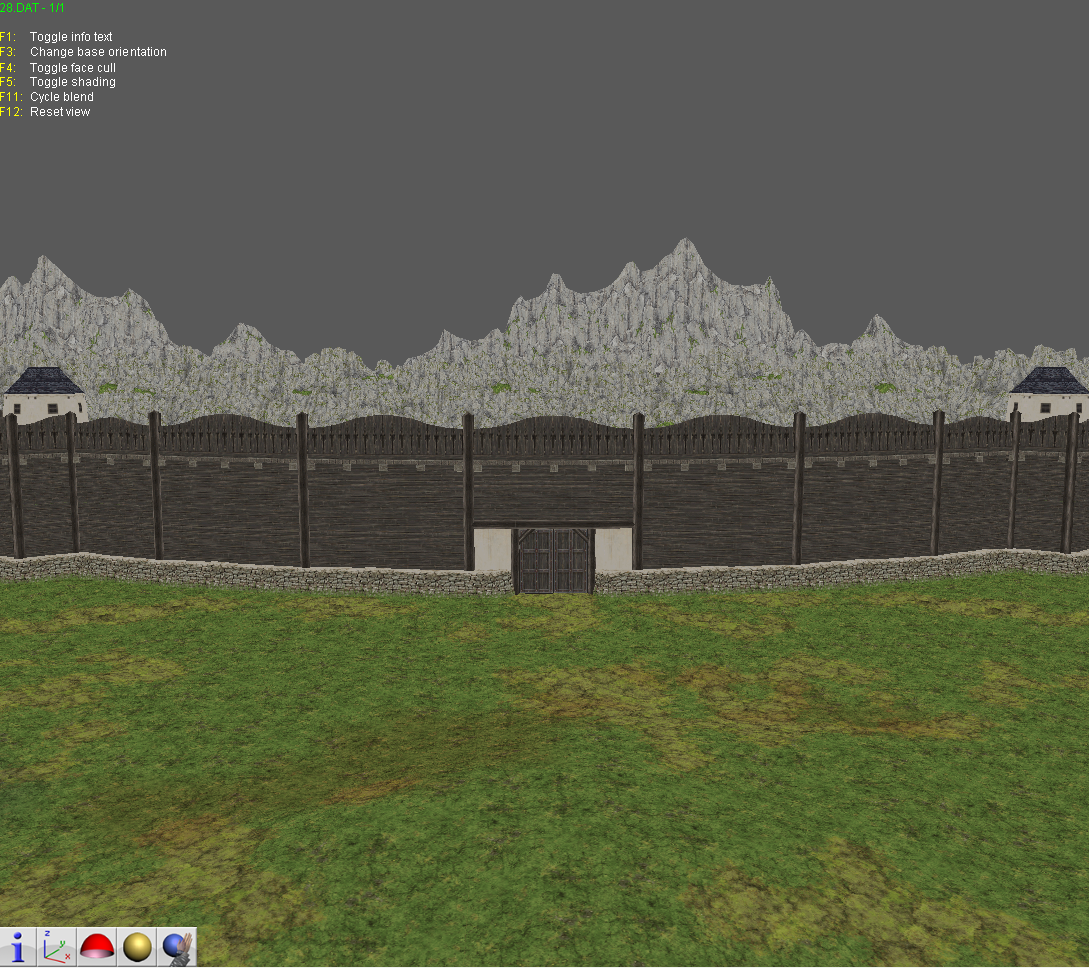 Unfortunately, unless someone finds some more left over material, that's pretty much where the story of Sel Phiner ends. As far as I can tell, there hasn't been any developments for the last decade. However, I couldn't find any sort of online record of someone associating the pre-release footage with the unused map. So maybe that's something?

At the very least, I wanted to create a relatively complete article about the key points on this zone, rather than simply relying on ancient forum posts and a bare Unseen 64 entry. If you have anything to add or contribute, feel free to do so below in the comments.

If you don't want to check the map out yourself, I uploaded a up close fly around of the area. Note that the music was added by me in post.