12:00 PM on 05.28.2010 (server time)    0
SO. Apparently hiding a C-blog and then working on it the next day then posting it will have it appear in yesterday's timeline. I knew this, somewhere in the dark recesses of my mind but still I foolishly went ahead and posted it, thinking it would go live now. As I want all of you to love me, I will provide a link to it. Just to warn you now, it's another list but since it's me, the list is all weird and stuff. Plus I included a picture of myself. The chance to gaze into my soulless, glassy eyes is worth checking out the [url=http://www.destructoid.com/blogs/Occams+electric+toothbrush/a-list-in-pictures-by-me-you-can-guess-how-this-goes--174747.phtml /]blog that time forgot.[/url]


However, since I don't want to spam the blogs with modified twitter messages, I will provide some random thoughts for this Friday.

-Metro 2033 is really atmospheric and while I usually hate tedious upkeep in games the recharge your flashlight/check your gas mask filters/etc stuff really adds to the world of the game.

-My ipod died this morning. 5,387 songs wiped in the format. I was ok with this at first but as the day has gone on I am slowly getting angrier. Fortunately, I have an external hard drive full of music but it'll be a pain in the ass to get it all back. C'est la vie I suppose but just annoyed.

-I have recently begun playing Team Fortress 2 and really digging it. I'm certainly not spectacular at it but I have a blast sniping people and the spy is....wow. what a curious and fun class to play. So yeah, it's fun but sometimes people start to talk and I remember why I hate playing online games. Allow me to share with you some gems I heard last night:

Are you on your period you fucking bitch?

Did anyone catch The Ultimate Fighter last night?

I'd beat your ass if I wasn't really drunk right now.

You got pwnd in your fat ass you fucking bitch ass trick. 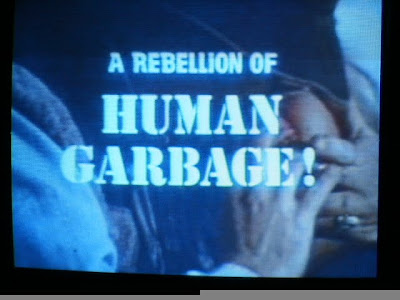 There's more but you get the idea. I included the UFC comment because the same guy who so eloquently inquired as to the ovulation cycle status of another player then asked about UFC and I just saw the sad world this guy existed in. It was a double down of human garbage. Also, did I mention that all the people who were talking sounded like 40ish year old men and that I could hear one of them breathing through their mouths? Yeah, that was pleasant. I'm sure there's some way to mute chat like that but a part of me almost needs to hear it despite the rage it inspires within me. To understand evil, you must know evil so I listen and seethe and the war in my head between gaming online and being a hermit continues. Also, the server message thing said profanity welcome but no racism. I guess homophobic, misogynistic crap is ok though?

<Occam, this is your brain. Have you so easily forgotten what people on the internet act like?>

Me: Hmmmm....good point brain. Guess my years of wandering in the gaming wilderness have made me a bit more sensitive to the foolishness of others than I once was.

<Well man up, you little bitch>

Me: ...I hate you, brain. Also, you sound like Della Reese. What up with that?

[Note: should you be a fan of UFC, do not think that I am equating the UFC with human garbage. While I am no fan of it other than the homoerotic connotations, I respect the training, dedication and willingness of two straight, half-clothed men to hug that long in public and beat the living shit out of one another. In this instance the UFC comment was the icing on a failcake.]