Quick note before you read: I tried to make the photos appear at the regular size but had no luck. In the interest of time and my growing frustration I present to you the blog with the monster photos.

Hello everyone.  How have you been?  Well, I hope.  It’s been a rather intense time since E3 ended.  It feels like the magic of those few days has been dimmed a bit. It seems like every other day there’s something to gnash your teeth over.  We lost Iwata. That one hit me harder than I thought it would.  I mean, I didn’t know the guy or anything but he always seemed nice and humble which is rare in presidents of giant video game companies. Plus, once you have seen someone in muppet form it’s hard not to feel something in their passing.

Now there’s a Metal Gear game coming out without Kojima’s name on it. That’s like seeing a picture of a magenta panda bear riding a hot pink dolphin and not seeing Lisa Frank’s name at the bottom. I won’t pretend to understand all the aspects of business, especially with something as large as complex as a series like Metal Gear.  For every blanket assessment of the correct way to do things, there are probably a hundred decisions and moments that lead to what we see. Understanding that as I do, I can’t help but think Konami is fucking up. First, Silent Hills which…ugh, losing that one still makes me wince but now Metal Gear is in a tenuous place at best. I hope that Konami can figure it out. Heh, I hope Konami can figure it out. Kinda sounds like I’m talking about someone I know.  “I hope Steve can figure out that artisan candle booth at the crafts fair.”  Lordy.

But it’s not all gnashing of teeth.  We have some smiles thrown in the mix.  Rainbow sprinkles on the cupcake that is life. For example, I am currently watching one of the sixteen Pirates of the Caribbean movies. There’s this big fight scene going on and you can tell who the professional fighters are. Lots of back flips and pirouettes and movements as fluid as quicksilver.  Then there’s everyone else. They are kind of doing the pee pee dance with swords.

I’ve been playing Final Fantasy XIV: Heavensward mostly. My ninja is sitting pretty at 60 and I’m working on gearing up for the Alexander raid.  Is that a raid or a super dungeon?  Did I just make up the term super dungeon?  Isn’t a raid just a super dungeon?  These are the questions all people must ask themselves at some point in their lives.  It’s a fun game.  I love the idea of playing in a virtual universe.  It’s one of the core tenants of rpg-type games but I will never get tired of discovering new worlds and embracing the experience it has to offer. That’s why No Man’s Sky has me so excited.  I’m still inclined to be cautious about what the game is promising but the idea of getting in a ship and just going is so appealing to me. Man oh man alive I hope it delivers.

I watched Jaws 3-D recently.  I remember being terrified of that movie as a kid.  It was that scene where the shark is slowly coming at the control room and everyone is stupefied in horror. 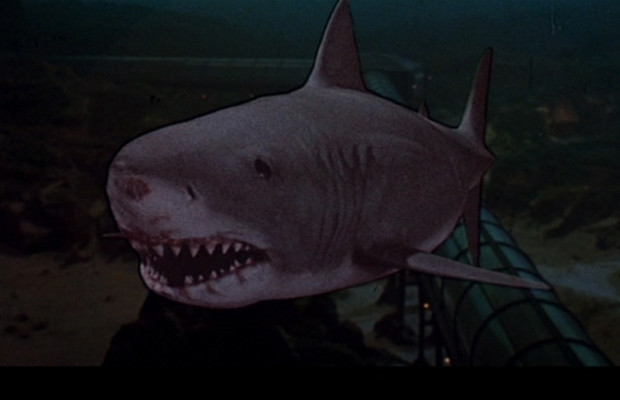 To a young Occams, this was nightmare fuel of the highest order.  Now it is unmistakably terrible and delightful in equal measure.  Isn’t it nice to be able to revisit childhood fears and see them for what they always were?  Like Stephen King’s It. I know, I know…Pennywise will always be unsettling but I attribute that more to Tim Curry’s acting chops rather than the idea of scary clowns. Movies like that destroyed me as a child.  I’m talking shivering under the covers waiting for demons to pull my skin off. Now, that fear is a fond memory.  It has been processed and compartmentalized. Now that fear sits as another objet d’art on the eternal shelf that is my mind. 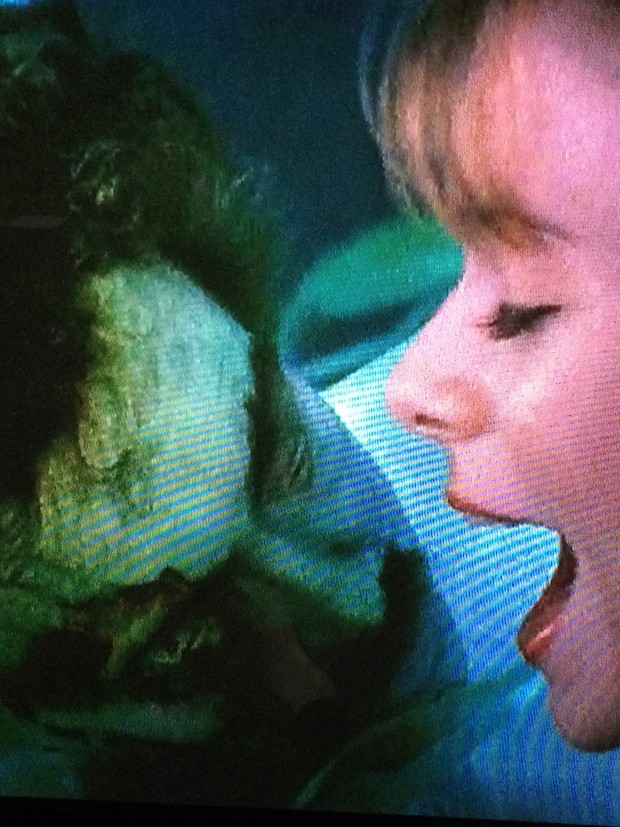 This is my favorite scene in the movie.  The girls gets pushed up against the glass right as a severed head floats by.  She screams and the camera just stays on her for 5 seconds too long.  In this screenshot it kind of looks like she's giving head to an invisible cock. 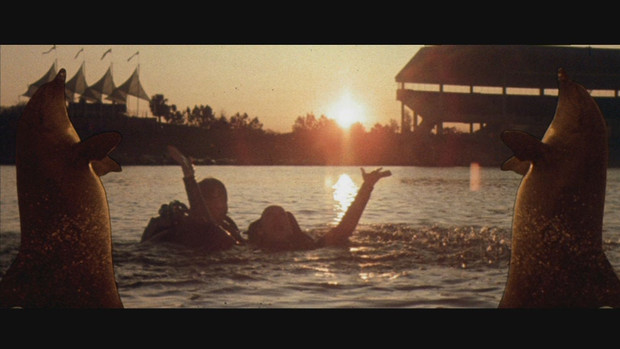 The is the final scene in Jaws 3-D. I look at this and think I know where Lisa Frank got her inspiration. 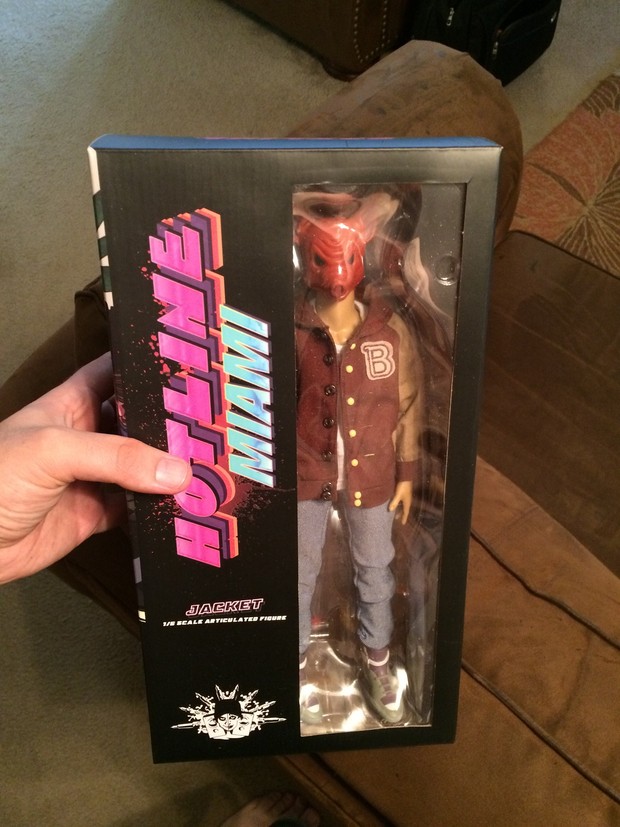 Check this out!  I backed a Kickstarter for this Hotline Miami doll and it finally came in. Pretty slick looking if I do say so myself.  I know you can’t see it in the picture but it comes with some weapons and a few different masks.  I love the art style and have been trying to get some ephemera to display in my waking world.  Well I jumped at the chance for this and I am very glad that I did.

Side note: one of the cats just sneezed and is making a face like Egg Shen from Big Trouble in Little China. 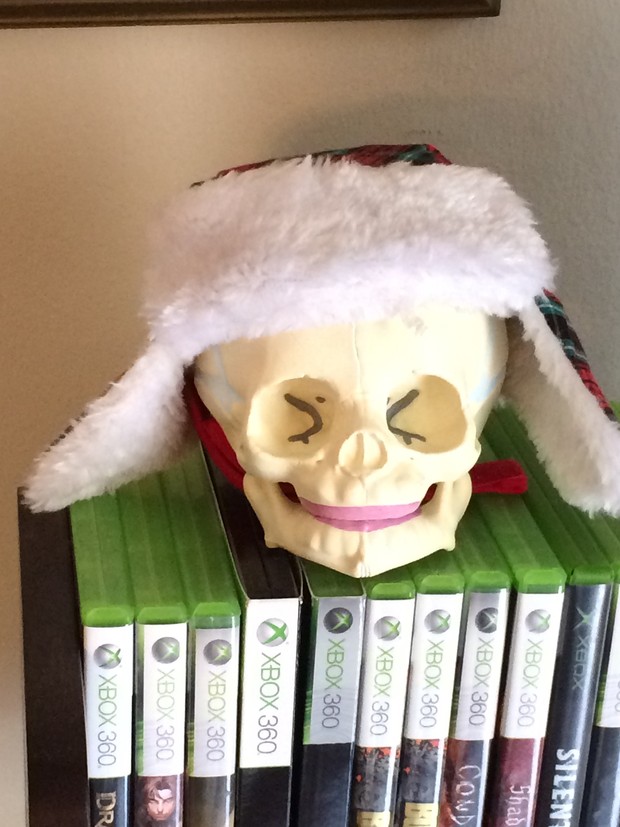 I put a tiny winter hat on my model baby skull. I will never be a parent but I believe I understand the true depth of paternal love. 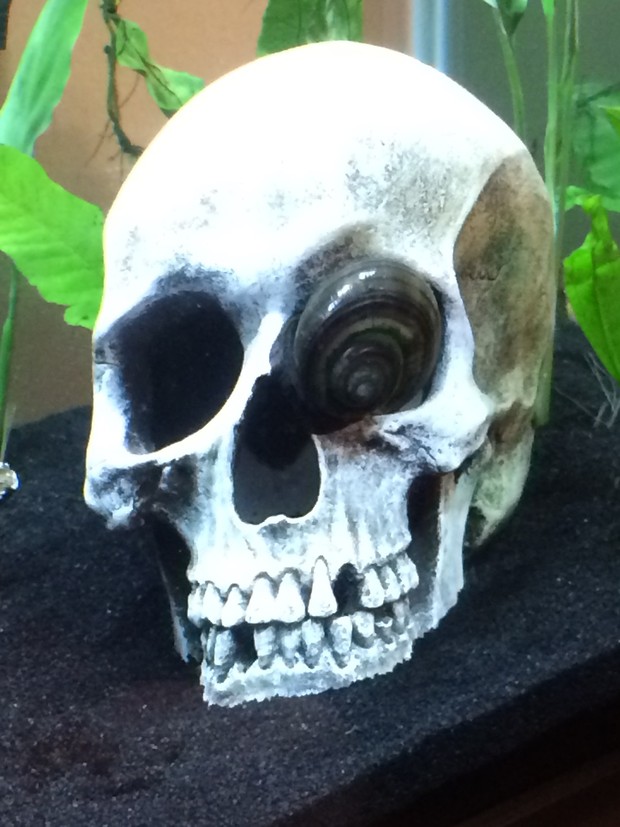 This is my black apple snail. Snails are awesome.  Also, Black Apple Snail is my Gothcore band name.

Life is an amazing and beautiful experience and each day, no matter how dull or oppressive it feels is a chance for you to learn something and grow and smile.  Find beauty on your own terms and thrive.  Not every day has to be one for the great stories of history but it can be a personal victory for you. Little moments, folks. You gotta take joy where you can.