The Scoring Status Quo Has Got To Go. 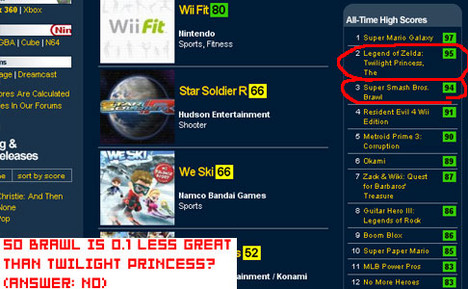 Really, what does it add? Does it make that big of a difference if a game is an 8.7 instead of an 8.8? Does it mean the higher scoring game is inherently going to always be better? Of course not, so why add the extra decimal points? I personally think it's just to seem cool, and that it adds absolutely no value. The only time decimal points really truly matter are mathematical equations and money. Further more, they add more emphasis that the scoring system is like your school's grading system, which is the whole problem we're dealing with in the first place, right? Right.

So, if you might have guessed, I'm going to propose that gaming sites and publications rethink their scoring system and steer away from the 10-point scale, something we only really see here in the world of video games. Really, go look around. It's in video games and figure skating. We need a new way of reviewing games... or at least one that's less complex and confusing. I personally think it's time to either switch to a letter grading system or to a five-star system with no half-points, but we need to come up with something that's different from the number and alphabet soup we currently have.

I'd like to hear what you've got to say on the issue, though. Thoughts?
#Community
Login to vote this up!

Oh, hi there. Didn’t see you enter. Anyways, welcome to my humble little blog. For those of you not familiar with who I am, the name’s Brian. I’m 24 years old and hail from Findlay, Ohio. I work at the local newspaper here as a copy editor, putting my four long years of college to actual use. Kind of. I think.

I've been gaming since the relatively young age of around 3 and I've played plenty of games, both good and bad. I'm continuously expanding my gaming collection, which has become more of an archive in recent years as I'm focusing on collecting older, less well-known titles. You'd honestly be surprised on what people are missing out on in bargain bins... Other than gaming, I love anime, manga, sports, movies, TV, and a whole lot more. I also happen to have something of a legendary love for Cammy, to the point that I am the site's unofficial official Cammy fanboy. And yes, I do play as her in Street Fighter and do so quite well, too.

Also, I am Chad Concelmo's B.F.F., my prize for coming in first in The Great Retro Quiz .18 - ActRaiser. Accept no substitutes. Not even Aerox.

Mad props to Ghost for this amazing card!