A "Tales of" fan retrospective 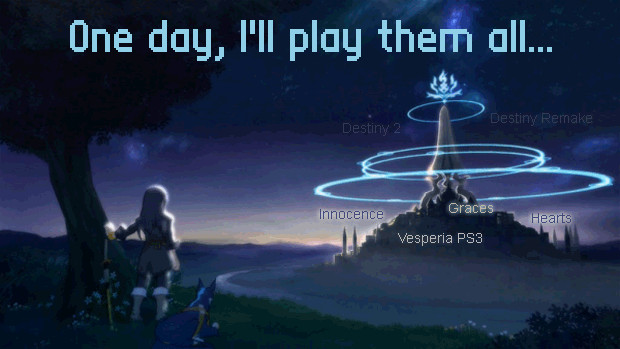 Ahh, the Tales series. I remember the journeys, the excitements, the various platforms it made me buy. A tales games on a console I don't have is not conceivable. I will buy the console for this game alone.

It all goes back to my Gamecube era, in which Wind Waker and Metroid Prime stood king. And with Golden Sun on my gba, I was satisfied. Those games were masterpieces (Still are). The next significant experience was just around the corner. I turned on the tv to watch a rerun of a video game show. Featuring Tales of Symphonia, huh? The first few seconds of gameplay I saw were enough, I needed that game. I ran to my game store, bought it, played it, instantly fell in love with it. The art style, the music, the story. The combination made it perfect. 200 hours? Absolutely.

I didn't have a PS2 yet. Why? I was a kid without much money. You invested in the one console you chose, right? Forward to 2005. I'm starting college. I get access to the internet at school. I begin looking up any Tales related information... Tales of Legendia is coming within the next few months. IMPULSE BUY. A Slim PS2, courtesy of my student loans. :D Again, a great game for me. Not as good as Symphonia, but still good in its own right. By then, it wouldn't matter what Namco Bandai would release, I would buy it day one. Phantasia on the gba, followed by Abyss. I was a big fan that couldn't get enough.

The psp had been out for a while. I wasn't even remotely interested in it. I found out that Tales of Eternia had been released in the UK. Awww, PAL restrictions ................ what? The psp is region free? IMPULSE BUY. A psp 2000 and an imported copy of Tales of Eternia. 20 hours of PS1 goodness. I really was clueless as a kid. I missed almost everything on the PS1. If I could get my hands on an english tales game, I would do everything to obtain it. I say "english", the japanese counterparts of the Tales series were out of the question. What is there to enjoy about something you don't understand, especially a rpg? I wasn't too mad at Namco for not releasing them here, just disappointed.

2008 : Out of college, working a nice job. I buy a 360 for Tales of Vesperia. A-m-a-z-i-n-g game. Lovable characters, colorful world, doesn't take itself too seriously, exciting battle system. This is my best game this generation. 180 hours to get through everything. When I finished playing, the PS3 version had been announced, only in Japan. I have played NIS games, Atlus games, they always release their games overseas. But an established franchise such as Tales, Namco being a whore like all big companies, why can't I get Tales of VS, Graces, Destiny Remake, Innocence, Hearts... ? Fuck? Yes, FUCK! Japanese courses are looking sexier by the day.

I recently stumbled upon a Tales of Hearts translation demo. Somebody released a patch for the first 15 minutes of the game. Needless to say I tried it right away. It's fun. Freaking, fun. I'm left with an even bigger need. Tales of Innocence is being translated as well. It's almost done. We are left to wait for an awesome team to translate everything themselves.

I love the Tales series. Every experience is magical to me. I do hope we can get more titles. But Namco won't care for us. E3 is coming, they WILL announce Tales of Vesperia PS3, AND graces. Otherwise, I will ................................... CONTINUE WHINING ABOUT IT. XD Good going Namco, continue releasing one title here while three are being released in Japan. The fans are loving it. The solution is simple, I would give the license to Atlus. They never let us down.

* I did buy the various consoles at first for Tales. Afterwards, I came to appreciate the systems and got a good collection of games for them. Fifteen Ps2 games, seven 360 games, ten psp games (I can't wait for P3P).
#Community    #Rants
Login to vote this up!

I'm Nic128, 25 years old, gamer since 1991. Started with a SNES and worked my way through the generations. I got a NES after my SNES though, well, whatever.

I discovered this community a few years ago. I then realized, damn, there are civilized people that love and talk about video games. Awesome.

I suck at anything FPS, RTS, MMO. Unless I'm playing with friends, I don't play competitive games. I get angry when I lose against better players.