To fly through space 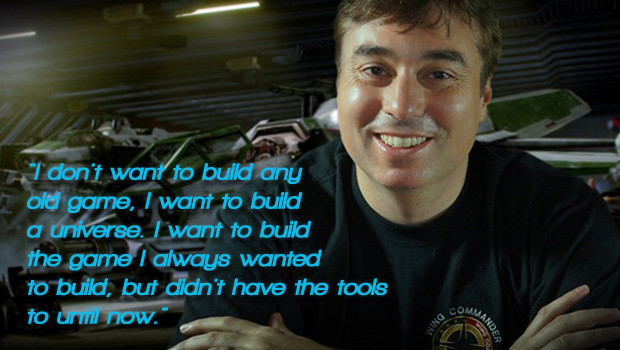 In this rocky climate of major studio closures, of games pumping in DLC and Online Passes to try and make a return on their bloated budgets, of 3 million plus sale "flops" like Tomb Raider, developers like Roberts are trying to find a way around the system, to make the games they want to make for the audience who wants them. If it's true that the industry can't sustain the current course of super high-budget games, and the only solution is incredibly tight DRM and even more price gouging, we all should be looking for another way.

The dream to fly through space. The promise of returning to the age of deep simulation, more immersive than ever before. Of finally living out that geeky sci-fi fantasy of being a Malcolm Reynolds-like smuggler, or a hotshot rebel ace, in meticulous detail in a living persistent world.

But he's also selling another dream, the dream of a new age in game development. A world where ambitious games can be made without groveling and begging to a big publisher. A democratic utopia where gamers vote with their dollar to see what games get made.

I want to live in the worlds Chris Roberts is trying to make.
Login to vote this up!