I'm Dribbling All Over You, And Not One Of You Can Stop Me

I've been dipping in and out of lots of different games this past month. I’ve been a bit restless. Nothing I’ve played has jumped out and demanded to be written about at length; I keep grinding to a halt at around the 600 word mark. And so, here we are. For the masochistic few who can tolerate such a contemptuous disregard of their time, this blog post compiles two shorter dribblings I’ve written on the games I’ve spent my time with.

I just wanted an excuse to type out that title, really.

This game seems to have an appallingly low profile. After a few early hours of play, I was astonished to go on YouTube and find that only four, maybe five videos have covered it. This is a travesty. Wipeout 3 is so obviously a masterpiece.

Wipeout 3 fuses the grungy, turn-of-the-millennium apocalypticism of its PS1 predecessors, with the sleeker designs of its later sequels. From this point onwards, Wipeout would be an aesthetically complete series. The music, the skyboxes, the menus and their fonts: where earlier games were a little clumsy and cluttered, everything here is synthesised to express one unified vision. The team brought The Designers Republic on board to apply the style and precision that they brought to their boxart – their "maximum minimalism" – into the level-design itself.

The result is a 'total work of art', the player enveloped seamlessly in a world: ducking under the low rumble of trains, spiralling through gulls and dockland in a late evening sun, the tracks curving and careening, all built with an artist's grace. I have the much more flashy (but much less artful) Wipeout 2048 sitting in my living room, unplayed; I really was not expecting its twenty two year old sibling to capture me the way it has. That it has done this (against VR-enabled competition!) speaks to the power of Wipeout 3's focus and refinement. The tech of VR is neither necessary nor sufficient for a game to be ‘immersive’. Tech can be trumped by artistic skill.

The sense of Wipeout as a breathless rollercoaster ride is never more potent than it is here. The controls are so floaty, lagging far behind your input, that you feel barely in control. You know that you are in control – you must be – but you are not quite sure how. The gap between your intent and your on-screen movement is so wide, and yet it all just seems to work. It's like an out of body experience – like working to induce and maintain a dream state. Watching yourself complete corner after corner, each corner a wild hairpin turn, you succeed only by bypassing your conscious mind, reducing your awareness to a relaxed state of instinct, able to respond faster than thought. You fall apart when you think consciously about what it is you're doing.

What's unique to this entry (and to all the pre-PS2 entries, in fairness) is its cyberpunk grime. Unlike the HD games – and their elegant grandeur – Wipeout 3's future is one that feels close to home. The game's landscapes are all looming grey skies, cities battered and lonely: tarmac and concrete, steel speckled with rust. This grit is something that emerges not just from developer intentions, but from the hardware limitations that Psygnosis were grappling with. The textures buckle and warp, unable to settle, like a cheap tent being torn from its moorings by the wind. The low resolution cannot but make things muddy, rough as sandpaper, despite the clean lines that the artists have traced. There is a fantastically productive tension in Wipeout 3, between the purity of its design, and the scrappiness of its aesthetics.

I wrote a 2000 word blog on Wipeout as an attempt to draw a line under the series, move on to something else: I need something new to write about. But if anything, writing that up has only made the itch worse. Waking up the other morning, *literally* the first thing I did was to Google the price of buying the games on PSP. I don’t even have a bloody PSP. I woke up this morning with heart palpatations, Wipeout's soundtrack wired through my brain like an electrical current. I wish I was joking. I really can't see a version of this summer that doesn't involve me driving further and further on into the relics of all these long-lost futures.

I am enjoying Dark Souls 3, but only after having brought down my expectations to a level that is unacceptably low. 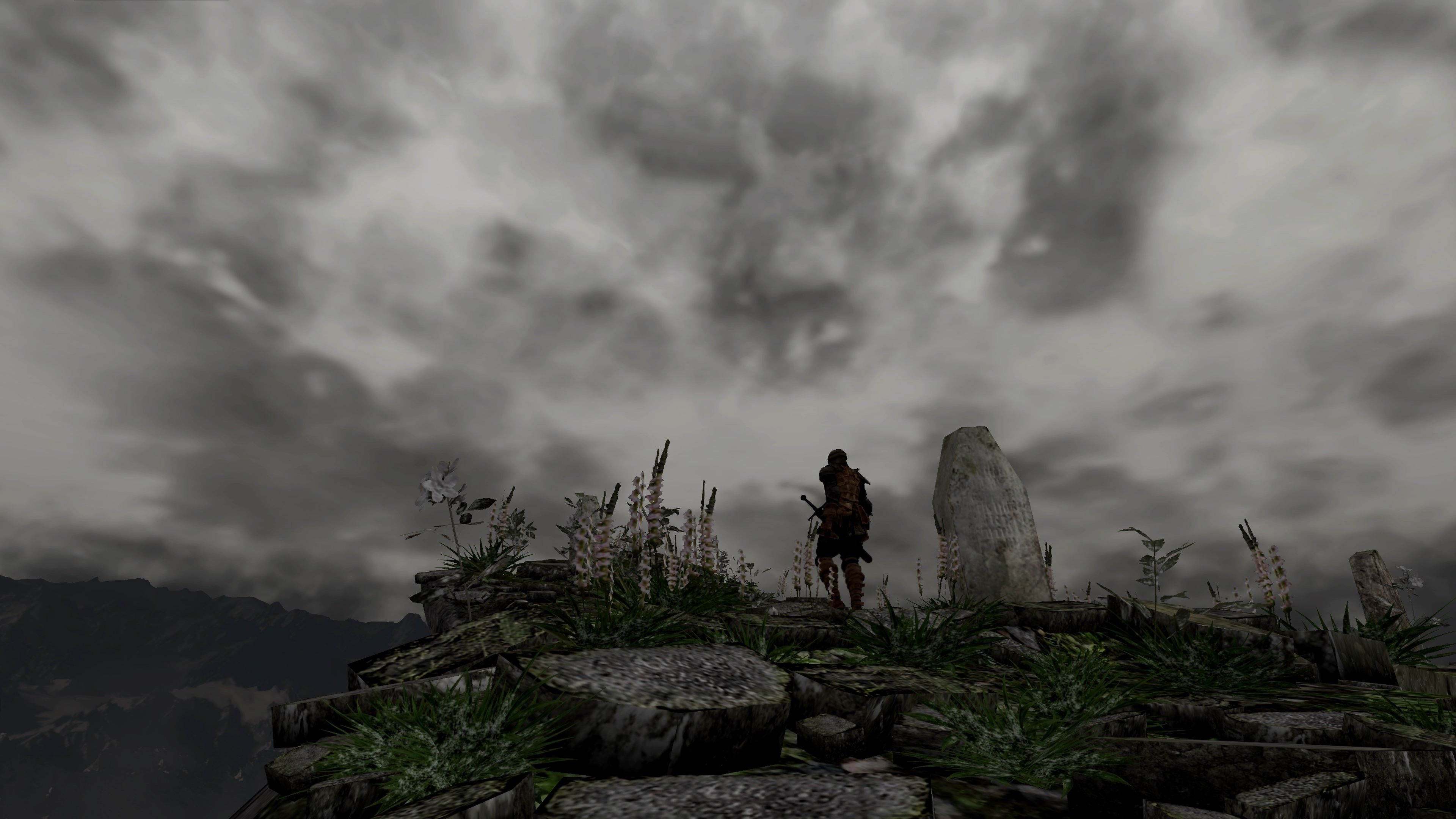 Playing through Dark Souls in 2013, it felt like such a singular experience. The game's collection of systems – all of them opaque, and player-resistant – was such a bizarre, hodge-podge, crow's nest jumble. It defied genre conventions and easy categorization, and yet it all somehow came together to suggest an organic whole. The contrived videogame logic of checkpoints and repeated player deaths was elegantly hidden, woven deep within the strange mythology of its world. Like survival horror contextualising its save points as type-writers, Dark Souls used 'bonfires' and 'an undead curse', and 'the cyclical nature of all human suffering' as fantastic cover-stories for its videogame tricks. The game rarely appeared 'gamey'. All its contrivances were dressed like outgrowths of the metaphysical logics of its world; its eccentricities seemed to emerge spontaneously from being true to its own fiction.

To all appearances, the developers of Dark Souls worked by asking themselves: 'what gameplay would make sense in a world like this?', and then worked backwards from there. The fiction came first; the game followed in its wake. The mechanics seemed like they had been developed, from the bottom up, as means of expressing and expounding on that underlying fiction.

I'm making no claims as to how the development team actually worked: I have no doubt this is an incredibly naive reading. I'm simply expressing how coherent and original Dark Souls felt, and that these qualities suggested this kind of high-minded approach. Once you get to Bloodborne (or perhaps Dark Souls 2), this illusion collapses. You are no longer confronting a world, but a reified genre. The mechanics and tropes of the ‘Soulsborne' sequels are codified and consolidated, are applied arbitrarily on top of their fictions. By the simple fact of their existence as sequels (spiritual or otherwise), the fictions of these worlds blatantly did not precede their form. The game design came first; the fictions were sketched in later.

Bloodborne, a slick-as-fuck bastard of a game, had a style so far up my alley I’m still shocked I don’t love it. Its gorgeous gothic Victoriana was like a fever-dream Edinburgh, a blur of hazy spires and shadowy streets, all shot through with a muffled silence, a dreamy stillness. But by virtue of the game's cookie-cutter, pre-determined shape, I just couldn’t buy in to its fantasy. I didn’t feel like I was inhabiting the city. I was hyper-conscious the whole way through that Bloodborne, first and foremost, was a sequel to Dark Souls, and that the means by which I engaged with Yarnham were determined by this fact. The difficulty spikes, the slow grind of collecting souls ‘blood echoes': drained of their original symbolic power, these game mechanics exist as empty husks. They just sit there, exposed in all their artifice, like vestigial remnants of an earlier stage of evolution. The familiarity of the form inhibits the player's ability to feel truly swept up by an alien world. FromSoftware seem stifled by their obligations to an in-house brand. Clinging to past success is the logic that sunk the Silent Hill series; it was the opposite approach that elevated the recklessly unfaithful Silent Hill: Shattered Memories. Downpour was a slavish recreation of the tropes and stylistic tics that defined Silent Hill at its peak, forgetting that the shock of the new is what gave the games their power. Shattered Memories was an attempt to recapture the initial audacity of Team Silent, their willingness to be bold, knowing that that was the underlying engine of the series. In 1999, Yamaoka made mainstream and shockingly popular the music of the avant-guarde; in 2009, Shattered Memories writer Sam Barlow took the same route, borrowing his narrative structure from the experimental fictions of  J.G. Ballard.

Shattered Memories allowed the form its gameplay took to be dictated by the logic of its story, and ditched all the genre trappings that tied it down to its past. I would love to see FromSoftware pursue such a strategy. I’d love them to find ways of emulating the spirit of Miyazaki's success – the surprise of it, its wild abandon –  rather than rehashing the specific content of it.

In the meantime, we have Dark Souls 3. 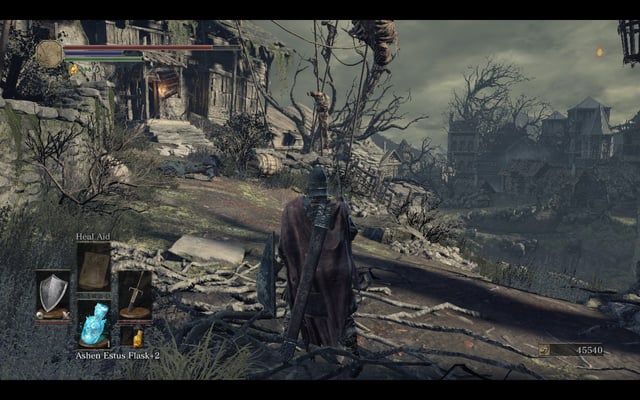 The world design is gorgeous, and staggeringly dense. It is so richly saturated in detail that it is honestly overwhelming. I’m grateful the game doesn’t hurry you along, gives you time to soak it in. And its rhythmic gameplay loops do continue to offer up plenty of their own, circular rewards. These are small pleasures, comparatively, but I’ve resigned myself to enjoying them.

What Dark Souls and its sequels do still share is a paradoxical mix of both elitism and egalitarianism. The games all indulge in a brand of chest-beating, self-aggrandising, pseudo-existentialism, which pushes players  in the direction of a competetive individualism. ‘Git gud', etc. But the games also have secrets so specific, hidden so deep, it is clear they were designed to be unearthed by collectives, not by players all on their own. How much of these games would you have missed had you not had others to help you on your way? Right the way through the series, Dark Souls wants to foreground your mutual dependence on other people.

Ironically I guess, I'm not actually familiar enough with the fan base to know whether this egalitarianism is something that has actually taken root in the community. I hope it has. I'd like to think the games foster a kind of comradeship between players, but I worry that their brand of self-pity-cast-as-heroic-myth is something that would strangle this in its cradle.