the valve to end all ARGs

and if you give a mouse a glass of milk, he'll want an alternate reality game to go with it. in this case the distraction that the community waiting for Portal 2 was given has today erupted into a flood of new content for games in the Potato Pack, in which an early release of Portal 2 has almost been confirmed with an early preload, along with the discovery of plenty of clues that a team of highly diligent Valve fans spend time sifting through and uncoding on what seems to be a round-the-clock basis. we're talking about cross-referencing media files with shit put in other games, here

normally this isn't my kind of thing, but it's hard to miss your Steam library simultaneously updating five games at once with downloads averaging at 200mb per title. after Steam went through lockup fits over the day, we ended up with some souvenirs: 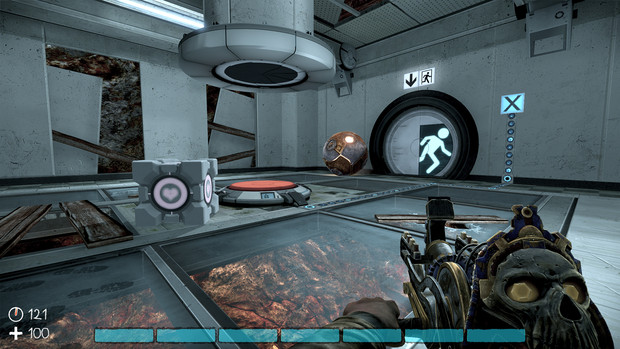 Aperture test rooms in The Ball

... and so on. there was an Aperture map added to Killing Floor, new levels in Super Meat Boy... some of the content existing to play and other stuff simply providing clues as to what it all means. if anything it's fascinating to be a part of and totally consumed my day

maybe i should be grateful for that

other items of note today are the announcement of games from Capcom's Captivate 2011, new info on the Nintendo 3DS lineup for Q2 this year including Zelda: OoT 3D and a game many have been wondering about lately; Starfox 64 3D (slotted for July 14 in japan)

but seriously, where is my new IP content for a new handheld, Nintendo? for all we know, the plan at this point is to follow Ubisoft's philosophy of saying one thing and meaning another

those are stories for tomorrow though? i've already written more than i planned. for now, i sleep

something very special from Vanillaware happening this summer
#Community    #Industryevents
Login to vote this up!

your author's name is aaron vaughn, and right now i'm nobody special. i have half a foot inside the video games industry writing for Gaming-Age.com and a lot to say about it

i made a blog for little insights so that i don't get lazy. it might even help me get a job, if i do things right. i don't want to be the next hero, but i do want to be a regular guy with regular opinions and a realistic bullshit detector. less of a video game critic and more of an analyst, it's my self-appointed job to help prune the industry's marketing and fluff away from its true core

you know, an idealist