The Weapon of Choice - Volume 3

Killing...it is in our genes from birth. Human kind has a blood lust, the same as vampires but in a different manner. In fact I believe that Vampires are a true bi-product of humanity. We see a car accident while driving, we slow down to have a look. A pair of planes misled themselves into a few towers, the whole world is on their feet. It has come to the point now that if World Peace was declared, most people would go insane from boredom and neck themselves. But then again, there would always been different ways to kill in video games.

As in the previous two articles, we will be taking a look at the most inventive and colorful ways, to end a life in a video game. From 1 to 5, this is the criteria for which the arsenal shall be judged:

1) Originality - Has it been done before and can we get it on the black market?
2) Fun Factor - Is it fun to watch the life be taken in the fashion to which it is taken?
3) Gore Gauge - Will we need maxi-pads for the clean up?
4) Difficulty - Is it easy to use?

Of course I have not played every single video game the world has had to offer, so if you can contribute to the topic in any way, please feel free to do so. Today we will start with what people suggested in the previous installments.

The Transolcator Gun - Unreal Tournament Series
As suggested by Abagnale

Way before the Portal Gun was released; this baby was being used for similar purposes. It functions as a weapon, a defensive device and a mode of movement to travel instantaneously from one location to another.

I remember watching Bad Boys when I was younger. That scene with Martin Lawence in the toilets where he gets plastic bagged right before he escapes and slams some dude's head into a urinal full of piss...classic. Around the same time Bad Boys was released, so was this title which was banned from many shelves due to the way you could dispose of people with every day home products such as The Plastic Bag. Here is an example of how to use one that my friend Pete and I put together for your viewing pleasure:

Manhunt's killing sequences would usually be controlled by a bunch of quicktime events that would continuously become more difficult to execute but if pulled off correctly, would result in an ultimate killing sequence which always had realistic visuals and sound effects to match. Not a pretty way to go.

Ok, so Devil May Cry may not be the most realistic combat simulator out there, but you gotta admit, it is killer fun to play. The combat and executions are so well balanced it would be hard to make this game NOT look cool. Much of the design in the Devil May Cry series revolves around the anime feel of sleek, slick and stylish which is not a bad thing. The weaponry in this game is usually always a great experience to toy around with, but no other weapon was more fun, nor more unpractical as this.

After defeating a boss who I would have rather had sex with than kill, she turns into a very awesome weapon for the main character Dante to use. The weapon is... get this, an electric guitar that transforms into a Scythe that cleaves and kills with a finesse and style that really can't be matched. It really is something you have to see for yourself which is why I added the video of Dante rocking out.

The Purple Shell - Mario Kart Series
As Suggested by Celicacrazed

You remember this arsehole of a thing don't you? How could you forget...You are in the lead of an epic race with four of your friends on a huge track like Wario Stadium, you are coming to the final corner and closing straight, victory is so close you can taste it, your friends are not far behind you...but you know you have this in the bag, that is until a purple horned shell comes flying out of nowhere and rapes you to a dead stop while your three mates take first, second and third places.

You would either love or hate this thing, because in situations where you were falling way behind, you would most likely be given this to deal out justice for your shittiness. When fired, it would track down all the players ahead of you and take them out one by one and it would not stop until the player in first place was smashed. It is debated whether this or the lightning bolt are the best weapons in the game. I would vote this because the Lightning Bolt is pure and simply an easy way for the person in last place to catch up, while with the purple shell, he still has to earn his position in the race.

There were two things that made Assassin�s Creed get talked about amongst gamers more than anything else. The Swan Dive from the very tallest building, and Altair's Blade. Because we are dealing with weapons here I figured it would be best to discuss the blade.

Hidden from plain site, this blade is what makes the assassinations seem easy. It is quick and quiet and if executed at the right time can be unseen by any onlookers. Located on the forearm of its user Altair, it is activated by a slight twitch in his fingers which released the blade as his palm hits the enemy, making it look more like a palm to the side of the face, than a blade in the side of the neck. Very shroud.

1) Originality - 3 - Hidden weapons on the forearm have been seen before
2) Fun Factor - 4 - You'll be doing it for a while before boredom sets in
3) Gore Gauge - 3 - A blade to the neck is never pretty
4) Difficulty - 4 - Timing is everything, if you miss, you'll know about it 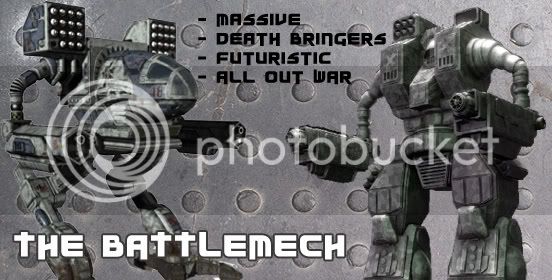 The BattleMech - Mechwarrior Series
As suggested by Puppy Licks

The concept of the battle mech is one of the greatest I have ever heard of. Huge war machines that are piloted by men and women in opposing Clans against one another in a the 31st Century war-torn battle field. The Timberwolf / Madcat and Summoner / Thor (Pictured) being the most recognizable of all the mechs. Made in man's image, the battle mech will always consist of two legs which keep it upright, and two arms with assorted weaponry and the cockpit is usually located at the top or in the center. These things shit Death and eat War. There is no easy way of explaining how a battle mech works, so I will let this video do the talking for me:


Listen to the voice over in this...he means business.

The Shotgun - Various Titles
As suggested by Suitcoatavenger and Seigfreid

Next to the common pistol or handgun, the shotgun is the most commonly used weapon in gaming. Most FPS will have a shotgun readily available from the beginning of the game, which will always come in handy for when you are running low on everything else. Able to blow a hole through almost any enemy within a few shots, it is the ideal weapon for clearing a path from where you are to the destination you want to get to.

Using cartridges instead of bullets, the Shotgun cartridge is full of tiny lead ball bearings which are forced out by the primer sparking up the packed gun powder at the steel end of the cartridge. Depending on the barrel length will usually determine the spread of the ball bearings. If the barrel is short the spread is wider, so it is more ideal for close range face destroying, where as a longer barrel would be best suited for a greater distance shot. One thing a player can always depend on is his shotgun and that�s because it never lets him down.

This game is addictive, and the engineer is a cult favorite amongst many gamers for a reason. It is not just about running in with your guns blazing and hoping for the best. It is all about strategy. Where to place the turret, which direction to face it, where would it be less venerable to enemies, is it set up close to metal so I can repair and build it up quickly.

My turret kill streak record, without it being destroyed was 14 kills. That means that the opposing team could not get past my turret without dying at least 14 times. That comes in handy when trying to defend your capture points. It is great fun and satisfying if you know how to do it right and use your head. And no, I do not support setting up turrets where the glitches are in the maps.

That's it from me for now so go and kill something in a creative fashion.
#Community
Login to vote this up!