Video version of this review:

Like most gamers my age (32), I experienced the colossal carnage and destructive exploits of George and Lizzie on the Nintendo Entertainment System (NES).  While the game already existed as an arcade game, I had never heard of Rampage until one fateful sleepover at a friend's house.  That night, my friend's mom took us to the local video rental store to pick out a game or a movie.  My friend convinced me to agree on Rampage as the chosen rental even though I had never heard of it before. 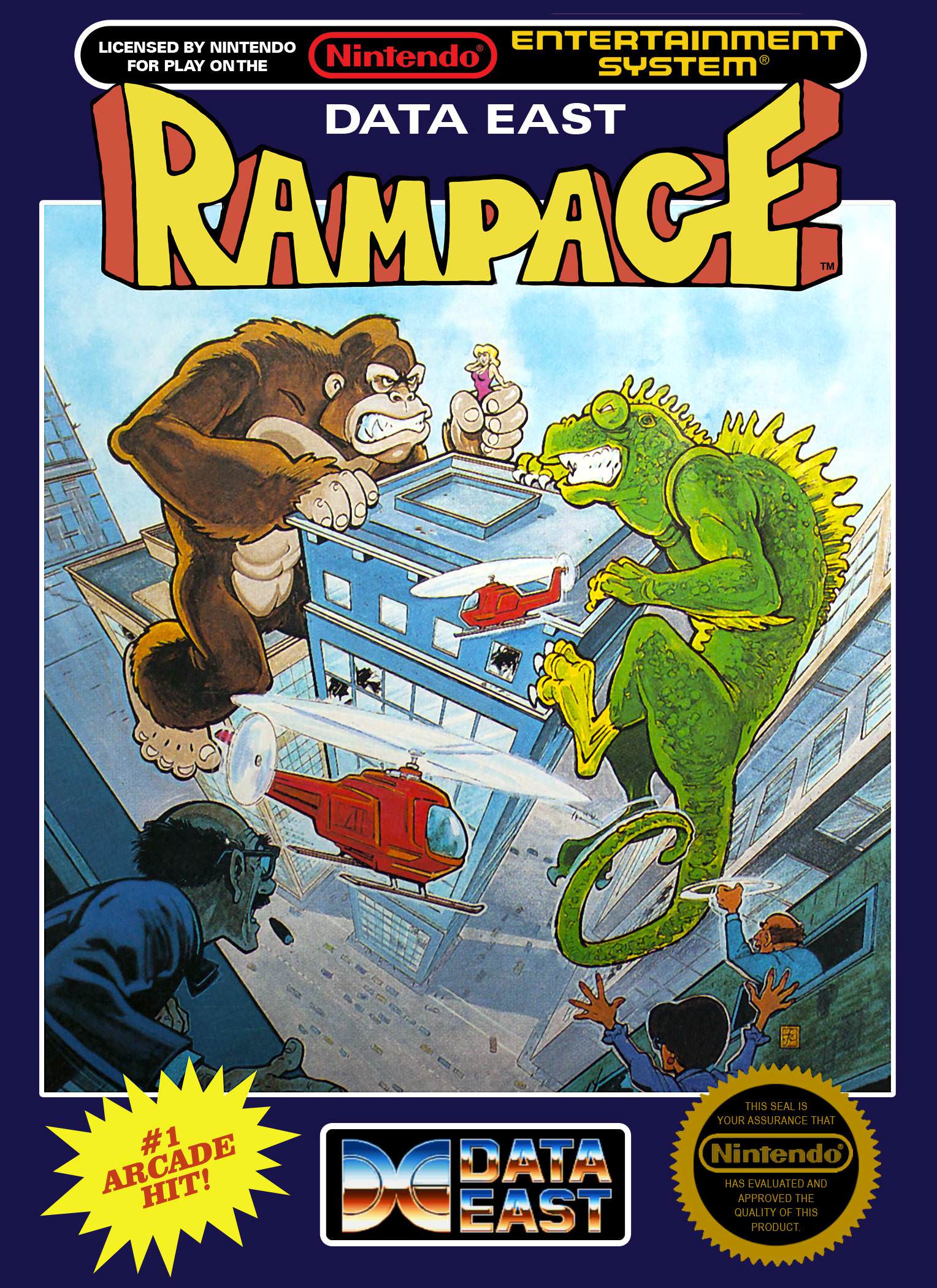 An hour later, we were sitting in his basement eating Pizza Hut pizza, drinking soda, and playing Rampage stomping through the city of San Jose as a mutated primate and lizard.  The game instantly clicked with my young boy brain, and eventually, I would find a way to snag it for my game boy color a couple years later as well as Rampage: World Tour for the Nintendo 64.

New Line Cinema has now opted to bring us the 1980's classic arcade hit as a feature film adaptation.  If that sounds as absurd as a Battleship adaptation, well, that's because the notion certainly is.  Both games, one a table-top game, the other a video game, are devoid of any kind of narrative.  Ergo, the film is only going to be as good as the story injected into it.  In this age of modern cinema, it's hard imagining a movie with a 1960's-esque sci-fi setting involving humans, through alien or science experimentation, transforming into gargantuan monsters who level cities and eat humans as a viable option for a theatrical release.

Whether it was difficult to imagine or not, it's what happened.  However, the setting was somewhat modernized providing an over-the-top, but scientifically safe explanation for why our three antagonists mutate into larger creatures.  Unlike the video game, George, Lizzie, and Ralph were never human.  They were always animals, but were unfortunate enough to be the recipients of a genetic altering concoction supplied by an overtly evil corporation, Energyne.  With the plot of subverting the destruction of a major city by enormous, destructive monsters supported by a sub-plot where the hackneyed trope of an evil corporate ship steered by a brother-sister duo out to fill their bank accounts, it's entirely appropriate to say that this film is 100% predictable at just about every single level.  The one-liners and snidely whiplash level of evil-doer schemes are the epitome of cringe-worthy 'cheesiness' at times.  But even that was a predictable aspect of the film going into it. 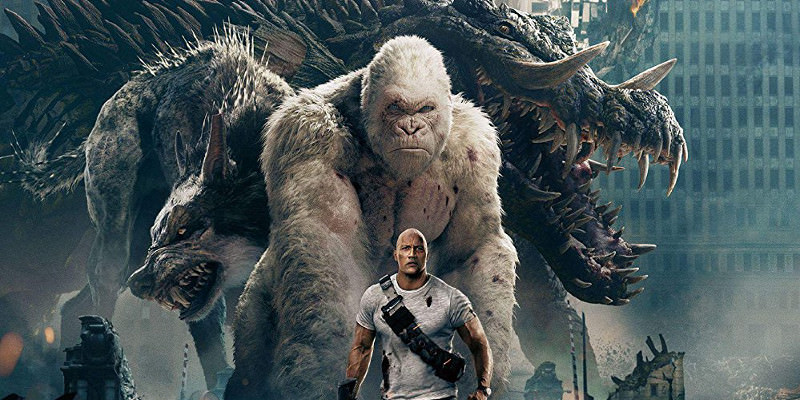 The film is centered around Davis Okoye (Dwayne Johnson), a primatologist, who spends his days at a San Diego wildlife preserve with his primate pal, George, an albino and one-of-kind gorilla.  The movie goes to great lengths to ensure the audience understands that there is a strong bond between Davis and George actually offering a short, yet emotional backstory regarding their first meeting years ago.  Despite this aspect, there isn't much else in the way of exposition, and the film doesn't waste much time getting into the thick of it.   Before long, George is infected with the life-altering pathogen as well as a random wild wolf and alligator.  Davis's involvement is a result of his friendship with George as he sets out to protect him and also attempt to understand what is happening to him.

As I mentioned previously, this film is a one-note flick with very little depth that is as predictable as my chances of winning the lottery tomorrow.  But I'd venture to say that any one walking into the theater to see this film after being fed the marketing and promotional material likely isn't expecting a smartly written script, academy-nominated acting, or complex narrative.  Instead, the expectation is that this film is a fun, simplistic adventure that removes any need for active thought by the audience, and is to provide all the energy and thrill that a cataclysmic monster bash session featuring Dwayne "The Rock" Johnson can promise.  In principle, it's comparable to waiting in line for Splash Mountain.  Most everyone in line knows exactly what to expect, but still anticipate the thrill and know they don't have to work for it.  They just want to be taken for a ride. 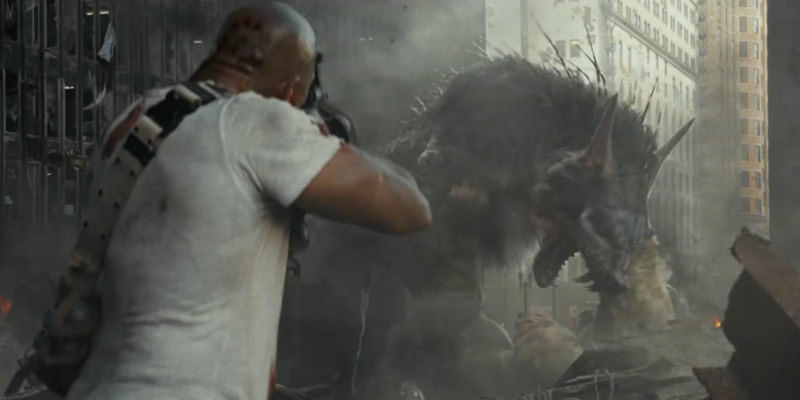 Cinema is one of my most favorite forms of entertainment, and, like anything in life, it's important to manage expectations in order to get the most enjoyment out of a movie-going experience.  Many people likely learned this lesson a few months back with the release of Star Wars: The Last Jedi.  I am not about to wade knee-deep into that debate.  But it's easy to see that no matter what side you're on, the level of expectations, no matter how high or low, had everything to do with your opinion of the film.  Entering this film with the expectation that you are looking for a dumb, mindless, but fun ride might enable you to maximize your enjoyment of the flick.  I took my young son to see this film, and while there were a few violent moments that he likely shouldn't have seen (no need to parent-shame me for taking my four-year old to PG-13 films, I'm self-aware), he still had a blast.  The plot was simple enough even for his understanding and he was a big fan of George by the end of the film.  We had a great time, and enjoyed the ride.

With that basis, the film is entertaining, and I can recommend it wholeheartedly if you're in the market for that type of experience.  Additionally, if you were a fan of the games as a child (or an adult), the notion of George, Ralph, and Lizzie stomping around in modern cinema might be enough for you to enjoy at least one viewing.