14 years later - I finally got into Metal Gear Solid

6:30 PM on 09.22.2012 (server time)    0
A few weeks ago Sony finally launched PSone compatibility to the Vita much to everyone's delight, despite the somewhat botched job of it all it still meant I was able to finally give Metal Gear Solid a go, a series that I have barely touched throughout my gaming history. Hell the most contact I had with the series was the MGS4 demo which left me running away confused by it all, from then on I'd continue to see it here and there in the gaming news and it always intrigued me. With the somewhat recent PSN summer sale I decided to finally give the series a go especially since I wouldn't have to play it blown up all ugly on my TV.

I'll be honest in that I somewhat expected myself to never finish it, I've started many classic games in the past to see what all the fuss is about only to stop playing half-way through but this time was different, I was loving the game despite my doubts and reservations and was able to see it to completion. However I wondered how I enjoyed it so much, don't get me wrong I'm happy that I was able to get into it but stealth games have rarely delivered any enjoyment for me and I have very short tolerance and attention span for cutscenes, how is it this 14 year old game was able to worm its way into my heart? The answer has a lot to do with this generation. 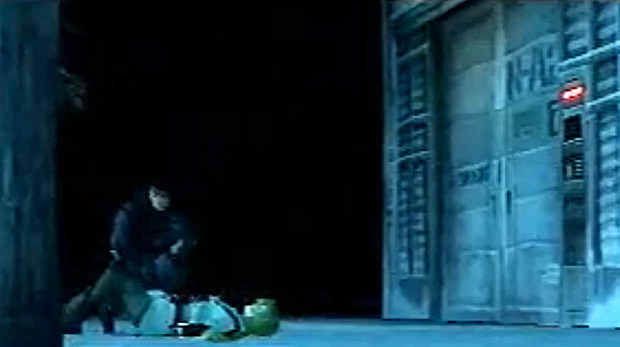 In the end the point I'm trying to get across is that this isn't a game that takes luxury in violence and murder in both its gameplay and storyline, something which we rarely see today and for me personally made it all the more compelling. Despite Snake's slowly tarnished image throughout the game we never come to dislike him since we see a change in him that is able to bloom before his death. Meryl isn't just the "get the girl" character, she of all people manages to get past Snake's armour, to get past his defences and walls and see the real man behind the legend.

She's one of the few characters in the game who although is trained in combat she will hesitate before she pulls the trigger, she will shake with terror and glimpse of disgust at the very action of murder which leads to her not loving the idolized legendary idea of Snake but instead loving the man behind the legend. He connects to her on a deeper level than we see with anyone else in the entire game, he's blunt and honest yet confused by what he feels however by the end of the game he's bloomed enough to even tell Meryl his true name and finally diverts off the path of killing, because it's no longer the only thing he knows, he no longer needs to live for himself, now he has someone to live for.

Metal Gear Solid is a game that took me 14 years to finally play I loved every moment of it, it not only brought up interesting topics and characters but also never took its self too seriously with plenty of intentional and unintentional humour to help lighten the mood. I can only hope that I love it even more as I go onto play the various sequels.

Hopefully I didn't come across too preachy or pretentious here but I'll never forget my time with this game and to me it's truly impressive and remarkable that even today a game from the PSone era can still live an effective mark. You could even say "IT TOOK A WHILE BROTHER" I'll leave now...
#ShareonCommunityBlogs
Login to vote this up!