It's Time to Jam: My Top 5 Space Jam/Videogame Music Remixes 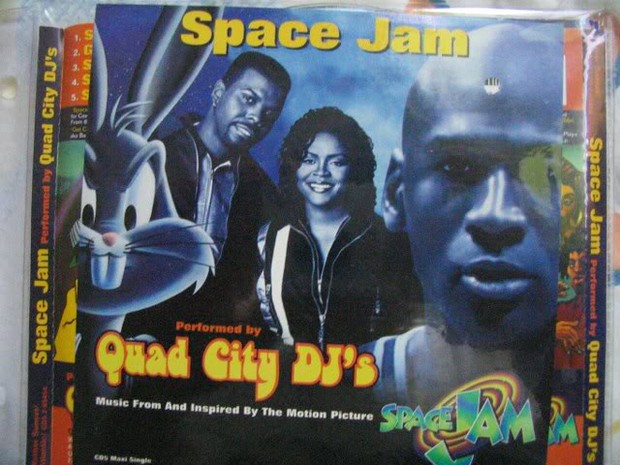 Foolish videogame writers the world over have been using the term ‘the Citizen Kane of videogames’ for what feels like decades now. This is madness, because clearly our beloved medium should be moving towards what I believe to be the greatest film of all time: Space Jam. But since I am alone on this hilarious cartoon basketball-themed island of Space Jam appreciation, it appears I must be the educator for once. How will I convince you all that gaming needs to move closer and closer to a Bugs Bunny/Michael Jordan vehicle?

By listing the best Space Jam theme/videogame music mashups and rating the puns in their names and attached photoshops, of course! I mean, that is literally all I know how to do.

Chrono Trigger’s delightful soundtrack is an indisputable classic. The game’s composer, Yasunori Mitsuda, took great advantage of the SNES’ sound card. After playing Chrono Trigger for the first time, I couldn’t get the battle music out of my head. I doubt any of you could either. Of course, picking one favorite song from that soundtrack is literally impossible: Gato’s Song, Frog’s Theme, and the game’s main title theme are other great tunes. But since Battle 1 is the most remixable, we’ll be looking at that first.

It’s the opening bit that really earned this song a place on this list. The all-too-familiar bass line mixed with Space Jam’s opening beats works surprisingly well, even if the relatively low-key nature of Battle 1 and the rest of Space Jam occasionally clash. When I look for a great Space Jam mashup, cool drum & bass doesn’t always lead to the best combination. Still, this is a quality song in any form, and a worth number five.

This image is a little disappointing, except for Chrono. The face matches up perfectly, and the basketball is a very nice touch. Not too bad overall.

Mixing the recurring words in Space Jam (Slam, Jam, Space, various basketball terms) with the name of the original song is key to putting together a great Space Jam mashup name. In fairness, it’s difficult to make a pun out of Chrono Trigger, so I can appreciate what they did here.

#4 Must Keep on Slammin’ Ahead

Not counting Green Hill Zone and maybe Sonic Boom, the City Escape theme is probably the most well known Sonic tune. Is this due to nostalgia goggles, or is this song just too catchy to resist? Since I never owned a Dreamcast or bothered purchasing the GameCube updates, and I love me some City Escape, I’m willing to bet there’s probably some merit here.

Guess what? A Space Jam/City Escape mashup turned out great. Even though this is the Classic Generations version of City Escape, blending Quad City DJs with any Sonic the Hedgehog tune works almost too well. The result is a song that is emblematic of what adults think the 90s were like. Objectively, there’s not as much mashup skill on display here. Sure, the song is really good. But like I said, Space Jam and Sonic? It’s just too perfect. Almost calculated, really. The person behind this must have some background in marketing, because a person with an intimate knowledge of demographic overlap is clearly behind this.

Or someone who just likes Sonic the Hedgehog.

A blue Barkley? Not too creative, but it’s a fun visual, especially on Classic Sonic’s body.

Using a lyric from the original song as opposed to the original song title is a brave move (even if it doesn’t entirely work) but then again, it would be hard to make a pun out of City Escape. City E-slam-cape? Live and Jam?

Whether you’re among Persona’s many fans or detractors, you have to admit one thing: Persona has some damn fine music. And since we all know the Space Jam theme is better than all of Beethoven’s works combined, a combination of the two has got to be fantastic.

I put this song on this list over the other Persona 3 mashup (Mass Destdunktion) for two reasons. One, the original song is amazing. Two, Space Jam synchronizes with the beat of Battle for Everyone’s Souls very well, resulting in a generally excellent mashup that still works in the original context. Imagine a super long Persona boss battle with this music playing. Now you can’t stop imagining it! Go play Persona 3 FES and put this on in the background!

Again, the correct use of the basketball is necessary. Giving Thanatos some basketballs to hold and putting Charles Barkley’s cranium in his (its?) mouth is just brilliant.

Like I said earlier, good Space Jam remix names involve words from the song or general B-Ball terms. But fantastic Space Jam remix names should also make sense as a real sentence you could say in conversations if you were a madman. This one does come kind of close, but not close enough. I do love the fact that ‘Souls’ and ‘Slams’ begin with the same letter, though.

I listen to the Bastion soundtrack daily. There’s no doubt in my mind that it’s one of the best videogame soundtracks of the generation, if not all time. Not even the indie scene has managed to produce a blend of genres that mesh as well as Darren Korb’s magnum opus. Were you overcome with emotions during Setting Sail, Coming Home? No? Go and find a heart surgeon, buddy. It looks like yours is missing. Possibly stolen.

The upbeat tempo of Spike in a Rail seems almost tailor-made for Space Jam, as if Korb had the film’s soundtrack playing on repeat when he composed this piece. Yeah, I probably put this on the list because of my deep, almost romantic love for the Bastion soundtrack. But that’s because it’s amazing, this mashup equally so. Maybe the volume levels should have been adjusted just a little more, but whatever.

Face replacement cannot be escaped when you are looking at a Space Jam Remix Photoshop™. This one is not only clean, but also kind of brilliant in its simplicity. Barkley’s cranium hasn’t just been slapped on The Kid’s head. Instead, their respective faces have overlapped in kind of an unsettling way. Was Barkley’s face always there? The world may never know.

That’s some good word replacement there. But now I have this visual of a team of basketball players dribbling to push in rail spikes.

You know, that could be a good modern day John Henry movie.

#1 Reach Out to the Hoop

Persona 4’s music really matched the game’s various emotions. Between sitcom-esque hijinks, attempted child murder, and lazy school days, every tone on display was represented well. But since I talked about the generals of Persona music earlier, I won’t dwell on it too much here.

So let’s just get started oh my god that opening. That is perfect. We should probably just stop making Space Jam remixes, because there will never be a more perfect mix of that famous opening verse and the original song de jour’s opening bars. Hell, everything about this mashup works, thanks to the creator’s excellent use of both vanilla Reach Out to the Truth and the instrumental version. There’s very little lyric overlap. Instead, the original chorus is used quite a lot. You don’t hear much of the verses (that’s where the overlap comes in), but that incredibly catchy song RPG lovers grew to adore is totally here. Except now it’s better, as is always the case when you add Space Jam to anything. My only criticism is that it cuts out before a real ending, but it’s a battle theme in game with a lot of grinding. That’s kind of understandable.

The only reason this ‘shop didn’t get a perfect score is Barkley/Souji Seta/Charlie Tunoku. Barkley’s face is just slightly off, which is a disappointing oversight in an otherwise flawless piece. Adding the Spaulding logo to Souji’s bowl cut and the modest use of basketballs? Sheer genius.

It rhymes. That…do I need anything else? It. Rhymes.

And that’s my list! Hope you enjoyed it! I spent frankly too much time putting this all together. Do you guys have any favorite Space Jam remixes, videogame related or otherwise? Then write your own list, because I’m certainly not going to write it for you.

Oh wait, the comments. Yeah, that works too!
#ShareonCommunityBlogs
Login to vote this up!

It takes a lot to make a stew.