The key to designing an effectively tense survival horror experience

NOTE: This article was originally published on Gamasutra on 09/24/2015.

One of the greatest fiction authors of all time, H.P. Lovecraft, once said that “the oldest and strongest emotion of mankind is fear, and the oldest and strongest kind of fear is fear of the unknown.” This tried-and-true adage has served as the bedrock of memorable horror works like The Shining and The Ring for several decades, and people are still finding ways to create that unsettling feeling effectively and innovatively. It worked extremely well with movies and books. What about games?

Video games have untapped potential for effective horror experiences, and there have been many examples of games that have fulfilled, if not exceeded, that potential. Games like Alone in the Dark, Silent Hill, and Fatal Frame have taken Lovecraft’s template and repurposed it to unnerve the player in their own unique way, be it through the gameplay mechanics or the audiovisual presentation. It’s one of the greatest and most potent ways of immersing the active participant into the virtual experience. 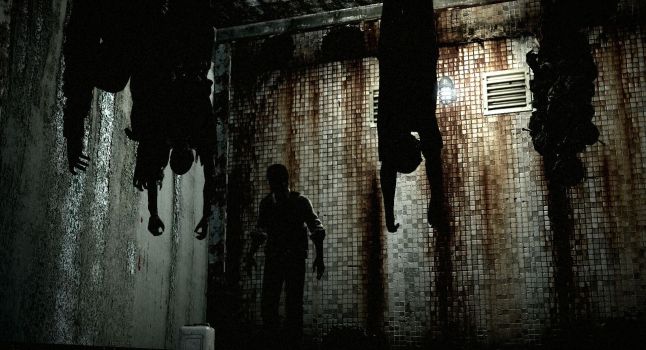 Video games are special when it comes to depicting horror because the participant himself/herself is the one who has to bear the tension and eeriness that permeates the overall experience, and he/she is the one who has to face his/her fears and keep them in check. As a result, the game designer can take serious advantage of that immersive trait to craft a game that plays with the player’s paranoia.

But evoking feelings of terror and panic in a fictional work is no easy task, and doing so in video games is no different. The game designer has to be extremely careful about how he/she wants to craft the game’s spooky ambiance and design the game mechanics around the ultimate goal of making the player feel uneasy and tense.

I shall prove my point by listing the five important tenets that all engrossing survival horror games should respect. For each tenet, I’m going to give you an example of a game that nails that design element.

1) Put an emphasis on atmospheric tension

One of the first things a survival horror game has to do to make a very good and foreboding first impression is to draw the player into its virtual world by setting the atmosphere and tone of the game world. This can be accomplished by injecting the environment with a potent dose of ambient tension, which can be achieved through eerie audiovisual effects that can exploit the player’s psychological fears and emotional instability. Games that take advantage of that presentational technique generally leave a huge impression on the player and his/her psyche.

Call of Cthulhu: Dark Corners of the Earth is one such game. This psychological horror title relies heavily on its creepy atmosphere to unsettle the player by designing its game world and gameplay mechanics around the idea of the main character’s insanity. From the visions that the player experiences if he/she is exposed to extremely disturbing environmental aspects to the panic-inducing moments that force the player to act hastily, Call of Cthulhu does an incredible job of making the player feel uncomfortable without becoming schlocky. 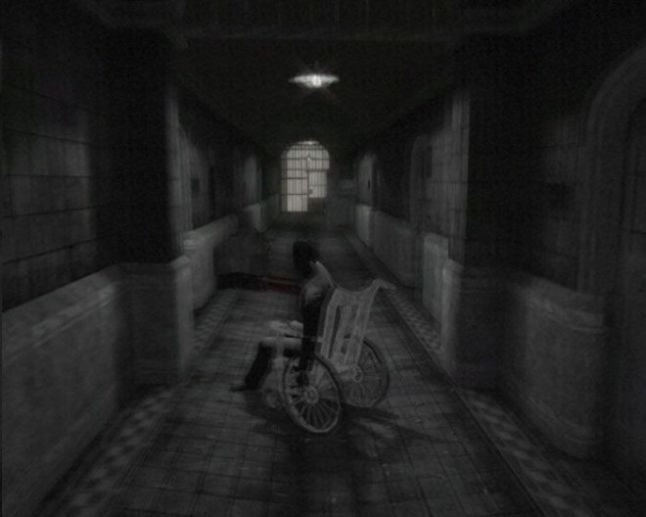 Atmospheric tension is a useful immersive technique because it gradually gets under the player’s skin throughout the whole experience and enhances the game’s engrossing qualities. Since this approach is progressive and accumulative in nature, the game designer has to craft the ambiance in an intricate manner to incorporate such an element, one that emphasizes mental conflict.

2) Try not to make the player (too) powerful

Another thing that the game designer has to keep in mind when designing a survival horror game is that he/she should avoid making the player powerful enough to overcome his/her fears through sheer brute force. While giving the player tools for means of survival isn’t a bad design choice in and of itself, making said tools extremely powerful will not only make the player potentially reliant on them, but it will also shatter the sense of vulnerability that’s essential in making the experience palpably frightful. The tools that the player is given should have limitations of their own, which will compel the player to approach parlous situations in a more methodical and careful manner.

One game that manages to strike that fine but satisfying balance is the RPG/shooter hybrid System Shock 2. Although the player is given plenty of tools that range from guns to psionic powers, he/she is also faced with the worrying issue of limited resources, which can really prove problematic if the player doesn’t manage them properly while fighting the Many and exploring the Von Braun. This means that the player should not only be worried about the monstrosities that populate his/her surroundings, he/she also has to contend with his limited capacity of repelling his/her fears and opponents. And that’s not mentioning the already spooky atmosphere that haunts the player throughout the whole game. 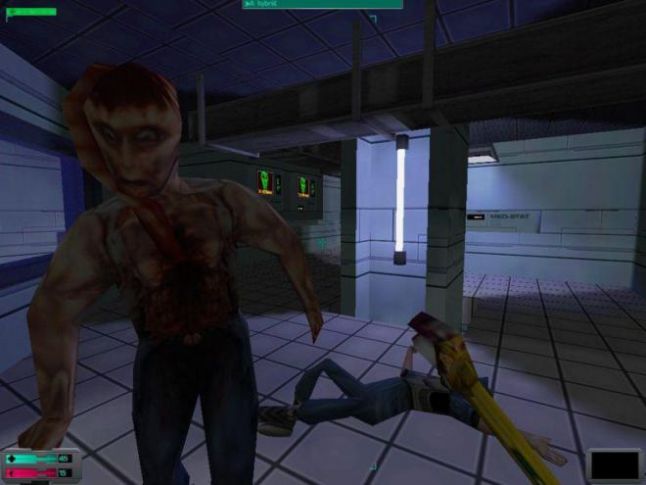 A good survival horror game isn’t necessarily one that completely omits weapons or similar tools from the gameplay equation. It is one that encourages the player to manage his/her resources and adopt a careful approach that will enable him/her to make steady progress without sacrificing the oppressive ambiance. Accomplishing that feat can make for some truly memorable and pulse-pounding gameplay.

3) Make the experience an isolating one

There are several ways the game designer can make the game world atmospherically unnerving and disconcerting, and a tried-and-true way of doing so is by designing the environment in a way that cuts off any possible form of outside help and traps the player in whatever unwelcoming setting the game takes place in. This feeling of isolated terror is what evokes the fear of the unknown, and it compels the player to face the anomalous obstacles that stand in his/her way. Putting that much pressure on the player is enough to make him/her sweat excessively and anxiously, making for extremely discomforting moments.

Thief: Deadly Shadows knows that very well. While not a survival horror game in the traditional sense, Deadly Shadows still retains the kind of chilling atmosphere that would make any gamer cower with fear, something that is taken to the next level in what might be one of gaming’s scariest levels: The Shalebridge Cradle. This possessed orphanage/mental asylum not only isolates the player by blocking all means of escape, but it also pits the player against reanimated “Puppets” and ghostly apparitions that roam the conscious building. When you factor in the perfectly spooky audiovisual presentation, the game ultimately becomes less about theft and more about personal survival in the face of an omnipresent threat that emphasizes the feeling of isolation. 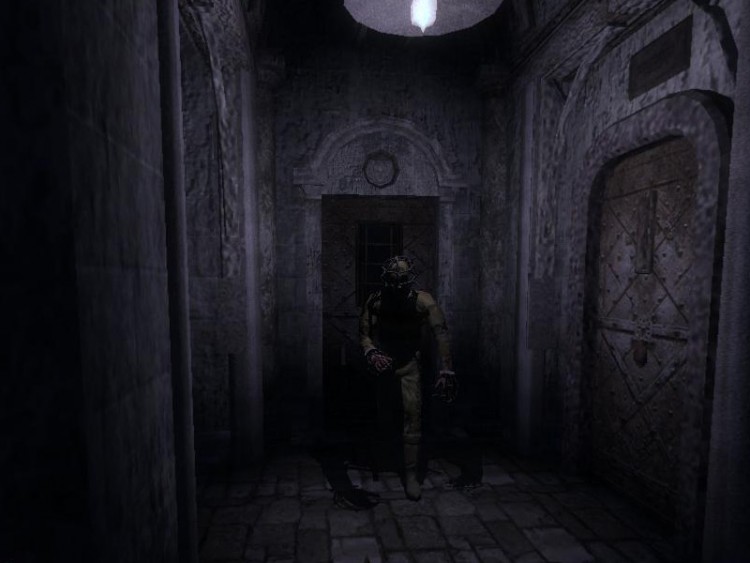 When it comes to properly portraying horror, the sadness of being alone goes hand in hand with the terror of being trapped (or worse, stalked). That’s a combination that can prove especially useful to the game designer and enable him/her to get a better sense of the kind of atmosphere he/she wants to craft. When properly and/or innovatively tweaked, the isolation template can lead to an extremely tangible virtual environment that constantly haunts the player.

4) Keep jump scares to a minimum

A survival horror game’s goal is to unsettle the player and make him/her feel vulnerable as he/she is traversing the game environment, wondering what lurks in the shadows. This fear of the unknown is something that atmospheric tension can provide and sustain over the course of the entire experience. This is why jump scares, quite possibly the most overused scaring method in horror history, need to be used sparingly, if at all. Not only is it a terrible idea to rely solely on them, but jump scares lose their edge when used constantly. This can potentially result in the immersion being broken since the player will know what to expect when it comes to being scared.

Condemned: Criminal Origins thankfully (and mercifully) avoids making that mistake. While the game does contain its fair share of bloody and disturbing imagery, Condemned seldom uses jump scares to unsettle the player. Instead it relies on the unpredictability of its deranged enemies as well as the eeriness of its dilapidated environments to make the player feel unsafe. When the jump scares are initiated, they successfully take the player by surprise because of their sporadic and chameleonic nature. One jump scare in particular, which I’m not going to spoil, was so unexpected that I literally had to pause the game to catch my breath. The fact that the preceding jump scare occurred several hours ago made that particular one all the more memorable. 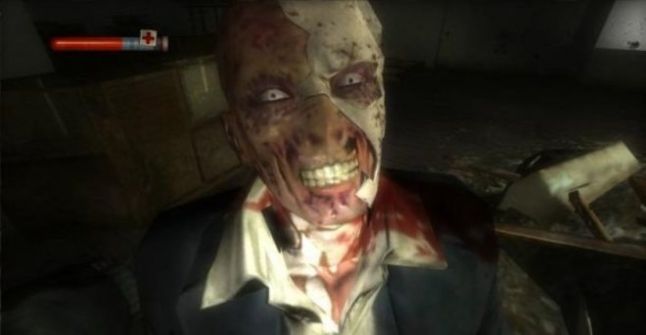 Jump scares are like coarse language: when used sparingly and smartly, their impact is maximized and they can shock the player effectively. When overused, they get old and start to become routine (a huge no-no in survival horror games), which undermines Lovecraft’s tried-and-true adage. Because of this, jump scares should be seen as something of a delicacy by the game designer, not something that he/she can abuse while developing the game.

Since the game designer has to ensure that the tension the player feels remains constant throughout the whole adventure, he/she also has to make sure that the pacing of the game remains as buttery-smooth as possible. While the game certainly needs to offer some level of cerebral challenge to keep the player thinking about his options and prevent the experience from being a one-note affair, it also cannot afford to impede the player’s progress with obtuse gameplay sections that do nothing but turn the whole thing into a frustrating chore that destroys the immersive qualities of the game.

Penumbra: Black Plague is a good example of a survival horror title that contains complex obstacles without unnecessarily slowing down the pacing of the game. The virtual lack of item management and combat means that the player can focus all of his/her attention on solving the many physics-based puzzles that are strewn about the underground research facility of the Archaic Elevated Caste. The fact that these puzzles aren’t esoteric in nature means that the player will be less likely to spend his time figuring out the logic of the puzzles. Rather than being annoying and convoluted, Penumbra’s puzzles are actually intuitive and fun to solve. 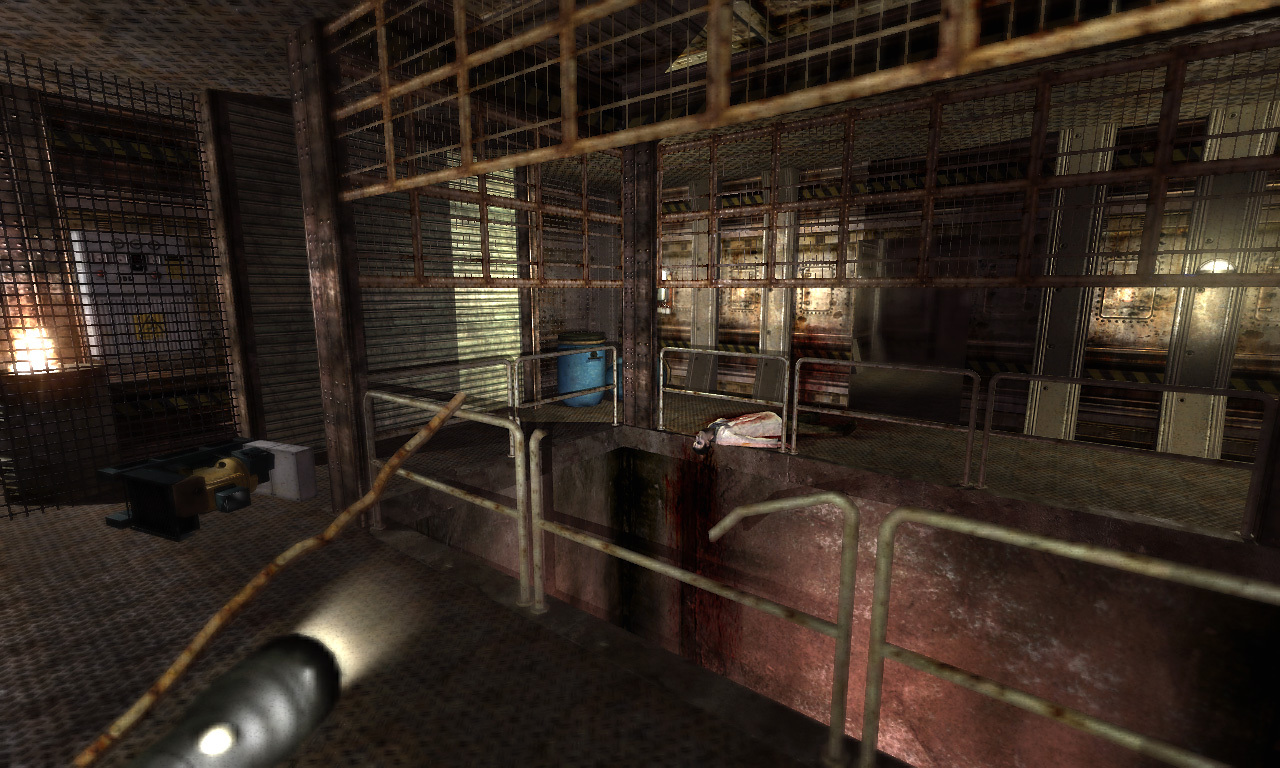 The importance of keeping the gameplay flow constant and uninterrupted is especially important in survival horror games since the pacing correlates with the spooky audiovisual presentation, and poor pacing can definitely ruin the experience. Thus the game designer has to work extremely hard to keep the tension intact and maintain the player’s attention and sense of immersion when designing the gameplay.

Crafting a game that immerses the player into its world is no easy task, and survival horror games are particularly tricky to produce. Since there are so many ways one can craft a horror experience and get it right/wrong, the game designer has to be careful not to undermine the components that I just listed, and instead use them to his/her advantage during the development process. Doing so will ensure that the game he/she is crafting will be palpably spooky and get under the player’s skin. That’s the power of a truly tense survival horror game.