So last week, a fellow Dtoider commented on one of my JRPG quotes articles about the possibility of crafting a character sheet that contained a description and several concept artworks for said character in order for me to further hone my creative chops and turn one of my narrative ideas into a reality of sorts.

I found the idea to be incredibly intriguing and I ultimately decided to use one of my design documents for my project. The final result can be seen below: 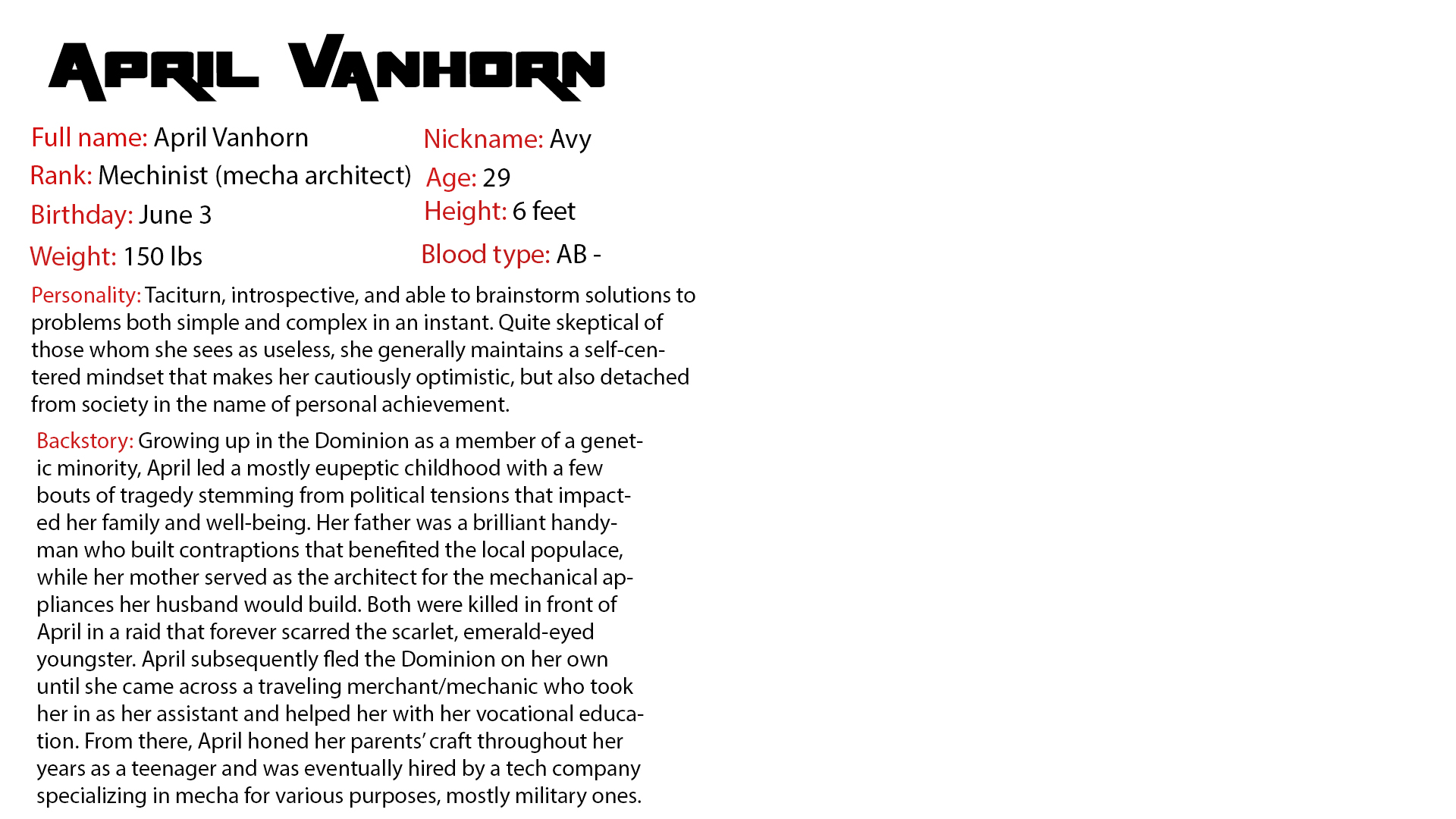 As you can see, half of the sheet has been purposely left blank since I have yet to get my hands on illustrations that best depict the character from a visual standpoint.

I was wondering if any of you would be kind and willing enough to lend your artistic talent to my side project. If you want to get a good idea of the kind of individual I wish to portray, you can review the (rather lengthy) description that I've written below:

6 - Defects: ID tattoo on her neck that she hides with a neckcloth, scars on her back.

2 - Occupation: Mecha architect; works for the Coalition army as a private contractor who supplies mobile armored suits to all branches of the military (navy, air force, marines); loves to have a highly organized schedule and abhors changes in her routine; is also a talented businesswoman capable of selling her mechanical dream to her corporate superiors, much to the dismay of her skeptical detractors.

3 - Education: Attended a public elementary school while living on Dominion territory before transitioning to private middle and high school, and college when she crossed the border. Grades ranged from B+ to A+ depending on the subject she learned; favorite subjects were mathematics, history and philosophy; unique aptitudes include quick problem-solving to the point where she reached logical conclusions at a breakneck pace.

4 - Home life: Lives inside her cozy industrial workshop littered with mech parts, memorabilia and blueprints, located in one of the military barracks stationed near the Dominion-Coalition border on the latter’s side; her parents were killed right in front of her by a Dominion hunting squad right when she was 10 years old.

5 - Religion, race, nationality: Agnostic; neo-human (has enchanted blood running through her veins); originally hails from the Dominion as a genetic minority citizen.

6 - Place in community: Even though she is revered by her superiors as a talented designer, she is unduly reclusive and spends most of her time locked in her workshop and working on prototypes for her mecha inventions. Is shunned by her extroverted peers for being out of touch with reality and spending more time seeking personal glory than contributing to the sense of camaraderie that defines the Coalition army.

8 - Amusements, hobbies: Exercises intensively in her workshop when bored; likes to read philosophical, political and historical books; enjoys spending some time on her own in the outdoors to clear her mind; loves to collect metallic pieces from scrapyards to use on her makeshift prototypes and figurines. Does all of this because she thinks that it will turn her into a more efficient worker.

1 - Sex life, moral standards: Asexual; believes that human value is solely derived from productive work and not from unnecessary slacking. Thinks that people ought to be independent and driven by ambition and personal success, and that being cocky and/or overly dependent on friends is a sign of mental weakness and unwillingness to act freely and righteously.

2 - Personal premise, ambition: Had to flee the Dominion and seek shelter on Coalition soil when her parents were killed by Imperial soldiers. Wishes to turn her invention into multipurpose machines capable of serving humanity more conveniently and efficiently.

3 - Frustrations, chief disappointments: Doesn’t like it when people question her lifestyle and refusal to converse with others; laments the fact that some of her superiors see her as an “overly idealistic” and “uncooperative” individual; disappointed that she doesn’t always get the recognition she truly deserves for her work and efforts.

4 - Temperament: Generally phlegmatic, but can become choleric when provoked and incredibly distressed when things don’t go according to plan.

5 - Attitude toward life: Insubordinate; wishes to challenge the societal and economic status quo (which she perceives as collectivistic and restrictive).

6 - Complexes: Is obsessed with her work and abhors being interrupted by anyone while immersed in her studies and projects; has an irrational fear of failure and of becoming “a mere cog in the machine” for the rest of her life; hates wasting her time with social initiatives for fear that it would put a damper on her productivity.

8 - Abilities: Is capable of repairing and coming up with new mecha ideas briskly, and can multitask very easily, even when under high pressure.

9 - Qualities: Takes an enormous interest in the liberal arts when seeking inspiration for her mech designs; harbors a great knowledge of her craft and enjoys sharing it with others when asked about her line of work; is an outstanding presenter who can sell dream projects to almost everyone and make good on her promises.

I understand it's a lot to take in, and I sincerely apologize for sharing with you information that may appear obtuse to you. It's just that I wanted to flesh out my character as much as possible so I could make her three-dimensional (hence the physical, psychological and sociological categories).

Please let me know if you would like to lend a helping hand with my project, and feel free to share with me your feedback on the WIP.