Towards the tail end of the 20th century into the early years of the 21st we lived in a gaming era where the Unreal Tournament model was influential in first person shooters. Shooters released around this time generally featured heavy emphasis on multiplayer while single player was scaled back to a series of fights against computer-controlled bots without any story. One of the earlier pioneers of the model that Unreal Tournament would eventually popularize was Quake III Arena, now the latest port to come to Xbox Live Arcade as Quake Arena Arcade. Eleven years hasn�t done much for Quake III Arena nor its archaic design philosophy, and hindsight gives us the perspective of why we can�t abandon single player.

The most glaring problem with Quake Arena Arcade is the aforementioned the lack of any story, narrative, or discourse. There isn�t even a setting so much as a generic cyberpunk backdrop. Battles are in brown, gritty futuristic scenarios and the only exposition we get is one-sentence blurbs that outline the NPC opponent you face in single player. Ranger has explored the Slipgates and survived unspeakable evils, Phobos is a veteran soldier who died facing demons on one of Mars� moons, and on and on. 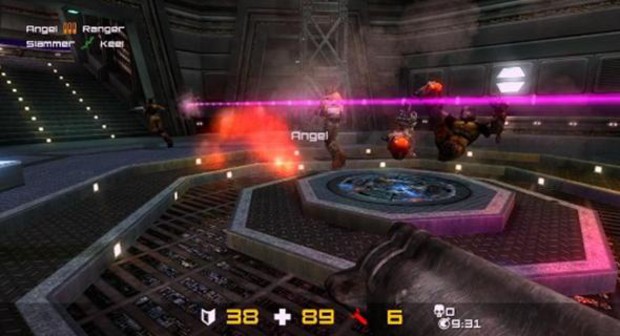 Single player being as insubstantial as it is the only noteworthy part of Quake Arena Arcade is signing online and I can�t really vouch for the multiplayer either. The game has to compete with dozens or more games with multiplayer � everything from Gears of War 2 to Monday Night Combat looks and plays better. There�s a small crowd of players but finding a game can take several minutes, and controls are no less slippery online than they are off. At its best the multiplayer is functional and never lags or slows down but compared to more comprehensive multiplayer modes the standard menu of Deathmatch, Team Deathmatch, and Capture the Flag is starting to seem very pass�.

Quake Arena Arcade is one of the most prominent examples of a fourth generation game translating badly into our glitzy modern times. A multiplayer-focused game from 1999 simply can�t compete with the bountiful offerings on Xbox Live, especially as a straight port. I appreciate that Quake III Arena helped pioneer first person shooter multiplayer but it�s a thin framework relative to multiplayer as we know it today. If you�re a serious nostalgia buff you may see this as worth 1,200 Microsoft points, but you�re not missing much if you never got into the original game.
#Community    #reviews
Login to vote this up!