3:08 AM on 01.04.2013 (server time)    0
Ahhhh, holidays. They are a time for catching up with the family, spending time with my wife, going outside and enjoying the beautiful Summer weather (it's Summer here in New Zealand, you crazy northern hemisphere weirdos), but more importantly they are a time to catch up on some gaming!

Unfortunately I am now back at work as of a couple of days ago, but before this I had three weeks off. Yes, three straight weeks of no-work bliss. You bet your delicious ass I spent a lot of this time playing games. I spread my love around pretty wide, but there were a few games in particular that I focused on. HERE THEY ARE!

My love for the Far Cry series is full of ups and downs. I played the hell out of the original Far Cry on the PC back when it first came out. The sense of freedom that it gave you was something that I simply hadn't experienced up to that point in an FPS. I still vividly remember the first time that I jumped on a hang glider and sniped an enemy in the head off in the distance while I was flying through the air. The game got insanely frustrating and difficult in the later stages, but despite this it still stands as one of my favourite first person shooters.

I was pretty excited about Far Cry 2 before it came out. I ended up buying it on Steam not long after it was released. I didn't really enjoy it, to my disappointment. I just checked Steam now and it says I put 14 hours into it, so I suppose I got my moneys worth even though I didn't get anywhere near finishing the game. My main problems were the infernal respawning checkpoint enemies, the annoying malaria game mechanic, and the African setting. Don't get me wrong, Africa is great, but after the lush, colourful jungle of the original I just found the brown (brown) brown jungle of the sequel to be a bit drab. I have tried to go back to the game now and then but I just can't get into it. 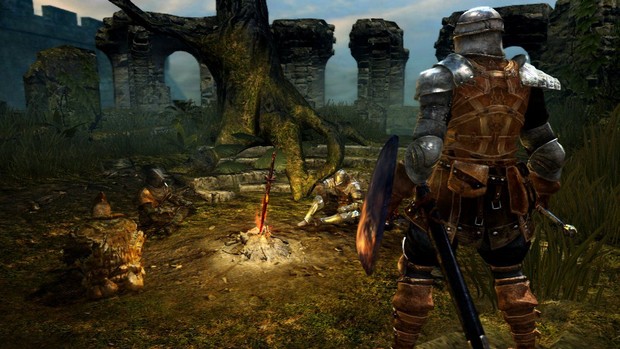 I decided to buy the game on a whim when I saw it for very cheap, $15NZ (around $11US). I couldn't really pass it up. After playing it, I wish I hadn't waited so long to buy it! I really, really like this game. Sure, there are times when I feel like I may as well be punching myself in the face repeatedly rather than playing the game, but after turning it off and taking a break to cool down I always go back to it and tend to progress past whatever sticking point I was experiencing.

Something I'm really enjoying about the game is the sense of exploring the unknown. Every time I enter a new area I raise my shield and slowly creep forward and start to feel out my surroundings. Often I'm killed immediately, but the game really is quite generous with its bonfires (which act as checkpoints) so you never have to travel too far to get back to where you were. Of course, you could easily die on the way to recover your corpse if you drop your guard for even a second. The game is punishing, frustrating, infuriating, but I fucking love it! It's already climbing up my list of favourite games of the last few years.

It is now the weekend after a blessedly short week back at work, so I'm looking forward to playing a bunch more of these games over the next couple of days.
Login to vote this up!