1:34 AM on 01.17.2011 (server time)    0
So, I really don't care for most of the "blogging" thing, but this seems to be a topic that most people ignore: We have a steam group, and we have a chat there.
There seems to be this idea that steamtoid is "hard to get into" and "rough on newbies" and "hate all living things with a fiery passion". That's just not true. Most of it, anyways. Since we had a nice �intro to dtoid IRC� on the frontpage, I decided to whip this up so that you can chat AND play games at the same time.
Getting on is easy. First, Install Steam from here. It's free, and it lets you buy games online. 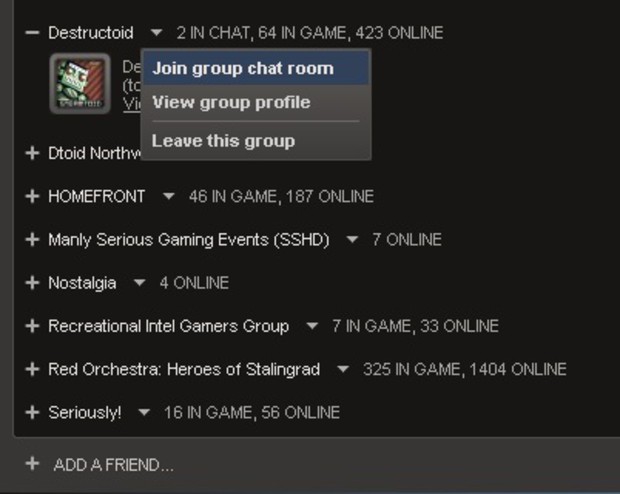 There's a few things that most people don't seem to understand, which leads to the problems with steamtoid being "hard to get into", so I'm just gonna lay out some guidelines.
1. WE DON'T CARE HOW LONG YOU'VE BEEN ON THE SITE
Seriously, if I had a dollar for every person who dropped in, told us we should respect them because they're "old school", and bailed when the vitriolic hate started up, I'd be a rich man. We just don't give a shit, and trying to get respect or anything else from us for your "hardcoreness" is just gonna get you kicked or banned. Which lead to the second point.
2. YOU WILL GET KICKED
Because it's funny. Don't question it, just go with it. We kick people because they're irritating us, we kick people because they're begging for games, we kick people because it's part of a joke, we kick people because we pressed the wrong button. Quit bitching, it's just a part of life. Oh, and also...
3. DON'T BEG FOR GAMES
We give out games sometimes, because we either have codes, or just because we feel like it. Sometimes we'll do nice little mini-contests, sometimes we'll give out a birthday game, or a holiday game, or a whatever-the-fuck-we-feel-like game, but that doesn't mean that YOU get one automatically, or that we'll buy you the sale game because you're short of money. Just because we can afford it doesn't mean we're gonna give you something for nothing.
4. FRIDAY NIGHT FIGHTS
We try to do them. 5pm EST, we try to get a game or two going, of pretty much anything. There's usually someone on TF2, and if we get a group together, L4D. Join in, we probably won't shoot you in the back too much.
5. YOU WILL GET KICKED
Seriously, you'll get kicked at will. We don't have any adult supervision. Well, we do, but I'm one of the adults, and I'm just as likely to kick you for the lulz as anyone. Most importantly however
6. YOUR MOTHER
Seriously, she was a whore, and you�re gonna be hearing about it
#Community    #PC
Login to vote this up!