They call me spooky: The spoopy places of Fallout 3 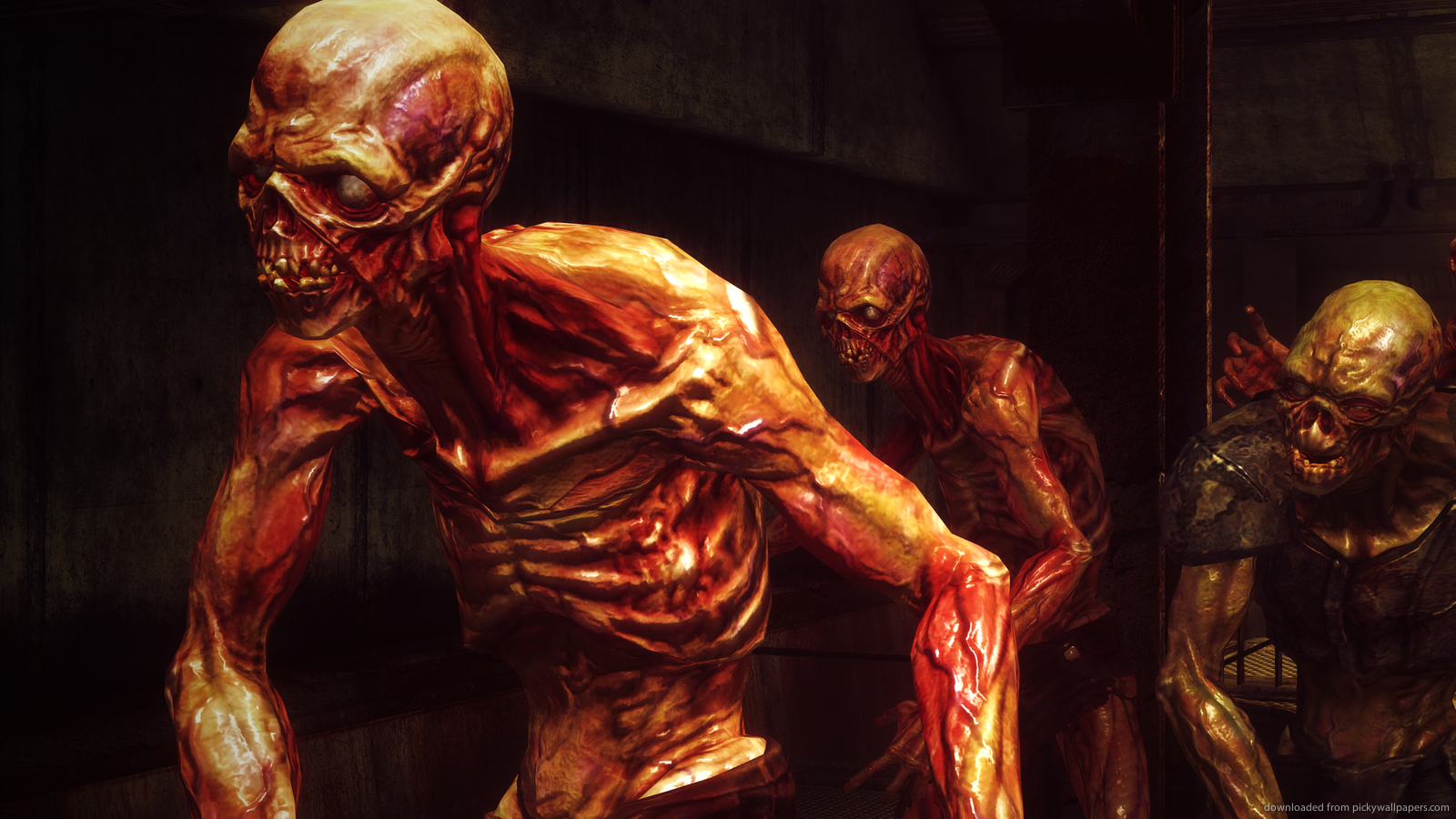 Fallout 3, believe it or not, was my first Fallout game. Or maybe it's not so hard to believe since Fallout 3 was a big, modern reintroduction to the series with its new VATS system. I've been led to believe that Fallout 3 was actually uncharacteristically dark and serious for Fallout but New Vegas gave back some lightheartedness in its setting and the Wacky Wasteland perk. In my first experience with Fallout, things were still awfully tongue in cheek with things like giant, radioactive scorpions, 50s retro-futuristic robots, and the ability to splatter enemies into a red mist with just one random hit when the Bloody Mess perk works. The air of goofiness certainly made some of the darker and creepier stuff stand out more. While Fallout is capable of plenty of gore to earn that M rating, some of the random scares interspersed sparingly throughout the game really got my goose something fierce. Sometimes enough to leave me questioning whether or not I was still playing a game where I just punched a bear into a pile of blood or shot a floating robot into a pile of scrap. 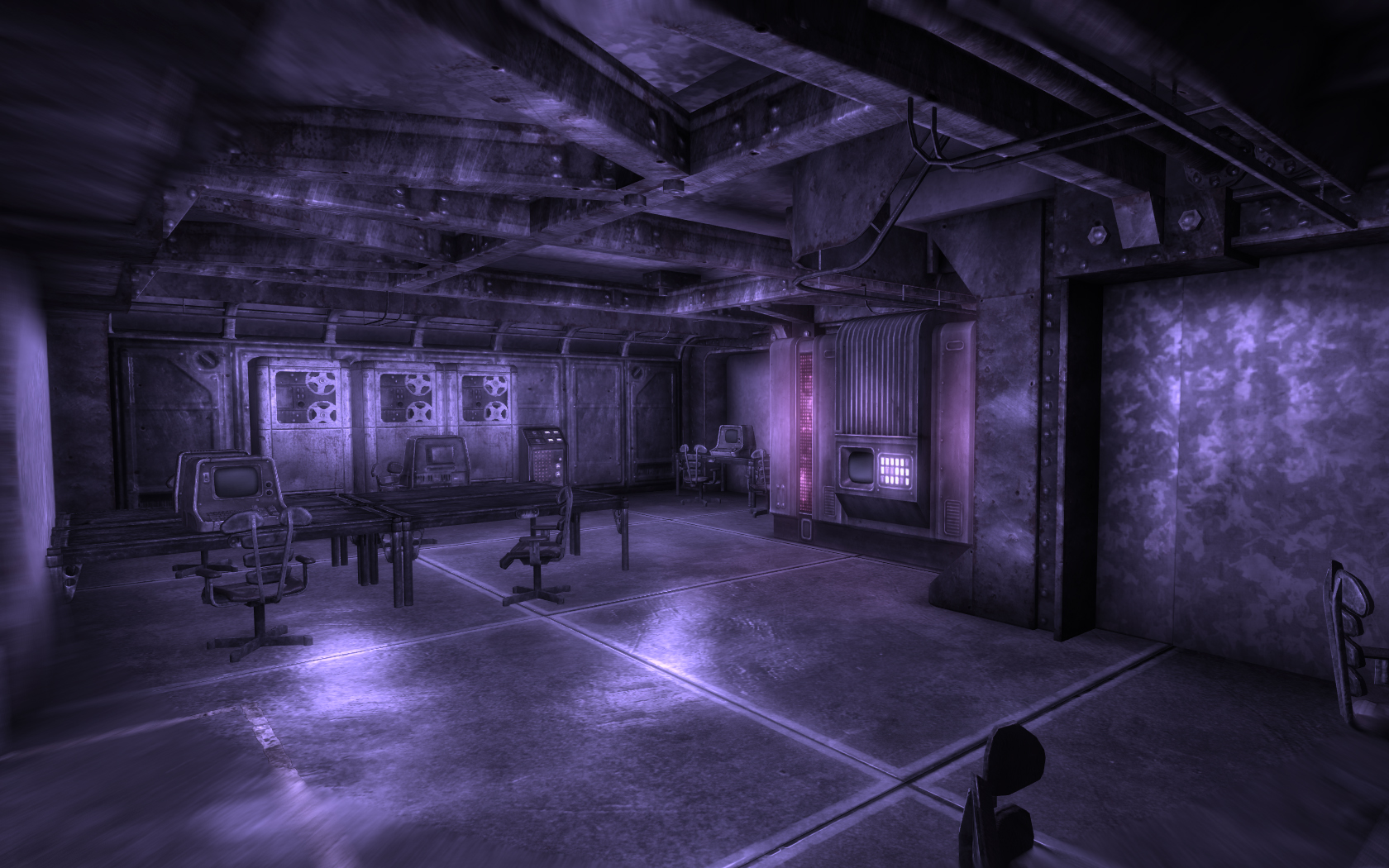 Vault 106
Probably the first big example of a big jump scare shock surprising me in the middle of my big, badass wasteland was this dangerous little hole that randomly makes the whole screen go blue. At first its random and seemingly harmless. Then things get more dangerous when enemies just seemingly pop out of no where, then people just come out of no where. It all comes to a head where, in addition to fighting one lone scientist, whom at this point you can't be sure is real, you also fight the Tunnel Snakes, jackets and all.

Vault 106 was a test bed for psychoactive drugs, as if Vault-Tec was bought off by big pharma to see if their new airborne drugs would have any bad side effects. Well it did, and insanity is a pretty big side effect you can't just say the surgeon general warned you about. Every vault has a certain element of creepiness that guarantees it on the list, but combine the jump scares that has you questioning your perception and just strolling alone in the vault seeing past characters you know you shouldn't possibly be seeing just makes the area all the more creepier. 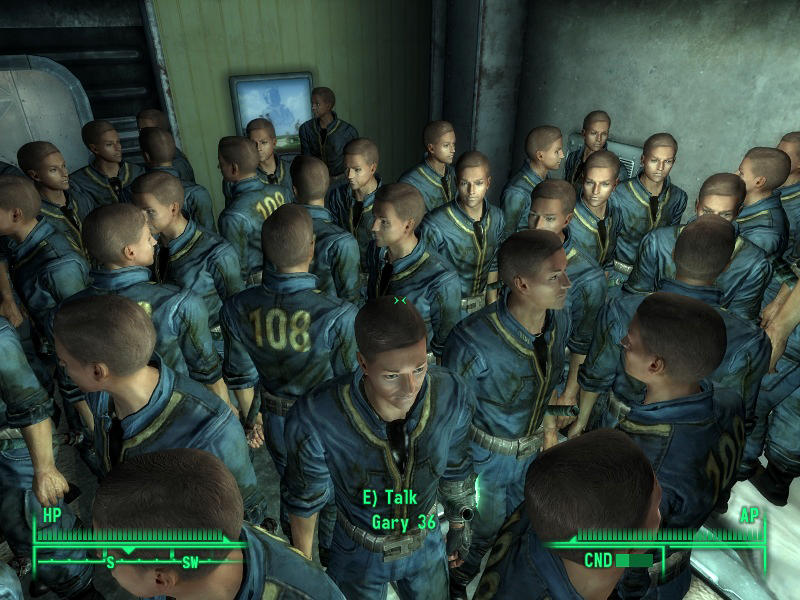 Vault 108
While the sudden nature of Vault 106's perception bending events will send a chill down your spine, Vault 108 has seemingly one hook that keeps on chugging and makes you dread seeing more of something expected all the more.

The first major enemy is a hostile vault dweller named Gary. Ok, sure, weird but who wouldn't be hostile if the entrance was filled with flesh gnashing mole rats. But then you meet more dwellers like Gary 54, Gary 16, Gary 32, Gary 47, all of them crazy and willing to throw themselves at you no matter how well you're armed. Probably the creepiest part is that the Garys is that they lack a self-preservation instinct, yet they'll attempt to coax you out like it's hide and seek, only they'll slowly utter, "Gary", instead.

Radio signals Yankee Bravo and Oscar Zulu
For the most part, I listened to 3-Dog or some old timey music to pass the time while wandering the Capitol City Wasteland. But every now and then you'll come across a new radio signal to hear some situational context for something nearby. There are two radio towers transmitting some dark stuff though.

Yankee Bravo is a tragic story of a man desperately radioing for help for his son. The signal leads you to a drainage entrance with only two skeletons. For only bones to remain, the broadcast must have been left on futilly to just leave only witnesses to the aftermath.

Oscar Zulu is remarkably more creepy. When you pass by this signal, labored, gurgling breathing will suddenly blare out of your speakers. It's pretty unnerving to hear all of the sudden, even though the ending is predictable enough, with several ghouls just gathered around a ham radio. Still, hearing a zombie-like sound come all of the sudden out of no where is sure to unnerve you. 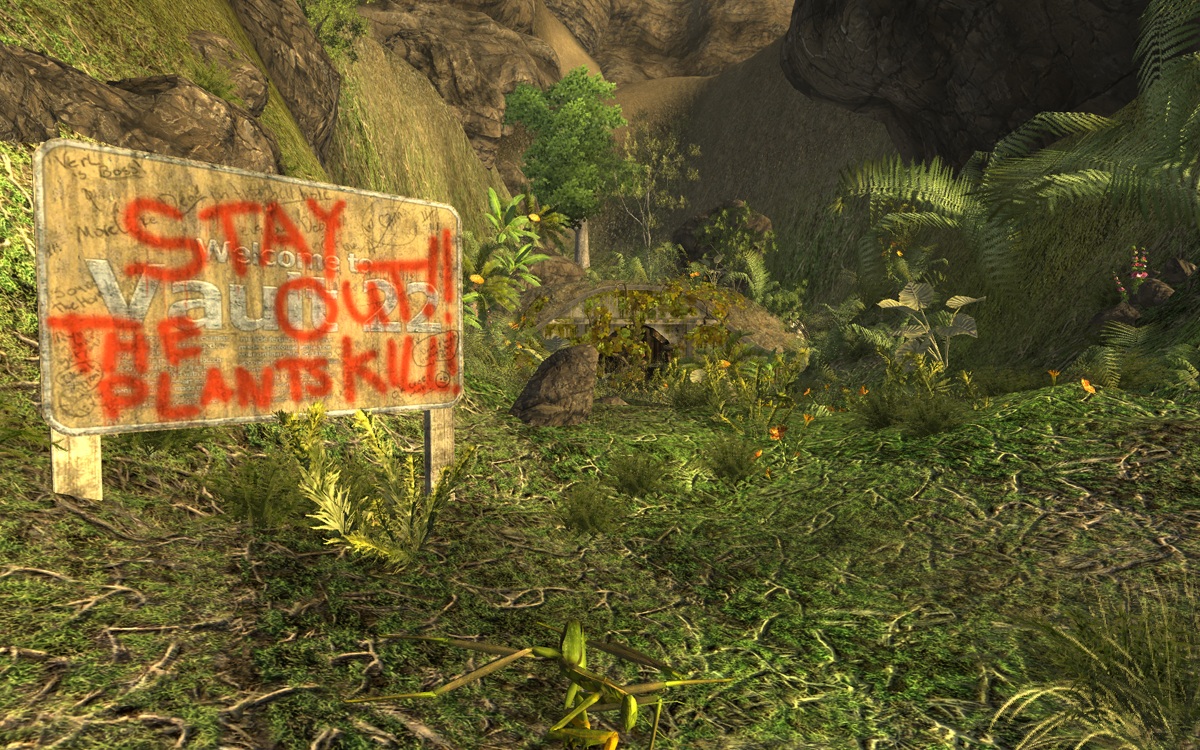 Vault 22
My one entry from Fallout New Vegas is one heck of a doozy when it come to enemy surprises. You're initially led to believe you'd be entering any normal Vault. Like any perfectly good jump scare scenario, this one is all about a sudden monster appearance surprising you out of no where.

The spore carriers are every bit a zombie compared to ghouls using the more traditional zombie appearance. Technically a corpse, the invading spores continue to animate the body for the sole purpose of spreading more spores around to continue its legacy. Spore carriers hide in the thick foilage dotting the vault due to the overgrowth from a failed botanical experiment. The bushes these damn things hide in are like literal monster closets, lying in wait until you pass by for them to pop out and scare the shit out of you.

Deathclaw Santuary
This place is all atmosphere with no need for cheap scares. This place is simply home to numerous Deathclaws, plain and simple. One Deathclaw is already a big problem. But several gathered in one spot is terror incarnate.

The constant fear of coming face to face with a deadly Deathclaw in the tight and twisty corridors of this cave puts you on edge from the second you enter for whatever reason to the moment you leave. This place is based entirely on the fact that the space is claustrophobic and that you already know what Deathclaws are capable of. 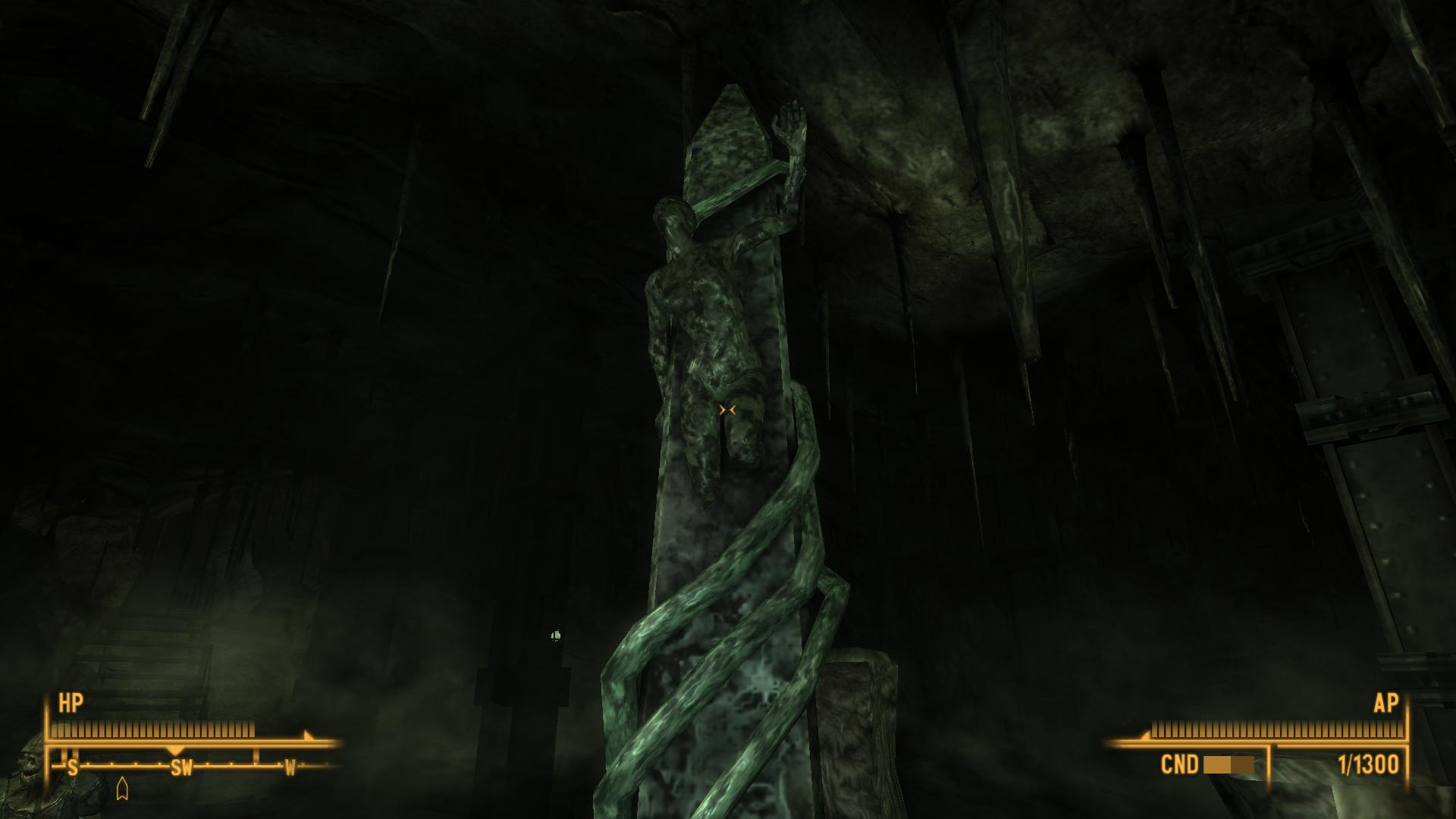 By far the best example of creepiness in Fallout is the Dunwich Building, a non-descript building that's described by the locals as having some bad juju.

The building starts out innocent enough. But suddenly all manner of paranormal activity begins to occur. From doors that will open and close on their own, random paranormal scene flashbacks, and an unnatural amount of ghouls.

It turns out the source of all the spooky events surrounding the Dunwich Building is some downright, Evil Dead/Dead Space demon marker sitting pretty in the basement, driving the inhabitants of the building crazy and attracting all sorts of bad mojo to it. The only normal NPC that is not a ghoul is a mad wastelander who has become mad with evil power, mad enough to reward good karma upon death.

The very presence of the obelisk has spooky murmurs in the background of the music. So you should definitely visit the Dunwich Building this Halloween for a spoopy good time!