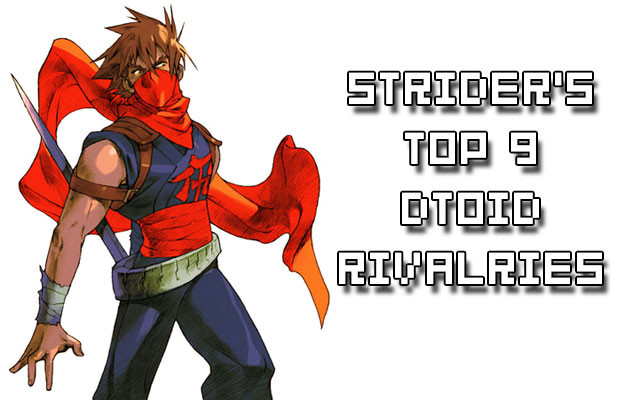 Well, its time to compose my top 9 Dtoiders. And I have to stick with it because I have integrity. And without integrity, what could I be trusted with? But not to worry though because I have a clear cut list of choices. What better way to interpret the top 9 Dtoiders who influenced you then through good old fashioned rivalries. Rivalries fuel our sports, our economy, our shounen mangas, and of course our interpersonal relationships. It's the same here too. I've since jumped into other forays of Destructoid's communities: the FP and the forums. But my home has always been the cblogs, for better or worse. What started as a starry-eyed dream is now a much more grounded and thankful spot among such great writers and community members such as the people I'm about to list. Because it's thanks to these people and their own work that for the most, I decide to measure myself against and up my game.

I'll start with one of the most recent of additions, Luna Sy. A mysterious community member who's vaguely located out of East Asia who has the same stance I had when I first started here: take my privacy seriously and my real life out of my Internet life. But that doesn't stop either of us from participating well in the community and making eager contributions.

While it seems Destructoid is her first major community she's joined, she's made every effort to be apart of big things like Rebirthening, Seacrest Santa, Cblog Recaps, and of course her own cblogs. And that's where rivalry comes in of course!

I would've never guessed her English isn't good. Maybe that's because its typed out rather than spoken. But because of that, her blogs are always lousy with great pictures, visual content, and such pristine formatting. Her cblogs are literally the most visually appealing cblogs around and I'm not talking about the pictures.

Next up is a more legacy oriented pick, Beyamor. Do I know a lot of Beyamor's actual activity and contributions? No actually. But Beyamor was the one responsible for picking me out for Wednesday recaps duty. If I didn't become a Cblog Recapper, I don't know where I'd be with Destructoid. Who knows? Maybe I'd be slinging scathing op-eds like Kudo. Or worst, plugging Youtube vids like Johnny Burns!

Beyamor, thank you for being my gateway to the Destructoid community proper. Without your faith, I'd have become what I hate most: a creative leech.

Zombie Orwell is dedication in an account. I've only seen him break character once and it was for a deserved moment of intervention for a personal issue.

Zombie Orwell to me represents the core ideal of Destructoid's personality and humor. Always funny but just barely related to the topic at hand with an off-kilter sense of humor that's just acceptable enough for genuine laughs but random enough that it's very locals only kind of feel.

In case you haven't realized, Zombie Orwell as a character is literally, possibly George Orwell but as a zombie. Always parading himself as Destructzord's foremost undead Orwelling writer, with a writing style all his own: barely comprehensible but still just so that it's worth the laughs.

If you want real rivalry talk, bbain is where it's at. bbain is always such a top notch writer, with a style that always feels like wrapping yourself up in a warm blanket on a cold day. In a jungle of foul, vile jokes and potty humor, bbain's never debased himself with even a hint of a curse word. He's always finding such great topics to write about and I've nary seen a fuck from him.

bbain is like 90s cartoons in that it seems so wholesome and yet still entertaining. And because people in my generation grew up on 90s cartoons, we think fondly of it. Not like getting kids from today to watch old Transformers, which were basically 30 minute commercials. No, I'm talking Rocko's Modern Life with hidden adult jokes in everyday great humor. bbain, you're my favorite 90s cartoon!

I am a vain person. Or at least I like to think of myself as a vain person for joke purposes. And anytime someone compliments me or follows my work, it gives me sustenance which allows me to conjure terrible demons most foul to further my dark plans. Hyper Lemon Buster Cannon was one of the first people I've noticed to actually like my stuff not just once, or even twice, but consistently. Like, he usually likes my stuff! Like a fan or something.

Our tastes really just line up but nothing stirs the creative juices more than knowing at least one person out there is definitely reading something you've invested so much of your time into. It also helps that it's always real talk with HLBC. Epic games, action packed scenes, sexy women, the works. HLBC gets it.

Speaking of vanity, Jawshbutterballz gets a mention for always liking and supporting my twitter presence, especially liking my Destructoid card work. But Jawsh is more than that.

He's also the progenitor (or close to it) of the Gardevoir meme. An earnest, unabashed love of one of the Internet's leading waifus and an advocate of waifu love in general. Don't hide your waifu love everybody. Embrace it. It doesn't seem like there's a bad bone in his body. It's all love, even if its strictly waifu love.

Mike Martin may be complex. He may be multi-faceted. But regardless of how you see his vulgar, chillaxing posting attitude and his real life venting of his tough life, Mike Martin is the realest motherfucker this side of Joystiq.

Like I always say to Mike, how does that make you really feel? Of course he's already blogged about it so yeah, there.

In all seriousness, Shade doesn't blog nearly as often as I'd like, discounting his Shadeisms like how Silverdragon describes his own Silverdragonisms was a weekly blog (don't count it). Shade's a smart guy if you couldn't tell as he works in the business of law. But he's not just book smart but street smart, cause he has good taste. And he has good blogs. Or Shadeisms, whatever. But his topics and range are enjoyable. And like I meant from the beginning, rivalries foster good content from both sides. Or at least my side. The rivalry thing is probably just in my head.

As you can see, a great deal of my favorite Dtoiders are from my generation of recappers. There's no helping the fact that I take notice of my neighbors after all. But if there's anyone here that's influenced me the most, it's someone who wasn't just a day recapping neighbor, not just a great writer, but also a wingman up for so much of my favorite games. Most of all, together, we birthed the legendary Destructoid N7 squad that saved trillions of lives across the galaxy. Just one ragtag group of aliens with a taste for min-maxing skill points and tearing through hordes of enemies without much of a care for self-preservation.

Wrenchfarm aka Nic Rowen is the person who inspired the idea of this list: rivalries. He's made some of the most enjoyable blogs I've had the pleasure of reading. He's a consistent fan of stompy robots, for better or for worse. Even past our N7 days, we've had our fill of Injustice and Persona 4 Arena before I stomped him a bit too hard into the ground with my Kanji.

But most of all, it's his quality in blogs. I read them and don't just think they're great. I want to measure up to the quality and volume of his stuff. It's no wonder he's a contributer now. It's a wonder it took them this long to notice. But on the community and on the comments, we're always there on the input. My most comfortable mood to write just happen to be Tuesday nights too, Wrench's prime time slot. It was bittersweet to see that I wouldn't be blogging in my usual Wrenchism groove when he went on the up and up. But the way the community has been traveling, it shouldn't be too hard of a loss considering it looks like we're going back to our roots and tapping into the community all the more.