6 reasons why you should check out Legend of Korra 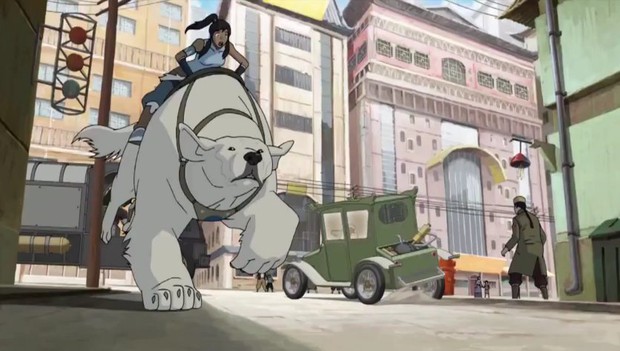 Many characters are closely attached to their home cities like Batman's Gotham City and Republic City has a lot of potential. And on a side note, try imagining how skyscrapers in the first place. Imagine a small army of earthbenders piling on stone and dirt for a strong foundation and fire nation metal workers constructing the iron skeleton to the building. It needs to be said that a city of this scale has never existed in the world of Avatar. Even the huge city of Ba Sing Se from The Last Airbender didn't have many buildings over three stories.

Music that matches the tone
Sometimes, I forget how memorable music can be in a good show. But Korra's music immediately jumped out at me due to how well it fit the tone of the era. Music that feels very swing and feels like it jumped right out of a history text about the roaring twenties.

While there are a lot of period instruments at work in Last Airbender, Korra defintiely has a large focus on violins and horn work that make you feel like you're going to a party, which is the kind of atmosphere you might find in a freewheeling, prohibition era city with supernatural powers running rampant and gang warfare constantly underlying many decisions.

Kind of makes me want to put on a fedora and go out for a drink. And if I could, I'd bend that hard drink straight into my mouth and pick a fight with an earthbender.