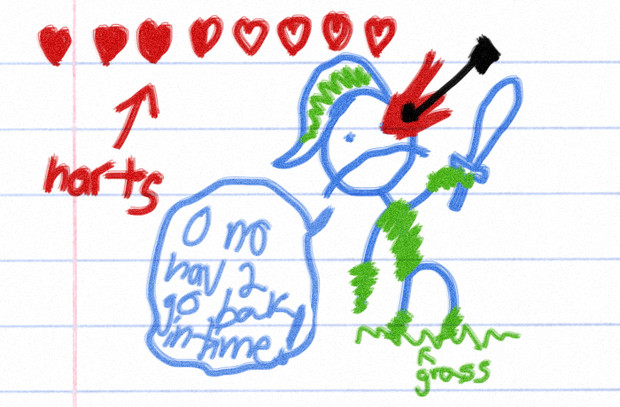 "I like games where you rewind if you die, but it still needs more details like hearts."

These moving, heartfelt words were spoken by Jim Sterling's step-son. It is astonishing to see one so young as he put forth ideas and theories so innovative and powerful. When I was Step-Sterling's age, my mind was not nearly as developed as his. I'm sure you could say the same for yourself, your family, and your friends.

In the end, what doesn't need more details like hearts? If you're baking a cake and burn yourself taking it out of the oven, having hearts above your head will remind you that you should probably use a health potion. If you're running down the street and head straight into a pole, the hearts above your head will remind you that you've still got five hearts left and it really wasn't that bad of an accident, even if you looked like a right dumbass. And, after a nice refreshing soak in the tub, those same hearts will tell you how good it felt.

Imagine a world where men, women, and children didn't know how much HP they had left. You would get some who would sit in their homes away from sharp objects or other things that may be harmful to them. They wouldn't go near the kitchen for fear of being impaled as soon as they walked in. Turning on any electronic devices would be the worst thing imaginable, because who knows how many times they could get shocked in one sitting?

On the other hand, you would find people who were completely oblivious to the fact that they had no details like hearts. They would go to forests across the world and wrestle bears, or put their genitals into piranha tanks. They would even go snorkeling. All the while they would pay no mind to their HP, which would diminish more and more with every dangerous feat they attempted to accomplish.

In the end, the world would be reduced to ruin. There would be havoc on the streets�men fighting bears, women eating their children�while others sat in fetal positions in their bathtubs dreaming of better days. The latter would die of starvation, while the former would die of many other things, like snorkeling.

Their only save would be, of course, going back in time. But what's the use of going back in time when they would just relive the same catastrophic experiences over again? They would dive into an endless cycle of pain and anguish. The human race would hurtle around a Mobius Strip, destined to repeat their tired and miserable lives over and over ad infinitum.

Many years ago, in the time of cave men, we had health bars and hearts. We worshiped them and put them on pedestals, understanding their importance. Humans were healthy and powerful, always keeping track of their HP as they hunted and fought. If they died, they merely traveled backwards in time and did things differently. Did you know that fire was invented for the sole purpose of testing to see if one's health bar was functioning properly? They would sit down on a camp fire, and if their bar began to diminish then their HP was working properly.

But alas, the years progressed and we began to forget about our health bars and hearts. People began tucking them away beneath their beds and burying them within forests across the world. Those same forests where men recklessly fight bears today.

"...we owe a cock to Asclepius. Please, don't forget to put in more details like hearts." Socrates, a Greek philosopher of old, said this on his death bed. Asclepius was the Greek god of health bars and curing status-effects. Even Socrates understood the massive importance of hearts. I am sure he would have gone back in time and not died, but he had to make a symbol of himself and remind the world about HP.

More details like hearts. This is the solution to all of our problems. Global warming, famine, war, HIV, snorkeling, and cancer. All of these things would be no more if we allowed those beautiful red hearts into our lives. Step-Sterling has done so, and I think it is about time the rest of the human race did so as well.

The holocaust might have never happened.
#Community    #OpinionEditorial
Login to vote this up!