[UPDATE 2/1/2021]: Updated download link to fix a mistake with Barret's battle model in the Kaldarasha Recommended profile. Also updated the ninostyle models with the latest patch.

Have you just recently finished playing through Final Fantasy VII Remake and are craving for something more to hold you over until Part 2? Or perhaps FF7 is something that you've long wanted to jump into but never found a good starting point. Well folks, it turns out that now more than ever is actually a fantastic time to experience the original Final Fantasy VII, as just within the past year there has been a surprising amount of advancement in the modding community that has drastically reduced the amount of headache involved in giving the game a nice facelift and bringing it up to modern standards. 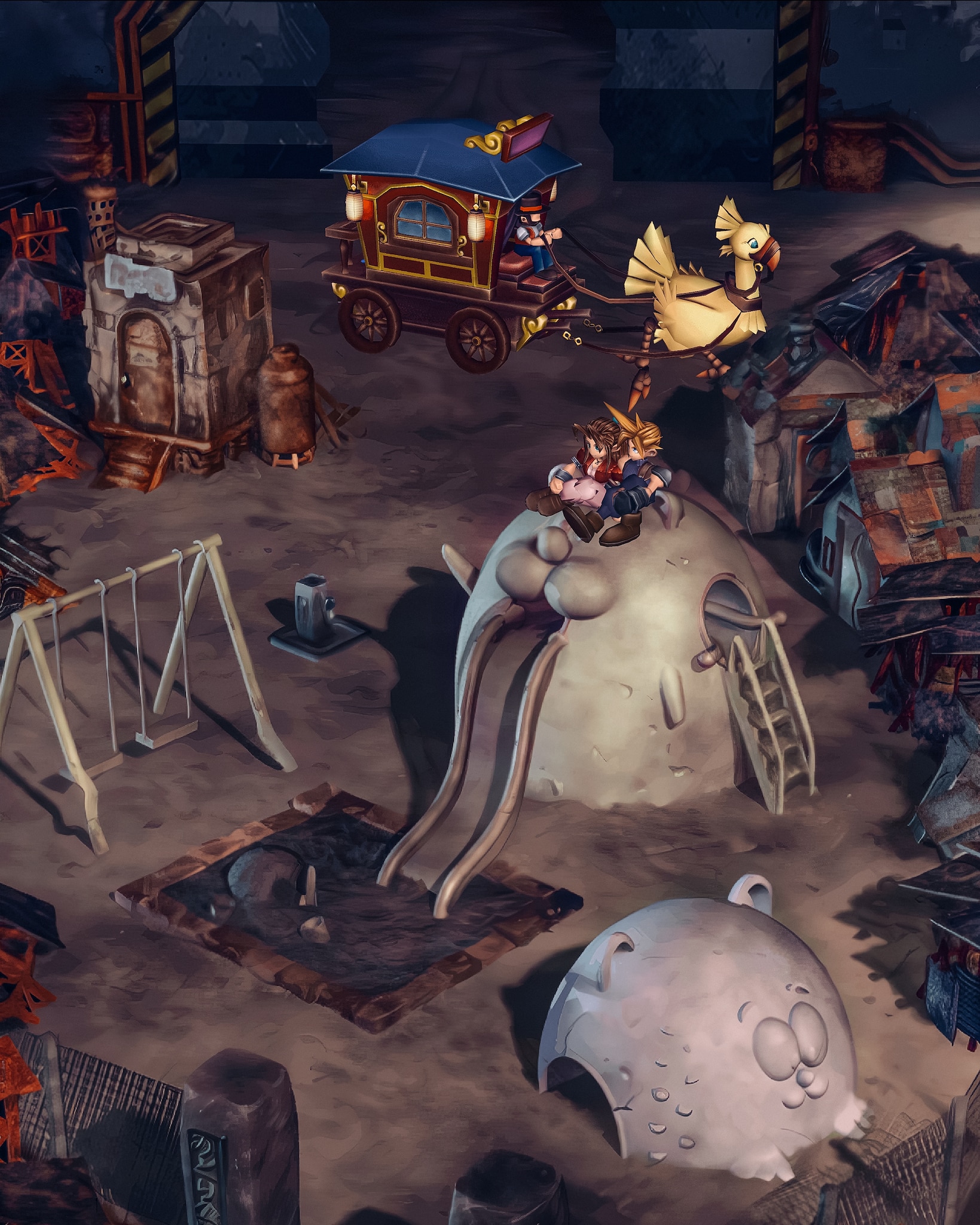 Version 2.0 of FF7's current most popular modding client, 7th Heaven, was released last year, removing a lot of tedious steps that used to be involved in the setup process, and even when you did follow all the steps right with the old version, it was still largely a coin toss whether it would actually work or not. Now it's considerably more stable. The nice thing about 7th Heaven as well is: it doesn't actually modify the base game in any permanent way. It only injects the mods at launch and then discards them when you exit the game, so if you don't like something about a particular mod that you're using, you don't need to start all over with reinstalling the game.

What's more, I've streamlined this process even further by providing a singular beeg fat download link that contains all of the necessary files and mods to get you going. A warning though: it's a doozy. Like 20 gigabytes worth of doozy. But it overhauls nearly everything in the game and I assure you it's worth it. Given its size though, you may want to get the download started now before you read any further:

My goals with this guide are primarily to:

1. Make the modding process as quick and painless as possible, and

2. Provide several preset options that aim to update the game's assets while remaining true to its original art style, as it can be very convoluted to try and achieve these results on your own.

From there, you can tweak them further to your liking, but please note that if this is your first time playing the game, I would highly recommend starting with just one of the preset profiles so you can get a better feel for how everything works, because if you start making changes without knowing what a mod actually does, you could cause conflicts in enabling multiple features that both try to overwrite the same assets. 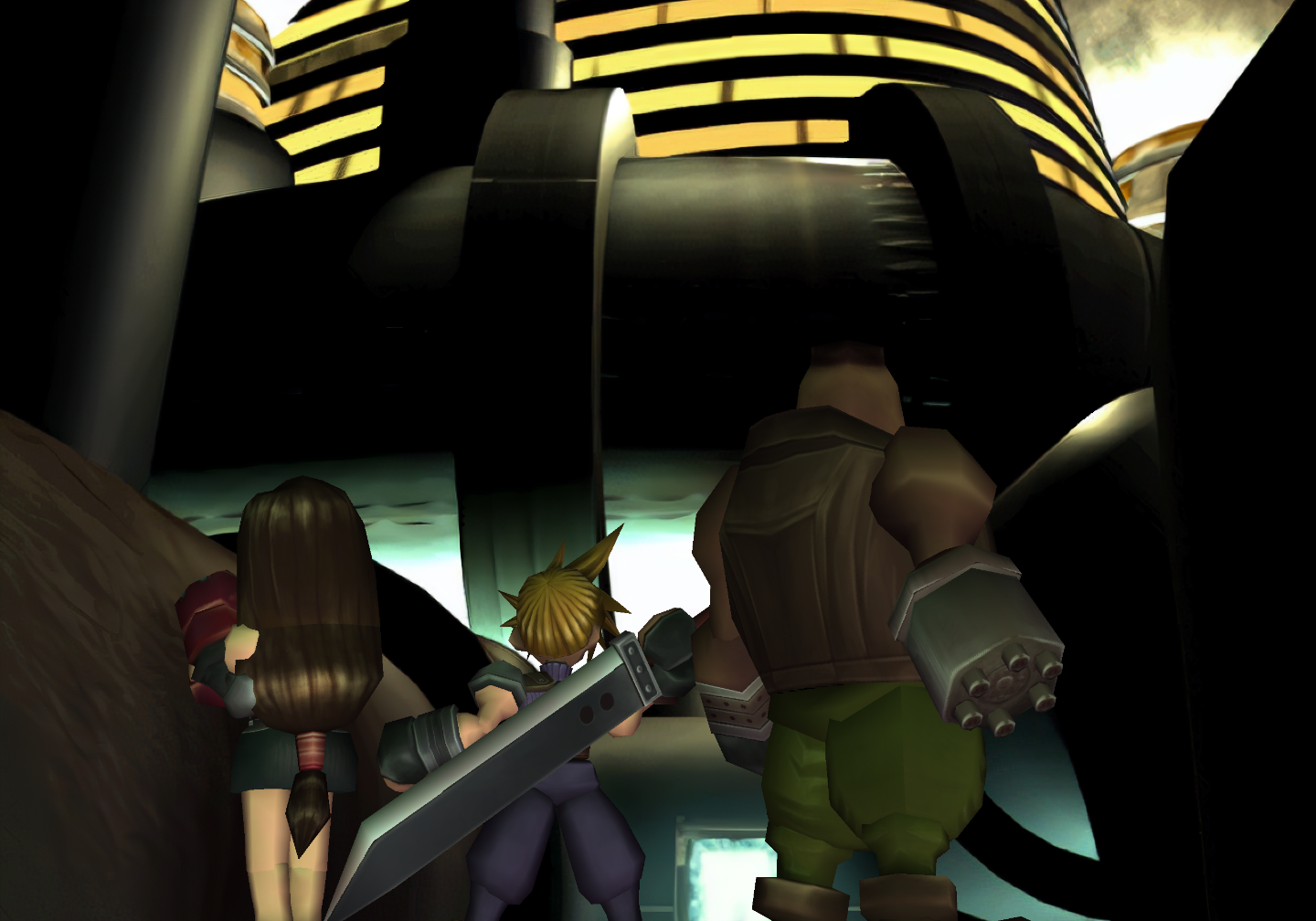 Also keep in mind if this guide looks a little overlong and daunting to you, most of the wall of text below is really just me rambling about what stuff actually does and how it works so you can make informed choices, and it doesn't really involve you doing anything much of the time outside of copy-pasting a few files here and there.

Now that we got all that out of the way, let's get started!

The Actual Guide Part of the Guide

2. Download and extract the beeg fat modding file using an archiving program of your choice such as WinRAR or 7Zip. Both have free versions available.

3. Run the setup installer for Seventh Heaven. The only thing you may want to note here is that its default install directory is right in the root of the C drive. Personally I think that's kind of an awkward place to put it for such a specific app, so I recommend setting the install path to your main FF7 directory, since there is no use for this software outside of modding FF7 and it keeps all your FF7-related files in one place. The default path for a Steam install typically is:

So in this case, you'll want to set your 7th Heaven install path to:

Or maybe you just don't give a shit and want to let all your files hang out on display right in your root directory. You do you mang. It doesn't really matter; I'm just giving suggestions here.

Everything else should be pretty straightforward clicking "Next" on stuff, but don't launch 7H just yet.

4. Now move the "mods" folder from the downloaded mod pack to your main FF7 directory. 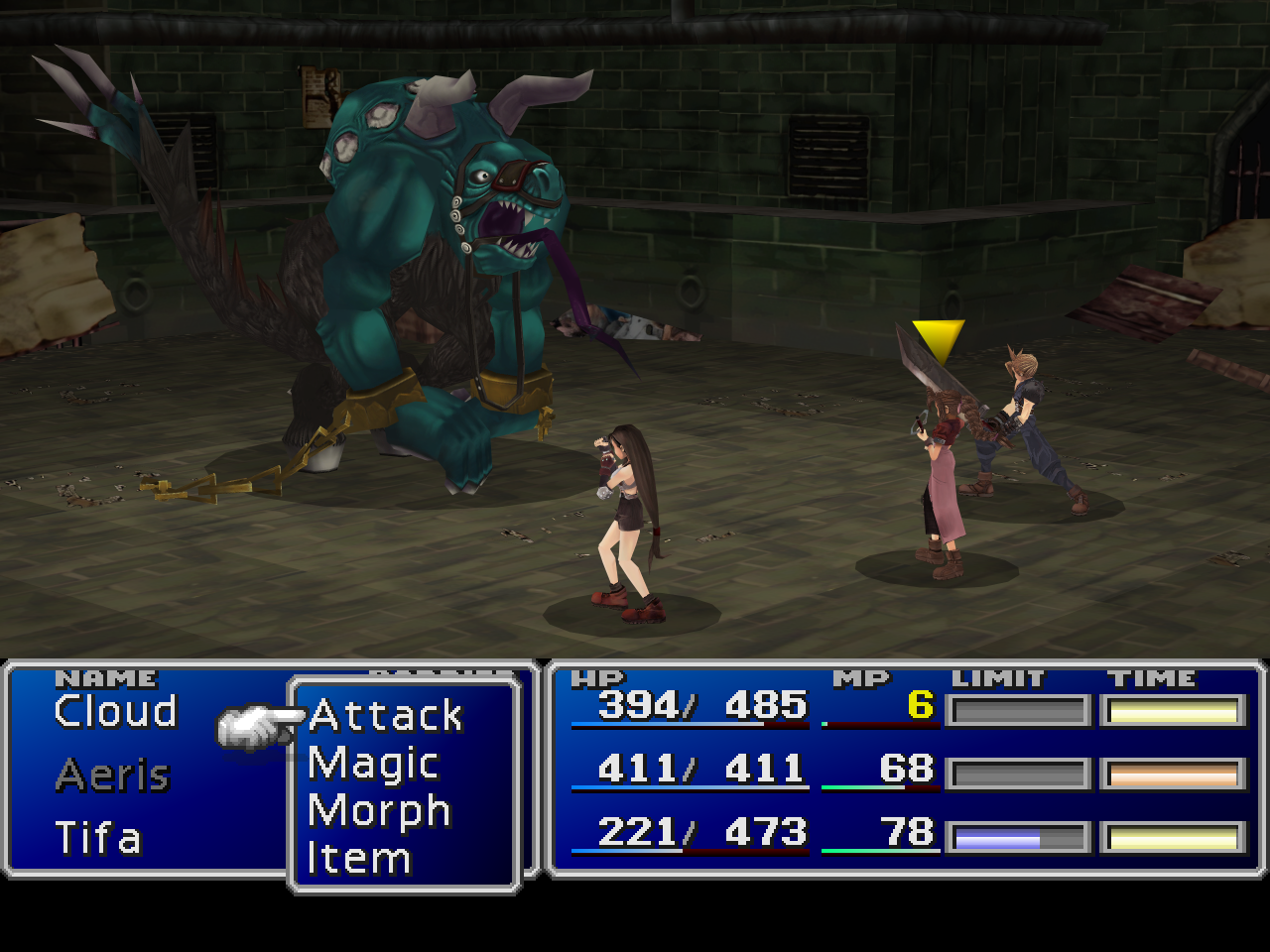 5. Overwrite your 7th Heaven folder with the one provided from the mod pack. If you installed 7H to the main FF7 directory as described above, that's where you'll need to navigate to in order to do this. If Windows asks whether you want to replace any files, make sure to do so.

Copying these files over will automatically configure some tricky settings for 7th Heaven, like the game's internal resolution for example can only be changed from manually editing the GameDriver.cfg file. The modified file in this pack will update it to increase the internal resolution from the default so the game will look sharper. If you really want to tweak it to your liking though, you can just edit the file yourself by opening it in any old notepad software.

This will also add a couple of extra control schemes for SNES and Xbox Wireless Controllers, as well as install our preset profiles for all of our mods.

6. Now launch 7th Heaven. It may immediately greet you with a General Settings screen to configure. If not, go there first by clicking on "Settings" from the top-left menu and then "General Settings".

Don't be alarmed by all the sliders and options. You only need to verify that all your directory paths are correct. They should all be linking to various folders inside your FF7 installation location. For a Steam install of FF7, these should look like:

If they don't look right, correct them and click Save. You don't need to touch any of the other options. 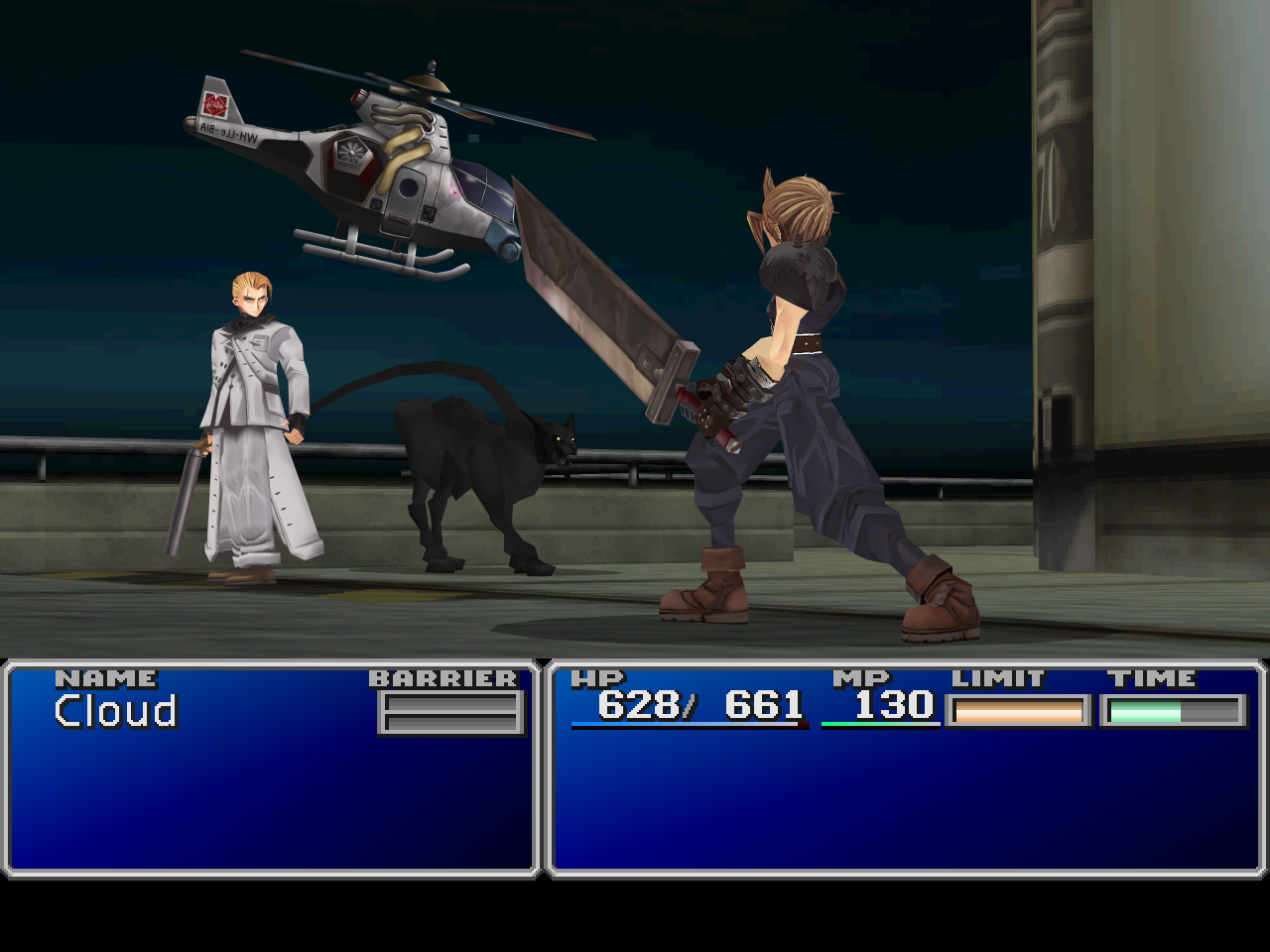 7. It's time to choose a profile for what mods you would like to use. Go to Settings > Profiles...

I have created several preset options for you which I will break down here so you can better understand what they do.

There have been lots of fan mods over the years; some of which were started and never completed, some that are still a work-in-progress, and some rare few that actually managed to stick it through to completion. Because of this, it is tricky to provide a set of options that will give you everything you might be looking for, so to the best of my ability I have compiled a few choices that I think will give the best results.

As many may know, FF7's original character models were notoriously "blocky" to say in the least; even more so than other games of the time. When you're in combat, they look alright, but out in the field and overworld, some might say it's just a little too abstract to put up with, so there are currently two prevailing sets of character models to use right now which address this. One is Kaldarasha's ChaOS model set, which overhauls ALL of the game's character and NPC models to look more like their higher-detail battle models. This mod is actually fully complete, so there are no unfinished models or inconsistencies to be found here. That's why I generally recommend this option for first-timers as it will give the most complete and cohesive experience. 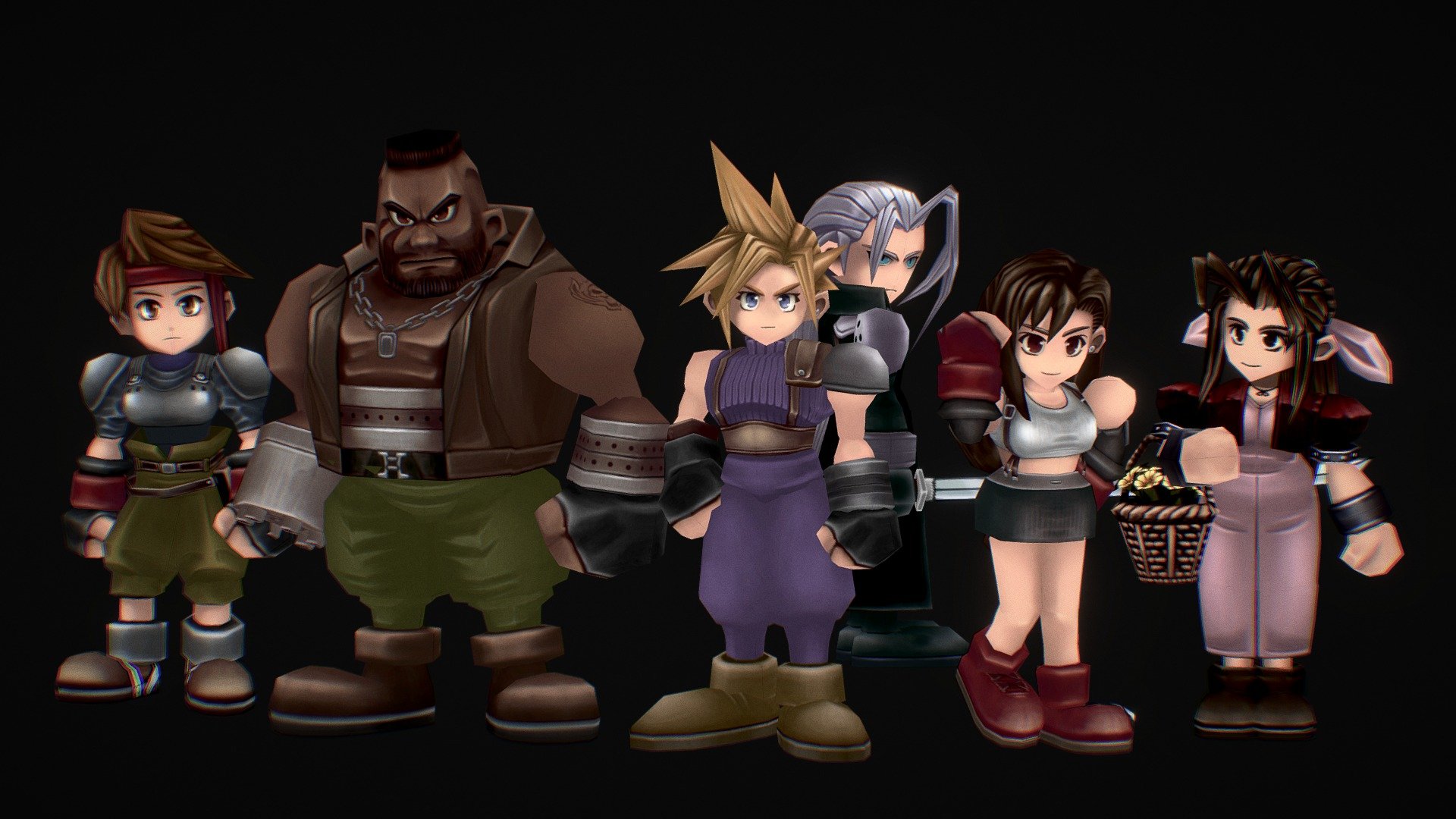 The other model set is ninostyle's chibi models, which very charmingly update FF7's art style to strike a more classic JRPG look that the original authors were probably going for at the time but the technology just wasn't there. This is a perfectly fine option too, but it comes with some caveats. It's still a work-in-progress, and roughly only 50% of the models are done. The plus side is, all of the important and major character models are included in that "done" part, so it's only some rando NPCs you might encounter still running around in their original blocky state. And this art style blends in better with the original models too, so it doesn't look so jarring side-by-side, but nonetheless it is an issue to consider if that bothers you.

Lastly, you might be wondering what's the difference between the "Balanced" and "Pretty AF" options for these two sets. In addition to the chibi models that ninostyle has been developing, he has also been hard at work redesigning many of the game's battle models to be higher detail and look more like the game's concept art depictions of the characters with this sort of sketchy pencil-like look. It's a really cool aesthetic, but once again, it's far from complete, so enabling it will result in a lot of jarring inconsistencies in art style. That's why I give you the "Pretty As Fuck (AF)" option, so if you just don't care about consistency and want to have the highest detail models available, have fun and let loose. 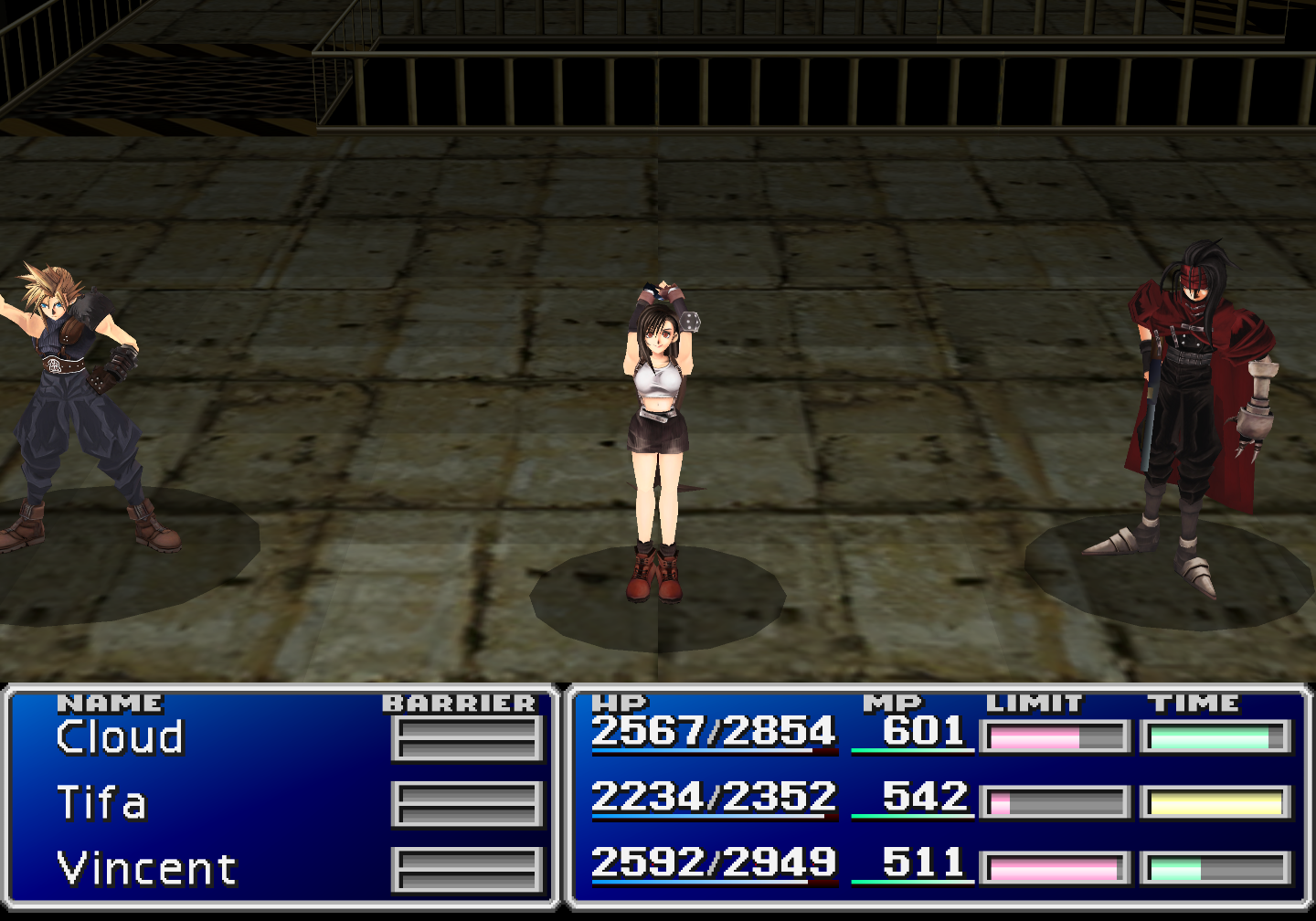 All of these presets use satsuki's upscaled backgrounds and retextures. Remako was great for its time but I think it's already been superseded by satsuki in quality, so until Remako 2.0 comes, this is definitely the better choice. I still used Remako's cutscene videos over satsuki's though as I found them to be slightly sharper and higher detail than the latter's; giving it a subtle edge in quality, though you can't really go wrong with either.

Of course, if you're a real purist, you can choose the "Purist" option which mostly leaves the game untouched outside of upscaling the backgrounds and environments.

Anyway, after you've chosen your profile, you may receive some warning from 7H about how the Animation mod might cause your computer to asplode or some such nonsense. Just ignore it. It doesn't know what it's talking about.

8. Select your preferred control scheme by going to Settings > Controls...

Note that you don't need to click "Save" after selecting a control scheme. You only need to do that if you modified one of the presets.

Most of it should already be correct, but mainly make sure that Window Mode is set to Fullscreen and Resolution matches your monitor's native size. Remember that this is only the display resolution; the game's internal resolution is handled elsewhere and will not change regardless of your setting for this, so just make sure it matches your screen.

Anisotropic Filtering should be turned on; Linear Filtering off. Turn on VSYNC if you feel that you need it, but it's not required. 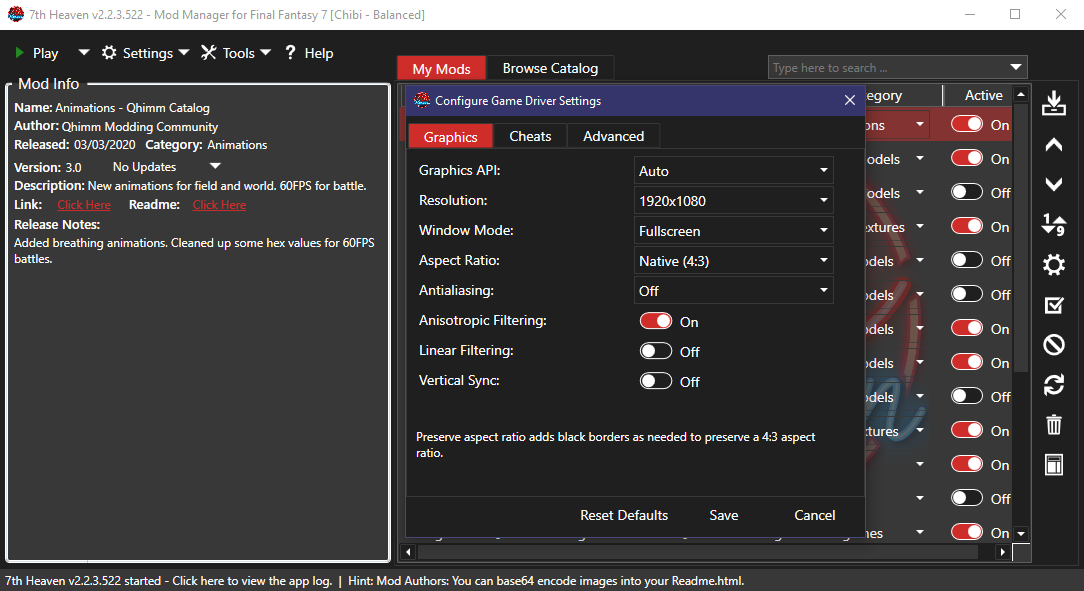 Anti-aliasing isn't really necessary when you can always just crank up the game's internal resolution instead. A game from 1998 isn't exactly demanding on PCs anymore.

Change the tab to "Advanced" and verify that VGMStream is set for the Music Option and FFMPEG is set for Movie Option. Fancy Transparency should be turned on. Everything else can be left Off. Click Save.

10. You are now ready to play! Clicking "Play" may give you some initial warning messages during first-time run. These can be safely ignored and just click "OK" or whatever option it gives you to close them.

And that's it! A lot of words but not as many steps as you think. As an added bonus, I also threw in my own mod for the soundtrack called "Rotty's Choice". You can enable it in your library if you want to, but you have to manually do it after choosing an initial profile from the previous steps. It will give the soundtrack a nice overhaul with a largely more orchestral feel to it. If you choose to enable this option though, make sure to double-click on the other "Media" mod and disable the music soundtrack so it doesn't conflict with mine.

Have fun. Show off your big HD swords.