9:50 PM on 05.13.2008 (server time)    0
Funny timing for Doc Boa to announce his development intentions literally hours before I post this, but dat's cool. Although I can guarantee that my game has a much smaller budget: 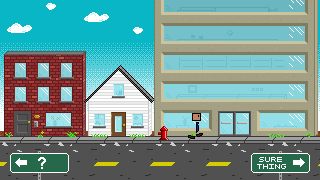 Copypasta from my site:

The game is called Late Again, and it follows the exploits of a downtrodden cubicle jockey who awakens to discover that he's late for work. And you've got to decide if he's going to take the safe route to the office, or explore an unfamiliar and potentially disastrous alternative. It's short - maybe 5 minutes - but I like how it's coming together, especially for a first attempt. I was deeply moved by Jason Rohrer's Passage when I first played it last year, and I think I'm subconsciously trying to achieve the same thing; a really short game that somehow expresses something valuable. I'll let y'all know how it comes together! You can expect to play it in June.
#Community
Login to vote this up!