Atari Boned, Yours Truly Gets The Axe 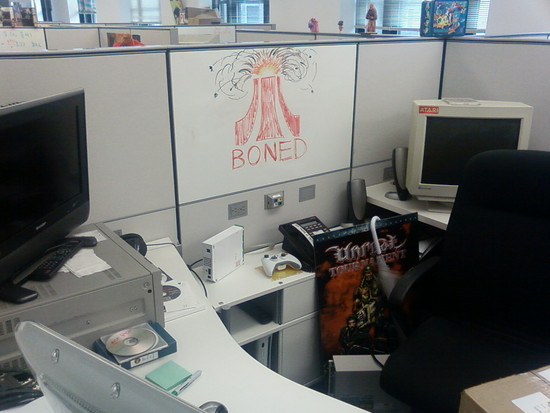 And a good thing too, because after several months of behind-the-scenes hemming and
hawing, the restructuring officers at Atari, Inc. have seen fit to show me the door.

Of course, I can't say I didn't see it coming, but it's distressing nonetheless. I can't really
be upset; this is, after all, what a company is supposed to do when things aren't going
well. But when a patient is so far gone that you have to start cutting off vital organs to keep
him alive, then you have to wonder how much time the poor sap has left anyway.

I was Atari's "Digital Media Specialist," which is a new-wave marketing term for video
editor. I have cut every trailer and gameplay video for Atari since Bullet Witch (I'm
sorry, BTW), and was almost done with the trailer for N+ when the news came down.
See, when I started at the company, I was taking over for another guy who had switched
out of the position to work for the IT department. I picked up where he left off (playing the
aforementioned Bullet Witch for about 4 hours a day... *RETCH*) and things continued
normally.

This time, however, they decided to cut the position entirely. They fired me as well as the
other guy from IT, so now Atari has roughly $15,000 in editing equipment (including a G5
Mac that started life as a first-gen Xbox 360 devkit) and no one qualified to use it. In
addition, they fired the guy who makes all the magazine ads.

Previously, most of the mass firings involved the removal of redundancies; departments
were stripped down to skeleton crews and everyone picked up someone else's work. But
now it seems that they're planning to farm out these jobs, so they'll probably end up paying
our annual salary every month to creative agencies, completely negating the
immediate cost benefits. And that, my friends, is cause for concern.

So here I am, back on the market again. I guess I should be glad that I didn't stick around
long enough for Atari to become detrimental to my resume (I'd say anything longer than a
year would look pretty bad), but it's still frustrating to be given only an hour to clean out
your desk. Time to start making calls.

On the bright side, I now have some time to play Super Mario Galaxy. Optimism FTW.
#Community
Login to vote this up!