Wii Reviews: The House of the Dead: Overkill

I decided to go back and play those 50 games and review them, atl least those that intrest me and those that I hae not played before. Origianlly, I post most of my stuff in a football forum "Goallegacy" which is the first online community I have ever joined. Which is the best place for a football fan (the REAL football, not handegg) to hang out in the internet. 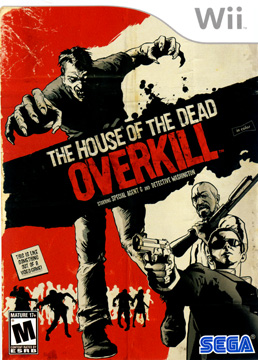 The House of the Dead series has always been a typical zombie rail gun game with a typical zombie story. Some secret agency or another developed a bio weapon to dominate the world, and a couple of cops or something need to stop that from happening.

With Overkill, we have the typical zombie rail gun game, but the story is anything but. Here we have a funny, crazy take on the series, and it aims to shock anyone playing it. And boy does it succeed.

Overkill takes its subtitle seriously, as it tries to be over the top in every way imaginable. Starring Agent G (whom the game seldom misses a chance poking fun at code names in general) and the foul-mouthed cop, Isaac Washington, the game is basically a buddy cop movie. Except, it is one of the most foul of those movies.

Every other sentence is punctuated with a swear word, and the dialogue is internationally infantile, and is actually funny as a result. This is not a game taking itself seriously, but one with intentional self-depreciating satire built in. If you didn't get that, the game will actually break the fourth wall to explain it to you.

This batshit style is what ultimately separates Overkill from all other games. Starting with a title sequence featuring a low-res FMV pole dancing scene, the game clearly shows its inspiration from B-Movies in road house cinema, complete with the missing reel trick. 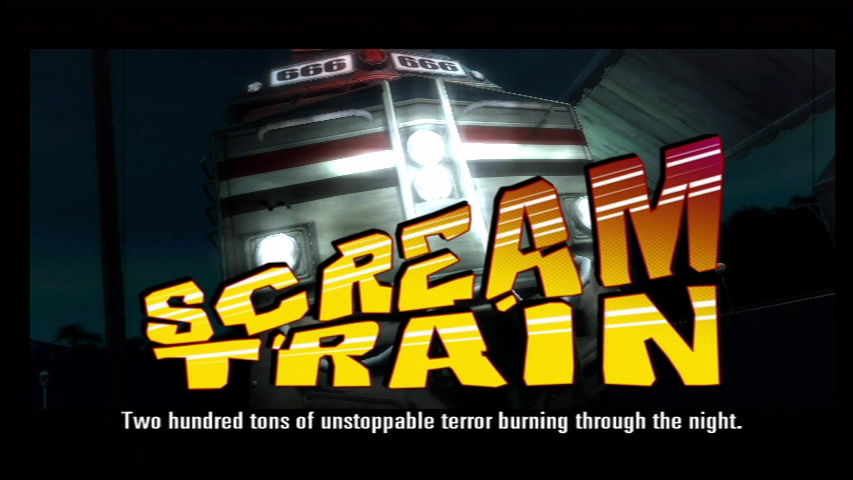 Along with cheesy title screens and quotes

Most of the time, the game's over the top humor is funny or at least simply tolerable. Some lines fall flat, while others doe actually inspire some laughter. However, the game does actually veer too far in crass humor, at one point uncomfortably making fun of a character's handicap.

Ultimately, this is a game that you will judge purely based on how you respond to is crass brand of humor and the interaction between Agent G and Isaac. If over-the-top and foul mouthed buddy cop antics is not your thing, then this will not be a game that you enjoy.

Funny Story and Dialogue: +4
Commitment to Its Style: +4
Sometime its just Too Much: -2

"We are in an express elevator to he...Man, SHUT UP and the press the Damn button"

As the first and only game to be exclusively made for consoles (as opposed to Arcades as well), you might think that Overkill's rail gun gameplay is different from the rest of the series. This is not the case, as the game still retains the focus on scoring typical with Arcade games. Hence, the game is designed with multiple playthroughs in mind, and is predictably short.

However, whereas I remember The House of the Dead games actively trying to rid me of my coins, Overkill is a pretty simple affair. Not until the final level was I threatened, and my score was never in jeopardy because of death. If you don't even care about your score, then dying is nothing but a temporary pause.

This simplicity works against playing the game more than once, especially when combined with the game's basic gameplay and lack of variety. Its your basic Wii rail shooter, with a point and shoot mechanic using only a few really similar weapons. As for variety, there is very little in terms of actual zombies, and the stages are the same everytime you go through them. 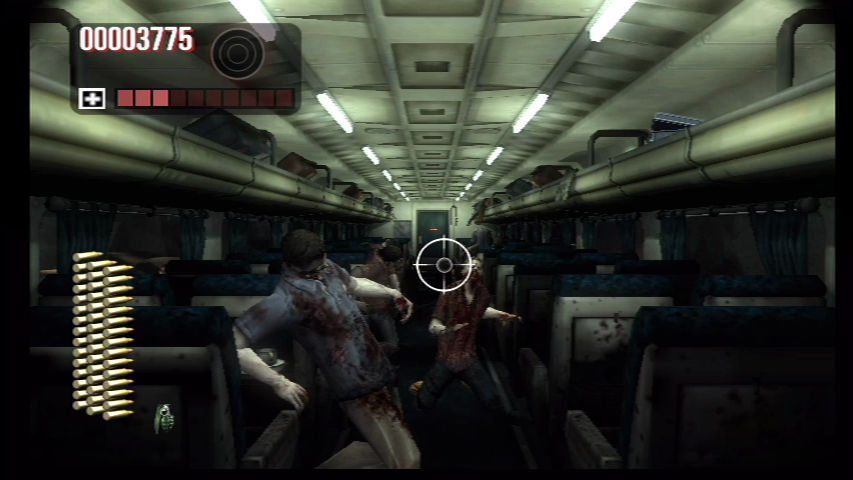 That is not to say the basic gameplay isn't fun. It never gets old blowing a fat zombie's head with a shotgun, but it is not the main draw of the game. Maybe with alternate paths, more zombie variety, and some actual challenge the game could have been better.

To complement its crass, childish adult humor, and unique style, the game tries to pull off the B-Movie style. It generally succeeds in doing so.

Let's start with graphics, which are muddy, not really pretty at all, and sometimes suffer from a frame rate drop when reloading. Its not actually ugly, and the game rarely suffers because of it, but a lot of other games on the Wii look considerably better than this.

What saves the game from being a complete visual mess is its art direction, specifically regarding the creatures you face. The zombies are all generic fodder, and with the exception of the freaky clown, they are the regular Extras working in every zombie movie. It is the bosses that are serious nightmare fuel. One zombie is two twin joined together in a horrific fusion, while another is simply the result of a lot of motherly love. 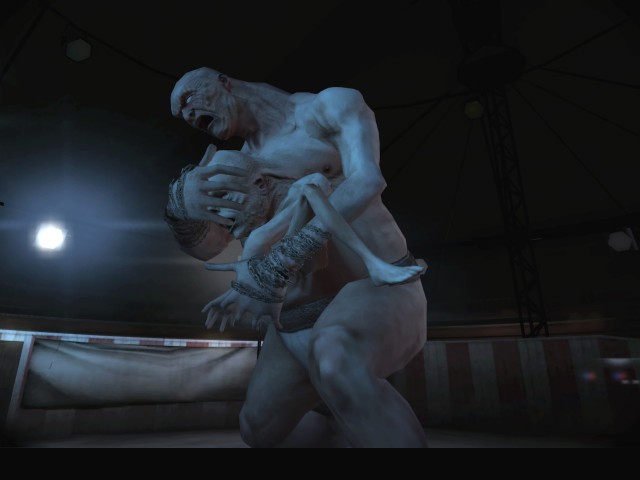 It is the audio however that steals the show. Starting from the cool sound effects, especially the announcer calling a "Goregasm" as the American flag flutters in the corner, and ending with a really good soundtrack.

You rarely have time to notice it in the hectic parts of the game, but once you do, it helps you get into a serious shooting groove. As a collection of cheap tracks from unknown singers, it works well as a B-Movie soundtrack, and works well for the game.

It actually gives you the best incentive to replay the game twice, so that you can unlock those tunes and listen to them while taking a look at the game's grotesque gallery.

Yet, for anyone who actually plays the game, it will be remembered for its two characters, and the over-the-top juvenile humor it employs. It should also be remembered for actually being an effective satire of itself, unlike the stupid Duke Nukem game.

For you, any enjoyment you get from the game is hinges on your tolerance to its crass humor and your ability to appreciate the satire within.

Here is another Wii game review from Jonathan Holmes, who gave this game a 7, summing it up in a similar way to my own: "In the end, how much you enjoy HotD:Overkill will have a lot more to do with how much you like horror/comedy movies, and a lot less to do with how much you like videogames. If you thought that Black Sheep was the best movie of 2008, or if you can quote at least one line from Shaun of the Dead, Evil Dead 2, or Planet Terror, HotD:Overkill may very well end up being one of your favorite games of all time. Hardcore light gun game fans will also find a lot to enjoy, despite the fact that there are better games in the genre out there. HotD:Overkill may not be an epic, ground-breaking game of the century, or even the best on-rails shooter released this year (I'm looking at you, Dead Space: Extraction) but it's got some of the most memorable cut-scenes in the history of gaming, as well as some of the most fast-paced zombie shooting action this side of Left 4 Dead." 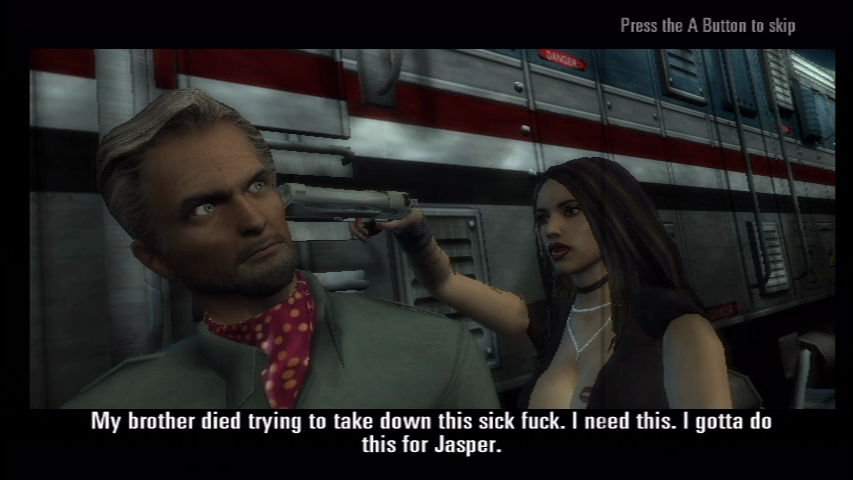 Here are two of the main caricatures in the game

Based on Sega's own word, Overkill exceeded all expectations by selling around 870K Unit. It continued the strong showing of the Rail Gun genre on the Wiil proving that the system's motion control have managed to jolt a previously dead genre on consoles to life again. With the release of the PS3 cam, Sega actually released the game on that console, but it didn't sell as much. 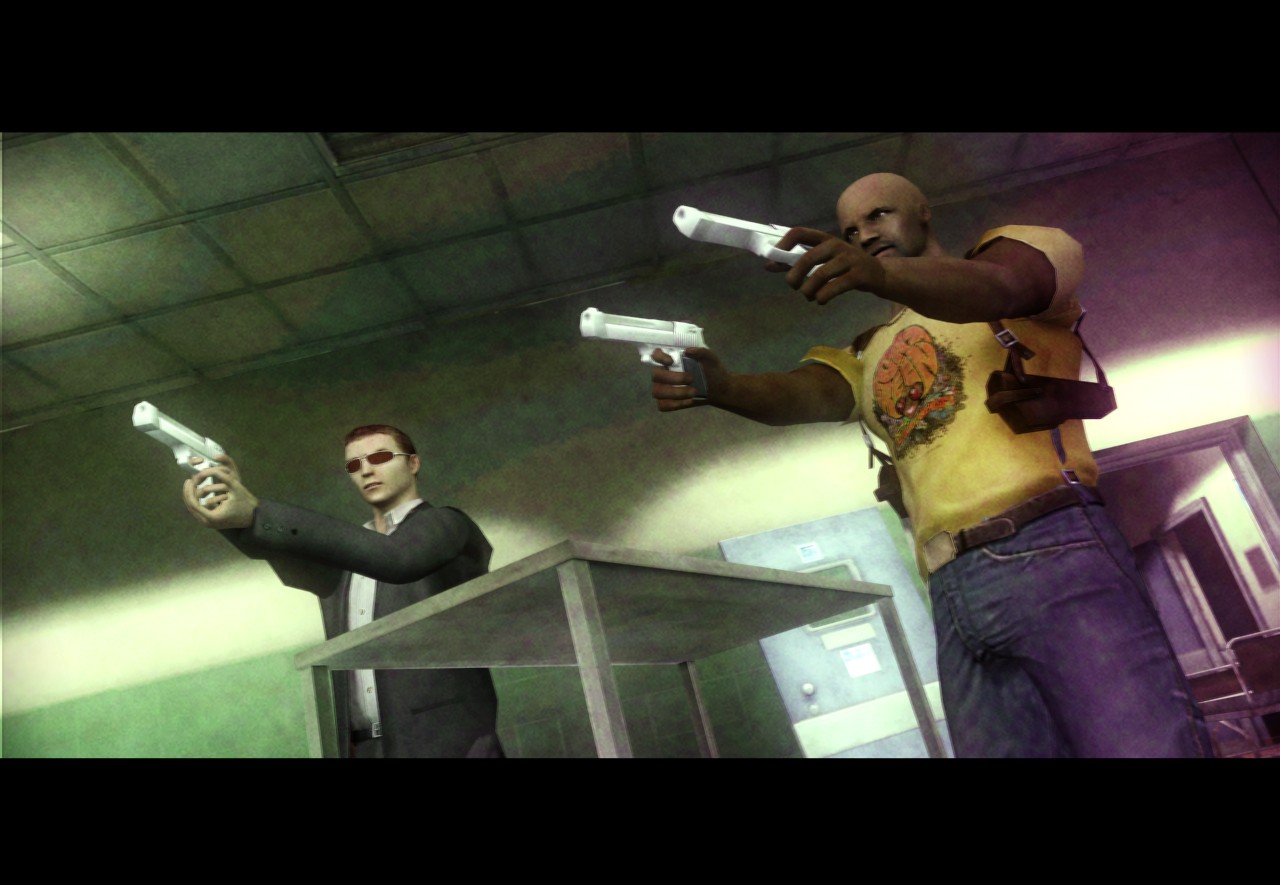 And here are the other two clowns, the main characters Agent G and Issac Washington (guess who is which)

1- If you want to make it super easy, simply buy the shotguns and upgrade them.
2- You can easily get combo hits by focusing on the body and ignoring the consistently jerking heads.
3- Do look around the environment and see if there are any golden brains or grenades to shoot.
4- Combos and activating the more zombies feature are the key to getting a high score.
5- For bosses, simply hitting the weak point enough times will stop any of their attacks

I will be honest and say that I wished for a more basic House of the Dead experience, but Overkill was good for what it is. One thing I couldn't do was actually play the game with someone being in the house.

Next game is the highly rated revival of the classic Punch-Out series, with Punch-Out!! on the Wii at #23. As someone who enjoyed the early Punch-Out games much later than they were released (playing it my SNES reviews series), I am looking forward to this game.