I decided to go back and play those 5o games and review them, atl least those that intrest me and those that I hae not played before. Origianlly, I post most of my stuff in a football forum "Goallegacy" which is the first online community I have ever joined. Which is the best place for a football fan (the REAL football, not handegg) to hang out in the internet. 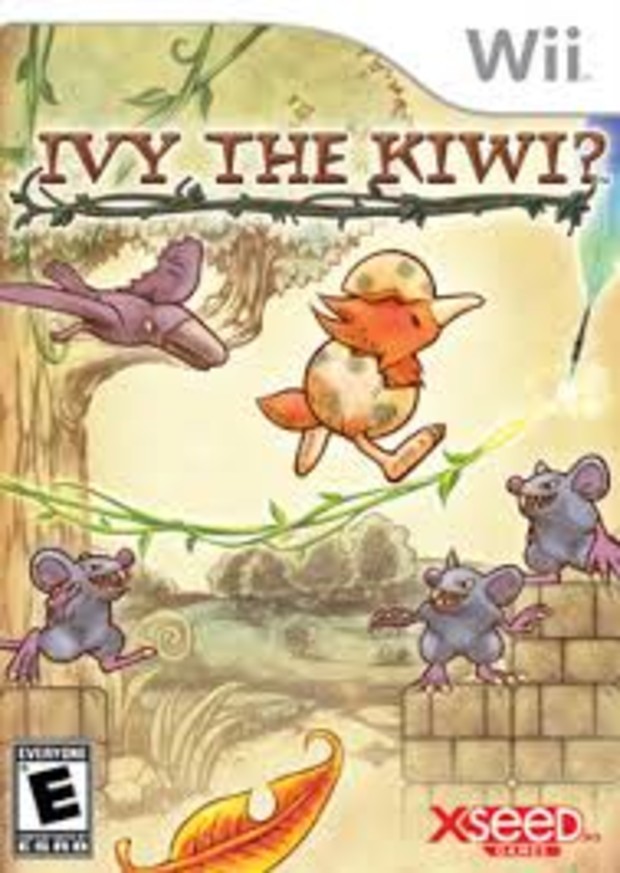 If not for that connection, I find it hard to see how gaming websites would even look at the game. Made by a nearly unknown developer, published by the little known (but very resilient) Xseed, and featuring a new platforming character in the console that is brimming with platformers.

Additionally, business decisions and pricing options also contributed to the low sales of the game. No one would buy the game at this high of a price, and the game itself could not justify it. Which is unfortunate, because Ivy is a nice enough game that could have succeeded if handled differently. Especially since it has a very solid mechanical base to build on.

"One day a polka-dot egg fell from the sky"

From the egg, hatched a red bird that couldn't fly. It looked around, and without a sound, it realized her mother could not be found. At that she began to cry, and as she looked around, to find her mother she must try. And so, the bird named Ivy (but what had named her so) began to run, beneath the snow, the rain, and the scorching sun. As Ivy ran, the player watched, her path he drew, with vines stretched. Because without the player Ivy may fall, and her mother she would not able to call. 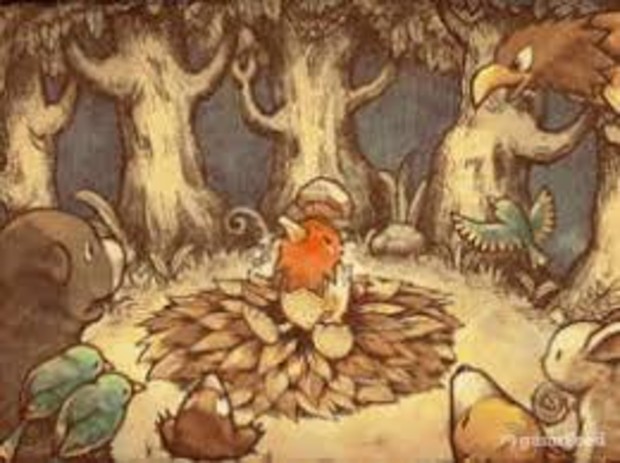 Ivy the Kiwi is set up initially as a fairy tale, and from that set up comes the entire story-book design. Unfortunately, besides the beginning and end, the game does not uncover any pages throughout the chapter. Its not like I needed a narrative reason to go through with the game, but even little lines of dialogue to show you the game did not forget its roots would have been enough.

The story-book style is not unique to Ivy, and has been done before and in a bigger way in the Yoshi games. Even though, the Ivy story itself is nice enough that I can use as a bed-time story to the youngest members of my family.

Mainly, Ivy's search for her mom is just the plot reason for both her inability to fly, and for her run through the levels. Levels of which there are few off, too few for a full retail price.

"Ivy set off running, searching for her mother"

Since Ivy is a child, I am going to forgive her suicidal tendency to run without break like a road runner on meth. Because she cannot fly, Ivy thinks that running in a straight line would somehow compromise. She only changes direction if she hits a wall or something.

Here is where the game's unique platforming comes into play.

While Ivy is busy running without any control from the player, the player has the ability to draw vines with the Wii Pointer. These vines can act as both ramps and gap stoppers, but also should be used to cover dangerous obstacles and otherwise guide Ivy's path.

However, Drawing vines is not static, but is a dynamic activity. For instance, you can draw a vine behind Ivy, and as she runs, you can move the vine and push her with it to launch her forwards and upward. In fact, this dynamic usage of the vines is more important than the static laying of bridge vines.

Another use of the vines is as a sling of some sorts. By pulling on an already placed vine under Ivy's kegs, Ivy is then launched opposite the direction of the pull to destroy a number of obstacles and blocks.

These obstacles are periodically introduced to the game to switch things around. From rats that move right and left, to crows that move up and down. And of course, the most dangerous of all, droplets of what I can only assume is highly concentrated Hydrochloric Acid that dissolves Ivy completely on contact. 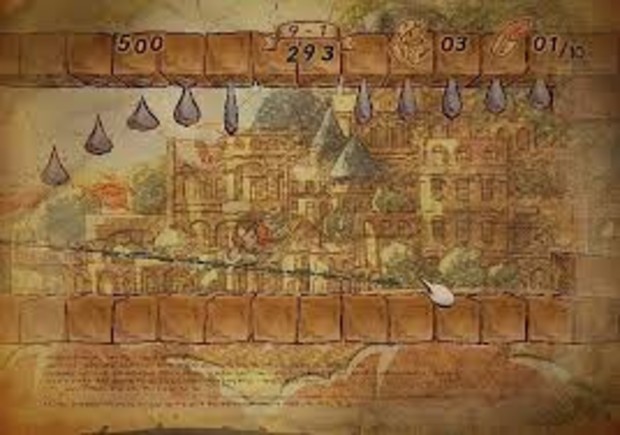 Hence, you have to worry about a number of different things, including collectibles, as you help Ivy navigate each level. Which is a both hectic and rewarding process that can be used in widely different ways.

Unfortunately, the game doesn't use the mechanics to their fullest potential, and would rather invite you to master the short campaign it has than to fully explore the possibilities within its gameplay.

Similar to Sonic, this is a game about mastering a limited number of mechanics that can make Ivy do widely different things. Using dynamic vine movements to throw Ivy from one side to another, all the while trying to keep her away from crows and rats, as well as draw shielding vines to keep the drops of Nightshade Poison from killing Ivy, is as a hectic as it sounds. But when you are able to pull it off, you feel like champ. Especially since there is probably no better way to do this than the Wii Pointer.

Taking from its story-book inspiration, Ivy the Kiwi uses a story-book style in its graphical presentation. Its a charming style that fits the game, but there is not enough variety in locations. Hence, outside of the different backgrounds, and graphical filters, there isn't much here that suggest work from the developer.

Aside from the levels themselves, the storybook that is featured at the beginning and end of the game is very well drawn. It looks like what a real story-book would look like, and what the game aimed for in the start. 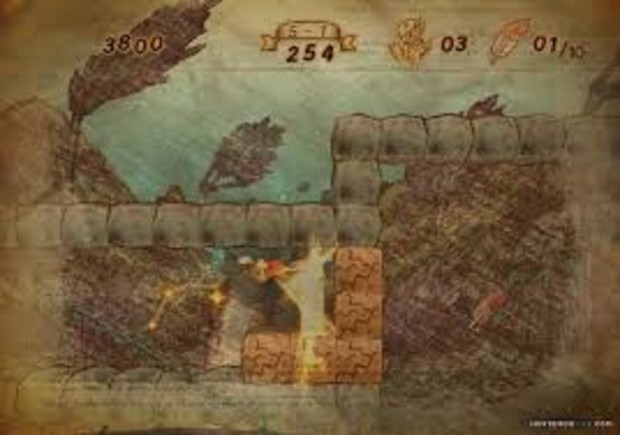 Similar to the graphical presentation, the music fits well with the game, even if it repeats itself more often than it should. With probably only 10 tracks, each track should have had a longer melody before it looped to give it more substance.

Sure, its a nice enough sound track, but the final two chapters shouldn't have had the same music.

As a Wii-Ware game, or even an eshop-only title today, Ivy the Kiwi would be a game that is easy to recommend. However, as it was released; as a retail-game. The game, like Ivy herself, does not have the wings to carry it far.

This is why, even though it is a mechanically great game, Ivy commercially flopped. This should have been sold in the same category as Super Meat Boy, not with Super Mario Galaxy.

There was no review for the Wii version of this game in destructoid.

As Everyone probably expected, this game flopped commercially, only managing to sell 70 thousand units on the Wii. It also managed only similiar numbers on the DS and abysmal numbers on mobile devices. Which is a bummer, because this game could have had wings with smarter pricing and marketing.

1- Use Dynamic Vine movement to navigate Ivy around.
2- Collect all 10 Red Feathers to get a life.
3- If you want to get red of all your vines quickly, just draw dot vines on the outside quickly.
4- Sometimes it pays to put Ivy in a vine cage as you plan your next move.
5- Sometime it pays to destroy crows and rats so that you don't have to deal with them.
6- Time can be a real pain, so watch that clock.

Ivy the Kiwi should be re-released on the eShop. It would be perfect as even a 10$ game. However, I cannot imagine paying 40$+ for it at all.

Now, I am going to play a game by the wonderful Platinum games, MadWorld. Which is at number 45 in Gamesradar list. MadWorld is a hyper violent game with a unique visual flourish that turned off more people than it excited, but Platinum are not known for their sales anyway.

There are no screenshots for this game at mobygames.com