Wii REVIEWS: A Boy and his Blob 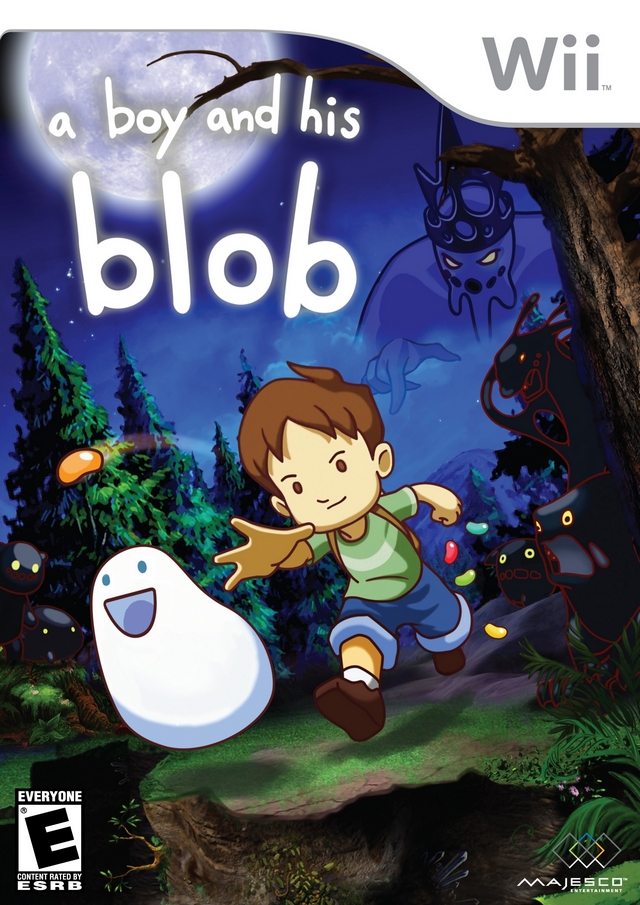 A Boy and his Blob is exactly the game the Wii was made for. I do not mean a game that was is only possible by using Motion Control, but a game that did not need the extra processing power of the PS360 consoles.

A simple, mid-budget game, that manages to look great and play well on a weaker console. Even if a lack of ambition is a little bit detrimental to the final product, as in this case.

"One day, an Earth boy came to save Blobalonia"

Apparently, this game is actually a remake of a NES classic. Looking back at that game, I am actually surprised at the mileage the original game manged to get out of the NES. No similar technical effort is attempted this time.

As you can gather from the title, the game is about a boy and his blob, which is a sentient blob-like being (hence the name) that can transform into many shapes. There is an overarching story to the game about an evil blob king's attempt to control Blobalonia. However, outside of the game's manual, the opening movie, and one bonus art work, it is never alluded to in the game.

That's because the developers made a conscious decision of limiting all story and writing from the game. Simply put, you start the game in the Boy's bed, get introduced to Blob, and finish the game without a single word of instructions or dialogue. 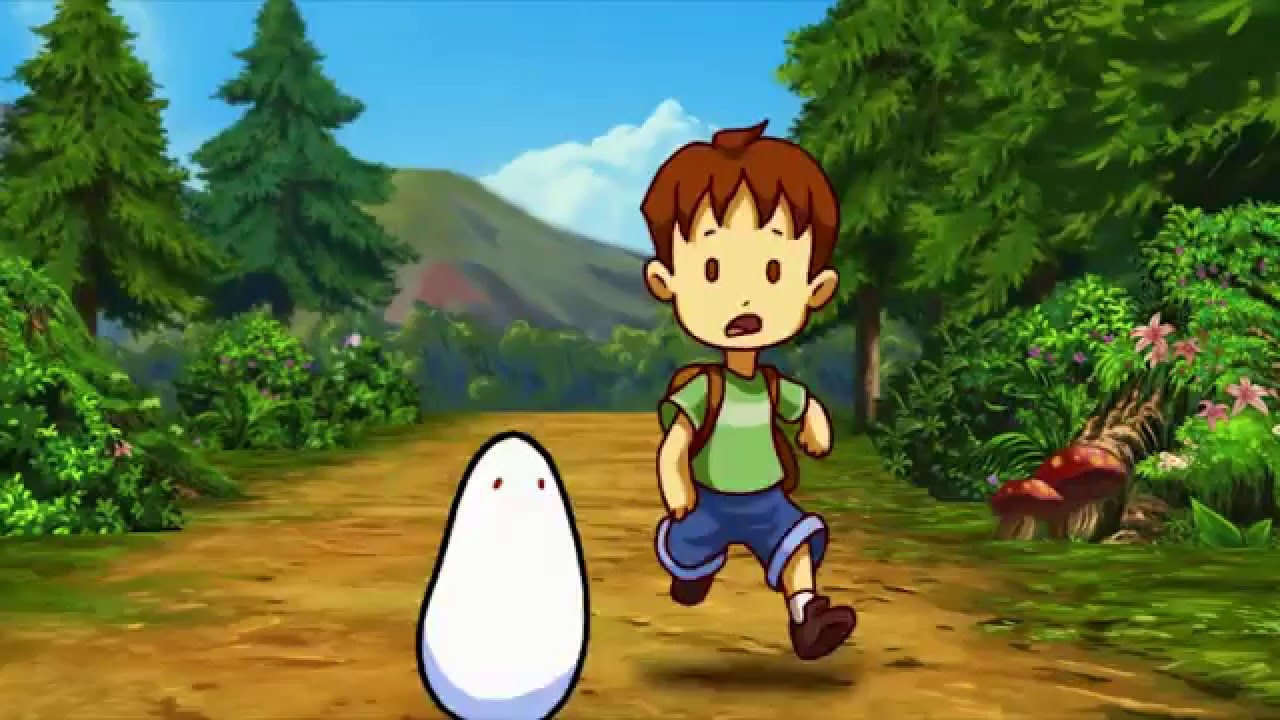 That's the Boy on the left

Obviously, the developers wanted to build an emotional connection between the boy and his blob. This is the only reason they actually put in a dedicated hug button, at which the boy will hug the blob in a charming and endearing animation.

Unfortunately, they do not exactly pull it off, mostly because they never introduce the danger in any effective way. Earlier appearances of the evil blob king would have been effective.

That is not to say that the partnership is not charming. Simply, that it is obvious the developers wanted to build a Pixar level connection between the two, and they fell short in that goal.

The boy is brave and resourceful, but he is still a 6 year old boy. As such, he has a low jump, cannot fight any small danger, and cannot swim. These are all obstacles the player must puzzle out by the help of blob.

Equipped with a bag of infinite jellybeans, the boy can help blob transform into a variety of objects to solve puzzles. These transformations are the core mechanic of the game, and their variety is what sets it out to be a great Puzzle Platformer.

Usually, there isn't a single transformation that solves each puzzle. The catch is in figuring out which combination of transformations are needed, and in exactly how to use them.

Let us explore a couple of transformations; there are 15 in total.

The anvil allows the boy to have a foothold to jump into higher platforms, but it can also squish enemies, as well as serve as platforms to travel on the heads of larger threats. Trampolines and ladders can be used to reach higher ground, but are used in different ways.Then there are the more action focused transformations like the rocket and the hamster ball. Using both changes the game to a higher gear. 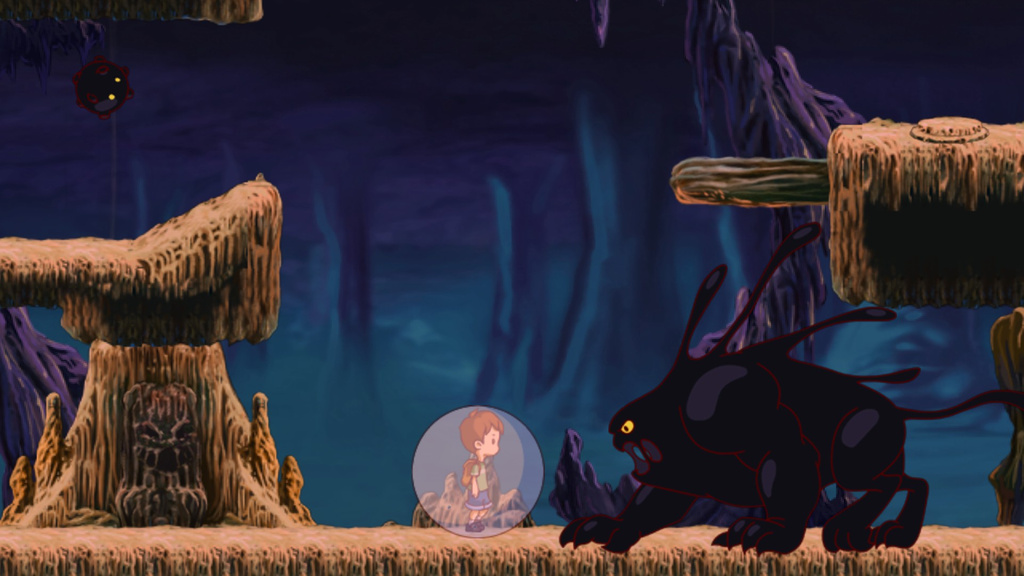 Boss battles can be either fun and challenign, or extremely frusterating and obtuse

The regular game consists of 38 levels, each containing 3 treasure chests. Getting the treasure chests require more puzzle solving than simply finishing the game, and once collecting all three, you open up challenge levels.

Challenge levels are more difficult, and usually focus on one or two transformations only. Also, they are more fun, as they take more risks with the puzzles, and the extra challenge makes finishing them more rewarding.

At the end, the game felt like a slog. Especially since there are simply too many load screens, and they take some time. Once stages become longer, the puzzles seem less fresh, and the originality of the transformations erode.

Rarely do I say so, but this is one game that could have benefited from a cut in the number of stages.

One thing that cannot be discounted about the game, is how great it looks. WayForward are well respected for their 2D art ability, and it certainly shows here.

Not only are the character design cute and endearing, their animation is spot on. The boy's movement are clumsy for instance, exactly how a 6 year old boy would walk. The blob in the other hand is amorphous, yet his transformation all somehow retain the same mass as the original.

There there are the excellent backgrounds, which showcase a level of detail that was not possible before. Even in backgrounds that are rarely used. 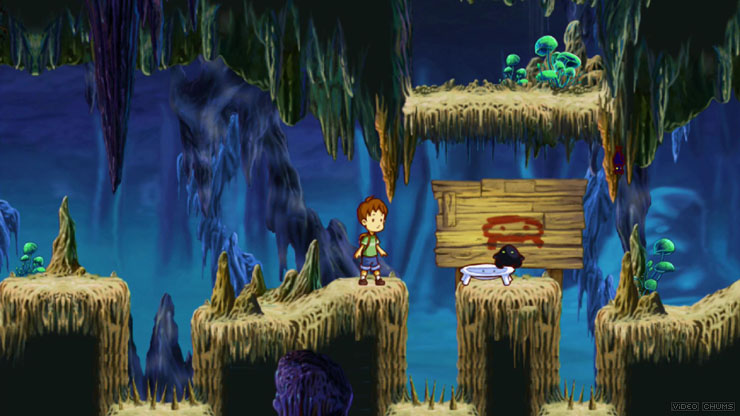 While the same cannot be said of the music, it certainly sounds nice, and it does the job. It is suitably relaxing in the first stages, but escalates in challenge levels, as well as when the boy and his blob travel to more distant locations.

It's easy to criticize A Boy and hid Blob for what it could have done better. There are multiple areas for improvement, especially regarding its narrative (or lack thereof) and how long it felt.

Yet, we cannot ignore the fact that it is more than a competent puzzle platformer. It is a charming game, that manages to be smart at times, as well as true challenge. More often than not, it is fun to play, and that's what matters most. 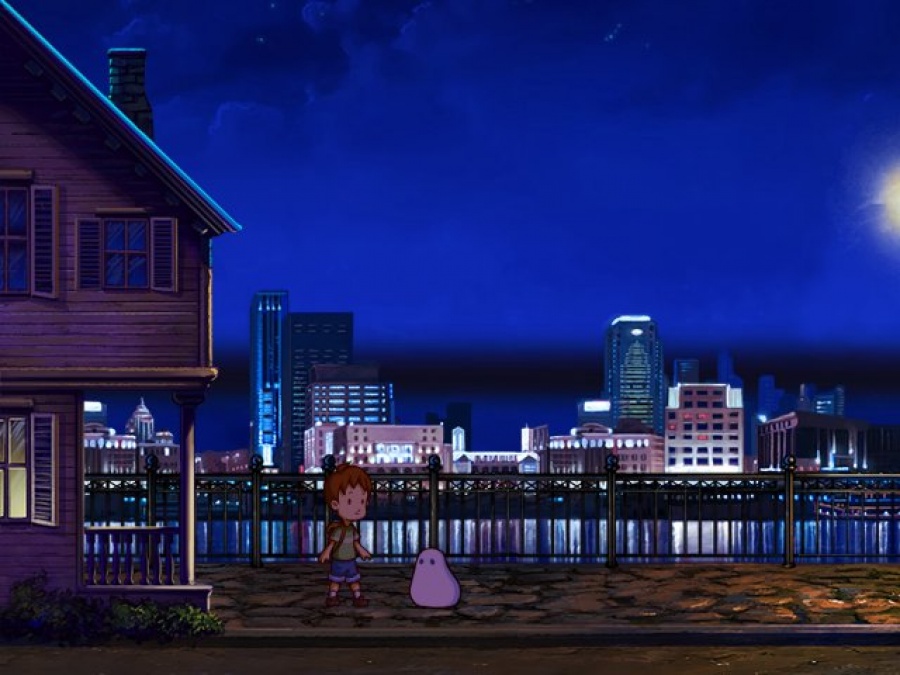 I wish there were more level in the city

For a semi-indie game with small timme publishers and developers, A Boy and his Blob maanged to sell a respectable 210K Units, which is not bad for a 2D puzzle platformer. 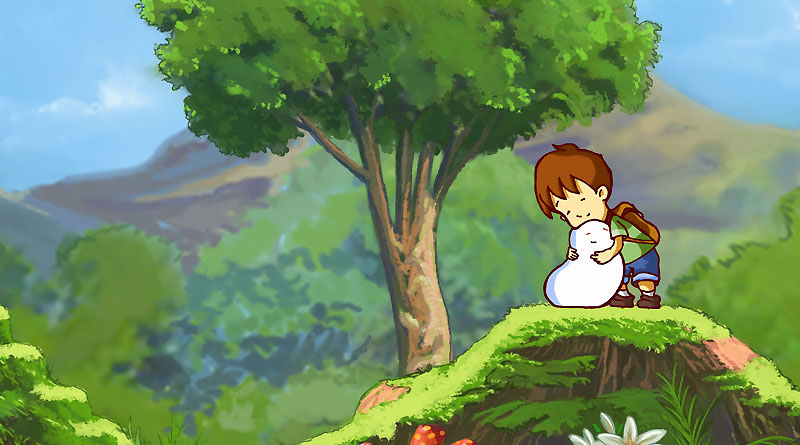 What other game has a dedicated hug button?

1- Spread out your playing to time to avoid fatigue.
2- You won't always need all the transformations given at a stage.
3- Call Blob three times to summon him if he is far away or behind passable obstacles.

In theory, A Boy and His Blob could have been made on any platform. However, it fits right in the Wii's library.

Next game to be reviewed is one I actually missed. At #22, Rhythm Heaven Fever is that crazy Nintendo game with all the crazy Rhythm-based mini-games. This would be my first try at the series, and I don't know exactly what to expect.

No Screenshots for the Wii version