SNES REVIEWS: The Adventures of Batman and Robin

"While the SNES was a constant presence in my childhood, I never had a large collection of games for it. In fact, many of the games I played I still don't know the names of. It wasn't until I say the uproar over Breath of Fire 6 that I knew I played Breath of Fire 1 in the SNES.

I decided to go back and play those 100 games and review them. Well, as I looked closer at the list, I realized that there are many genres that did not age well from the SNES (racing, sports) and many other genres that I am simply not good at (shmups, arcade shooters) and others that I need other players to play against for an accurate representation (fighters). Also, I played many of the more well known games such as Final Fantasy and Super Metroid."

We finished with the legacy reviews, so we are beginning with the reviews after my hiatus. Please feel free to give me advise on my reviews, as I always look for improvement.


Also, here are a number of extra rules for Destructoid:
-If you have any suggestion of a game that is not in the IGN list that I should review, please suggest it.
-Make a bet on each game to check whether Chris Charter played it or not. 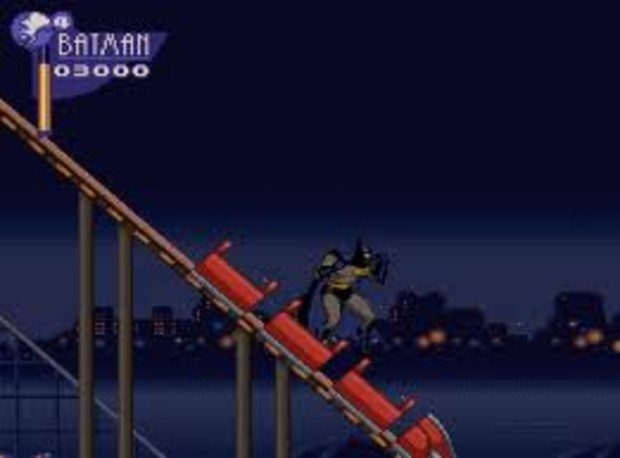 "Riddle me this: What is the best way to end a game?"

Regardless of the answer to Riddle's riddle, it surely was not how this game ends. To put it simply, the final level in the game despite being as different from the rest as other levels are, is a complete bore. In Batman lore, it wouldn't be a spoiler discussing the level as it is a simple Arkham Escape.

All the villains you put to jail in the game now convenient escaped, what ensues is a straightforward boss battle survival run. We fight most of the game's bosses with some few extra's, and then go on to fight the Joker in a final battle more disappointing than Arkham Asylum's final roid-Joker battle.

I can imagine the guys in Konami's decision making session as the following:
Project manager: So, we made a level for each villain, but we put the Joker first, what now?

Employee 1: Let us make an elaborate level where the Batman tries to protect Arkham from another breakout.
PE: Arkham now that's a good idea.
Employee 2: Hey boss, we already put in a lot of work on this already, and its a Batman game, it would sell regardless.
PE: E2 is right, let us just put in all the boring boss battles we already put in.

"I am the night. I am vengeance. I am Rob..(get's bitch slapped by Batman)"

So far, ARAB doesn't look as good as it was in my review as it did while playing it. I think it is because the sheer variety at show is difficult to convey accurately. One way of looking at it, is that each level is made with a different Batman facet in mind.

Levels feature his ruthless attack on crime, as he singularly punches through minion after minion. Other feature his detective skills as he saves the museum from getting robbed. Also, each level emphasizes the specialty of the villain in charge. Naturally, the Penguin would have many minions as well as guns on his side. In contrast, the Riddler uses technology to trap the bat.

The contrast between each level and the rest keeps the game not only fresh, but also easily repayable. Getting to Poison Ivy without being able to harm the environmental fanatics she employs is always fun. True to form, Ivy doesn't fight you herself, but delegates that to a new Vagina Plant Monster she concocted from a Hentai's producer's wet dream.

Finally we come to ABAR's most obvious flaw; it's length. With 8 levels including the majorly disappointing final, Batman can comfortably be beaten in 5 hours or less. The game at the end implores you to finish the game on harder difficulties, but that doesn't add anything extra to the game. Finishing it in hard is the same as finishing it in normal without the added comfort of being able to save the game via passwords.

If, for instance, another play-through introduce Robin as a playable character, or even at least changed the level layout slightly, it might be more inviting to play through it again. Of course, playing the game again would be a blast, and if I was back in the early 1990' playing in my grandfather's couch, I would try and beat it time and time again.

However, this was a 70$ game, and as such we are forced to consider the value of its hours vs. its price. It is a difficult question to answer, but we are left wanting more of the game. Perhaps that in itself is a actually a testament to a good game, that yet didn't manage to fulfill itself completely

First, let me get somethings out of the way. The goons we beat up are the same two guys for every villain that uses them. Apparently, the only sell two shirt colors in goon town (-1). True, you do not feel like the night as you do when in predator mode in the Arkham games (-2) but if anything, you feel more like Batman when moving around with main theme of, well, Batman booming in the background than by doing anything else (+3). I was half ready to go on and wear a scarf over my neck and pretend its a cape. The rest of the music isn't bad as well (+2).

Batman is one of the few comic book characters with a consistent track record in gaming. If weighing his successes against his failures he might be the only one with a scale leaning positively. It can be said that ABAR is one of the heaviest titles in the positive scale. Not to be missed by any fan of the bat in tights.

After Batman's cleansing effect, I am not as worried about the games I missed as I was at first. My next game would be one I never heard anything about, by a studio I am no sure it still exists. Its going to be #93 Super Turrican 2.