With the impending start of the fifth generation of videogame consoles, The 3DO Company wanted to revolutionize the console market with their new 3DO console. Of course, the 3DO Company realized they needed a mascot character to compete with Mario and Sonic, and Crystal Dynamics obliged that need with Gex. A green gecko mascot to rival Sega's blue and Nintendo's red.

It can be surmised that the failure of the 3DO, is then in part, a failure of Gex. Yet, that would be a very unfair conclusion. Even though Gex is as dead a mascot as he can be, his debut was not bad at all.

In fact, it puts him square in the running for best failed mascot of the 90s. 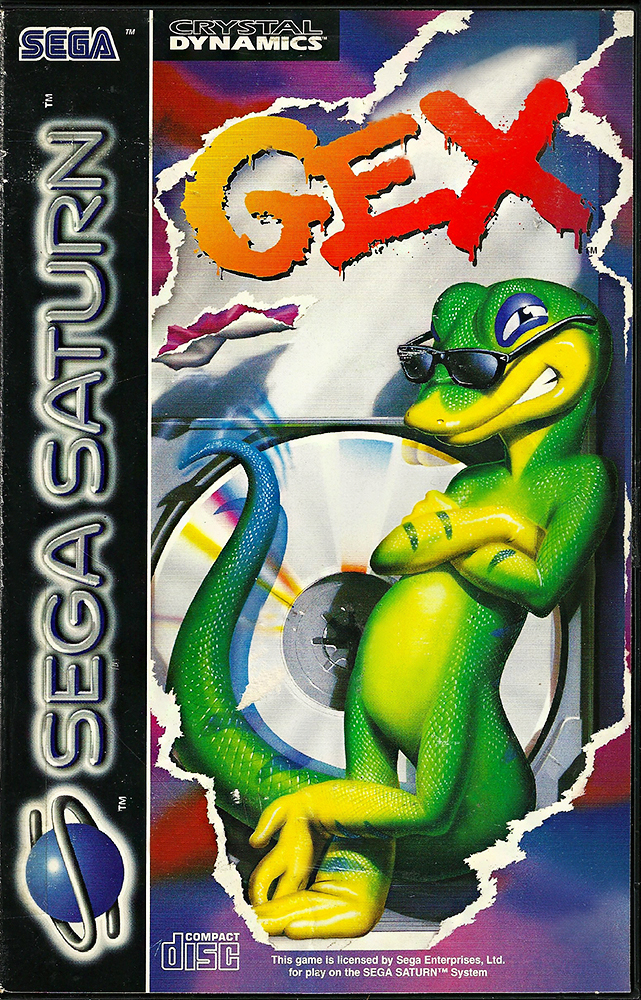 "That's what I call getting some tail"

I could have easily started my review of this game the same way I started my review of Bug!. After all, two of the statements above are entirely correct. However, the difference is that Gex was designed from the ground up to be somehow obnoxious, and that's infinitely better than accidentally becoming so.

Gex is a designed in a quintessentially 90s way, with an attempt at being cool obvious n ever facet of his design. From his sly eyes to the sarcastic one-liners, Gex oozes a specific kind of personality. Unlike other mascots of the time, this gecko is not content on being a silent protagonist. 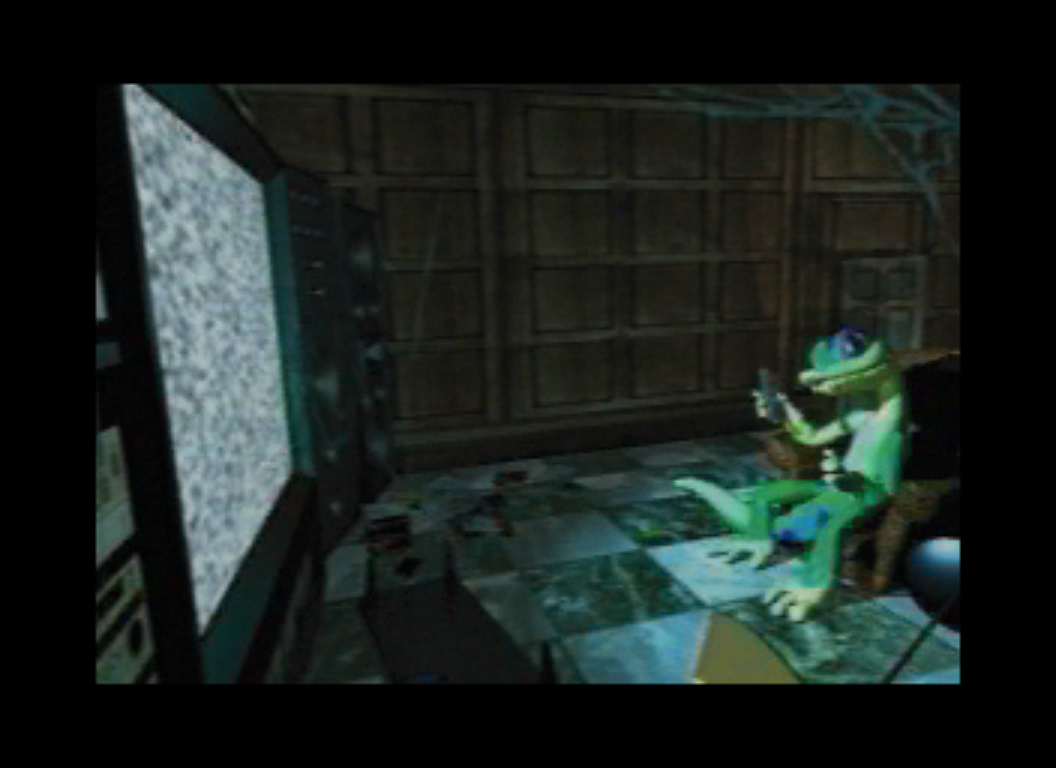 You just know that he won't shut up, also that isn't very good CGI

No, instead, he is going to continue making snarky comments, punchlines, and references. Honestly, a lot of his lines are genuinely funny. Even hearing them for the tenth time, the voice actor does such a good job that it is never grating. And when there is a one-liners author credit at the end, you know some real effort went into writing them.

That is true especially because the rest of the game compliments Gex's character. The game start with the evil "thing" Rez zapping our hero into the TV world. Gex then must travel through TV and pop-culture inspired levels to save himself. Here is where good character design is built, by changing Gex's library of lines depending on the level, the developers actively build-up the character.

It could have been very easy seeing Gex fail as a character. Instead, he manages to succeed, in perhaps the most endurable yet obnoxious way.

"Let's get back to the mystery van"

Unlike the travesty that was most of the early 5th generation 3D platformers, Crystal Dynamics decided to stick to the true and tested 2D platformer to show their mascot. This decisions means that they can take much inspiration from an already proven genre. Yet, it also means that Gex would be compared to excellent platformers like Sonic, Mario and Donkey Kong Country.

Knowing that, Gex offers a new way to traverse his levels; utilizing his unique lizard traits to clib up the walls. He can attach himself to nearly ever surface in the game, and in some cases the background itself. This added a different layer to a typical 2D game, with an ability to navigate the 2D realm in different ways.

Other than his climbing abilities, Gex can use his tail to bash enemies as well as get a variety of useful power ups. Other than the customary invisibility power up, there are also three offensive power ups that add some serious "fire" power to Gex's breath. 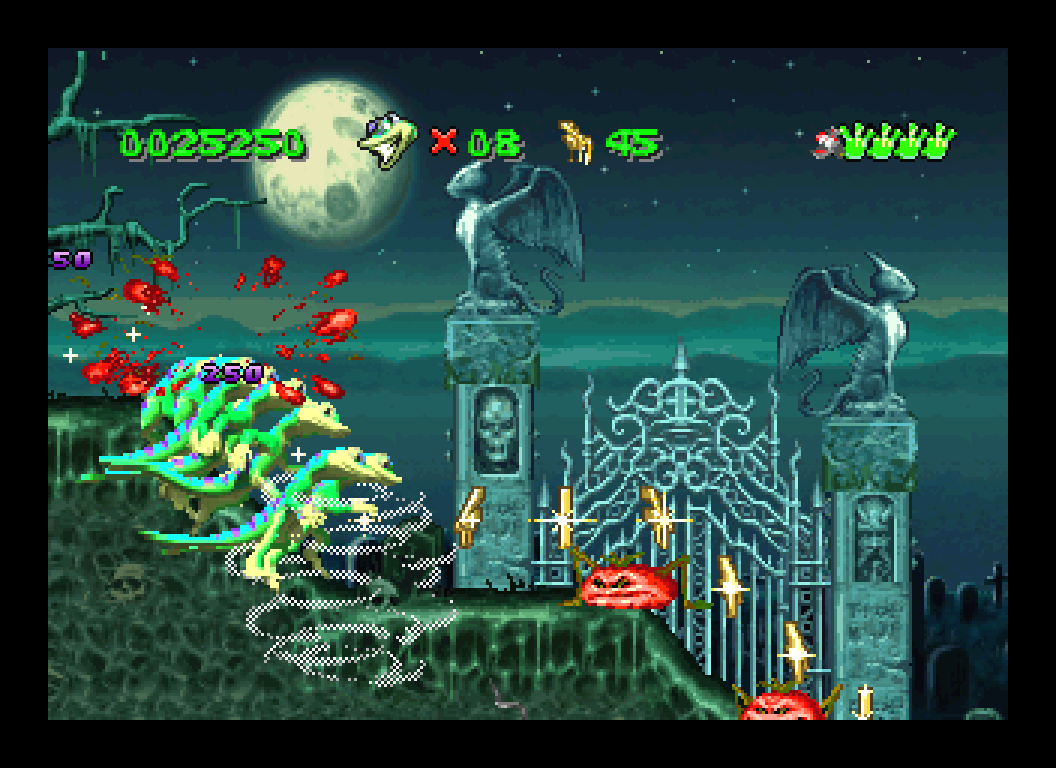 However, there is something lacking in the characters movement. Everything feels a little bit clunkier and slower that it should be. One thing the game doesn't take from other platformers is the ability to jump on enemies; Gex must always wack them instead. That robs him from a serious momentum boost.

Otherwise, the game is rarely challenging, with only the final set of levels providing any modicum of difficulty. In some way, I understand the lack of challenge. The game is not fast and precise enough, so adding in some platforming difficulties would probably only serve to make it more frustrating than fun.

To showcase his abilities, Gex goes to some 18 or so levels and some bosses. Generally, the levels follow the Sonic formula of labyrinthine levels rather the more focused Nintendo style. Except, where Sonic's mechanics invite the player to try and master them in a variety of paths, Gex is never that kind of game.

As such, the longer levels do not feel like adding in value as much as stretching out content. They are not boring in any way, but they are dangerously close to being so. 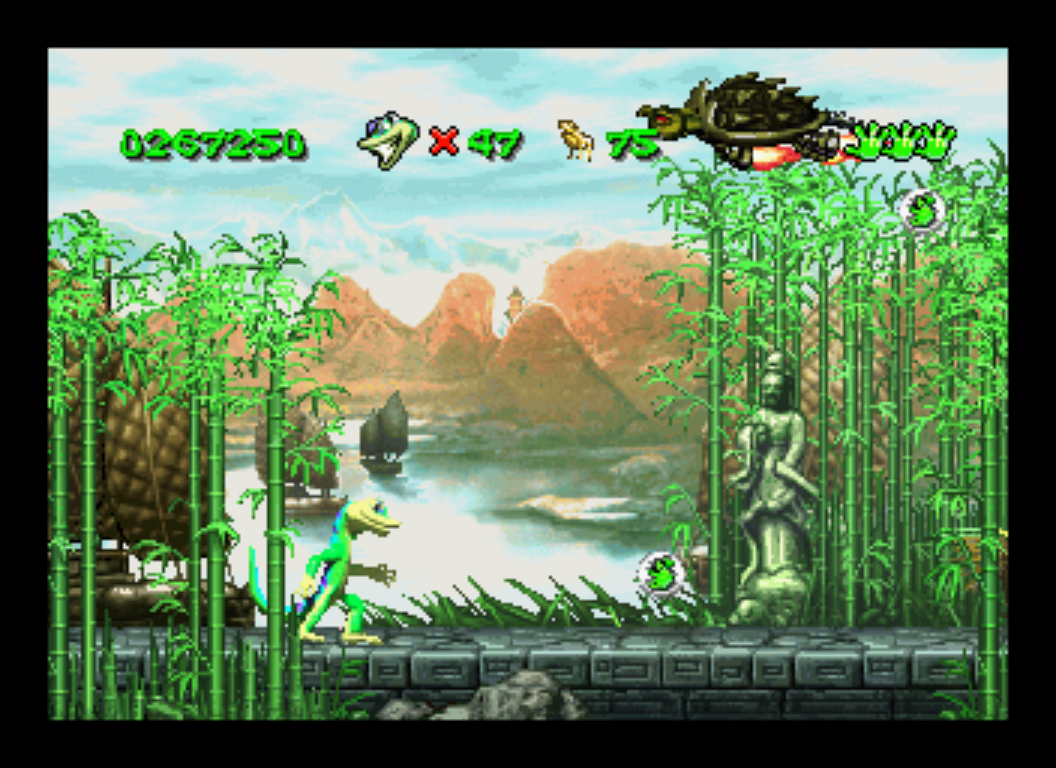 The bosses are never boring though

It is only when the levels really are built around an idea that they shine. One example is maze-like level with doors changing the time from day to night. Another good example is a level that utilizes Gex's abilities well by having a conveyor belt both in the roof and the floor.

In the other hand, the bosses are in no way repetitive, with each having a unique and satisfying fight. Not easy fights, but fights that are fair and take just the right amount of time. That is excepting the final boss though, which deserves is a frustrating test of patience.

I already mentioned that Crystal Dynamics were very smart to stick with 2D gameplay with their Mascot introduction. Experience in the 3D realm and with polygon graphics have yet to be properly built, and consumers would be turned off by an ugly polygonal mess.

Instead, Gex opts to be one damn fine looking 2D platformer.

Let's get Gex himself out of the way though. While he doesn't look in any way bad, there is some clashing against the rest of the environment, almost as if he is juxtaposed against it. It is jarring at first, but you quickly get used to it.

Other than that, the environments look good, and the character design is uniformly great. In each of the game's five worlds, it offers different characters that fit really well with the theme. Especially in the Chinatown world, which looks like an excellent place for Joe Musashi to be in. A special mention should be made for the level's backgrounds, which are simply great to look at. 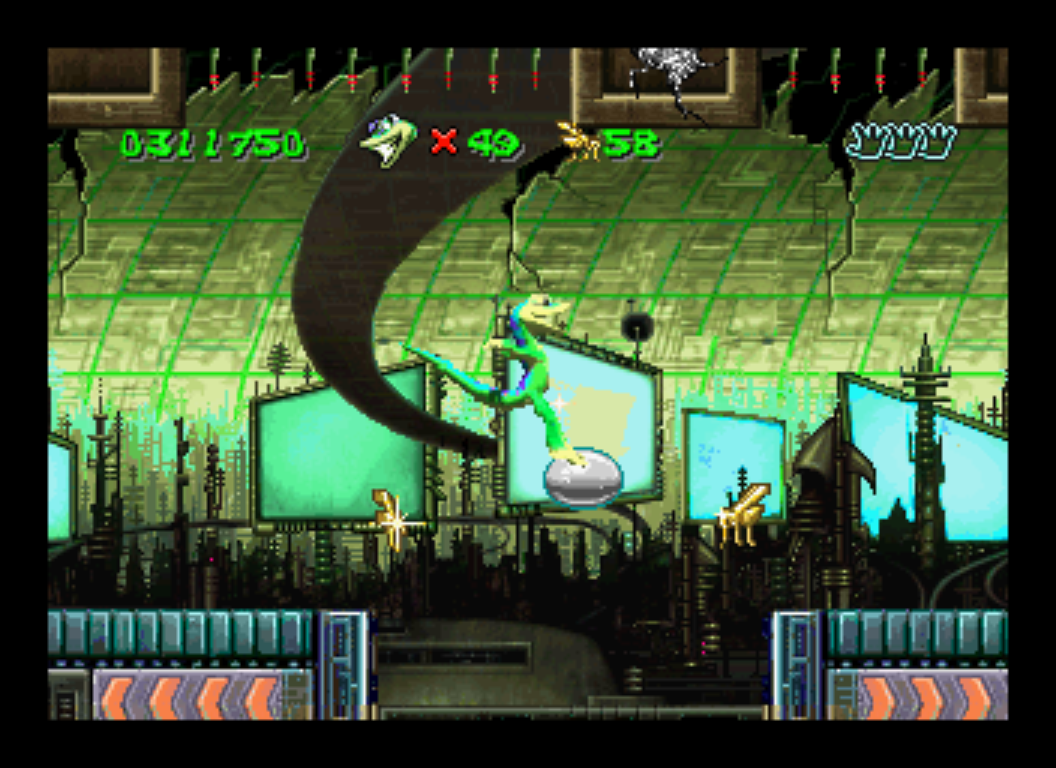 2D art have aged really well. The same cannot be said of the FMV scenes though, which may have been impressive at the time but only serve to remind you of how old you are today.

As for the music, it is somewhat limited in the number of its tracks, but is generally of really good quality. Of course, in saying it is of generally really good quality, I am emphatically excluding the terrible credit song. One of the best songs is the Kungfu Ville stage song, which uses the Asian influence quite well while also having some energetic beats to it.

Finally, the voice acting for Gex is quite good. With the amount of lines he says, my impression of the game may have been very different if that wasn't the case.

Gex is an obnoxious character, and that's why he works.

He is the quintessential forgotten 90s mascot, full with quips and cool, so much that he has no other decade to go to. The 2000s wouldn't accept him, nor would he work out today.

The 3DO failed, and while Gex survived its failure for sometime, he eventually disappeared. At least no one can take his debut away from him, nor the distinction of being the best sold game on the 3DO. 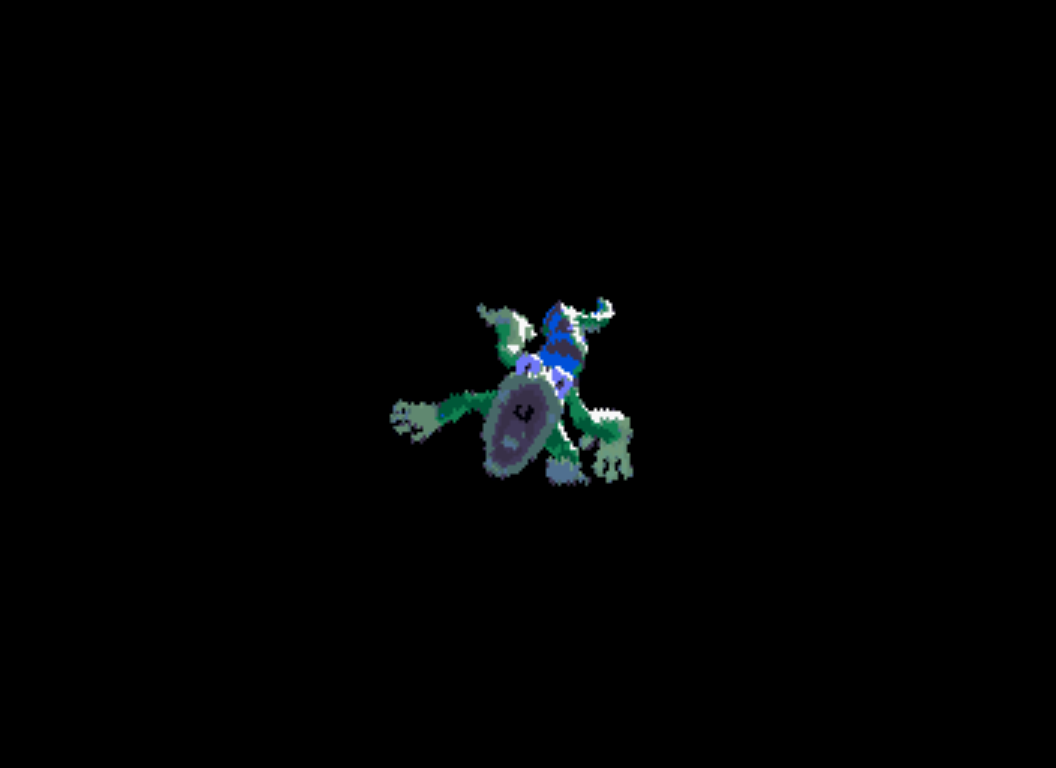 The game doesn't fall flat on its face this time

1- If you get hit you lose the powerup.
2- You can attack while you are attached to the walls.
3- The remotes you need to get are never hidden out of your way.
4- Extra paths don't have anything more useful than extra lives or powerups. 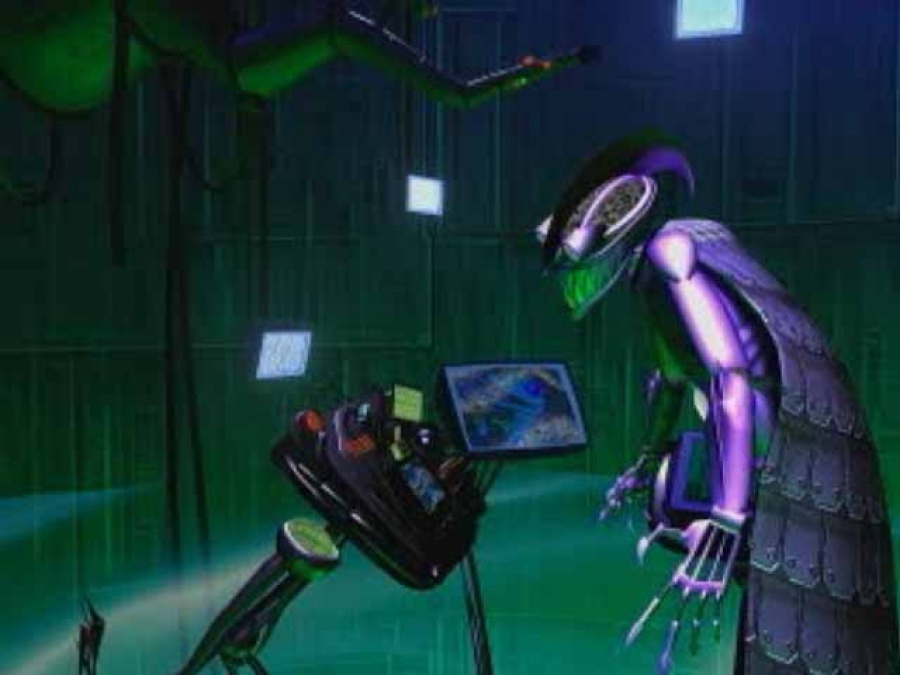 Then again, the game could have easily bee a disaster if it took a page fro Bug

So, it is great the next game in the list is not as terrible as freaking Bug!, even it its not exactly a great game. If anything, it is a solid 2D platformer that successfully launched the career of on gecko character.

Next game in the list is another Crystal Dynamic game; Pandemonium which sit at #93. It's another 2D platformer, but it utilizes a 2.5D perspective.