Released relatively late in the PS1 life cycle, Dragon Dogma was touted as an Action RPG with some relatively decent graphics and combat. I don't know if that genre classification is what caused it, but the game was considered to be a mediocre ARPG and did not have a good reputation.

However, I think if people stopped to consider what is the actual genre of the game, they may not have been disappointing at what it is not. Simply put, Dragon Valor is no more an RPG than Guardian Heroes on the Saturn was.

This is a Hack 'n' Slash game with some minor RPG elements, and it was a good game at the time, but it is not worth it much today. 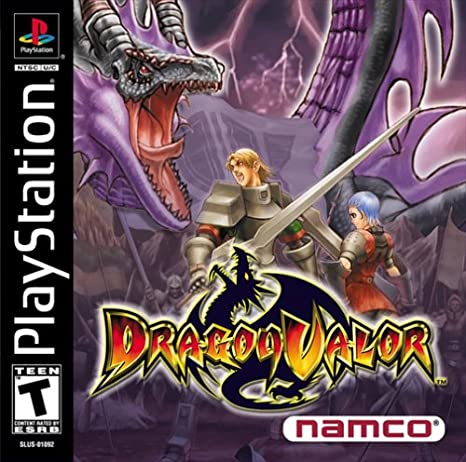 "The Dragon is still alive?! Then I will chase it till the end of the earth and destroy it"

The story immediately begins with a quest for vengeance, as the main character's village is burnt and his sister dies by the action of an evil dragon. Almost immediately, the character is handed a magical sword and becomes the "Dragon Valor", a hero who is destined to fight dragons.

Although there is a background to this conflict, it is rarely interesting enough to care about, and major elements of the story are explained in scrolling Star Wars text. That's not to say that story takes a backseat to the gameplay. Nearly every level begins and ends with a story sequence. 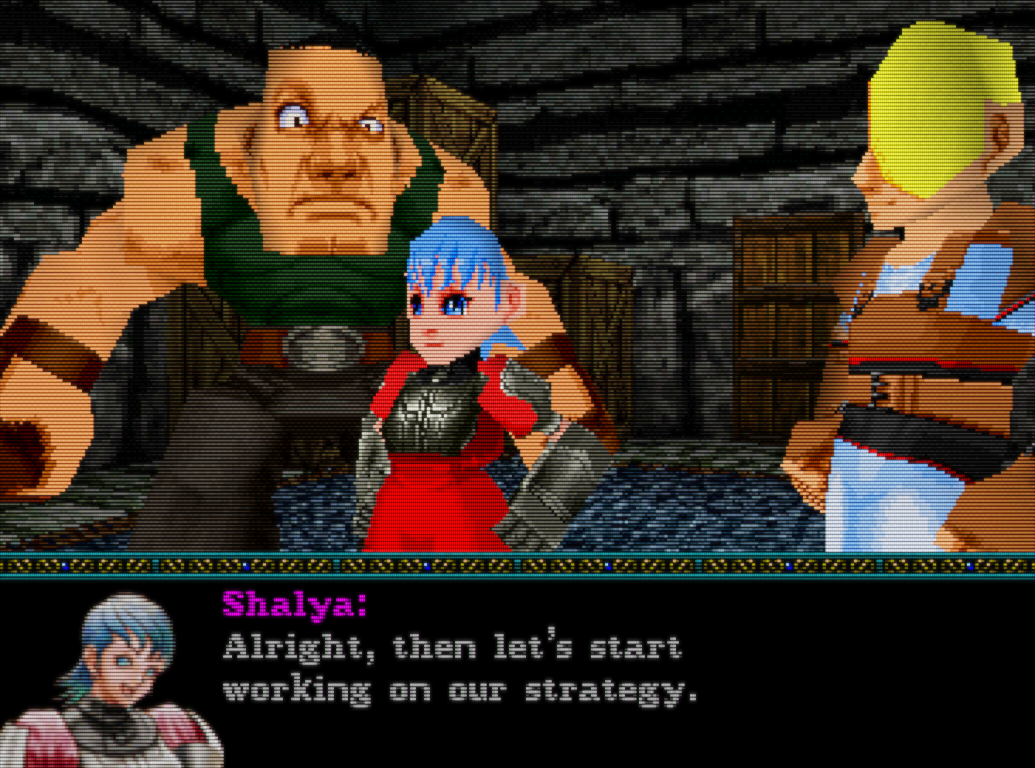 Some character designs are way over the top

However, there is no real depth or weight to the story. You can't interact with characters outside of these "cut-scenes", and it is difficult to care about any of them.

The game's main narrative innovation is that you control a different character in each chapter as the Dragon Valor title (and sword) gets inherited through each generation. There are also two choices in the game that branches out the story into three different paths.

Unfortunately, this inheritance mechanic means you get even less attached to your characters as you resolve a different micro-story in each chapter. Sure, there are a lot of cool moments, but the overall narrative is a bit weak despite the multiple endings.

"Oh, the pain! The agony! So this is what it feels to be alive!"

Mechanically, the game is a simple Hack 'n" Slash but with magic abilities added on top. Most levels consist of rooms where you need to defeat all enemies (who come in very limited varieties), and then you are done.

Some levels are more elaborate, having simple platforming added on top or needing you to backtrack once you get a key. Mostly, the gist of the game-play is in the combat, which doesn't change much across any of the characters.

You move in 3D space, but most encounters are presented in a linear 2D plane (except bosses, but more on that later). You have access to a basic combo attack, as well as some other genre staple moves (dashing thrust, jumping slash, downward thrust).

Magic is introduced to shake things up, and it is mostly useful, making short work of some mobs while supporting you against tougher enemies. As you advance through the game, your magic gets stronger. 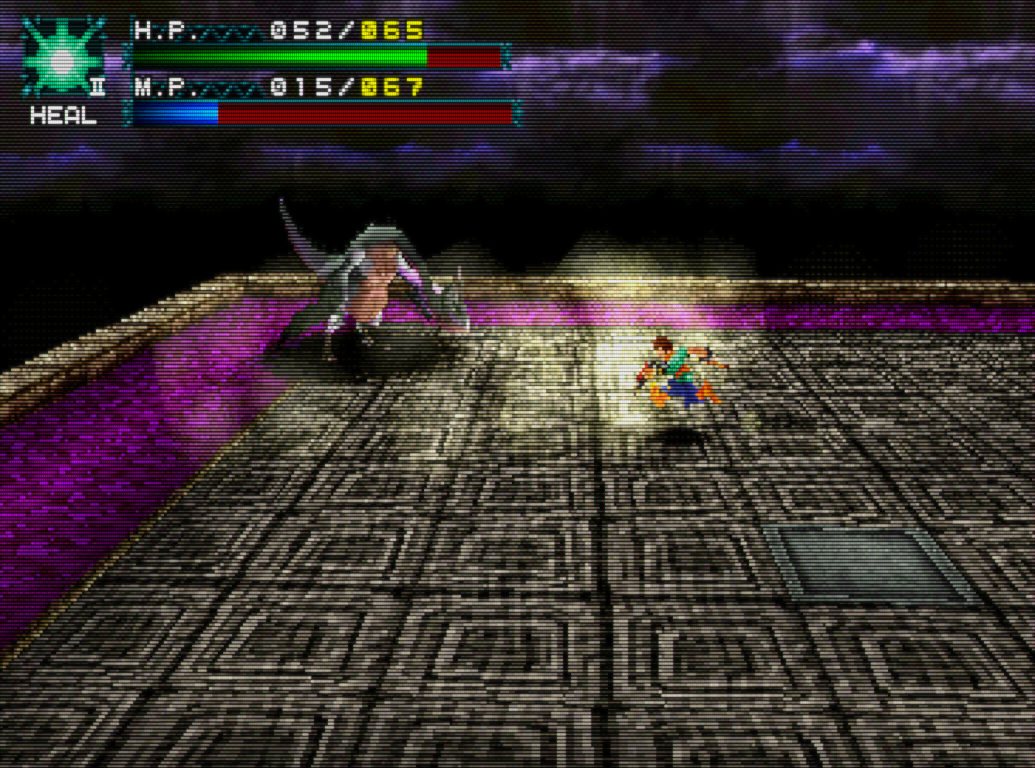 As expected, the boss battles are the best part of the game

Initially, I thought my character would be upgraded regularly, and I may even have the ability to buy equipment as well. However, it turns out that shops only appear at fixed moments (selling a fixed inventory), and that most of my character upgrades are reset when the chapter ends.

Only limited equipment and magic scrolls get inherited to the next character, and that makes the game feel more repetitive than it already is.

For one thing, bosses, who may be the combat highlight of the game, feel stunted because they cannot be designed well for a stronger character when the stats are reset every chapter.

This is why this game cannot be considered an ARPG, since there is no real RPG growth in the player's character. Instead, like in any modern Hack 'n' Slash, your character is augmented in a fixed way as your real growth becomes your skill as a player.

"Aren't I a fearsome sight!? Surrender, and I'll let you live as one of my henchmen"

Due to its release at the end of the PS1's lifecycle, it is not surprising to see that Dragon Valor has some admittedly good graphics. It's nothing groundbreaking (or even pleasant to look at), but the polygonal graphics in the game are not painful to look at.

Sure, the characters may not look anything like their gorgeous portraits may suggest, but they look close enough for you to imagine the better-looking version. This is the same with some of the game's more impressive dragon bosses.

Hell, even the opening cut-scene was some cutting edge stuff. 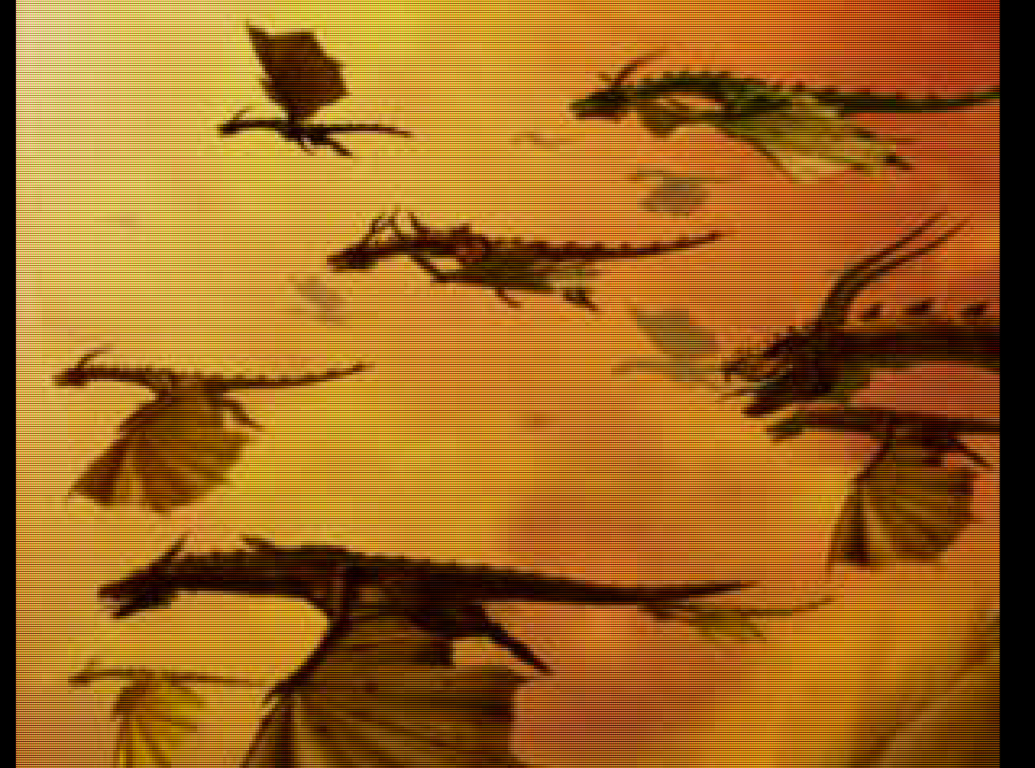 Yet, there is a minor annoyance in the game's graphical department that develops into a significant grievance. In all of the game, when you enter a new screen, or during some key action sequences in a cut-scene, the game uses a motion-blurring technique to emphasize a dramatic point. However, all it does is give me motion sickness and hurts my eyes.

Thankfully, the game's music does nothing to hurt my ears. It is actually quite a good soundtrack that fits the genre. However, there is a limited number of tracks that repeat several times, keeping it from being anything special.

Also, something to be thankful for is the lack of cringe voice acting, which could have been a real possibility with a Namco game.

I think Dragon Valor was a fine game at its time. In fact, its graphics meant it should have been seen as a cutting-edge Hack 'n' Slash game. Yet, the perception that it should be an ARPR has hurt it in my opinion, as it primed people to expect something that it wasn't designed to give.

That being said, the repetitive nature of the game and its lack of a core selling point means there is little reason to play the game today. 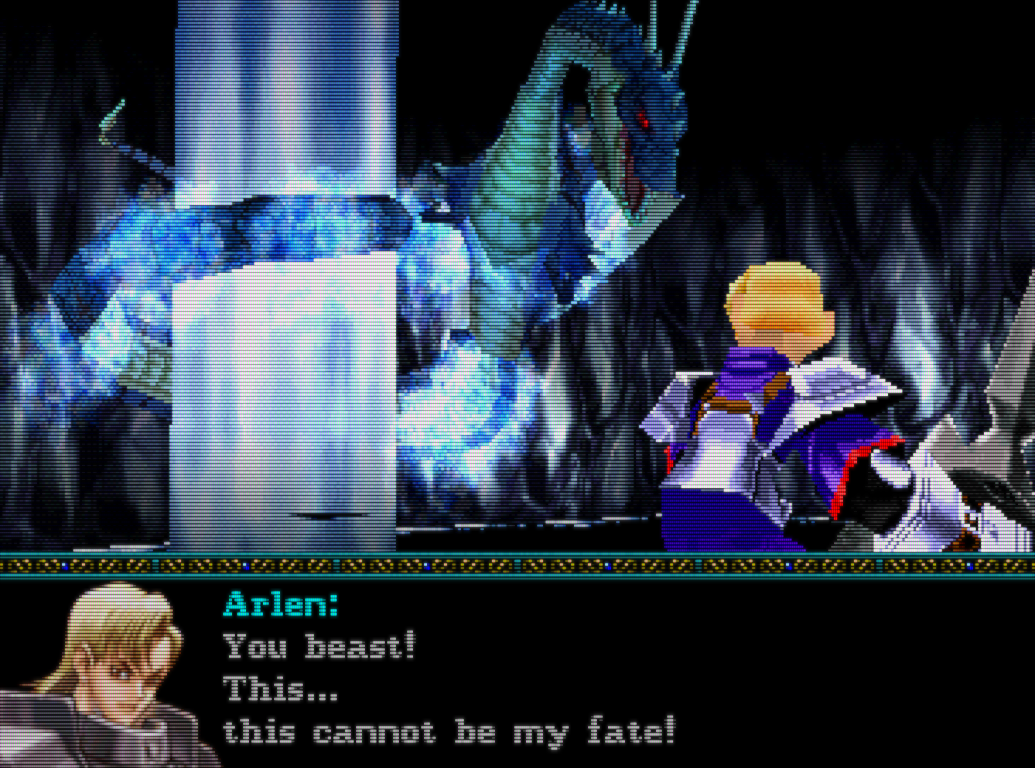 1-Always backtrack at the start of a level in case there are some items to take.
2-At shops, prioritize buying permanent upgrades that can be inherited instead of bigger temporary boosts.
3-Magic is very useful, learn what works in each situation.
4-Defeating enemies with magic may drop an MP extension item.
5-The main choices affecting the game's paths is the decision to open or not open a door in Chapters 1 and 2. 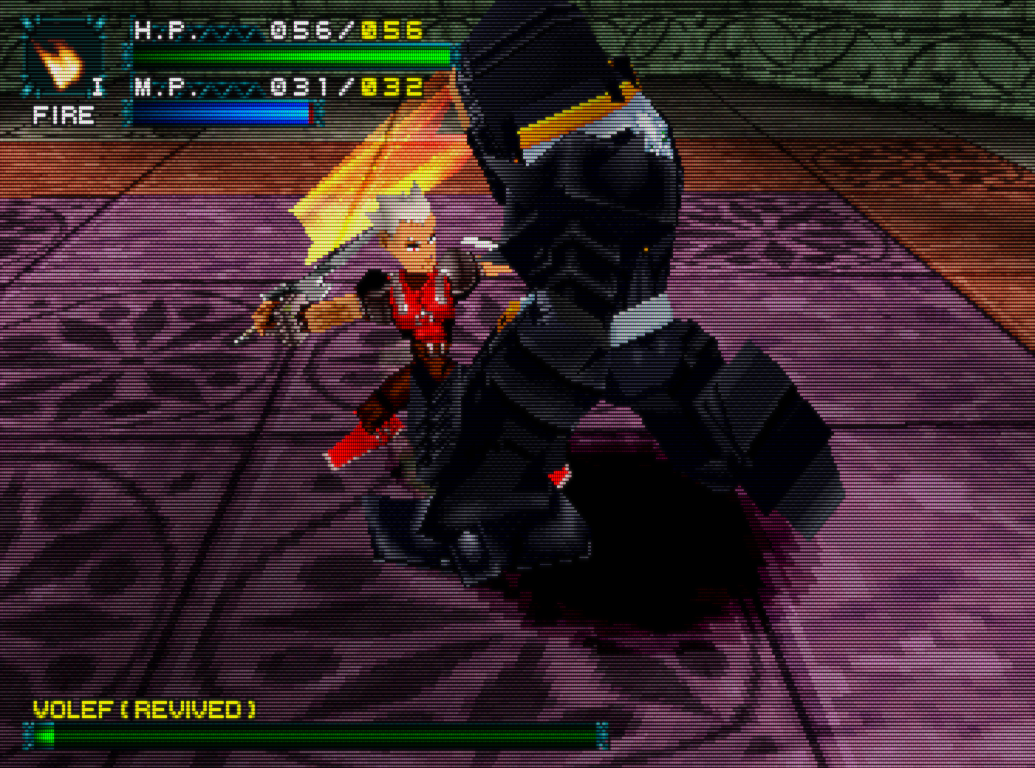 Again, I need to reiterate that the graphics are better in motion 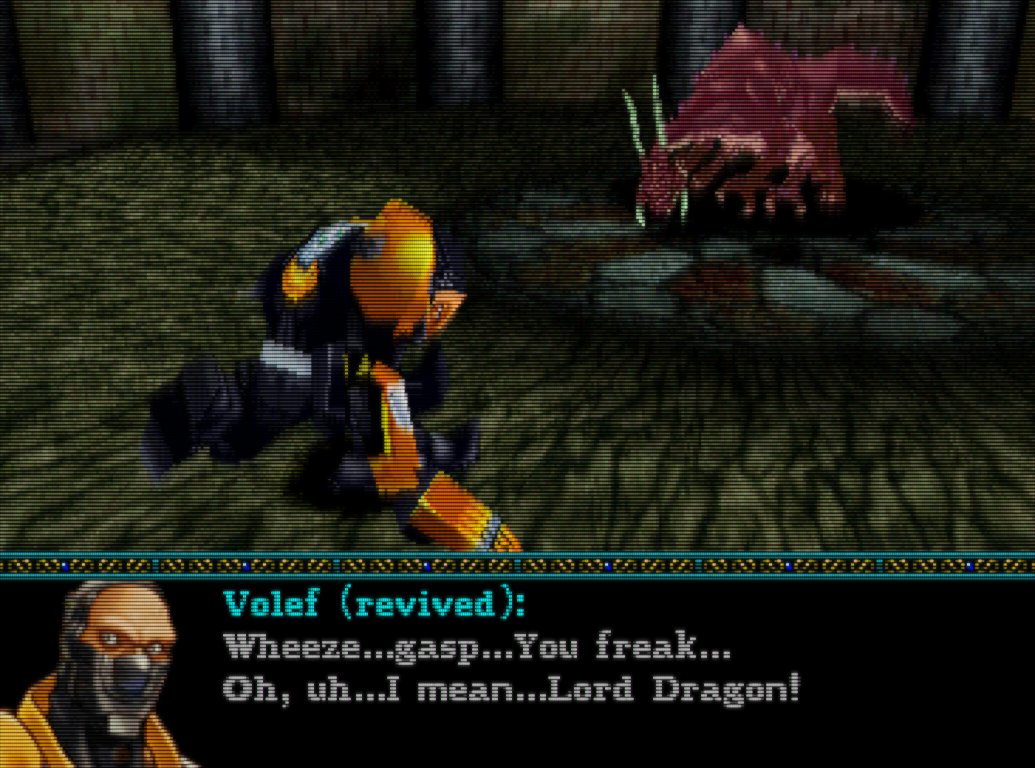 Halfway through the game, I remembered that I actually beat Dragon Valor on the PS1 nearly two decades earlier. In a way, that encapsulates the game perfectly, fun to play and beat, but not memorable in any way.

The next game in the list is something fans of the game would never forget. After all, Carnage Heart has some extremely unique programming-based gameplay that I am hoping I can enjoy.