For those reading one of my Genesis review blogs for the first time, here is the basic concept:

I already reviewed a bunch of SNES games, so its natural that I am going to review the games of its prime competition. Does the SEGA Genesis stand a chance against the legendary SNES library?

Originally, I post most of my stuff in a football forum"Goallegacy" which is the first online community I have ever joined. Which is the best place for a football fan (the REAL football, not handegg) to hang out in the internet. 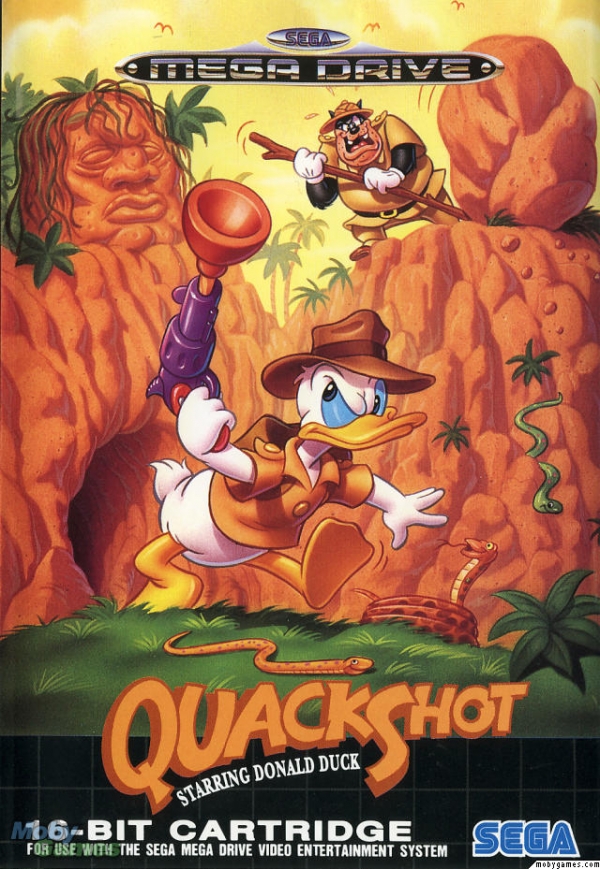 The first thing I thought when I started playing QuackShot, a game starring Donald Duck and using the same title font as Ducktales, is whether the game will actually be as good as the NES Ducktales game.

It turned out that QuackShot could have been better, but it unfortunately lacked the ambition to be anything more than a technically good licensed platformer.

"Just before he died, King Garuzia hid his most prized possession in a secret location"

To set the game up, QuackShot begins with a few opening screens explaining how Donald found a treasure map in Uncle Scrooge's study, and decided to go find it himself. This set up works, because it it feels exactly like what Donald Duck would do, and as such he put himself in trouble along with his three nephews.

Until near the end, the titular character and his three nephews never interact, wasting an opportunity at trying (even if its going to fail) at any world building or just plain joking around. 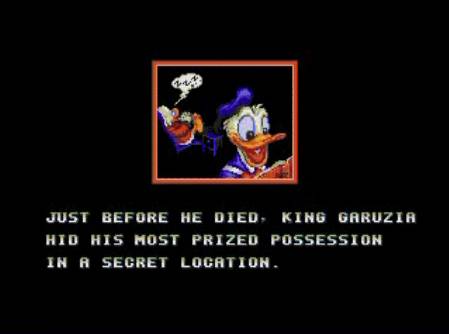 Uncle Scrooge would be glad he snoozed through this adventure

I don't understand why a game that invested much on the license, then invested more on the design and animation of these characters, then proceeded to do nothing interesting with it beyond an initial set up. Compare that to the NES game, where in a weaker hardware Ducktales actually had dialogue with the three nephews and that pelican pilot.

Ultimately, beyond the rare use of Donald's rage super move, and a number character sprites, the game could have starred Daffy Duck and it wouldn't show a difference.

"Don't worry about us Uncle Donald, you don't need to give Pete the map"

Under the fact that this is just a licensed platformer is the realization that there is a very solid foundation to the game. QuackShot actually attempts to progress as Metroidvania game, but through multiple stages instead on one connected map.

Each stage is a linear affair, but sometimes you will need to visit other stages to get items and equipment that help you go forward. This means you can choose which stage to approach first, but you will need to quit at the middle of it and travel someplace else to get an item. It enhances the adventure feeling of the game, especially since you don't actually repeat any stage from the start. 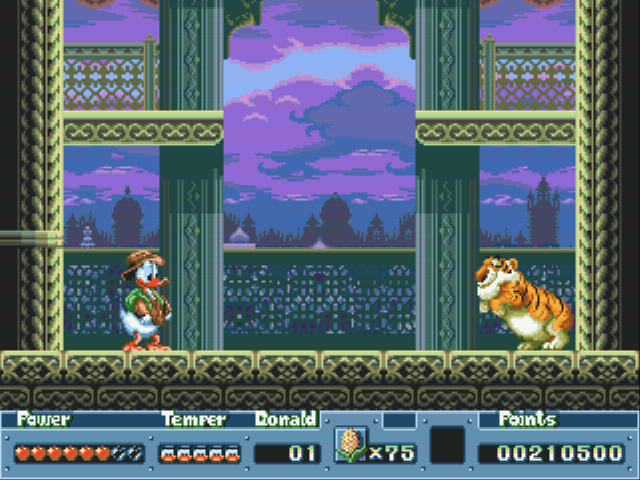 Shere Khan really let himself go before this game

Unfortunately, while this could have made for an adventerous game, the easy difficulty and short length of QuackShot makes this just a What If case. What if QuackShot actually had more stages and more depth and difficulty to its game?

Instead, we realize that we can finish this game in under three hours without dying once. Donald Duck can just waltz around with very little threat to his duck life. It makes it easier for him that in his actual comics, where everything from Bananas to Pot plants are out to get him.

"Donald and his nephews took off in their plane, leaving a furious Daisy behind"

As is usual with licensed games, the production value for QuackShot is great. Immediately, the smooth design of Donald's sprite and its crisp animation would impress you in comparison to other Genesis games.

By using larger sprites, the design team were able to put in a lot of character into their drawings by adding in more details and focusing on the animations. Even the idle animation of Donald has been given much care. Enemy sprites are not as interesting, owing to the fact the game doesn't use the license much, but they are still well detailed and animated. 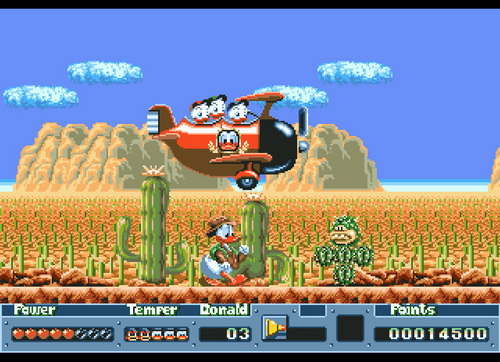 In the background, the level graphics are good, especially the far drawings. In some levels, we see more advanced effects, such as water waves in the foreground.

Musically, its not as impressive as its graphics, but it has varied and fun tunes. Nothing stands out much, but it all adds to the presentation of the game.

Ducktales in the NES had a lot of ambition behind it, and as such it managed to become a classic. In many ways, QuackShot could have been the Ducktales of the Genesis, but it simply did not have the depth, and I would argue, the inclination to be more than a licensed game.

As a result, we have a good looking game that could have been much better than it ended up being.

1- If you travel from stage to stage, you get a fixed health.
2- Just travel around and don't worry about the order, there is a mid point that you can go back to in each stage.

I hate to give a Donald Duck game such a score, but I was disappointed at something that should have been better. This could have easily been the successor of Ducktales.

Next game in the review series is going to be Castlevania: Bloodlines, at #38. This was reportedly not as good as Super Castlevania (which I really liked), but a solid game nonetheless.