Although one of the first games unveiled for the Saturn, Magic Knight Rayearth was actually the last official game released in North America. That was due to the extensive localization needed for a game that pushed the narrative boundaries of the time.

Based on a well-known magical girl anime, this is actually an adaptation that successfully tells a story while being a good game in its own right. The rare anime adaptation that works. 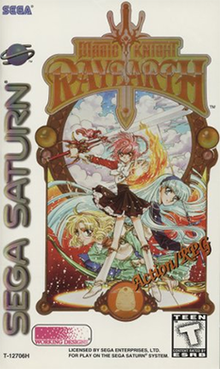 "This land, this place. The dark tide must be quelled. I must call them"

Heavily based on the anime of the same name, the plot of the game will be very familiar to fans of the show, even if there are some notable changes to the plot. Namely the fact that it skips the second part of the anime and combines the entire story in one arc.

For the non-fans, the story is a familiar Magical Girl Anime trope. Three Tokyo teenaged girls are summoned to the endangered world of Cephiro, where they need to fulfill their destiny of becoming Magical Knights and rescuing the princess Emerald. Emerald's disappearance is throwing the world of Cephiro into chaos, and the many locales of the place are in danger because of that.

The three girls, Hikaru, Umi, and Fuu, all represent well-worn anime archetypes. From the feisty red leader, Hikaru, to the geeky eye-glass wearing Fuu. Their development into the Magic Knights, which requires them to grow with the plot, is the major theme of the game. 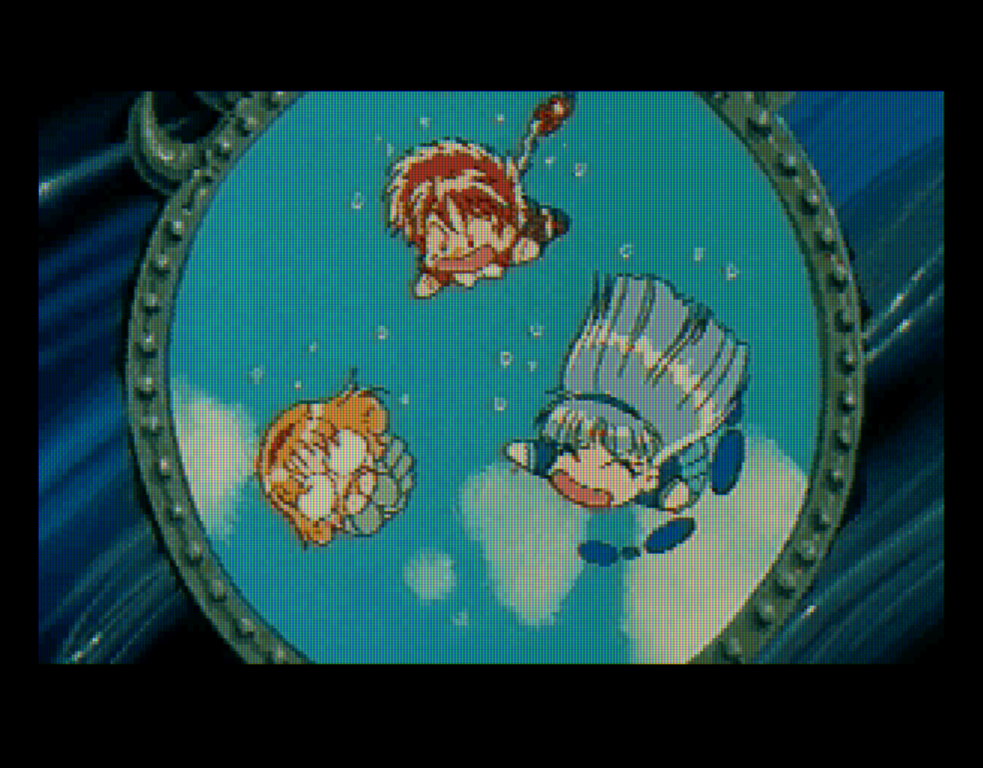 But are they ready to save the world

Trying to stop them is the evil wizard Zagat and his band of hapless minions, who, to the story's credit, do get fleshed out more than expected. Even if the exposition is a bit forced sometimes.

The plot unravels through character dialogue, which is voice acted in the important scenes. Also, there is a big number of anime cut scenes that do not gracefully follow the action. In fact, I would say the anime cut scenes are more a distraction than an asset.

Surprisingly, the majority of dialogue and character interactions were really good. In fact, there are many times where NPCs would say something funny in a meta-level, but the important bits of dialogue and exposition are also mostly well-done. Of course, there is the occasional cliched scene or two, where the otherwise decent VA creeks under poorly written lines and unnatural developments.

"Hmph! It appears that the Magic Knights have been summoned from beyond the barrier"

In order to develop their powers, the three girls must grow and find their inner strength, and they do that by helping the various communities of Cephiro. That's basically the driving force behind the Action Adventure gameplay.

Similar to the Legen of Zelda the game is a top-down action adventure. Each of the three characters has their own attack style and spells, and you can freely switch between them. While some may call it an Action RPG, the progression is more like Zelda compared to anything else. 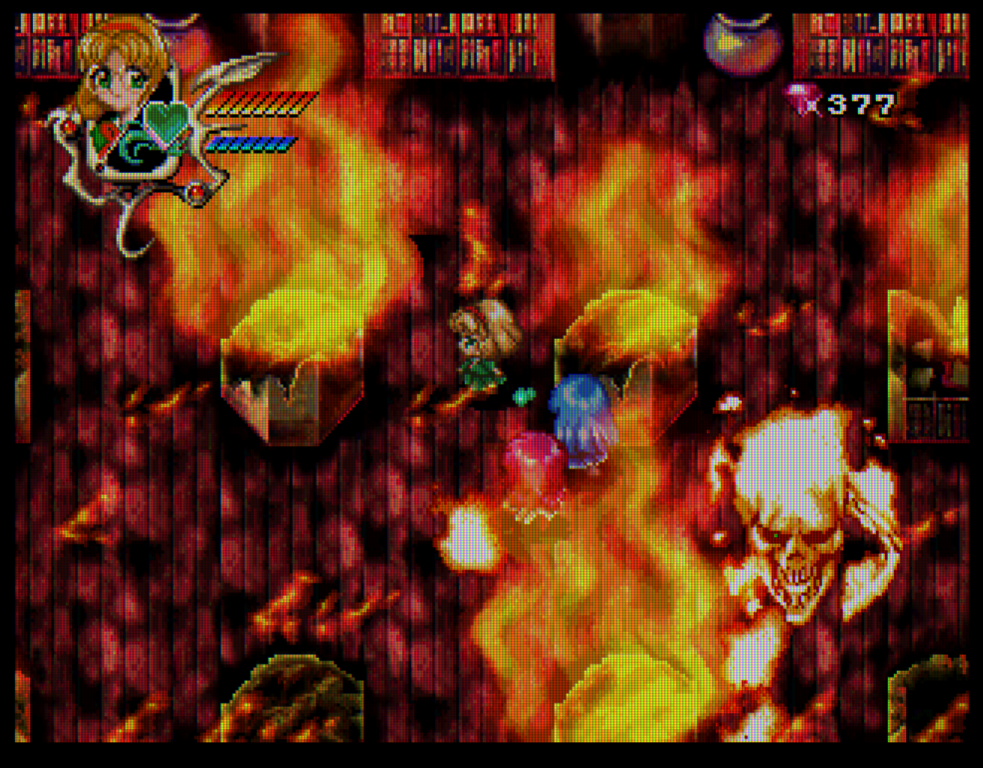 Someone call the fire department, there are three trapped girls in the building

Each location has its own dungeon or two, and these are mostly straightforward affairs with simple puzzles. I imagine a better version of this game would have had character-specific abilities to solve some smart puzzles.

Except, the limited challenge of the game is mostly based on the combat. Yet, with the combined strength of the three girls, especially with Fuu's homing charged arrows, the game is rarely hard even against the exciting bosses.

"Alcione... The time is come for a little child abuse"

You shouldn't look at the game's lack of challenge as a serious negative though. While it is true that the gameplay doesn't reach its full potential because of that, the core game is still enjoyable enough despite its relative simplicity.

That's probably due to an always forward-momentum that help you breeze through the game without feeling bogged down at any one moment. Since the story and characters are nice enough, each new location or dungeon is an exciting new thing to quickly overcome and go forward again. 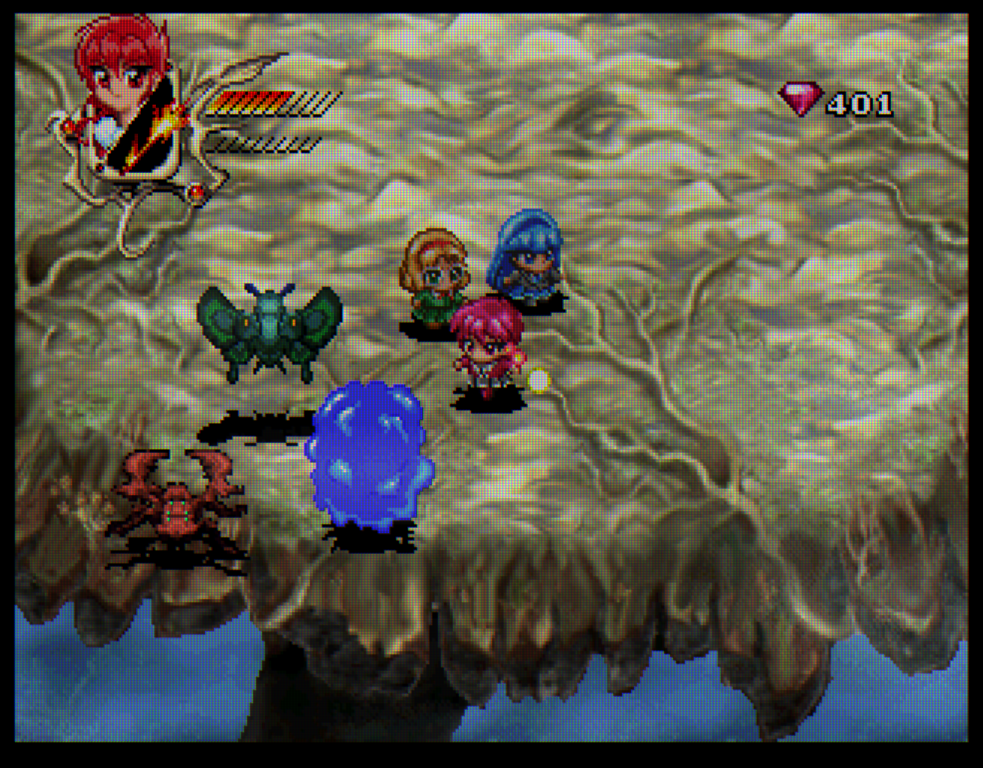 Some boss battles are really good

One activity that requires some backtracking is in collecting some of the 64 Rainbow amulets, which is a side activity that offers some exploration incentive without being necessary.

In the other hand, if you don't like difficult Action Adventure games, then this game is right up your alley, with a gentle difficulty and learning curve all the way through to the end.

"Ya know, in my day we didn't have bloomin' video games to rot our minds! We played with rocks and sticks and mud all day, and we LIKED it! We LOVED it!"

One of the many sticking points against the game, when it was originally released, is that it didn't go far from the graphics and presentation of the 16bit era. When games like Bug! and Blazing Heroes were released with polygonal models, Magic Knight Rayearth was simply an upscaled 16bit game.

That is exactly why this game looks great when most early games (And even later) of the Saturn have aged terribly.

The sprites look really good against a crisp and detailed environment. Character portraits are nice-looking an expressive, and their emotions are conveyed in cute little touches in the animations, touches you see in many an anime.

While this level of care doesn't always include the enemy monster models (except the bosses), the game's graphics are consistently good and are a reminder of why 2D game style never went out of fashion. 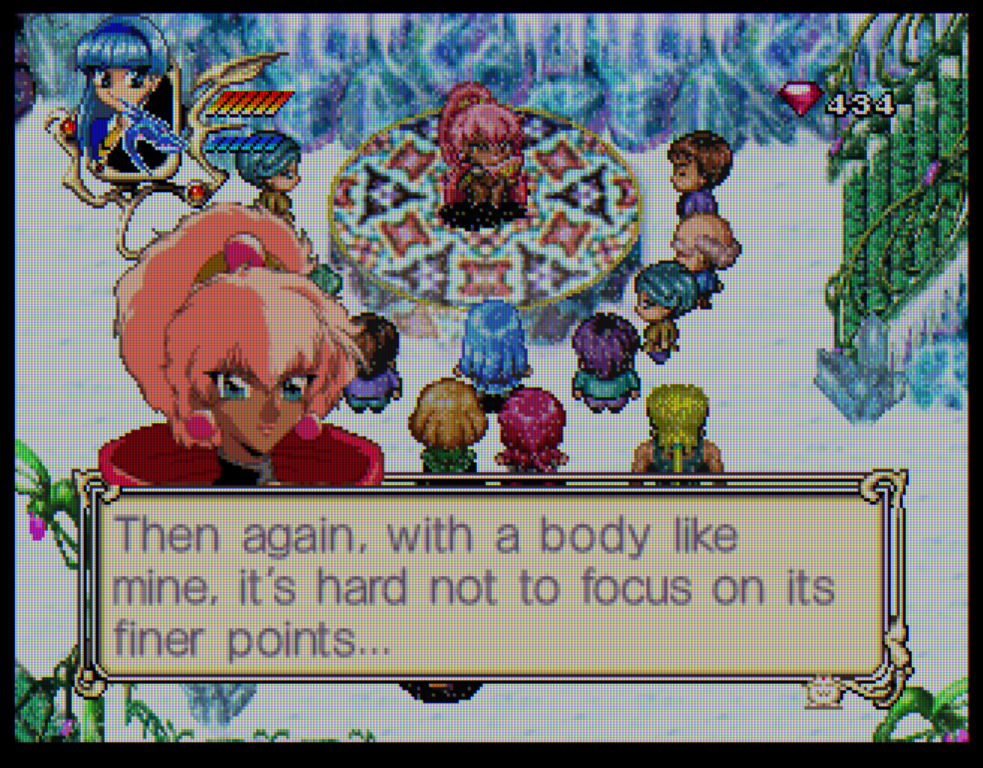 And for a good reason

Complementing the graphics is an impressive array of anime cut-scenes and cinematics that do not always work. Somehow, the voice acting in the in-game scenes is miles better than the anime cut-scenes. That brings us to the VS, which is surprisingly decent, except when it is ill-served by some unnatural lines in the script.

The same cannot be said about the music, which is really the only thing that should have been made up to the increased standards of the Saturn. As it is, few tracks are memorable, and it just reminds me of how little I liked the Genesis soundtracks compared to the SNES.

As the last game released on the Saturn in North America, the game symbolizes a lot of what went wrong with the console. Released late because Sega worried about marketing a 2D sprites game in the midst of a technology race, Sega instead bet on the Saturn's weaknesses instead of its strengths.

Looking much better than the games that were developed after it, and perfectly adapting the heart of its anime source, Magic Knight Rayearth somehow became the rare good adaptation. Although limited in its gameplay, and you can feel areas where it could have been better, I had a good time finishing the game. 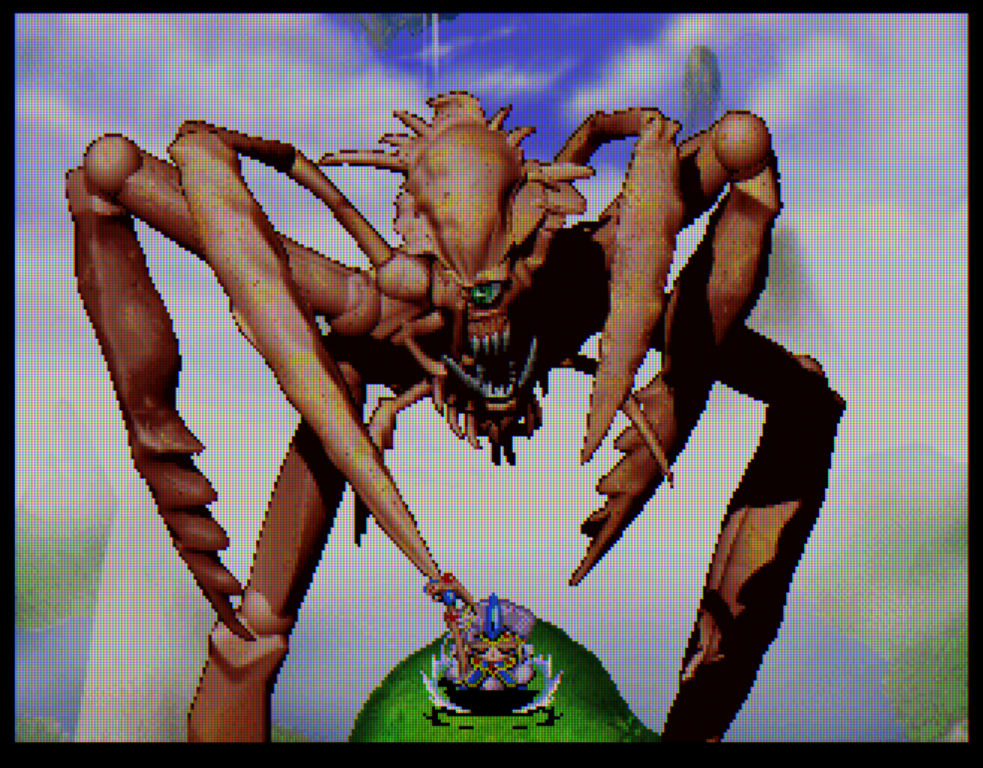 I AM GOING TO OPEN YOUR SKULL AND MELT YOUR BRAIN

1- Depend on Fuu's Heal magic instead of potions.
2- Fuu's charge attack is your go-to in times of difficulty.
3- Make sure not to let any character die, because they cannot be healed for the rest of the dungeon.
4- There always is a health fountain before a boss. 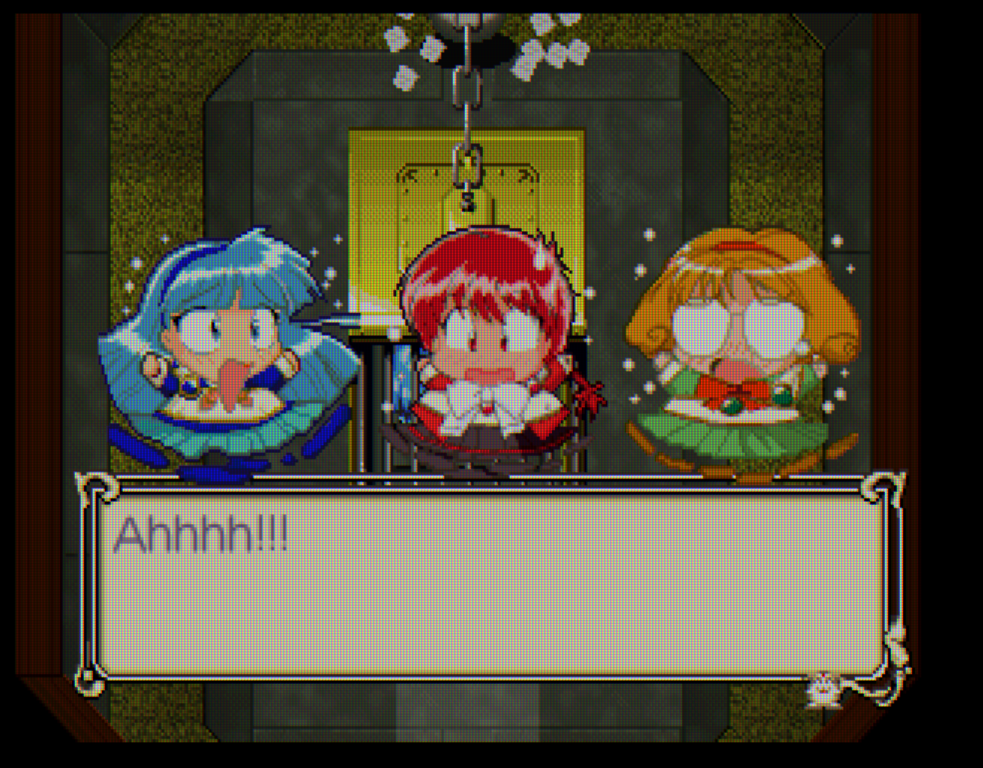 They are just so dan cute

I don't think I would have enjoyed a magical girl game back when I was a kid, not as much as I liked the game now.

Next on the list would be a report review of the games from 60 to 51, since the rest after Magic Knight Rayearth are games from genres I don't usually cover. Still, I will try and give each game a try.