Yes, yes I know what is currently on your mind reading this – Skyrim in 2021? Really? Is anyone still playing this game? The answer is yes – me, I just finished it. I have to admit that this game has never appealed to me personally, although almost everyone in the world of videogames considers this game a cult classic. My brother, who has a nice couple of hundreds of hours recorded on the game is the exact opposite – he loves this game and sice we grew up in one room I can still remebmer how I woke up to – Dovakhiin!! every holiday morning. Obviously, I knew about this game and I also knew that it is on Nintendo Switch, whis is a platform on which I currently play games, but I was never tempted to buy this game. And I would not buy it to this day, not becasue I dont like the game but because it is possible to play it on every other platform and therefore buying it on Swtich brings only one benefit – playing Skyrim anywhere (killing the dragon in the toilet is quite excited in my oppinion). But everything changed when my brother gave me this game for Christmas.

At first I thought to myself – hmm okay, I dont have anything to play anyways, I will spend some time playing this game waiting until the new Zelda comes out or maybe Silksong (Pleeeease Team Cherry, the world really need another one of you games), and then I will add this game to the collection on the shelf and will probably never open it again. Oh boy, how wrong I was. The game caught me in its sticky hands from the first moment. Many people compared the game to Breathe of the Wild according to some similarities – they are both sandbox games with nice visuals, side missions and a huge number of possibilities. And since I absoultely loved BotW it was no surprise that Skyrim would make a possitive impression on me.

To be completely honest, I did not know much about the game and didnt feel like searching everything on the Internet forums right away (later it was necessary) which basically spoils the whole principle of discovering the game´s world. So I did exactly what I was doing in BotW – ran around the map discovering, talking to NPCs, taking side quests, looting chests and killing everything that did not kill me first. I spent a good 20 hours playing this way, did not think much about what I am exactly doing, just running, discovering and enjoying Skyrim. And I have to admit, I probably enjoyed this phase of playing the game the most – everything felt so new, unexplored and exciting.

As I walked around different new cities, quest began to appear similar in some way, some connected to each other or otherwise overlapping – that was the time I realised there are unique questlines. I completed every one of them expect the Dawnguard (explained below) and personally enjoyed the Dark Brotherhood questline the most. They all felt interesting and original, none of them was not too long and none of them felt clichés. Each of them brought its own story and characters. Each of them forced me to play in a slightly different way, thus changing my playstyle – whether it was stealth action in Dark Brotherhood or Thieves Guild missions or a complete go hard or go home  style in Liberation of Skyrim  of Companions missions or even waving with wands and using various spells in missions for the College of Winterhold. My least favorite was playing mage and had the most fun playing assasin, but mostly I still played One-Hand style with a sword in one hand or in both. Unfortunatelly, the main questline felt a little bit off, did not blow my mind at all and felt like the weakest part of the game honestly. Maybe because I played it almost at the end, I dont know but it feels kind of stupid and funny at the same time – playing main questline just to know what is it about.

Probably the most iconic thing about this game, which I personally enjoyed very much, was the leveling system. This system suits exactly to players own playstyle, progressing on skills you really use. The level of each skill increases because the player plays the game in his preffered style, which in my oppinion is incredibly sophisticated way to make leveling in game interesting. There are also a few abuses and I abused this system a bit when I spammed Muffle like a mad man for very fast progression in the Illusion tree, leveling my character rapidly at the same time. Besides that, I can not really blame the system for anything.

Weapons and other equipment felt the same way. I could choose any weapon I liked, melee or ranged and also apply my preferred enchantment to it, wether it was lifesteal or fire damage, there were endless possibilities. As for weapons, I recommend Mace of Molag Bal, which I found very useful, as it was relatively strong weapon with unique effect of trapping souls in soul gems, which I later used for enchanting. My other very commonly used weapons were Nightingale Blade and Nightingale Bow both with great damage and effect. In the later stage of the game, I used Bloodscythe and Soulrender as these two were made for Dual Wielding playstyle which I really enjoyed. At the end of the game, I crushed everything with my legendary Master Sword enchanted with life steal and fire damage and Hylian Shield with frost resistance and HP bonus, but these weapons required a high level in Smithing and Enchanting.

No game is perfect, and unfortunately while playing this game, I encountered many bugs that quite ruined my overall impression of this otherwise great game. I did not actually mind those small ones, but rather the big ones. The two biggest I came in contact with were the Bloodline quest, where I simply could not progress trough the gate in Castle Volkihar, so basically the entire Dawnguard questline became inaccessible to me. The second one was finding Varona in the Relucant Steward quest, where the quest indicator was somewhere on the edge between Skyrim and Solstheim, basically out of map. Due to this bug, I could not complete the quest which meant that I could not get to the last Black Book. In addition to these, there was another one where I could not use Glemoril Witch´s head as a cure for lycantrophy (imo very useless ability). All of these problems could be solved using console on PC for example, but since there is no such an option on the Switch I was basically hopeless. And then there were some small things that were extra annoying like frequent game crashes, NPCs constantly blocking my way or me getting stuck in every possible place in the mountains.

My overall feeling about this game, despite the bugs that quite considerably ruined it for me, is still good, I have definitely played better games but I enjoyed it. I have to emphasize the small things developers did for Switch players, the optimalization was on point and I really liked the idea of putting Master Sword, Hylian Shield and Chamion Tunic to the game as a tribute to BotW. So to sum things up: in the world of Skyrim, I spent decent 121 hours, completed 135 quests (not counting the miscellaneous quest), reached level 72 and at the end fought probably the strongest NPC the game throws at you (even tho you have to acctualy find this one). As for collectibles, I collected all 24 Stones of Barenziah and all 14 Dragon Priest masks. After completing these points, I felt like there is nothing that holds me in the game anymore, so I saved it for the one last time and gave it my imaginary mark: Completed. 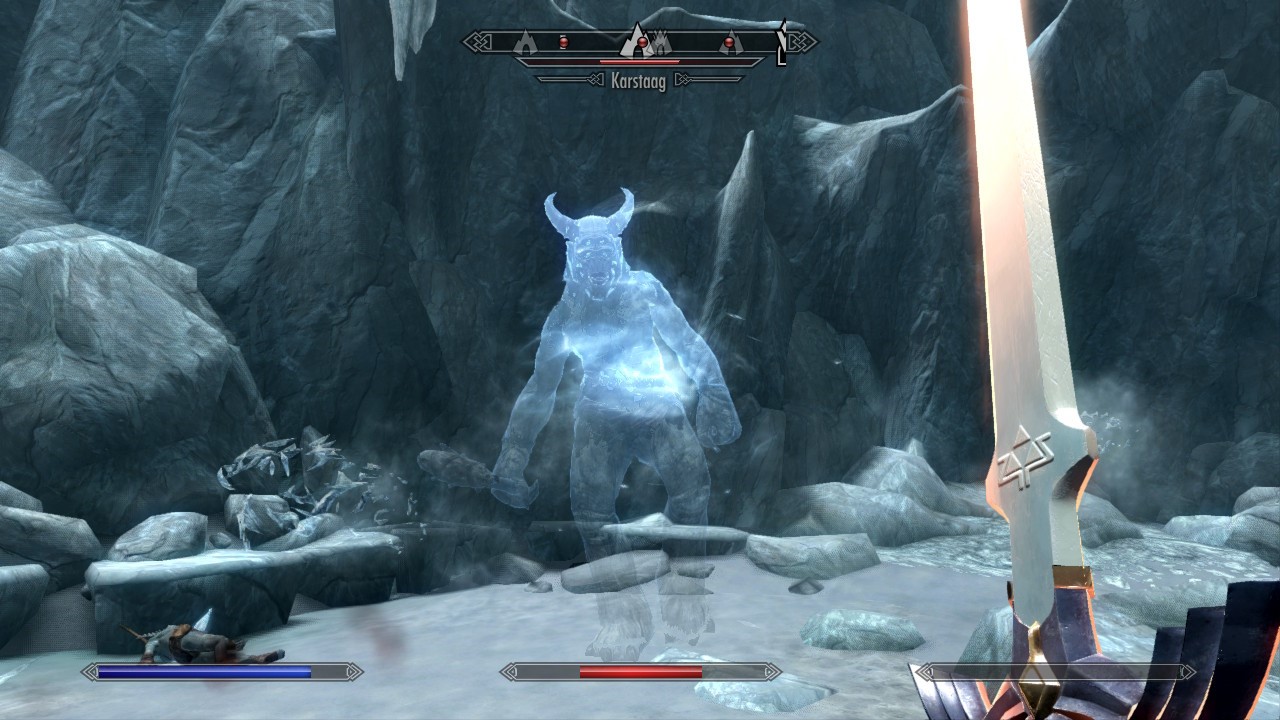 My name is Tomas. I like videogames, sports and food - the only three things worth waking up for. I also like to give my honest opinion and discuss things, that is the main reason I started blogging.
I adore Nintendo games as for me they are the true expression of having fun in video games. Currently playing most of the games on Nintendo Switch as I travel a lot and i find it the best way to spend a long way home.

Save the bugs!! (and fix the bugs in any other game please :D)