8:44 PM on 11.06.2012 (server time)    0
In the world of mmo's game mechanics often take the passenger seat to a skinner-box theory of game design. The notion that you have to do one repetitive task over and over until you eventually get a reward. Kill 100 mobs to get a level, Collect 1000 pieces of iron to get a new sword, get gear, get better gear, get even better gear. Anything to keep the player invested for a long period of time, with little reward actually given, yet tons of incentive to keep going. If you just level up twice more, you can use that sweet new shield. So you do, and you use it, and your happy. If you just kill that one last boss, it might drop that last piece of gear you need to complete the set. It does, and you move on to getting a whole new set of gear. It's an endless cycle of tedium. Often called the gear treadmill, it's constantly running forward without getting anywhere.

Generally mmo's find a lot of people wanting more, which is because the game design of them has been purposefully warped in such a way that it keeps people playing for thousands of hours, and keeps people paying thousands of dollars. Because of this, a lot of mmos take a hit in other areas to support that monetization model. Things that don't lend themselves to that golden chalice of continued support.

Guild wars 2 changes all that.

At it's core. Guildwars 2 well seem very familiar to world of Warcraft, or Everquest 2, or Final fantasy 14, or any other mmo. The art style is somewhat reminiscent of WoW(World of warcraft), there is that grand scale of things like in EQ2(Everquest 2) and to me the story and theme of the game feels a lot like FF14(Final Fantasy 14). But what GW2(Guild wars 2) does that WoW, or FF14 doesn't, is nail game mechanics. 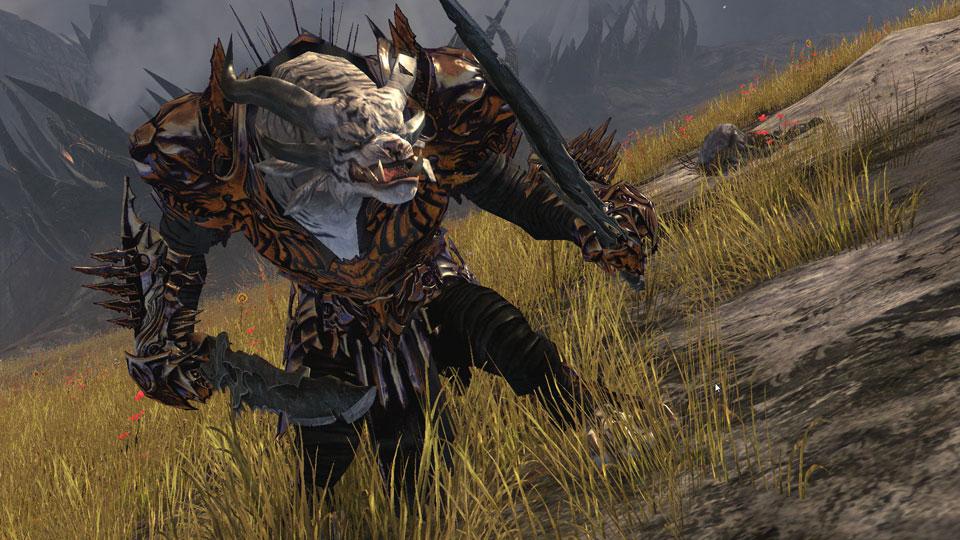 The main thing that is different, and what becomes immediately apparent, is the combat in the game. Movement, positioning, and dodging take precedence over the standard all out dps(Damage per second) fire fights of other mmos. (*Note. When I say other mmo's, let's just assume I'm talking about WoW, because I have the most time investment in that mmo) The way the game is played, at a fundamental level, is completely different. You are not spamming spells, over and over, just to kill a boss. In GW2, the game is more about, dodging enemy attacks, healing yourself, putting on some buffs, getting a few attacks in, and then repeating that process. 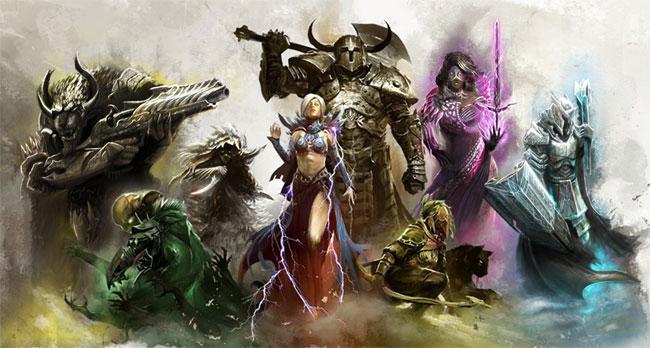 Almost all attacks require no target, rather, they are cast when you press them, and need to be aimed. Again, the emphasis in all this is on position. You need to be free of obstacles, need a line of sight, need to be the right distance. It's all daunting at first, but the battle mechanics in GW2 are brilliant. Add on top of all that how fast paced the game is. Where in other mmos you'd fight a boss who might have a few phases, each with a unique 'twist' to them, in GW2 those bosses are similar, but because the combat is so loose, fluid, and fast, the 'twists' come up a lot more often.

For example, there is one ogre-like boss, who has a giant mouth where his belly should be. You fight him in a giant arena, and he vomits fire balls at you that you have to dodge (The fire targets you so you must dodge, or take a lot of damage). Then he'll send a shock wave out in front of him (you'll have to be in a position to avoid that). Finally he well start to suck in air from his belly-mouth. You have to pick up the vomit fire balls, and throw them into his mouth to stop him, else he'll do a large area of effect attack (you'll have to be near the front of him to get a good throwing angle, see the pattern emerging here?). These 'twists' happen a lot. It's a lot of fun, it keeps you on your toes, and most importantly, the game mechanic of a regular mmo, where you are concerned about damage metres, is subtlety shifted to an area, where you are having more fun fighting bosses and enemies because the fights are more engaging, because of the mechanics of the game. It's not a focus on damage, it's a focus on fun boss fights. It's brilliant. 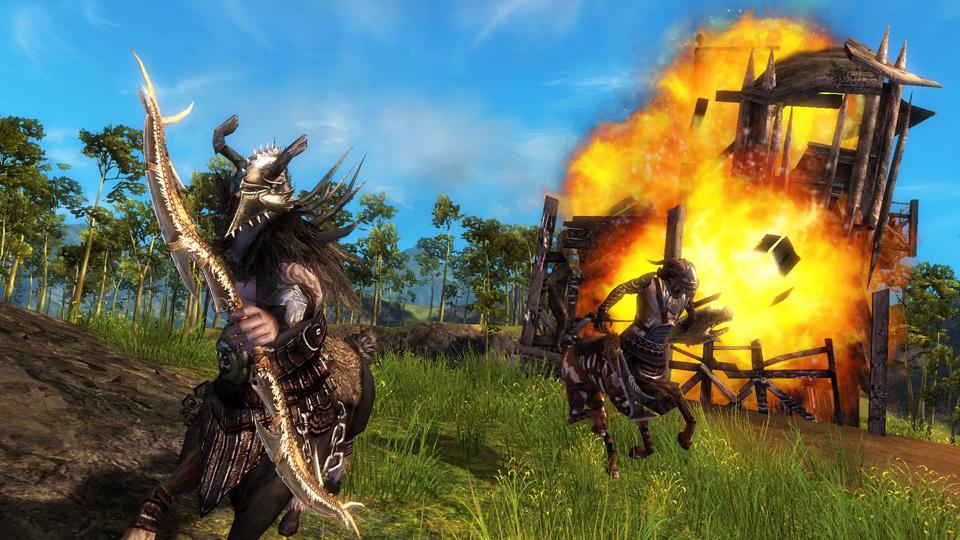 The other piece of the puzzle here is the platforming mechanics. Jumping, probably one of the most important things in an mmo, Is implemented extremely well in GW2. So much so that the game has jumping puzzles built right into it, with rewards at the end. Arena net really knew they hit something special, and it shows.

The problem other mmo's, and platforming games have, is either a lack of control, or too much control when you jump. The jump might feel off compared to the tone of the game. For a game like Killzone, The jump feels laboured, heavy, you don't jump very high or far. It's spot on for the game, and the mechanics for jumping in Killzone are great. For a game like Jak and Daxter, the jumping feels tight, not floaty, but nice and high, and very predictable, which is exactly what you want in a fantasy platformer. Where a game like Limbo, you can never quite tell if a high jump is going to end in a fall-death. It wasn't quite high or fast enough, or maybe it wasn't low and slow enough. It's hard to tell, but while limbo might be a fantastic puzzle game and amazing visual experience, it's platforming was lackluster. That right mix is a difficult thing to get, but GW2 nails it.

The jumping in the game is nice and high compared to your character. It feels like you can jump really high, but not unrealistically so. There's no double jump, or extra height mechanic, because even with the game being a fantasy one, its built in such a way that it's grounded in a realistic way. Gravity, jump height, speed and length of jumps feel spot on. You have a decent amount of control in the air (You can juke right, and left in the air, and then back again, think megaman). The platforming mechanics in the game are spot on, and it's a ton of fun to do platforming sections.

There is a lot to say about any mmo. The design choices are what people usually talk about. What the world looks like, the type of content, the basic design principles of the game, to the over arching design through the entire thing. How parties work, or how dungeons work, and in an mmo, more then any other game, these are extremely important things. GW2 has a lot of excellent design choices, some maybe aren't as strong as others, but GW2 has such strong game mechanics, and ones I enjoy so much, that I don't think I'll stop playing it for a long time to come.
#ShareonCommunityBlogs
Login to vote this up!