9:14 PM on 03.16.2010 (server time)    0
So, I�m starting my blog with a shocker; I don�t like Metroid games. This probably isn�t surprising to many of you, but only because you read the title. So that doesn�t really count. But, you know, that�s sort of understandable; no genre is liked by everyone. What is odd is that I actually like Metroidvanias, just� not the Metroid ones. I�ve played Metroid Prime and Metroid II, and I�ve beaten Fusion, Zero Mission, and Super Metroid, so I think I�ve played enough to get the general feel of the series. I�m still not entirely sure why I like Metroidvanias (I�m specifically referring to the post Symphony of the Night Castlevanias, but the genre�s pretty good too), but not Metroids, but I have some ideas.

The bosses in both series are great, though. That won't be coming up.

For starters, there aren�t many enemies. I know this is part of the Metroid formula; part of it is about how alone you�re supposed to feel, so there aren�t many enemies. Another part is about how it�s supposed to feel like you�re exploring an alien environment, so the enemies aren�t actively attacking you; they�re more like animals, fitting into their natural environment until you disturb them. The problem is, I don�t enjoy that. If I wanted to feel alone, in an alien environment with only alien fauna who couldn�t care less about my presence for company, I would go down to the basement and be in the general proximity of my cats.

Heh. Because cats are jerks.

Except for this one. He's awesome.

Anyway, killing enemies is fun. Perhaps I�m comparing apple to oranges, because Castlevania has a different formula; you�re supposed to be storming the enemy castle, killing everything in sight, sending Dracula�s minions back to the deepest depths of hell, and Metroid�s formula is different, as I�ve already stated. But� well, I like Castlevania�s formula.
So, onto the next problem. The exploration, the bread-and-butter of Metroid games, isn�t very fun. In Castlevanias, the background changes, as do the enemies. You know when you�re in the catacombs, in the clock tower, in some other, third area; each place has a certain feel to it. That�s� kind of there in Metroid, but it�s not very strong. In my opinion, anyway. Castlevania has widely varying areas; you�re exploring an entire castle, whether you�re going through the deepest depths of its dungeon, or climbing to the tops of spires, or going through that goddamn clock tower. Well, no game is perfect. Each area also has its own enemies, too. With the exception of the omni-present bats, no enemy particularly fits its area, but that�s okay; they�re all incredibly different, and sometimes the enemy choices are just as integral to an area as the level design itself. When you see medusa heads, you know you�re in the clock tower; when you see killer fish and sea monsters, you know you�re in the� water�area. Okay, that comparison didn�t work out so well, but I stand by my previous statement.
Actually, now that I think about it, the downed spaceship in Super Metroid was kind of cool. But not much else was. With the exception of the fallen spaceship, and a few isolated incidences (that one desert-ish area right before Mother Brain) nothing really stood out. You�ve got a blue background, a red background, that weird bubbly background, and some others I can�t remember. Enemy variety can help this, but that�s not what Metroid is about. 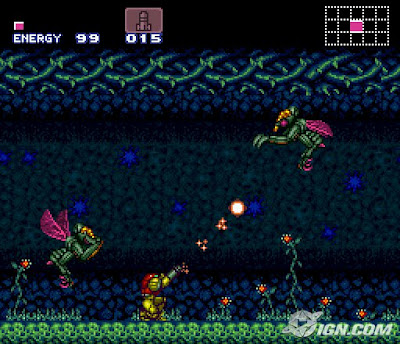 This environment is greenish-blue, and I'm trying to do that thing where people have commentary on their pictures


There�s another problem, though, that I�m not really sure how to explain. Exploring in Castlevania just seems more� natural, somehow. It�s usually at least somewhat clear where you�re supposed to go, even if it can be murky at times. Metroid is less so. There�s quite a lot of wandering around wondering what the hell you�re supposed to do, and less kicking ass and taking names. The teleporters in Castlevania also make things more enjoyable; the castle is huge, so it helps to have a faster way to traverse it. Even if you�re backtracking all over the place, it�s faster than it could be. The backtracking in Metroid, which is quite frequent, takes a really long time. And, as I�ve mentioned, I get lost a lot in these games, so I end up backtracking over the entire map, which is quite an ordeal.
So, that�s why I don�t like Metroid in general. These rules mostly just apply to Zero Mission and Super Metroid, but Super Metroid is considered the best Metroid, and one of the best games ever, so I figure it�s a good comparison. I have a list of reasons why I don�t like the others, but as I�m writing this in Microsoft Word, it bumped up the length to five and a half pages, and it�s still not quite done, so I decided to cover that in later posts.
Questions, comments, advice? Also, whoo! First post!

And would you guys classify this as commentary or rant? I'm kind of new at this.
#Community
Login to vote this up!